April sees an exciting new initiative from Transition Network, the launch of our own fragrance collection.  All the celebrities are at it, so in our push to help make Transition Network more financially independent as well as to broaden its mainstream appeal, we have teamed up with the people at Estée Lauder to launch a new range for the Spring.  Chanelle La Touche from Estée Lauder says:

“We are thrilled to be collaborating with Transition Network in this way.  To us, Transition says chic, it says, resilience, it says inspiration and independence, and that’s what we have captured in this new range.  We like to think of this as “the perfume of just doing stuff””. 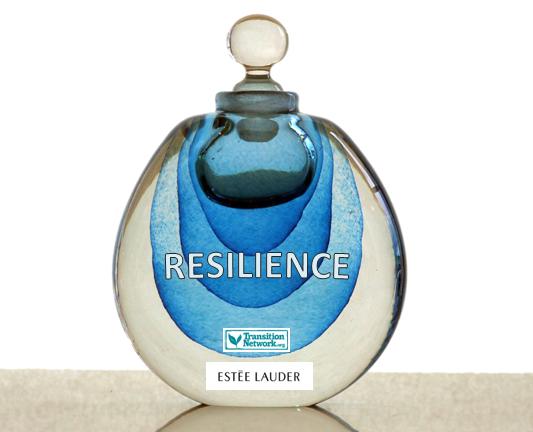 “Resilience”: styled to capture the spirit of Transition, a perfume that bounces back and which captures a dynamism associated with this beautiful international movement.  The composition is announced as Mediterranean, fresh and sensual. It opens with accords of mint, lemon and spicy ginger. The heart of geranium and lavender is laid on the base of woody notes.

“Wedded to Wellbeing”: captures the delicate insights of inner Transition, a deeply grounding blend of autumnal musks which float like an autumn afternoon, rich with lavender and cinnamon, a rich aroma which pays due attention to process and dedicates as much of its dynamism to being as to doing. 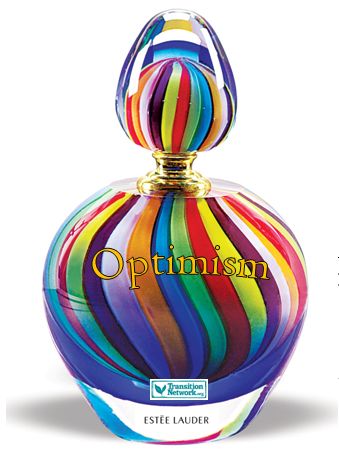 “Optimism”: A powerful parfum which captures the quintessential sense that anything is possible.  Top notes of this new fragrance incorporate juicy scents of apple, quince flower and freesia. The fragrant story continues with central notes of iris, gardenia and peony. The composition closes with musk, cedar and sandalwood, framed with a rich tone of fresh truffles.

“If Transition is about anything, it’s about not doing what’s expected of you.  I can’t imagine anyone would have seen this coming, and we love the playfulness of it. It’s also going to make us loads of money, which is great”.

Transition initiatives from across Europe are playing their part too.  The ginger that features in ‘Resilience’ is being grown by Transition Town Worthing in a series of greenhouses heated using waste heat from a local swimming pool.  The lavender that underpins “Wedded to Wellbeing” is being grown by Transition Finsbury Park on land recently offered by the local council, as well as on the local underground station platform.  However, the plans of Transition Salford in Manchester to cultivate the truffles needed for “Optimism” ran into trouble when the tunnel they had lovingly dug to create the ideal underground growing conditions was used by local criminals to rob their local branch of Tescos.  At least, that’s their story.  10 members of the core group are still in custody.

The range was initially launched in Milan two weeks ago when Rob Hopkins visited the city to give some talks about Transition and also to launch his own men’s skincare products range at the Milan Fashion Week.  “Transition could be viewed”, he told Vogue, “as tools for moisturising your community, bringing out its best side, bringing out the best in what you already have”.  It is understood that in some Italian department stores it is now the best selling range.

The Transition Network/Estee Lauder range go on sale this week in Debenhams and John Lewis.