When Rob asked me to recount my “Stepping up” moment, I immediately experienced that stomach lurch again that is probably more familiar to you in moments of utter panic when you realise you’ve tripped and are about to tumble down the stairs, or when you’re going too fast to take that corner without crashing; so I was reminded of my “Peak Oil Moment”.

It all happened in an old marquee on a sunny day at the Big Green Gathering in 2007 as I was listening to a nice man with an infectious grin, telling me in a strangely entertaining way that the world as I knew it was about to end. Or so it felt at the time. I vividly remember the slide of Asterix and the magic potion Rob Hopkins used to illustrate how fossil oil, this stuff that we were all taking for granted, was almost just as magical. 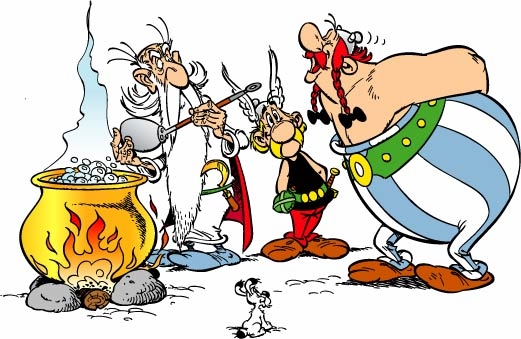 He told us how no other fuel came close in energy density and ease of use. He pointed out that our economy, our life styles and our food production and distribution system were all totally dependent on the ongoing availability of cheap oil and that it wasn’t an unlimited resource. Indeed, he said, we were just about to run out of the easy to get stuff and as a consequence of “peak oil” we would experience huge changes in our lifetime. This was the first I’d ever heard about peak oil, but the logic of the argument seemed beyond doubt and the realisation of what the consequences would be, hit me like a sledgehammer.

A little while later I found myself standing outside that tent, blinking at the incongruously bright sunshine and somewhat wobbly on my legs. The rest of the day had an unreal quality to it while I was trying to integrate this bombshell of information into my existence. I thought about how it would affect my life and more importantly, my children’s future. At some point during that day my friend Mandy steered me into a “Despair to Empowerment” workshop and I think that was the single most serendipitous thing that could have happened. We visualised the future, talked to our descendants and it became totally clear to me that not only, as a parent, did I have the responsibility to take action, but with Transition as a model, I also now saw how it could be done.

The next years became a blur of frantic Transition related activity; I joined the local Transition initiating group and we ran an amazingly successful awareness raising campaign. My husband and I took on an abandoned market garden and dug and mulched it back into productivity.  There was so much to learn; the pile of books next to my bed grew and grew, I went on quite a few courses and became a Transition trainer. I trained groups in several countries on how to bring transition forward in their communities. With a seemingly endless demand for trainings to deliver, talks to give and meetings to go to, I was run off my feet and my family was suffering from my absence. The other members of our Transition initiating group were equally run ragged and after a rushed “Unleashing”, our local transition initiative now slumbers.

By now I had come to realise that “transitioning” to the new paradigm was not going to happen overnight. The urgency that followed my peak oil moment has matured into a cold resignation that I’m in this for the long run and I have found a more realistic pace, which I imagine, I’ll keep at for the rest of my days. After a period of relative quiet in our area, it now looks like transition-y things are stirring again and I’m ready to join the others who, just like me, will keep plodding on to help bring about something a whole lot better than austerity.