Tell us about your Transition initiative in 20 words: Our Transition Initiative is called Urban Transition Cities Movement (UTCM). It is an intergenerational and multi-disciplinary movement that integrates informal, mediating, and formal service delivery units in a vertical and horizontal manner.

What, or who, was your first encounter with Transition? My first encounter with Transition Towns was in 2009 when I met Tina Clarke in Pittsburgh during a Transition Town Training. I became very interested in the model and connected to the twelve steps highlighted in the model and framework encompassed by Transition.  Despite my affinity for the existing Transition Model, I perceived that its application in urban settings would require the adoption of cultural context and principals of diversity.  Developing local talent, particularly people who have survived inexcusable disparities, to a point at which they could embrace the issues of Peak Oil and Climate Change constituted a paradigm shift for both them and the Transition Model. Transition Towns is a very powerful and thought provoking model, one that requires the establishment of a sense of self and well-being before it can be totally embraced. The Urban Transition Cities Movement is focused on this process, seeking to bridge the chasm of socioeconomic strata in the U.S.A. by exploring the issues of race, class, and economics through hands on, project-based learning that uses a co-design approach. The earth is in peril; 20 percent of the U.S. controls 93 percent of the country’s wealth; while 80 percent of the people hold just seven percent of the wealth. My hypothesis is simply that if the wealthiest 20 percent go net+, it would create a tipping point to reverse the issues of Peak Oil and Climate Change. Therefore, we must pursue a different strategy to achieve this goal and realize systemic change.

After my initial meeting in 2009, I was primarily trained by Tina Clarke and subsequently worked with her. I was introduced to and trained by Naresh Giangrande, Sophy Banks, and Carolyne Stayton.  Since my initial experience in 2009, I’ve been seeking ways to facilitate the Transition Model’s evolution into a version more suitable for an urban setting.  In 2012, when I was trained in the Thrive Model in Chicago, I sought permission from Naresh and Sophie to test an urban version that would inform, educate, and empower vulnerable people to become active change agents in the 21st Century Global Climate Change issue. In the spring of 2012, we launched the first version of Urban Transition Cities Movement; focusing on engaging people of color across vertical and horizontal systems. We had 37 people of color participate in our first effort, comprising local community leaders, stakeholders, non-profit leaders, small businesses, universities, governmental agencies, youth, and public officials.

What do you love about Transition?  I love that Transition is an interactive model, one that is capable of being nimble while maintaining depth and breadth. I love that it connects unlikely stakeholders to explore the world from multiple perspectives, all seeking to resolve Peak Oil and Climate Change issues. Moreover, I love the micro-economics of Transition and its ability to transcend race, ethnicity, class and economics when people examine the real risk at hand.

If there was one thing you would change about your journey through Transition, what would it be, and what would help you do it?   One aspect of Transition that is consistently pleasing is the ability to provide tangible experiences of rural and farm lands to city residents. For both city and rural participants, this experience alone creates the dynamic tension needed to see issues from multiple vantage points.

Having people of color co-facilitate is important in the urban setting. Trust is a slow process that requires grassroots capacity and a long-term commitment not always feasible for many Transition Town Trainers.

When you’re not doing Transition, what do you do?  I’m always doing Transition; moreover, I am always seeking to push the movement to new levels. In 2010, we incorporated EcoDistricts into our Transition Towns effort. This shift allowed our effort to attract some of the best thinkers in Pittsburgh to join with Transition Towns, ultimately helping us create the Urban Green Growth Collaborative (UGGC). At its peak, the UGGC had over 1,500 members and over 70 active organizations working daily with one another to address sustainability issues through strategic and pragmatic planning and implementation processes. In 2014, this effort culminated with Larimer, one of the focus communities, receiving a $30 million Department of Housing and Urban Development (HUD) CHOICE Neighborhoods Award. The funds were specifically designated for building the first urban green sustainable community in the country. Today, I continue to look for ways to push the model and its thinking. We are being influenced by Paul Hawken (Draw Down), Christine Mondor (EcoDistricts), 100 Resilient Cities, and Pittsburgh’s People, Planet, Performance, and Place (P4) effort.  Our work has been supported by Living Cities, Greenbuild, and other sustainability efforts around the country and world, highlighting the capacity of building living structures that are co-designed by community stakeholders through authentic grassroots capacity building.

What one piece of advice would you give someone new to Transition?  I would advise all new Transition stakeholders to suspend judgement of what they know and perceive about people and their differences.  I would push them to explore Einstein’s perspective, “you can’t solve a people with the same energy that created it.” I interpret that to mean, we must promote collective genus though transparency and honoring differences. This requires intentional relationship building through project based learning that deepens everyone’s capacity to trust, build, explore, and transform. 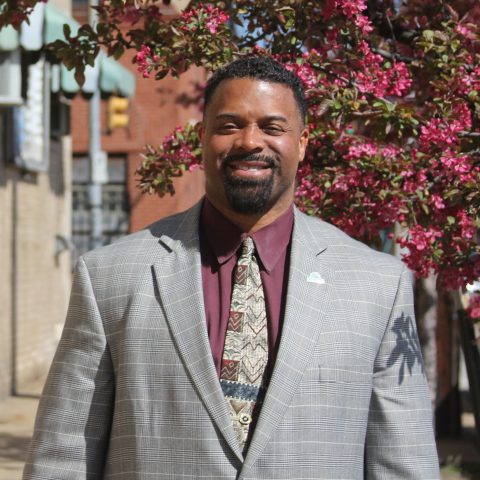