I started Transition Albany in 2009 and – despite that “I” at the beginning of this sentence – our first event was a model of cooperation and organizing as group. Not surprisingly it was also very successful: multilayered, rich, informative and inspiring. We showed Power of Community, and had various community building activities built in, including a competition for the most tasty dish made from local ingredients.

From that time on, we had several years of an impressive (apparently) array of events, a smattering of which (an urban farm tour by bicycle, a couple of movies at the local cinema) that attracted an enthusiastic group, and a six-week Resilience Circle, a third of whose participants became core supporters. With the emphasis on “support.” Many of the Resilience Circle began to meet each others’ needs, but people largely looked to me to take action on outside issues. 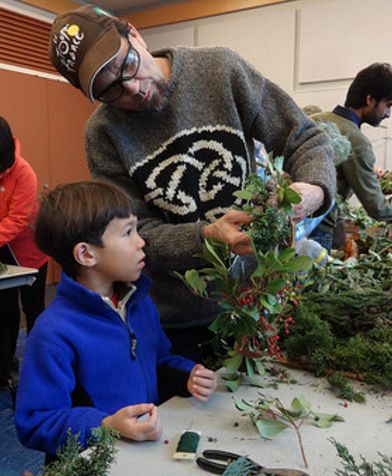 When we “came out” with a Great Unleashing (see right), we found a superb organizer who proceeded to attract a City-backed permaculture community garden project and has organized volunteers to keep it going for over two years. With her I started a group to address unequal access to housing in the community that involved other community groups (a novel concept for me!). TA was also asked to be part of an initiative started by the City’s Sustainability Committee, and I was so excited that we had finally won enough respect to be part of a community-wide coalition.

But my insistence on taking the leading role in our purely Transition activities meant that by the time we got around to looking at a group constitution, the the rot had already set in. I continued to organize more or less monthly film screenings in the free room at the local library, because the information had to get out there, right? I had long prided myself on being able to find speakers for these events at the last minute, but setting up these screenings by myself, or with my faithful husband, was getting very old.

I realized I was seriously over-committed on too many fronts and rapidly burning out. We had a large mailing list but attempts to get people together at a monthly potluck failed and there was little way of knowing how all those people were actually implementing transition values in their lives. It was lonely and exhausting “at the top.”

This summer, when I spent a month with my husband visiting my family in the UK, I sensed I was done with “trying to persuade people to change” and that Transition Albany would have to go on without me.

However, I managed to confuse our return date and we ended up with five extra days in London that led to my meeting Charles Whitehead from Transition Tooting and lots of conversation about our respective efforts. By coincidence, we were able to attend one of their events involving families while we were there (making bug hotels from old plastic bottles,  then constructing natural shelters in the woods of the nearby park), and I brought home a suite of ideas for ways we could get Albany families involved. I discovered I wasn’t quite as burnt-out as I’d thought!

On my return to the US, we had a TA meeting where three people (two of them new) stepped up to design and organize a year-long series of eight events where parents and children could create things together, make something out of “nothing,” and strengthen community.

Our first such event was yesterday, a Winter Solstice wreath-making party (see right) that was a wild success with 50 adults and children having a whale of a creative time. And I wasn’t even there!  My burnout is officially over.