In 2005, a group of Permaculture students from Kinsale Further Education College set a course for how their town of 7,000 people on the west coast of Ireland could transition to a better quality of life while dramatically reducing fossil fuel consumption. Exploring 11 key sectors, including food, energy, tourism, education, and health, Kinsale 2021: An Energy Descent Action Plan laid out a clear vision for their community’s future and identified practical steps that would need to be taken each year to achieve it. Initiated, overseen, and edited by their professor, Rob Hopkins, this plan was soon adopted by the Town Council of Kinsale, and when it was posted online, it quickly spread around the world as people everywhere embraced it as a groundbreaking tool for cultivating community-level sustainability and resilience.

In the spring of 2013, Transition Fidalgo & Friends, a Transition Initiative in Anacortes, Washington, began a similar endeavor. Starting at one of their monthly Seventh Generation Suppers, which was attended by sixty people, group leaders encouraged participants to freely imagine the best possible future for their community in the year 2030 in light of potential energy constraints and increasing impacts from climate change. 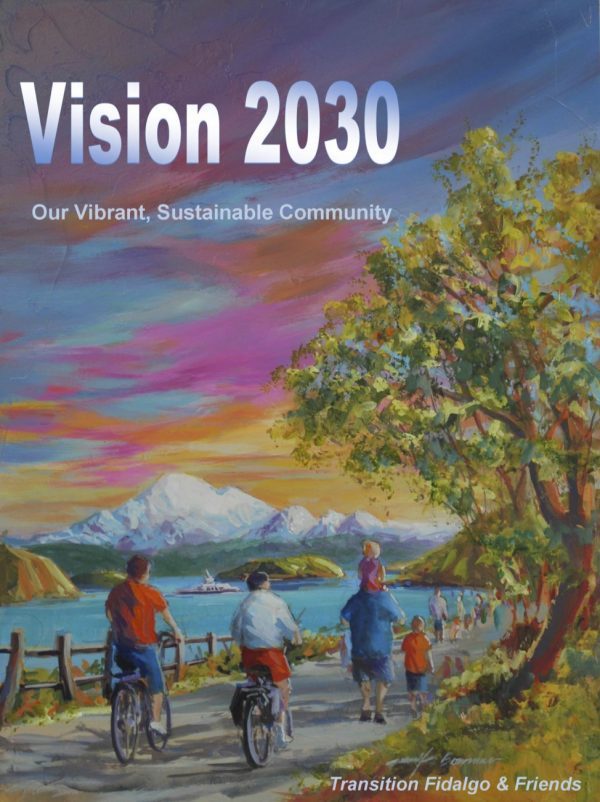 “Our members had been involved with projects that covered a wide range of interests that were deemed to fit Transition Fidalgo & Friends’ mission and goals (which are quite broad),” recalls Eric Shen. “But we had not yet spent the time to collectively think about what we wanted to see for the future of our community. That need was what launched the Vision 2030 project.”

Evelyn Adams, a local wildlife columnist and author, largely motivated by her anguish over what climate change was doing to the natural world, helped form “Skagit Beat the Heat” in 2006. This group was later renamed Transition Fidalgo & Friends in 2011. Although it had already engaged in numerous projects to educate and inspire its members to work together for positive change, Transition Fidalgo & Friends’ Board of Directors seized on the the example of Kinsale’s Energy Descent Action Plan and attempted to adapt its approach to their local community. 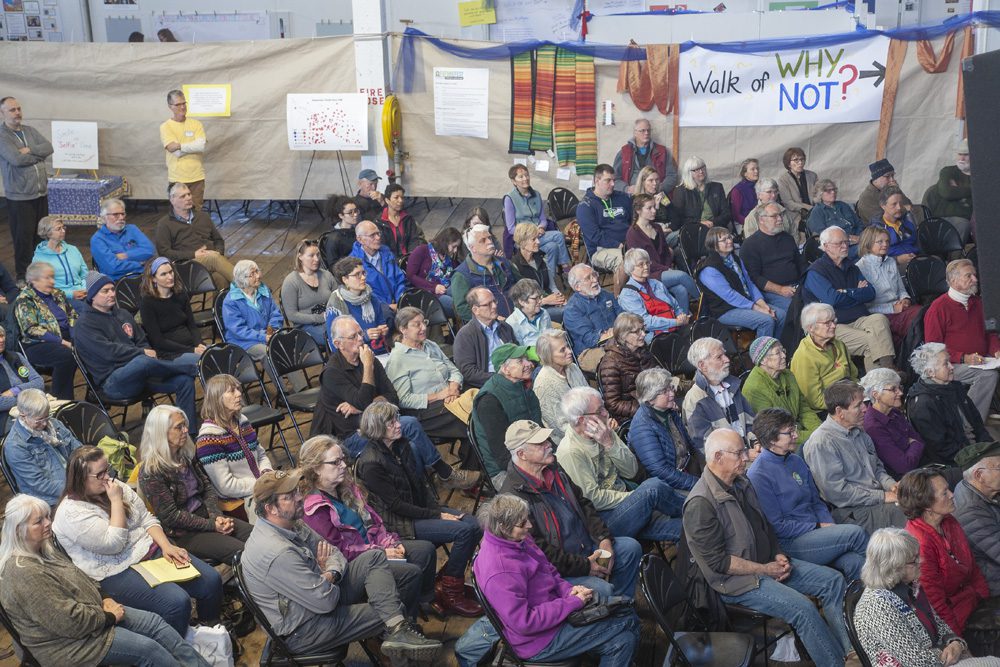 “It’s vital to have a star to steer by,” observes Adams, “a positive, achievable vision to pull us forward. But we not only set out a vision and the road to resilience – we also provided climate and energy facts and projections. We believe it’s critical that not only Transition Fidalgo & Friends members understand the difficult days ahead, but that as many people as possible in our community know what we’ll be dealing with.”

Even as they began this process, local residents were already reeling from the impacts of climate change. Ocean acidification was affecting shellfish operations. Glaciers had been shrinking. Droughts and stifling smoke from wildfires were becoming more common. Since the community had long-relied on jobs and revenue provided by two local oil refineries, it was difficult for those who were so intimately dependent on the oil industry for their livelihoods to accept the need to reduce fossil-fuel consumption and transition to a more sustainable way of living.

“By putting down on paper what Transition Fidalgo & Friends felt the future could look like, we were able to convey to ourselves and others in our community the specific goals we were trying to accomplish with our organization,” says Shen. “The project forced us to really think through the coming challenges, what was possible for the future, and then outline a plan to accomplish that.”

After some initial brainstorming, committees formed to work on each section of the plan, including energy, neighborhoods, food, emergency preparedness, natural resources, physical and emotional health, transportation, and a thriving, sustainable economy. Their three-step process for how to develop each section involved: 1. a vision for what a low-carbon, resilient Anacortes might look like in 2030, 2. a credible basis for that vision, and 3. suggestions for how to achieve it. A small task force was created to look over all of the ideas generated by the committees, and Adams and another writer took on the arduous task of turning everybody’s work into a compelling and actionable document. 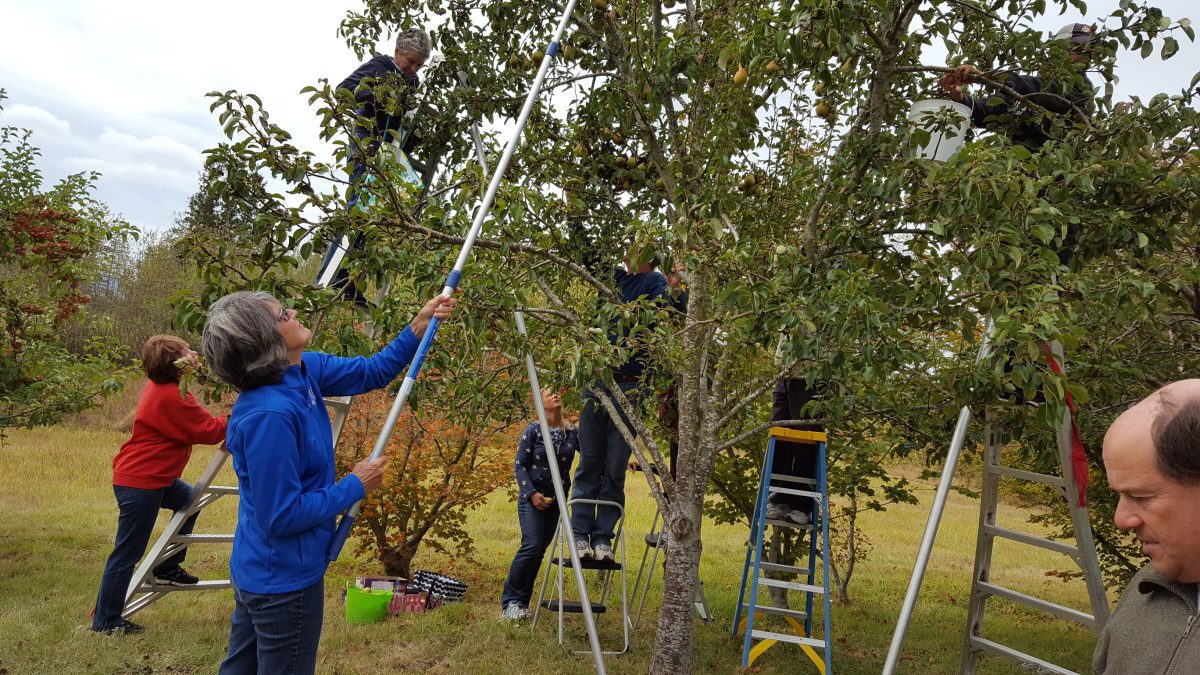 Now that Transition Fidalgo & Friends has made Vision 2030: Our Vibrant, Sustainable Community freely available on their website, Adams encourages other groups to follow their example to design similar plans for their local communities:

“Just take the plunge! People love to think and talk about what makes for a great, strong community, and about who we can be together as we face a hugely challenging future. Make it a festive occasion, take excellent notes, go ahead and use our format for your own vision plan if you like, and most of all, don’t go through all that effort and then let it sit on a shelf!”

Since first publishing Vision 2030 in 2014, Transition Fidalgo & Friends has referred to it regularly as they have continued to engage their community in working toward a more resilient future. As a result, they have started Fidalgo Island & Guemes Gleaners and will soon be launching a project to monitor changes to local forests due to global warming, overuse, invasive species, and other human-caused disruptions.

Furthermore, Transition Fidalgo & Friends’ free, two-day FutureFest, held on Earth Day weekend in 2018, highlighted many of the ideas contained in Vision 2030, such as the need for emotional resilience, affordable housing, new economic pathways, and care for the natural environment. This event, following its theme of “Building the World We Want,” also invited community members to generate their own ideas and share examples of programs that are thriving in other locations. It even featured a Grove of Life installation, patterned after one created in 2017 by Transition Initiatives in the Twin Cities of Minnesota.

Without a document like Vision 2030, the challenge of guiding a community through this era of climate chaos can seem overwhelming and individuals may feel powerless to participate in a meaningful way. However, with an understanding of the impacts that will result from climate change, a clear vision for the future, and recommendations for how to successfully transition to a more sustainable way of life, many have become newly empowered and steadfastly committed to this work.

“By putting into words what our future can look like, we, as a community, are able to work towards that vision,” concludes Shen. “By laying out specific goals and actions, people can take practical steps towards them.”