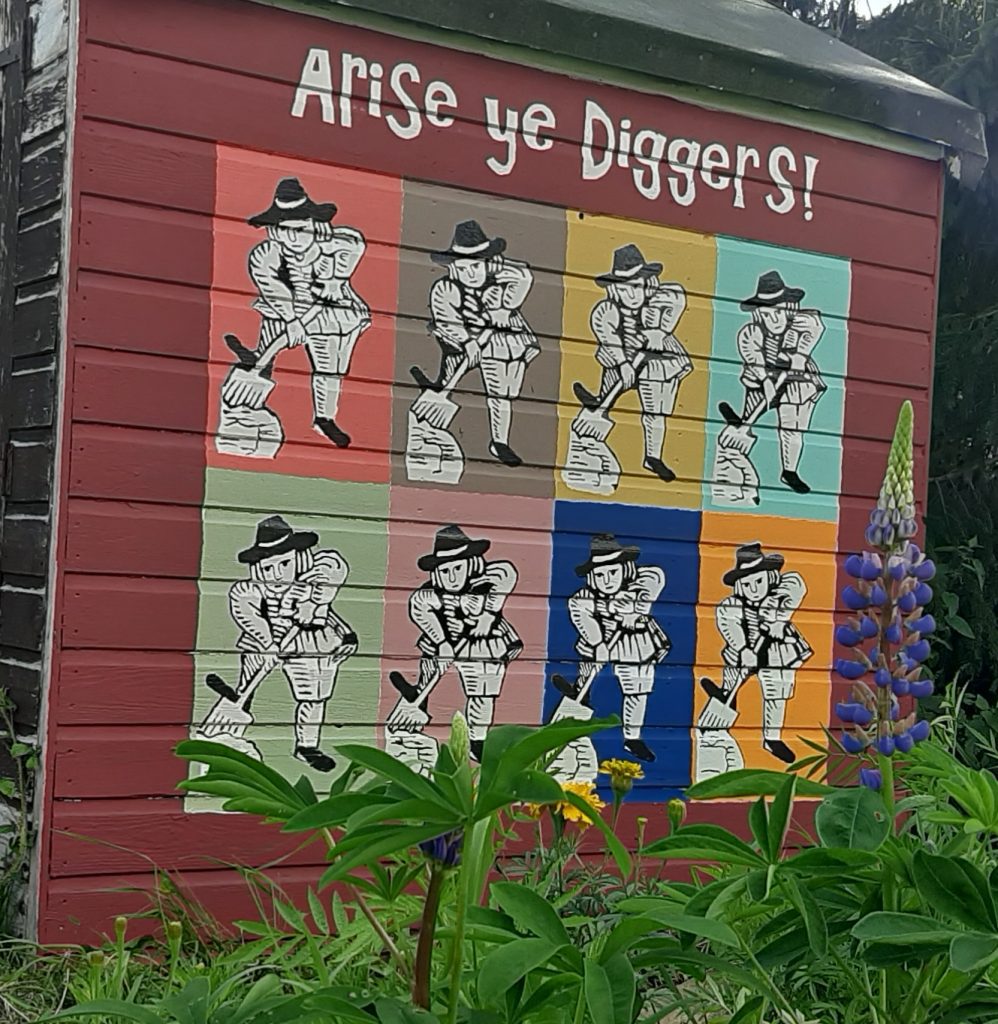 When the current crisis began Bolton Diggers had to make some difficult decisions, most of which were out of our hands. We manage four community gardens, one community centre and a refugee cooking project feeding 150 people a week at a church centre. The first thing to be closed was the refugee feeding project as it is embedded in a local charity’s drop-in within a large church hall and, amongst other things, the risk to the drop-in’s elderly volunteers of so many people mingling together meant its immediate closure and hence as a knock on effect, of our feeding project too.

Next, one of our community gardens was centrally a food growing teaching project for refugees so this had to be closed. Then we had to look at our community garden based at our centre which is run by a project for people with dementia and their partners. Clearly this had to be mothballed too given the risk for older people with pre-existing conditions. This left us with two gardens, the two largest ones fortunately in terms of food production. At the one in Halliwell, mostly attended by people with mental health challenges, the gardeners worked out a clever social distancing strategy in which people were given time slots during the week to go down on their own or in pairs. Tasks needing to be done or tasks collected were recorded on a large blackboard ready for the next people to see when they went down. Thanks to this innovation production at the site has not been effected.

The other large community garden in Great Lever involves a general growing section and a smaller subsection for a mental health group. Again, the latter group worked out a staggered social distancing strategy and production was maintained. The general plot became the launch pad for the next step.

In March we organised a get together for volunteers who wanted to support their self-isolating neighbours. We formed a new group and named it ‘Bolton Mutual Aid’. We set up a Facebook page and held a socially distanced organising meeting in the garden. Soon we attracted a core of thirty volunteers many of whom had never participated in any sort of volunteering previously. 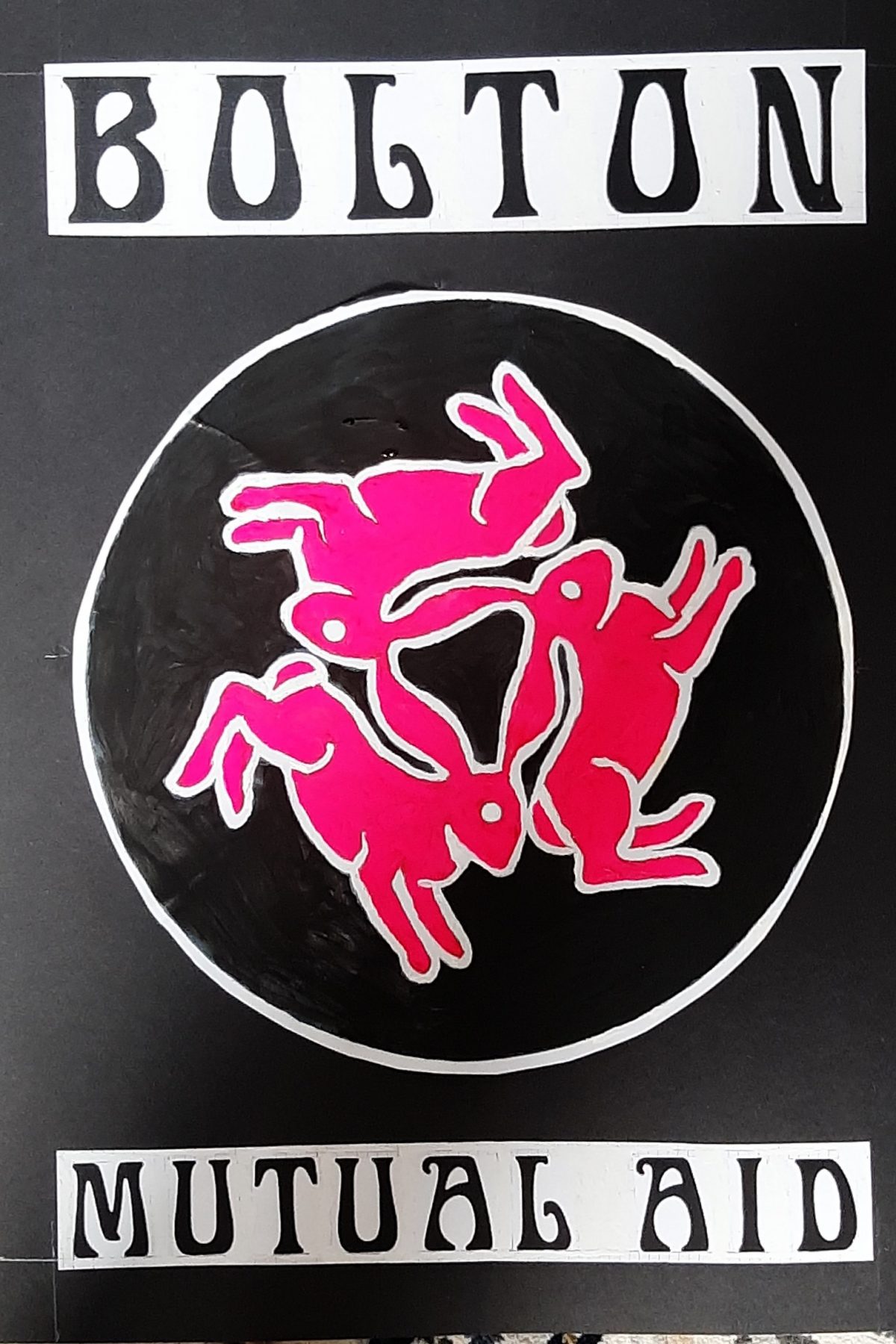 Our activity over the past few months can be summarised as follows:- 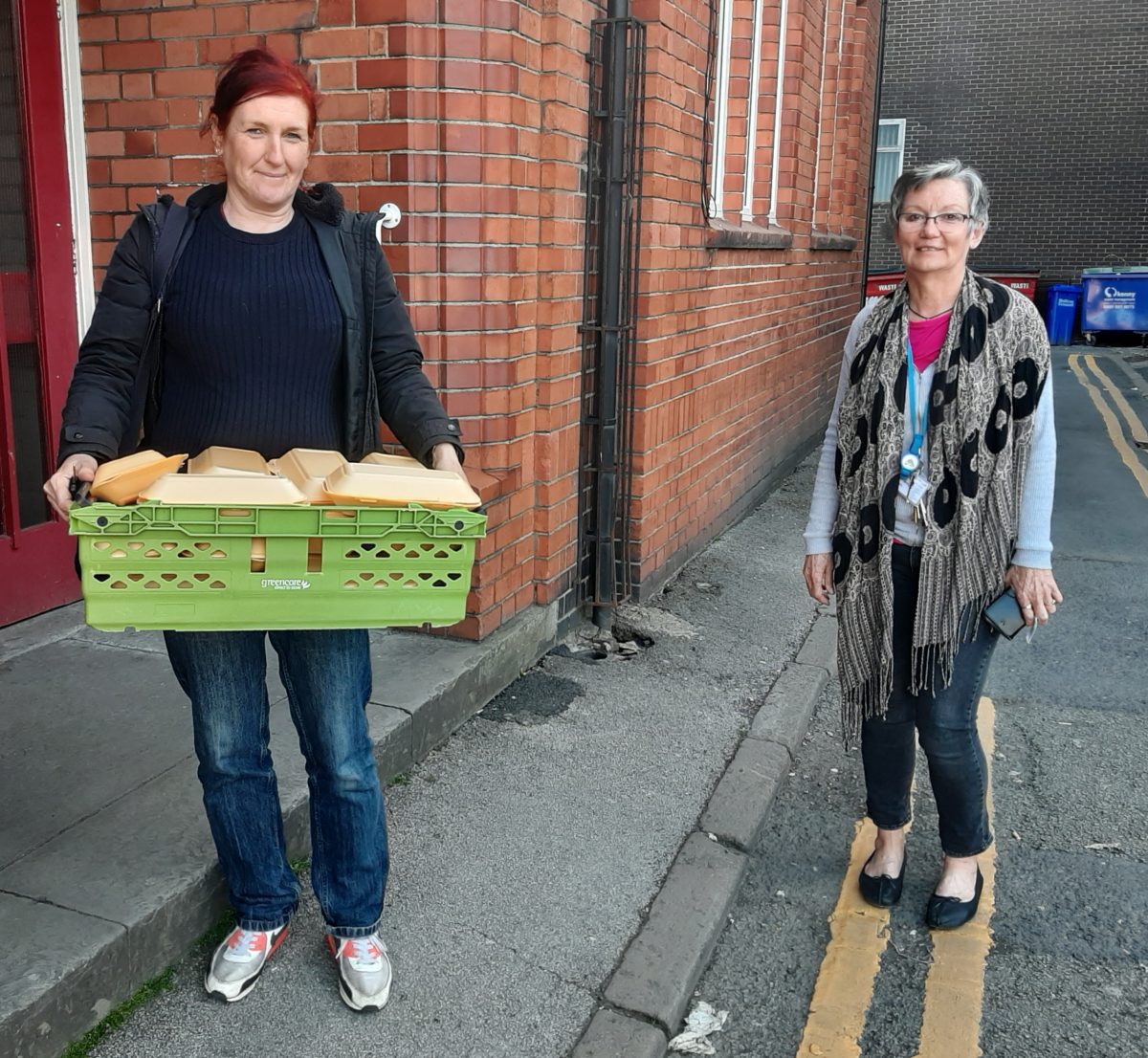 It is hard to put into words the emotional experience of this coming together within neighbourhoods. Bolton Mutual Aid was one of several community groups in Bolton working tirelessly to support neighbours in a time of great need.  Perhaps the greater long term effect on a societal level has been the greater cohesion of families and networks of friends, relatives and neighbours not officially affiliated to any formal groups.  As with the recognition of the role of health and care workers perhaps we are all now realising as a general point that what matters above all else is simply other people.

Brian Dunn, one of the older self-isolating residents in Great Lever who we have supported spent his life in the old friendly society movement.  Since the introduction of state welfare, health and benefit schemes by successive governments in the twentieth century the movement began a seemingly terminal decline. Yet Brian was amazed to see the principles of fellowship and solidarity alive and kicking again in the midst of the crisis which had forced him to stay at home. He recognised those self same principles of community self help and mutual aid which had animated the many societies he had belonged to all of his life. In response to our recent survey Brian wrote,

‘We will live in a very different world post pandemic and the spirit of mutual aid needs to continue and grow. I have spent my life in the Friendly Societies, a form of mutual aid. I suggest we have a social event so we can all get together and discuss our ideas. I suggest a befriending service, visiting the sick and elderly and to assist them in any ways they may require’ 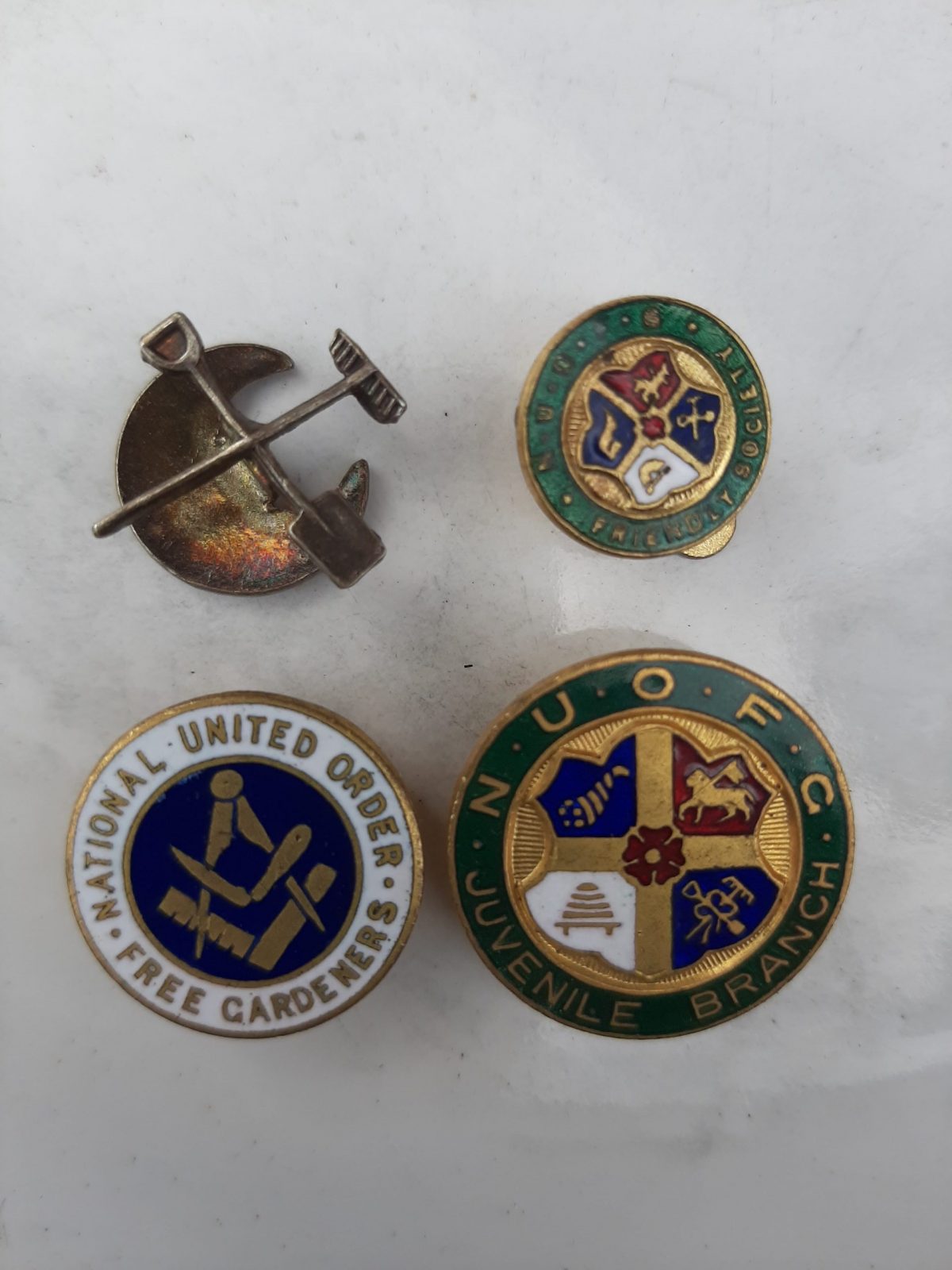 In 1910 there were 4,734,538 members of UK friendly societies[3] undertaking a huge range of social needs including health, welfare, sickness, burials,  and pensions – voluntarily associating together in the sense of mutual support and fellowship.  In other words a massive segment of the working class was self –organising in their local communities around essential social needs.

One of our slogans which we diggers promote is ‘reclaim and extend the commons!’ Yet we have been as surprised as anybody else that this extension and reclamation of the commons should take this form of mass community mutual aid. But then again it makes sense when you consider that all that we do and strive for has to have a basis in our social relationships: if those relationships can be altered from egotism and selfishness to altruism and solidarity then a more equal, green and more sustainable society might arise upon this solid foundation. If we can just let go on one level then perhaps the world we truly desire might finally come within our grasp? Well that is our hope anyway… 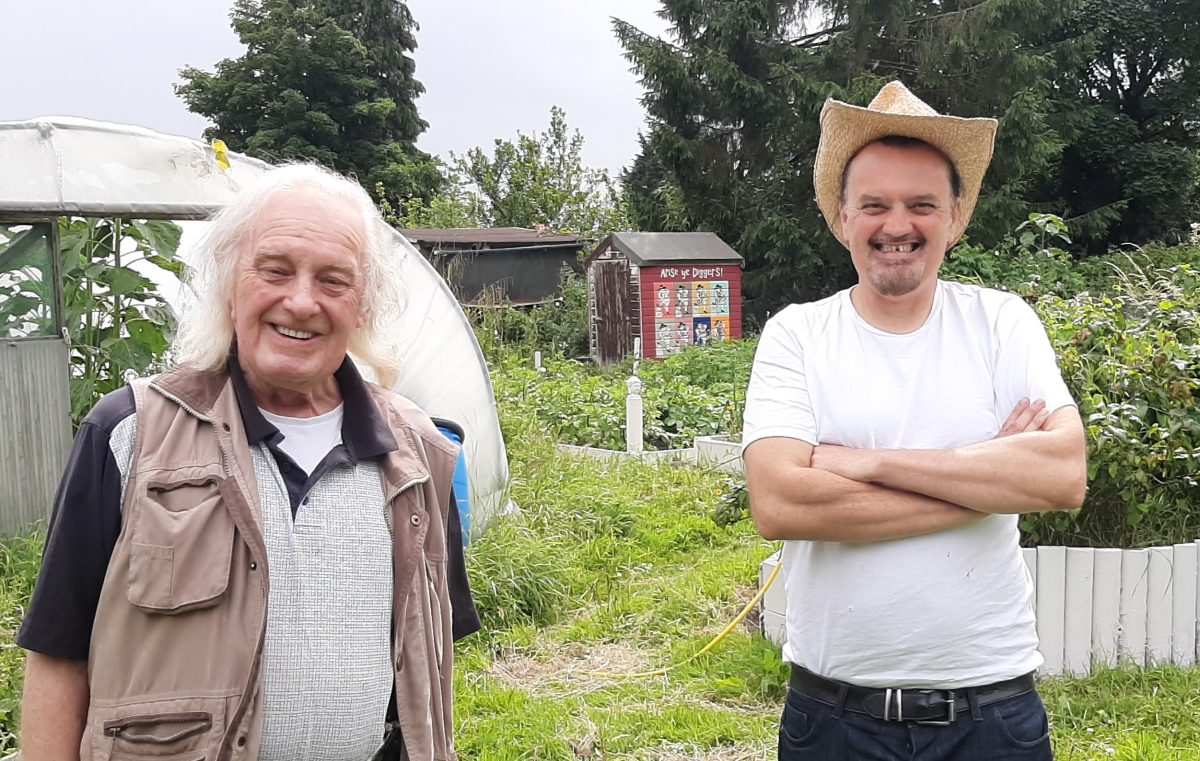 Myself and Brian at the Great Lever site in July: this was the first time Brian had been out of his house in four months!

We all saw it, it wasn’t a dream, it was a glimpse of a more sustainable, greener society: the cleaner air, retreating pollution, the human solidarity, the encroaching wildlife, the friends and families cooking and growing together, the birdsong, the glad beams of an approving sun. We now know what is possible.

[3] ‘Reinventing Civil Society, The Rediscovery of Welfare Without Politics’ by David G Green, (Civitas:Institute for the Study of Civil Society 1993), p.42