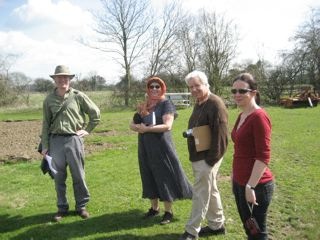 I recently visited Wakelyn’s Farm in Suffolk, a working farm which is also leading a research centre for agroforestry.  Our group was shown around by Prof. Martin Wolfe, who runs it, and has had a long career as a forward thinking agricultural researcher. For me, as the least expert person there, the day was like a master class in the future of agriculture.

Prof. Wolfe regards agroforestry as part of the general permaculture approach to growing food, although a part which is perhaps closer to conventional farming than what people may think of as permaculture.

For him, the key to everything he is doing is diversity.  He is exploring different ways of combining different plants for their mutual benefit, and to avoid vulnerabilities from pests and disease.

The basic approach at Wakelyn’s is to insert north-south oriented strips of  trees between strips of land used for growing crops. The north-south orientation is to minimise shading of the crops by the trees.  Martin has found that there is very little reduction in the productivity of the strips because of the trees. When considering the extra produce of the trees, which includes coppice, fruit, and nuts, the net results are higher. 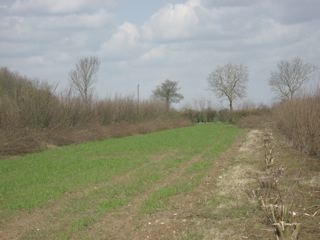 Some trees, such as Italian alder, fix nitrogen and could reduce a nitrogen-fixing crop in the rotation. They also reduce wind and so create a better micro-climate for the crops.

The rows of trees themselves are extremely productive, as they are like the edge of a woodland and get lots of light. Hazel could be coppiced every second year.  One of us was a forester, who was greatly impressed with the rapid and straight growth he saw.

Generally, the trees were planted as double strips, so one could be cut while other continued to grow and add its benefits.  Martin Wolfe can harvest the coppice using a saw powered by the tractor, which is a lot less work than using a chain saw, another advantage of planting trees in strips. The tree roots extend much deeper than the surrounding crops, and also under the crops, bringing up water and deep nutrients.

Martin Wolfe has been doing many experiments on Wakelyn’s Farm, all related to his passion for diversity. He sows his crops with mixtures of seeds so that there is internal diversity within growing strips, then measures the yeilds to find the best mixtures. Some of his strips of trees contain a mixture of species for different purposes, which he compares. (As 7 tree species, planted in pairs.) He chooses his trees so that even where there is a strip that are all the same (such as willow for coppicing), there is internal diversity within the trees planted.

Wakelyn’s uses no external inputs: fertiliser or pesticides and doesn’t water the fields, yet they are very healthy and productive. They do use diesel for their tractor. 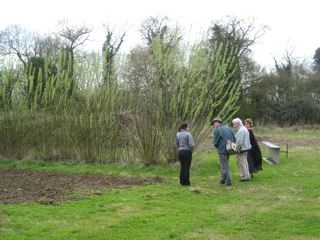 After a long tour of the farm, we walked back through the massive field of a neighbouring conventional farm.  The difference was so striking. The big field was windy, cold and soulless. Martin’s fields were warm, calm and beautiful.