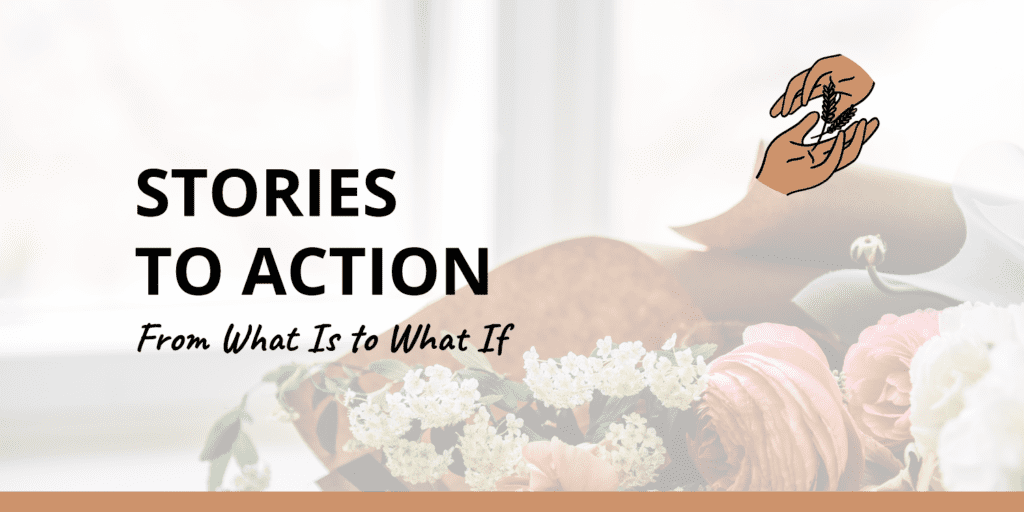 By Kaat Vander Straeten (Transition Wayland), originally published by Transition US in December 2020.

This story is part of a series developed in Transition US‘ Stories to Action phase of their year-long national campaign, From What Is to What If: Reimagining and Rebuilding Our World. In this campaign, Transition US is inviting (through May of 2021) community resilience-building initiatives all over the country to share inspiring stories. Transition US is curating a collection of stories of innovative, successful, and replicable projects that have furthered the causes of sustainability, justice, cooperation, and regeneration in neighborhoods, towns and cities, states, and regions throughout the U.S.

There are two stories here, interwoven: the story of a project called “All Things Mortal,” and the story of the dying and funeral of our friend and colleague in Transition. They are two sides of the same coin, like life and death, and joy and grief. Neither one would have happened the way they did if it hadn’t been for Transition.

Rebecca had only just moved to our town when she came to our screening of “In Transition 2.0.” Our Initiative, Transition Wayland, is featured in that documentary, so we made a big deal of it. We asked high school students to record interviews afterward, and one of those is with Rebecca. Her red curls bouncing around, she is telling the camera she will show up. And so she did, a week later, at our next core group meeting. 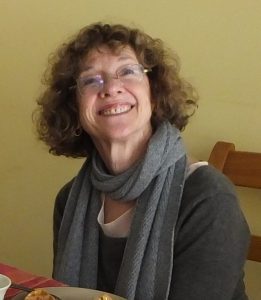 She instantly became a prime schemer. She opened her energy-efficient home for Earth Day tours, helped design and plant a permaculture garden, picked up a truckload of totes for rainwater catchment all over town, wrote opinion pieces for our local paper… It still surprises us that we did so much together over just two years.

One of her special contributions to transitioning our town was in Inner Work. She created a program called All Things Mortal, with gatherings to talk about death and presentations and workshops on home funerals and green burial.

When she and I proposed All Things Mortal to our core group, everyone else balked. They thought it would make our group look “crazy”. They argued that that kind of work is not Transition work – that Transition work is climate change, and energy efficiency. That it is too depressing not community building at all.

We spent a couple of hours unpacking all of this. Though in the end not all were persuaded that this kind of work is perhaps the most fundamental part of our mission, all gave the “safe enough to try” all-clear, and we went to work.

With light-hearted invitations to “Coffee and Cake Death Cafe” (the image has a crow pecking away at the cake), we touched those who were already questioning our dominant culture’s take on dying and death, but who were having to do it in isolation. We created a safe space for them to talk, to hear from others. With workshops on home funerals, we gave people practical resources for putting their desires for a “good death” into practice. We connected them to one another for support. With articles in the local press about these gatherings we opened many a mind to a different way of relating to what is. We also educated local officials, who are needed to make a home funeral happen.

None of these people had connected to our Transition work before then. It was a great culture work to forge our courage, imagination, and community for the hardest of times. That hard time came too soon for us, when a couple of months later, and a mere two years after we first met, Rebecca was diagnosed with a brain tumor.

Within two weeks she was no longer really with us, in mind. Because of All Things Mortal our group knew her wishes: to die at home, have a home funeral, and a green burial. She had not yet shared this with her older friends and her daughter, so we became her gentle advocates.

Then, for ten months, we took on part of her care, carrying out all the practical things, like grocery shopping, that were needed for her to remain at home. We visited daily, weeded her garden, walked her dog. Her house always had a string of cars and bikes parked up front.

In the few times when she was lucid, she told us that this was what she wanted – not just for herself, but for us, her friends, and for the community at large. She put it that this was the work of a true elder, teaching us: One day, this will be you, this will be everyone you love. This is why you love them. Stay close – don’t turn away. Watch closely. Spread the word. Weave the web of community around it.

We did just that, in that order. First: stay close, watch closely. Around her, our friendly Transition core team became close friends. Facing personal catastrophe, we had to face our own demons and did so together. We also faced a serious drain on our time and resources, a sudden shift in what we thought our work was, but we were resilient and adaptive, and we dropped most of our outward-facing projects.

Rebecca saw this, and after a few months she presented us with a challenge, the challenge that would make us spread the word, weave the web. She asked us to build her coffin.

Every time I think of it, it takes my breath away how clever she was! She specified a plain box from local white pine and no metal. She knew, of course, that none of us knew a jig from a reel. So she knew we would have to ask for help, open up again. Enough self-sufficiency! Community! 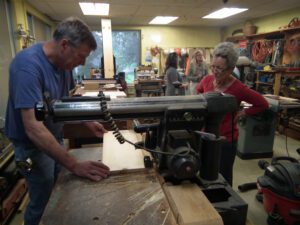 The volunteer carpenter teaching us how to use tools.

A friend of a friend offered his woodworking shop, a local carpenter volunteered to help with all that dovetailing. Others sourced and donated the pine boards, the glue. We had the use of the shop for three very intense days during which we built the coffin. Some of us were there from early morning till late evening. Tom, the carpenter who had never even met Rebecca but was simply blown away by what we were doing, put in the most time. The news spread. The shop was in the middle of town, and people started popping by to give what they could: a helping hand, encouragement and advice, a blessing, lunch, and snacks. In the end, twenty-one people lovingly sawed, sanded, glued, even just touched that box, and made it beautiful.

Beautiful too were all the stories that were told around it as it came together. People came and told us stories about Rebecca – how she always volunteered at the polls, helped her neighborhood deal with a gun range controversy, and old friends told us about her many lives before she moved to Wayland.

We also shared stories from a time when this kind of thing – dying at home, communal coffin building, a home wake – was common, and we wondered how it had turned into a taboo. There were hard stories of awful dying and hard stories of good dying. After a while, we began to share how we would like to go ourselves. We laughed a lot. Always there was the work, with our hands and hammers and chisels and the smell of wood shavings and glue.

From the shop, we fanned out to visit the town’s health department, town clerk, police chief, and the cemetery director. We talked with them about what was happening, that we would have a home funeral, and how they had to help us with the unfamiliar paperwork and permits for the transport and the burial. All of this was new to them too, but they were all open-minded, appreciative, helpful – after all, they knew and loved Rebecca.

Ostensibly we had put All Things Mortal on the back burner, but in reality, the work of changing the culture of dying and death continued as we planned the first home funeral in our town in a long time. The story of the home funeral is a different story, more private. Let me just say that, unasked, the Police Chief sent patrol cars to escort our funeral caravan, the minivan with the coffin upfront, and the cemetery director allowed us to fill the grave ourselves. 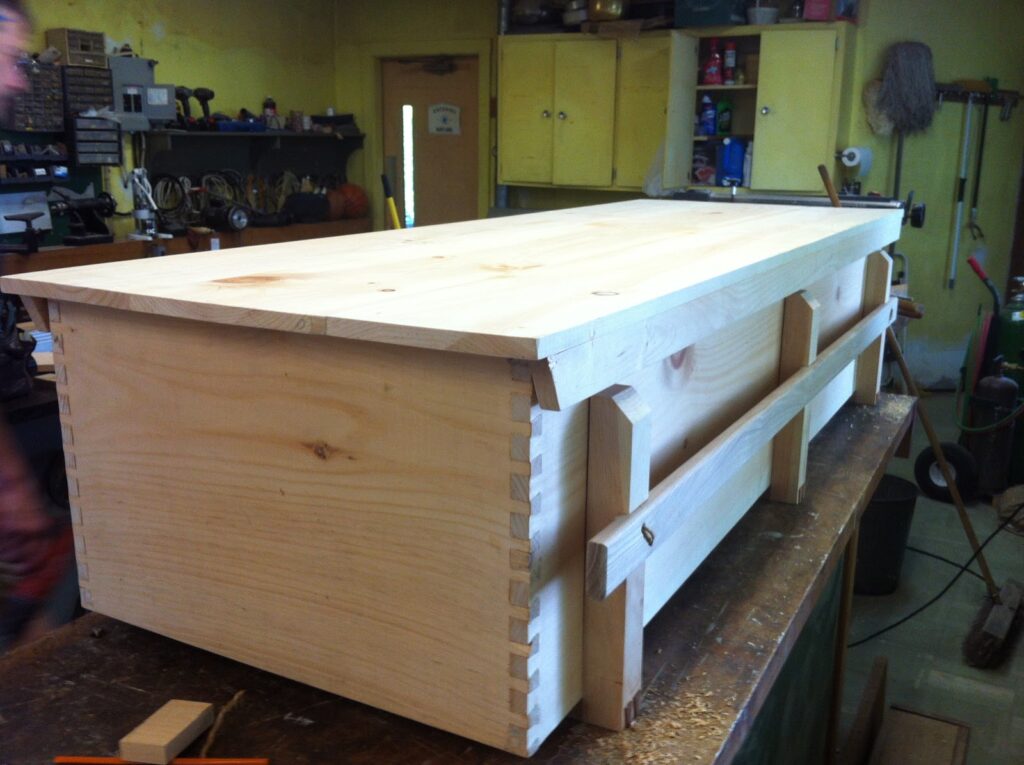 Many months after we buried Rebecca, someone I didn’t know approached me at the grocery store and asked: “Were you in that group that built that coffin?”

This story is still a story of our town. It is a legend.

Rebecca came to us and we had years together thanks to Transition. The Transition mindset of openness, courageous experimentation, and resilience allows us to do and share the most difficult and rewarding work. And the Transition lifestyle has the depth and width to embrace the wide range of personal, intimate grief to group friendship to community learning.

It is nothing less than a blessing.