Recently bees have been disappearing in their millions, affecting not only the production of native honey in every country but the bees’ great task of pollinating the trees, fruit, vegetables and herbs that make up two-thirds of what we eat every day. In response to this local and global crisis, several of us formed a working party within the Transition initiative, Sustainable Bungay, to help the threatened honey bee.

Bungay Community Bees is a Natural Beekeeping Project which aims to manage hives in as sustainable a manner as possible. We’re running the enterprise as a CSA (Community Supported Agriculture) scheme, where members own ‘shares’ in the harvest and take part in the beekeeping year. It’s the first purely bee CSA in England and has attracted a lot of attention.

“We are not a commercial venture and honey production is viewed as a bonus rather than a prime motive for bee keeping. We aim to use two or three systems over the next few years until we find one that suits us and the bees best,“ reported Elinor McDowall, one of two Transition beekeepers who learned their art with the Waveney Valley Beekeepers last summer.

So how do you set up a Transition Bee Project?

First step: have a plan. The first year Bungay Community Bees aimed to recruited around 20 supporters to invest in two hives (National type) and colonies, insurance for two beekeepers, basic equipment and training for two new beekeepers (membership is £20 per annum). Benefits included visits to the hives to learn more about beekeeping, an opportunity to have a hive in your garden, a chance to attend a beekeeping course paid for by BCB and come along to the end of season honey harvest and party. The share of honey and wax will increase as the hives grow in strength and number.

The second step: allow the idea to catch the imagination. We wrote one press release and the local media responded immediately. We were given wide press coverage, our beekeepers were interviewed on the radio and we made the regional six o-clock news. It’s the kind of restoration story people love to hear about because bees go to the heart of things. Afterwards Elinor started to keep a bee blog on our website, talking about all the different visits and what was going on in the hives. People rang and wrote from all over the world. The beekeepers were asked to speak at several local events and in June gave a talk at a Creating the Greenest County workshop called Local Food and Climate Change: The Role of Community Food Enterprises in Wenhaston. Josiah described how BCB allowed people who might otherwise lack the confidence or resources to get directly involved in beekeeping – an approach that could be applied to all sorts of food and craft skills. 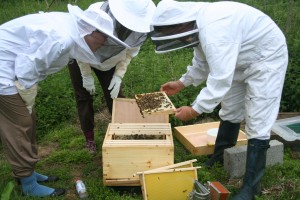 The third step: let it go where it wants to go. The group now numbers 35 “families”, which has given us enough funds to train another two new beekeepers this year. We were given two extra hives and two swarms and offered myriad gardens in and around the town to place the hives (they are presently housed in two outlying apple orchards). An experienced beekeeper joined the group. BCB is also in contact with other groups, including the Soil Assocation. We’re hoping to speak with our fellow Transition initiative, Transition Brixton Food and Growing Group, who are setting up a similar venture next year, Brixton Bee Saviours. They organised a one-day course run by the Natural Beekeeping Trust at the end of last month learning basic skills and principles.

The fourth: keep busy! The bee project has regular meetings during the summer. Every time the hives are opened the group is invited to attend. We encourage children to come and take part in the activities, such as making frames for the hives. This month two of us are giving a talk on Bee plants, both wild and garden, to bring awareness to the relationship between bees and flowers and human beings, as well as encourage bio- diversity (colonies are made vulnerable to disease – especially the varroa mite – by the widespread use of pesticides and lack of bio-diversity in single-crop farming, as well as by the stressful nature of commercial beekeeping). We’re going to see the documentary Vanishing of the Bees together in October. 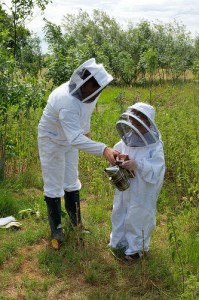 This autumn BCB has also been invited to teach “bee classes” to the local primary school, where we’ve also been asked to set up a hive in the children’s garden. Whilst teaching children about Peak Oil and Reconnection with Nature at Catton Grove in Norwich, we held a session on bees. We put our heads together and made a humming sound. Then we walked Indian-file down the corridor and out into the Spring sunshine. We hung our bees made of larch cones and golden wool in the schoolyard trees and danced a huge figure of eight across the asphalt, laughing.

The writer and activist Arundhati Roy once wrote, ‘I know a new world is not only possible, she is on her way.’ On a summer’s day we can hear her buzzing.

Follow the flight of the bees on our busy bee blog at www.sustainablebungay.com

If you’d like BCB to talk to your group or would like information about setting up a bee project please contact Elinor McDowall  07791 495 012 elinorgalaxy@gmail.com.
If you would like further information on Brixton Bee Saviours or like to join the group Email
stevetooze@googlemail.com or call Steve on 07967 390 960