Producing a “Who Feeds Bristol” report was an obvious and crucial move after Bristol published its peak oil report in late 2009. It’s a very solid and useful document, commissioned by the NHS (National Health Service). There should be one of these for every town/city that’s part of the current globalised food system – and that’s just about everyone. 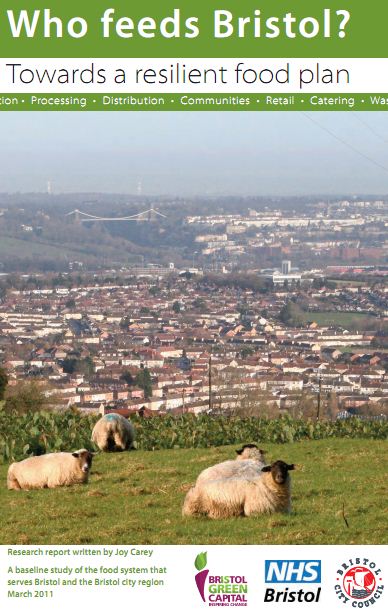 The need to look at the food system for Bristol was identiﬁed as a priority by Bristol’s ‘Green Capital Momentum Group’ in late 2009 following the production of Bristol’s Peak Oil Report (1). The ‘Who Feeds Bristol?’ research was designed to take the issues raised in the Peak Oil report and to explore the characteristics of the current food system in more depth.

The work of researching and preparing the ‘Who Feeds Bristol?’ report was commissioned and funded by NHS Bristol, and designed and conducted by Joy Carey. A multidisciplinary Advisory Group provided advice and guidance, and met on seven occasions.

The report is primarily a descriptive analysis of the food system serving Bristol. In addition, the report gives some global context, and in later chapters there is a discussion of resilience in relation to inputs, outputs and threats. It includes an analysis of the positive powers that Cities have in shaping their food system, and it makes suggestions for action.