Chris Johnstone works in the area of the psychology of resilience, sustainable happiness and is co-author, with Joanna Macy, of Active Hope: how to face the mess we’re in without going crazy. Chris appeared at both the Unleashing of Transition Town’s Totnes and Lewes, and has interacted with different Transition groups ever since. He’s also an accomplished musician (you can hear him playing briefly at the end of the podcast of our interview).  I started by asking him why celebration matters:

One of the thought blocks that people bump into sometimes is the voice that says “well what’s the point of doing this?” What celebration does is it gives us an answer to that. I think of it as helping shifting us from a going nowhere story where we feel we’re making no progress and have no direction to what I think of as a going somewhere story, where we feel that we’re on the way somewhere because we’re celebrating and marking important steps along the way.

What are the risks of not pausing to celebrate, do you think?

You can do it alone. It’s good to have ways where we notice the steps that we’re taking by ourselves and find some way of marking those and reinforcing those, but I’d say that celebration generally is much better in company. It’s also socially bonding and there’s very interesting research here about what really makes a difference in relationships.

There’s a psychologist called Shelley Gable who worked at the University of California Los Angeles, and she was trying to work out what are the vital things that really make a difference and she recorded lots and lots of relationships. One area of communication that seemed to make a key difference in relationships was the response to good news.

If one person had good news and shared it with the other and the other person responded to the good news by being ‘joy in the joy of another’, by celebrating the good news, that deepened trust, that deepened the sense of satisfaction in the relationship. But if somebody shared good news and it passed by without notice or even worse, the person tried to persuade them that really it was bad news, that led to a drop in the level of satisfaction in the relationship that was so strong that Shelley Gable found that she could work who was at higher risk of breaking up over the next 12 months just by looking at their response to good news, whether somebody celebrated the good news when it was shared, or whether somebody passed it by or poured cold water on it.

There was a thing that I wrote for this month’s framing editorial that was my attempt at what some of the ingredients of good group celebrations might look like. What does celebration on a more day to day basis in a group like a Transition group – how can we design it into our meetings, our everyday rather than having something we just do once a year?

I’d say there’s something here about celebration needing to be meaningful. It’s asking yourself “what exactly is it that we are celebrating?” What we’re doing with celebration is celebrating the things we appreciate, the things that we value. By having a shared celebration, what you’re doing is reinforcing the system of values, the shared system of values within that group. In terms of what keeps us going, it’s really important to celebrate success. So what comes up there is we need to look at how do we notice success, how do we notice progress and how do we define that?

It’s particularly important when working for social change, for social and ecological justice, that we can often have a lot of disappointment and frustration along the way. If we only celebrate the really big things, the really big victories, we can have long gaps between the celebrations which makes us feel that we’re losing, that we’re not making progress. And so therefore I think what’s really important is to look at the mini victories along the way, and to both celebrate the positive outcomes that happen, but also to celebrate the effort put in, and one way of doing that is just to find some way of appreciating what has been done, so for example research on our mood shows that one of the things that improves mood is both the experience and also the expression of gratitude.

One of the ways that you can build celebration into everyday meetings and things is just finding some way to appreciate each other, appreciate the steps that we’ve been taking. If you’ve notice that someone’s worked really hard on something, to have some gap in a meeting, some agenda item in the meeting where you just notice the things that have been done and the effort put in, and find some way of valuing them, marking them, noting them.

It might be first of all there’s a slot for anyone who’s got any good news to share and then to celebrate that, but also has anyone got any appreciations of gratitude to express. To actually build that into part of a group culture that we take time to notice and celebrate the steps we notice each other taking, and also if somebody has noticed a step that we’ve taken, for it to be completely more than fine, I’d say brilliant, for us to step forward and say – one thing I’m pleased about, you may not have seen this but one thing I’ve done is… where we take time to notice and to celebrate the steps we’ve taken ourselves.

It’s great when other people can notice it, but we don’t want to end up feeling resentful because no one cheered for this hard piece of work I did. We actually get better at stepping out there and saying – yes, I’m really pleased that I did this, I’m really pleased that I did that, because when we mark the steps that we’re taking, we reinforce that in a way that helps us keep taking those steps.

Partly it’s the scale of the tasks that we face. We can’t have a party to celebrate climate change being sorted out, because that’s probably not going to happen in our lifetime. There’s already problems in the post, as it were, from the carbon that’s already been released into the atmosphere. The task is so huge that we could be working, well, there’s 168 hours in the week and we could be working all of those for a whole year and still feel that there’s more and more to do. There’s two things here. 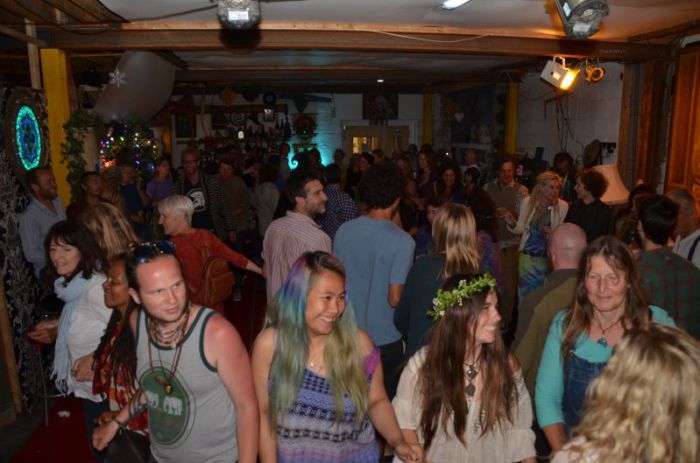 But also if we only focus on the work that’s still to be done, the danger is we just get exhausted. We become like what we’re doing to the fields of wheat around the world – we harvest them unsustainably and end up depleting the soil. I’d say that activist enthusiasm is a vital renewable resource, and we need to get much more skilful about how we treasure it. How we look after it in a way that can help it grow.

My last question is, can you think of one celebratory event that you were particularly moved by or inspired by which could be a story that might be useful for Transition groups to hear?

I’ve shared a number with you that I really delight in. One that comes to mind is when the two of us spoke together at the launch of Transition Town Totnes. It was the official unleashing of Transition Town Totnes and that was years ago now. But I think that was in 2006, so eight years ago now. What we do is celebrate launches of things in a way that we’re marking them and saying – hey, this is the beginning of something. We don’t know what will happen, but we’re marking our very clear intention.

There’s a form of energy, I call it ACACI which means A Clear and Committed Intention. It’s like a form of psychological energy. When you have strong, clear and committed intention, it drives you on. One of the ways of building that up is to have a launching celebration. I really enjoyed that event with you. We spoke together at the unleashing of Transition Town Lewes as well and we’ve both been back there since then. You wrote recently in your July 1st blog about being at their 7 year celebration and I was there at their 5 year celebration.

If you have a party to begin something, then you can also revisit that point some years on. So they become markers in time. We can say yes, we were here when this began, we celebrated the launch of this. And now here we are meeting again, this number of years later and we also celebrate the effort put in and the steps taken and the distance covered in that between time.

What you do there is build in the journey approach to change. This sense that we’re on a cultural migration. That’s why I love the term Transition. Transition is about moving from one place to another and we mark the steps along the way. So we celebrate when we begin this journey with the unleashing, the launch, but we keep coming back to that at periodic intervals and say – hey, we’re still on this journey. It’s still important to us.

While there might be some steps forward and some steps back and frustrations and disappointments along the way, there will always be things that we can look at and say yeah, that’s what we did and I feel really good about that.

When you mark the things that you feel good about, you get something which I call afterglow. This is the warm feeling of satisfaction after you’ve done something or noticed something that you feel good about. That’s what keeps us going, it’s fuel for the journey. So back to that original idea that celebration is a form of psychological nourishment and it’s absolutely vital to keep ourselves going.

You’re a very gifted musician and you managed to weave music and getting everybody moving and joining in as well. What’s the role of music in that, do you think?

It’s so interesting, because they’ve found bits of bone that have been turned into flutes that are 20,000 years old. I see music as a form of social glue. It draws people together. There’s something very remarkable that can happen when people move rhythmically together. It’s where we shift out of just seeing ourselves as separate individuals to where we sing and dance together it reinforces our connectivity, our sense of being part of something larger.

That’s great – actually ‘great’ is an understatement. I talked about psychological nourishment, also how do we reinforce and grow social capital? Social capital is the wealth that comes out of relationships. Shared music and dance is one of the ways that happens.

Here is the podcast of our interview with Chris.