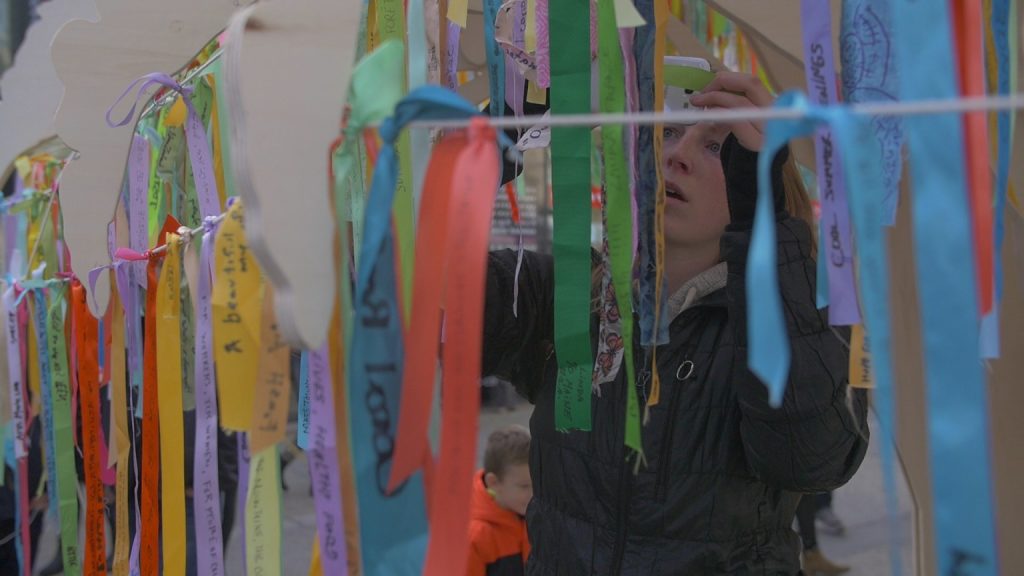 First published on his website, Rob Hopkins shares with us his thoughts on COP26 and the five stages of grief.

In a few days I head up to Glasgow for COP26. I have no formal role, indeed I don’t know why I’m going there really, and I can only be there for the first week, but I feel drawn to being there. In 1955, nine months before Rosa Parks did the same thing, the Civil Rights campaigner Claudette Colvinrefused to give up her seat on the bus, and later said, reflecting on why she did it, “History had me glued to the seat” (such a beautiful quote). I feel like history is calling me to be there, just as it did when I went to Paris for COP21 in 2015, which felt like an extraordinary time to be there, a moment in history that had to be tasted. 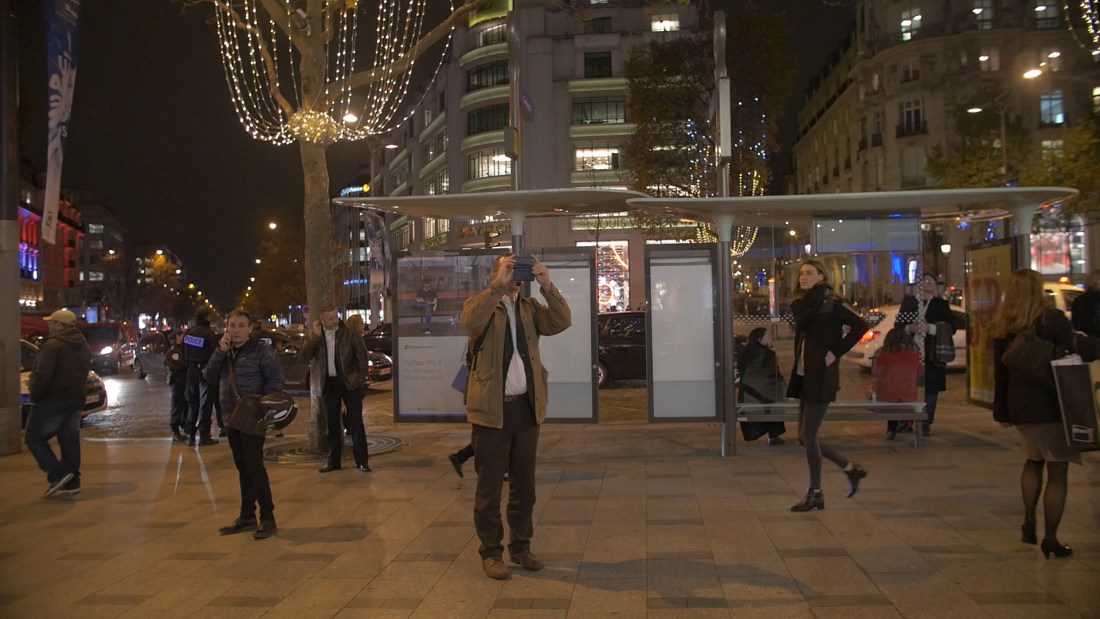 Rob Hopkins photographing the outside of the UGC Normandie cinema in Paris just before the premiere of the film 'Demain' during COP21 (Photo: Emilio Mula)

With some governments already starting to lower peoples’ expectations that the Summit will be anything other than a massive disappointment, their spin doctors will have their work cut out to present this as anything other than a historically shameful failure to rise to the challenge of these times. But hey, I remain open to being impressed.

You’ll hear a lot in the coming weeks about ‘Net Zero by 2050’. As Peter Kalmus put it recently, “two fatal flaws hide in plain sight within those 16 characters. One is ‘net zero’. The other is ‘by 2050’”. Net Zero is not a way forward, not a target, rather it is, as BreakThrough put it, “a strategy for COP26 to lock in many decades of unnecessary fossil fuels use well past 2050”.

It is an idea being promoted by bankers, oil company executives and the legions of well-paid people who caused this problem in the first place. But it contains no sense of urgency, no vision, no willingness to address the deeper issues underlying the climate and ecological emergency. It’s about haggling with physics, maintaining business-as-usual, and hoping that offsets and technologies that barely exist yet will allow us to pump vast amounts of CO2 out of the atmosphere. And that we won’t have to unpick any of the stuff in the awkward box marked ‘colonisation’. All of which sent me to dig out a yellowing book on the family bookshelves.

In 1969, psychiatrist Elizabeth Kübler-Ross published her seminal book ‘On Death and Dying’ which included her ‘Five Stages of Grief’ model, drawing upon her years of working with terminally ill patients. It strikes me that we see very much the same stages playing out as we prepare for COP26.

We’ve seen the first stage very actively in our world for decades now, Denial. The climate denial industry has been huge, lavishly funded, and profoundly damaging. As the old saying goes, “A lie can travel halfway around the world before the truth can get its boots on”. Fortunately it is getting harder and harder to be in full denial any more as the science becomes overwhelming, but it’s still out there and remains a toxic influence on public life.

The second is Anger. Anyone who has ever ventured into the world of the comment threads that appear beneath any article or tweet about Extinction Rebellion, or Insulate Britain, or who sees how the issues are covered in places like GB News, will know the level of anger that the mere suggestion that we need to eat less meat, or fly less or even change anything at all, can elicit. Full on, vein-pulsating, splenetic, eye-bulging fury. And a huge amount of scapegoating, of gaslighting, of hatred for those suggesting change is inevitable. There’s a lot of it about. 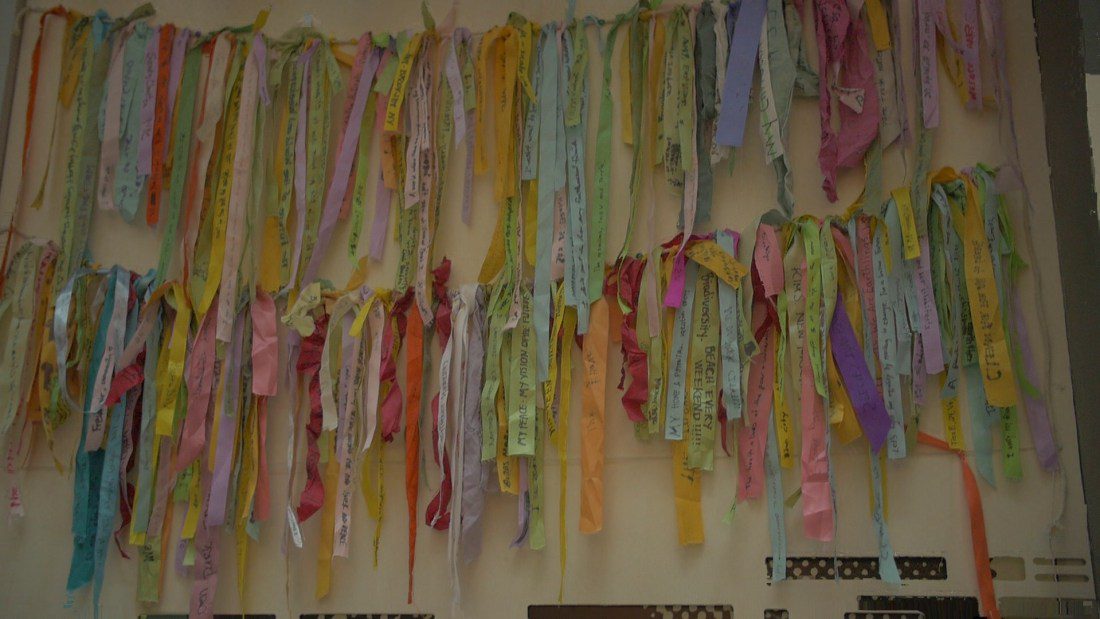 Climate ribbons at 'Place to Be' at COP21

The third is Bargaining. Bargaining is where we find most of the people sitting around the table at COP26. It’s where most businesses are right now, and most of the companies who continue to invest in and finance the climate emergency. It’s beyond denial, it’s (mostly) beyond the anger, but it’s now about trying to make deals with physics. The UK’s current version is “we’ll accelerate the move to electric vehicles, and give grants for air source heat pumps, but we want our expanded airports and our new coal mines” (the UK’s recently-published ‘Net Zero Strategy’ summarised beautifully for you there). It is profoundly unimaginative. As prison-abolitionist Mariame Kaba puts it in her book ‘We Do This ‘Til We Free Us’, “we live in a system that has been locked into a false sense of inevitability”.

It’s something I called out when I was in Nice recently at the ‘Transition Forum’ organised by the city’s right-of-centre Mayor, a summit to explore strategies for Transition organised by an administration who are also planning airport expansion and building of thousands of new, energy inefficient homes of prime farm land. My approach at such events is to think I’m most likely never going to get invited back anyway, so I might as well tell it like it is.

The fourth is Depression, an all-too-familiar condition for those of us who have passed through the previous three, and who understand the scale of the crisis and can see no way forwards. In many ways, it is the natural response to the current situation. Over 50% of young people now experience what is called ‘eco-anxiety’. I would argue that eco-anxiety is the entirely natural response to the world around us today, a good indicator of having a pulse and of paying attention. It’s why grief work is so important, and why activists need to support and hold each other. It’s that ‘dark night of the soul’ that all climate activists pass through, and one of the reasons I personally have my doubts that Citizens Assemblies on the climate can ever be as effective as they need to be if they don’t include supporting people to experience such a night as part of the process.

But it’s the fifth step, Acceptance, that I think is most fascinating in the context of COP26. It doesn’t mean some kind of happy-clappy glossing over of reality. I have the huge privilege of travelling around Europe visiting Transition groups and others, and seeing what happens when people reach a point of truly understanding the scale and implications of the climate emergency, when they’ve passed through the other four stages. The projects, the ideas that emerge when people have accepted that business-as-usual is finished, that the only option now is fresh and bold thinking, are amazing, and offer an inspiring taste of what it would look and feel like if those in charge were to do the same.

The imagination loves limits. It’s why Doughnut Economics is so powerful – it identifies the ‘sweet spot’ in which humanity can thrive, and it explores how we might create, within those limits, thriving cultures, businesses, communities and cities. Acceptance means we are changed by what we know. It means we have to reimagine who we are and how we move through the world. It means we have to be willing to speak fearlessly about what is no longer possible, and to be brave and fierce in protecting that.

It means everything is up for being reimagined, and that we are genuinely excited about that possibility. It means pension funds that are willing to completely ditch fossil fuels from their investments. It means 15 Minute Cities. It means cities fundamentally reimagining their food systems from the ground up. It means decolonising education, making reparations, acknowledging the global north’s carbon debt and so much more.

The output of COP26 needs to be, as BreakThrough put it, “a ‘big minus’ in emissions, not ‘net zero’ emissions”. But it also needs to communicate acceptance, an honest and a truthfulness, that the climate and ecological emergency goes far far deeper than just electric cars and heat pumps, it demands a fundamental reimagining of everything. As long as that feels like being wrenched away from something irreplaceable it will never happen. But if we can nurture the collective imagination and talk about, and dream about, and draw, and paint, and act, and tell stories about, and create living breathing examples of a low carbon future that are so delicious that we create a deep shared cultural longing for it, then we might just do it.

But it has to start with acceptance. The time for bargaining is over.

* Postscript: I wanted to add that the Five Stages of Grief are not something that is a purely linear process, or that once one has reached a place of acceptance, that’s it, and denial, depression and so on somehow melt away. In many ways we flow between these, and indeed cycle in and out of depression in a regular basis, and the other stages too. As Ecopsychologist Mary-Jayne Rust pointed out to me, in response to this blog, “we are grieving a continuous loss so we might revisit those stages and not in any order”. Thank you.

"Radical imagination isn’t something that individuals have...