Here is the latest blog I have written for The Guardian’s Live Better Challenge section:

It began in Guatemala, and now a South African town is using recycling bottles as building material as part of an inspirational and regenerative campaign against rubbish

Take a two-litre plastic drinks bottle, a heap of plastic bags, crisp packets and other non-biodegradable waste (roughly one week’s worth of plastic waste), and a stick. Pack the bottle full of the waste materials, packing it as tightly as you can, using the stick. That’s it. You have an EcoBrick.

Next time you hold a plastic bottle in your hand, try thinking of it not as rubbish to be disposed of, but as the building block for something extraordinary. The story of EcoBricks starts in Guatemala, and takes us, via the Philippines, to South Africa. Susanna Heisse, horrified at the level of plastic waste around Lake Atitlán in Guatemala, first came up with the EcoBrick idea. She built a wall out of them, which became an inspiration to others around the world.

There are now 38 EcoBrick schools in Guatemala built by an organisation called Hug It Forward, Vida Atitlan (Susanna’s organisation) and others, with many more planned. In the northern Philippines, ecobricks.org created an open source manual, distributed to local schools. As part of the curriculum, students are asked to bring in a completed EcoBrick each week, having written their homework on the side of it.

EcoBricks represent a different approach to waste management. Plastics recycling is an energy intensive, polluting business, often involving long transportation distances. How might it be to find alternative uses for them at the local scale? Construction is one obvious approach. EcoBricks turn waste into a highly insulating, robust, affordable, building material, which simultaneously tackles problems of unemployment, waste and lack of housing. They can be used vertically as infill in timber-frame building systems, or horizontally, where they are mortared together with clay or cement.

Greyton in South Africa is the first Transition initiative in the country. Greyton is a town, like many in the country, struggling to deal with the legacy of apartheid, wide social inequalities, lack of affordable housing, and a waste management system that is virtually non-existent.

Nicola Vernon, one of the initiative’s founders, found the Transition model adapted beautifully to the setting and challenges of Greyton. “As a driver for social integration it’s the best I’ve encountered in 30 years of working in social welfare,” she told me. A whole raft of projects are underway: community gardens, working with local schools, and Greyton is set to become South Africa’s first plastic bag-free town this July. A new eco-village settlement is being designed, and 18 jobs have been created already through the group’s activities. 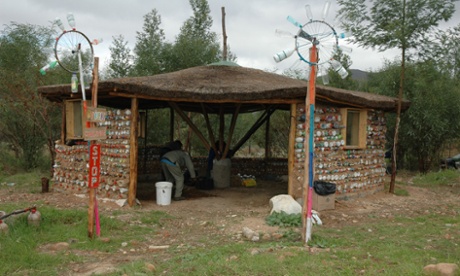 Joseph Stodgel, a US artist, musician and entrepreneur, who heard of what was underway in Greyton and went there to see how he could help. A trip to the town’s dump provided the inspiration. “The dump is the first area you come to if you are walking from town,” he told me. “It is really a beautiful place, that has such a striking contrast between the pristine nature and man-made pollution. Pristine sites are usually host to festivals, but sadly enough are often degraded and polluted as a result of them. I wondered – could we reverse this process and actually use the medium of celebration to drive rehabilitation? Could we use a festival to turn dumping sites into pristine gathering spaces?”

The Trash to Treasure Festival was born, hosted in Green Park, the first part of the dump cleared by the festival, and the part closest to Greyton. Bands play on a stage built from reclaimed tyres. Every year (the third festival just took place in April), EcoBricks are made and exchanged for prizes donated by local stores, and new buildings are created with them. Already a composting toilet block has been built, and future plans include a kitchen, shower stalls and even on-site accommodation. An outdoor classroom is currently nearing completion, with each wall having been built by a different local school.

How does he feel launching these ideas in the context of a town-wide Transition initiative helped? “Greyton Transition Town has been instrumental in uplifting the local community, launching and sustaining a several wonderful initiatives and bringing great attention to wastefulness. Altogether they have been a truly positive force in the area in a number of ways. So many people across the community are into the journey to zero waste. It has been a hugely positive force”.

One of those who caught the EcoBrick bug in Greyton is Ian Domisse, an architect based in Port Elizabeth. He was so inspired by the potential and possibilities they offer that he quit his job and set himself up as an EcoBrick architect. While he waits for planning approval for his first building, an EcoBrick classroom for the Penguins Play and Learn nursery, he has started an EcoBrick Exchange in order to generate his building materials.

The Exchange is a network of local business partners who are happy to offer storage space and discounts in exchange for EcoBricks, as well as community swap shops, where second hand items of value are exchanged for EcoBricks. This idea of EcoBricks as a form of local currency is one of its more intriguing recent developments. Ian gave a series of talks at local schools, inviting them to make EcoBricks for the Exchange. For four months he heard nothing, then suddenly 900 completed EcoBricks turned up.

As the world groans beneath the growing mountains of plastic waste and its toxic legacy, perhaps the solutions lie closer to home than the recycling plant. Perhaps the seeds being planted in Greyton, and the potential, as spotted by Domisse, of EcoBricks to catalyse a local economic renaissance, is an idea that could go to scale quickly. By keeping waste local, it is perhaps the creativity and imagination that it stimulates that could turn out to be its longest lasting and durable legacy.

Interested in finding out more about how you can live better? Take a look at this month’s Live Better Challenge here.