In the context of peak oil, climate change and economic contraction, the kind of learning that most young people currently have access to lacks a clear appraisal of future scenarios. I have taken on the role of (UK-based) Education Coordinator at Transition Network to start exploring how we might start to transition to a situation where young people’s education is fit for the times ahead. Two key areas I’m working on are co-designing blueprints for Schools in Transition and Transition Learning Journey (a one-year skills-based programme for people over 18).

And as part of this latter area, I’m currently visiting India to explore different ways of learning. I’m not sure that India is much bothered by the end of cheap energy. Its economy is booming and the monsoons are more or less on course, but I do know that community based learning and an ecological world view is part of Gandhi’s legacy. 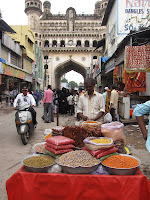 Here I’m searching for models of learning that address the disconnect between the vanishing world of “business as usual” and the world of the future in which the health of communities and eco-systems will become increasingly important. I’m also curious about the stories that societies tell about themselves and how that makes change possible, or blocks it. And I’m looking for the role that values play in design of all kinds and how that impacts on individuals and communities.

The first place we visited was Navdanya, a centre of experimental agriculture outside Dehra Dun from where you might see the foothills of the Himalaya if the mistiness cleared. Navdanya (which means both “nine seeds” and the “gift of life”) was founded by Vandana Shiva, the Indian physicist and activist in 1987. Originally this land was planted with eucalyptus, and then the trees were cut down for cash and the land was planted with corn. Chemical fertilisers and pesticides were used and the land became so depleted that people said nothing would grow here. That was a good base to start from as as restoring fertility here through organic farming would be impressive. It took three years til the local farmers looked over the fence and wanted to know how they could multipy their yields five times over.

Now saving seeds of rice, wheat, millet and amaranth (and much else besides: there are ovr 1300 different kinds of seeds in the banks) has become part of a culture that brings health to eco-systems, humans and communities in 16 states in India. Before the Green Revolution over 200,000 rice varieties were grown in India, now multinationals such as Monsanto push around 10 varieties that are genetically modified so that their seeds are infertile. Navdanya has 580 varieties of rice that they give to farmers while teaching them how to farm organically.

Navdanya hands out seeds to small farmers for free and shows them how to save their own seeds, storing them in metal drums, gourds or plaited baskets smeared with clay. In return the farmers give 25% of their crop back to Navdanya which in turn is handed out as start-up seed to farmers joining for the first time. Like Gandhi’s spinning wheel, seeds at Navdanya are a symbol and tool for change. The values are self-sufficiency and the gift economy. Learners become teachers as farmers teach other farmers and demonstrate how the health of their families has improved through eating organic food. The surrounding jungle, the land for farming and all living beings are viewed as part of a whole system.

These insights raise some key questions:

I’m heading next to Barefoot College where a whole community is living Gandhian and ecological values, and winning prizes for doing so. If technology permits you will be hearing from me soon.

Feel free to add comments to this blog and join me on this journey of learning.