A few days ago we arrived at Tilonia, a small dusty village in the plains of Rajasthan. Driving from Jaipur we saw miles of new developments along the road: Tata vehicle showrooms, highrise luxury apartments, new universities where once there had been farms and countryside. India’s booming economy is conjuring incongruous concrete buildings out of nowhere with little thought to the impact on a falling water table. 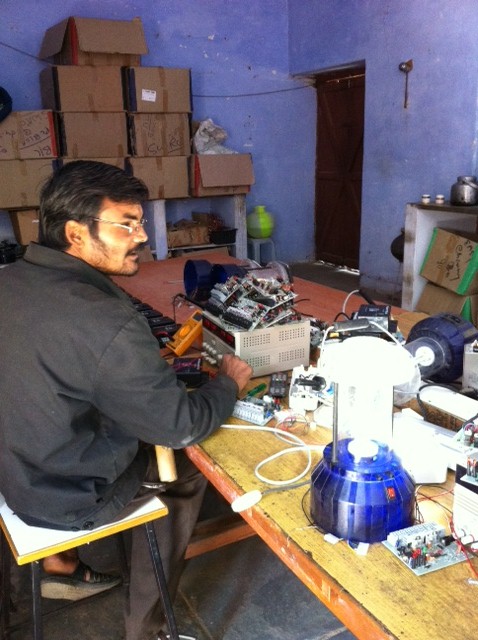 Turning off the highroad ribbon of suburbia, we bump down a dirt track to a place that I have been hearing so much about that it has a kind of mythic status in my imagination.

Barefoot College is a place of no compromises and many miracles. It was founded in 1971 by Bunker Roy as a community where the rural poor could work and live in the kind of self sufficiency that Gandhi sought. In the campus there is an outdoor theatre with stepped seats which turns into a step well in the summer monsoon and catches the rainwater running off the roofs in a 400,000 litre underground tank. There is a mess where we sit on the floor and eat simple meals of rice, dahl, vegetable curries, chappitis and curd. The reception and communications centre (with high speed internet wi-fi) is in a geodesic dome built out of spare agricultural machinery parts.

The post office is round the corner, not far from the craft shop. The next door block houses the medical training and we are invited in to meet local girls who are training to be acupuncturists. Beyond that are the houses that College workers are given for free when they and their families are accepted into this learning, working community. Our bedrooms, like the rest of the complex, are built out of local sandstone and plastered with lime. They are cool and airey with ventilation holes at the tops of the walls. None of the building materials came from more than 30km away and the college was designed and built by the very same poor, illiterate or semi-literate, rural villagers that it trains.

Our guide, Ram Niwass, takes us to see the puppeteers practicing. He used to be part of this village drama troupe before he was invited to host the Tilonia radio shows that are broadcast to the surrounding villages from the Barefoot College sound studio. The puppets are quietly, questioningly, outrageously subversive. They stage dramas around alcohol addiction, domestic violence, the right to a minimum wage and government corruption. Whatever is the issue of the day or alive in a particular village is given an airing in front of audiences of hundreds. Because Barefoot College networks the villages together the villages can then take collective action and demand their rights. 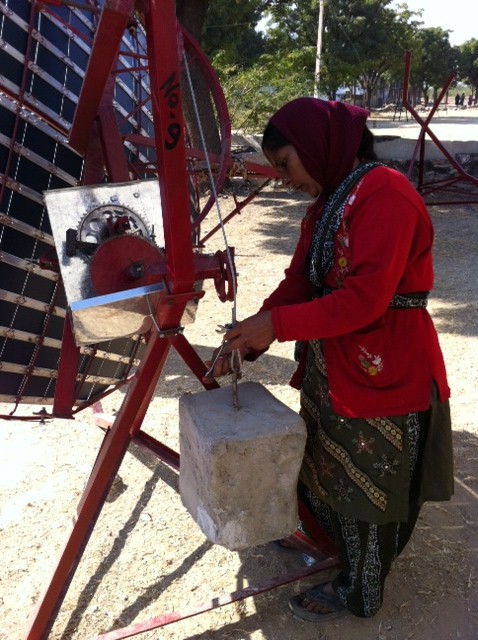 Ram Niwass is a dalit, an untouchable, the lowest caste of all, traditionally barred from acting. He is turning centuries of convention on its head and embodies the Barefoot College values of honesty, integrity, compassion, practical skills, creativity, adaptability, willingness to listen and learn and ability to work with all sorts of people without discriminating. He is also very funny.

Most of the people living on the campus, training and being trained, started off by being illiterate or semi-literate. Many of them are dalits, at least half of them are women, and a good number are physically challenged. We meet a team of lady solar engineers making solar ovens which are made out of small flat mirrors fitted into great parabolic frames. The array turns into the sun, its movement controlled by a bicycle chain, cogs, and a pendulum weighted by a large rock. The sun’s rays are focused into a foil-lined box on top of which sits the cooking pot. Step in front of the box and you feel a searing heat, and right now the sun is not that hot. Many of the solar engineers are grandmothers who right now are training other grandmothers from Africa to take this technology back into villages in Sudan, Tanzania and Zimbabwe. They are coming to the end of their six-month residency here. They also now know how to make compact solar fluorescent lamps that will give up to 6 hours of bright light after sun down. 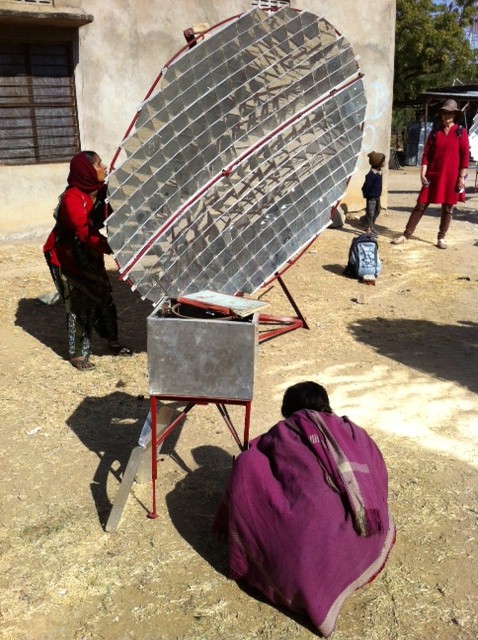 Everywhere we look, people are working In fact no one ever has a day off, except when they go back to the villages where they may have left their families (if their families are not living on the campus). The Barefoot policy is that the salary each person receives is decided on by everyone in the organisation, based on a points system.

Everyone in the college receives a living wage, not a market wage: the maximum is US $150 per month and the minimum about half that at 73 Indian rupees per day (around  $1). It’s all transparent: everyone knows what everyone else is earning, all the working group budgets are available for scrutiny and the total income and expenditure of Barefoot College is painted on the outside of the mess building, year by year.

Equality, austerity and collective decision making are the standards that the college lives by. I ask Bunker Roy how he created this culture and he says “by living it”. 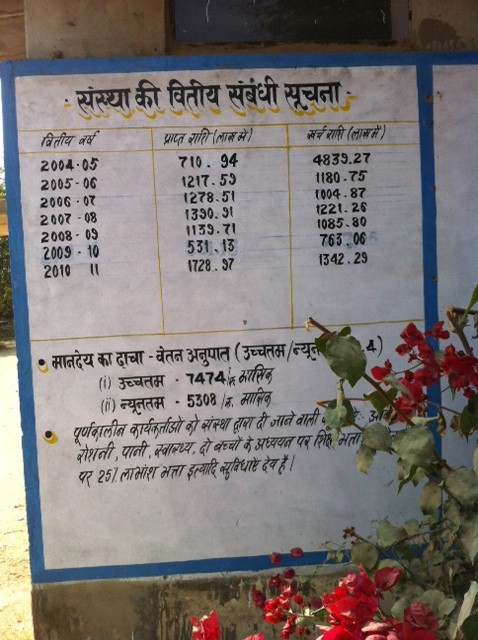 We are sitting on large padded cotton cushions on the floor of his office, propped up by bolsters. It is the end of the day and we have a chance to talk over what is going on in the world and at the college. Bunker claims to have put himself out of a job by handing over the running of the college to representatives elected by all the people who live and work here. He no longer goes to the monthly assemblies at which anyone can turn up to discuss college issues. Instead, the reps come and brief him on what is going on: if any mistakes are going to be made, better to make them now while Bunker is around to help sort them out, it’s all part of the learning by doing process. I’m struck by the powerful sense of community, one in which information and knowledge flows freely, in which wellbeing is expressed through value-based living and working and where everyone looks out for each other. There is no distinction between action and activism as this radical experiment quickly acquired the status of a political statement. Bunker’s own “unlearning” journey sowed the seeds for Barefoot College.

I’m giving him the last words: “Over the last 35 years, what we have “unlearned” is our gross underestimation of peoples’ infinite capacity to identify and solve their own problems with their own creativity and skills, and to depend on each other in tackling problems. What I learned is that empowerment is about developing that capacity to solve problems, to make choices, and to have the confidence to act on them”.