This is as brief as possible a report on the Transition Network web project, specifically funded by Tudor Trust with £50,000 in 2008.

This report covers the period of January 2009 until December 2011. It is made up of some contextual background, brief outlines about the central project elements, two key stories, some figures, and a budgeted timeline. There is much more behind this report; to dive into more detail read Ed the author’s blog, or contact him directly with questions.

It is a big thank you to our funders, Tudor Trust, for giving Transition Network £50,000 for an unspecified and unknown web platform. We feel that we have used the money sensibly to build the new platform and open up new channels for the movement, and hope that Tudor feel that they made a good investment.

Another purpose of the report is to encourage other people responsible for web projects to do it themselves; take ownership of their project, accept the unpredictable outcomes and have a more resilient, affordable web system than an external service provider could produce.

(Picture: Most of Transition Network staff and board after web project approved, June 2009)

This blog post has the introduction and the context and role sections (without the nice pictures). It does not have the other sections on:

For those you need to download the documents below:

Working in complex situations on multi-stakeholder systems can be like being dropped into an intimidating forest, but seeking others to do your work isn’t the answer! In this sense, the report hopes to be like a breadcrumb trail in the forest, left by a group who mapped their context, and want to support others who doing the same thing.

The big lesson from our experience is that it would not have been possible to have predicted where we would be now, then. Because so much changes as you progress.

If we had produced a detailed and fixed project plan with a product roadmap (which we could have done) it could have felt reassuring in ‘the deep in the dark forest days’ of early 2009, but it would have been wrong for late 2011.

The web project we see now has grown out of experiences and connections from all of the stakeholders, working together in a ‘constellation’ on and offline, facilitated rather than project managed, in iterative technical and social loops hung together with communications and agility, rather than control at its core.

This is illustrated with the two case studies which show that our two biggest products were at best just twinkles in peoples’ eyes in 2009, and the result of exploring the connections between people and ideas and technology, rather than having a big vision, then trying to predict, control and micro-manage the future and the unknown.

This is also a thank you to all the staff at Transition Network, the Transition Technologist group, and all the Transitioners who got on board with the project, all of whom worked on an un-defined project that deliberately tried not to control the future, but share responsibility for understanding and optimising the present.

“It gives a wider perspective on transition activity than the local group can achieve. I think it is important to continue showing the bigger picture and offering encouragement to local groups as it can sometimes be a struggle to remain upbeat.”

“Helps us remember that we’re not alone, because it can be hard to keep up the big effort required.”

A great deal has changed since the web project officially began. Indeed it could be argued that ‘change’ itself is accelerating in a world that seems to get more and more bizarre and challenging every day. 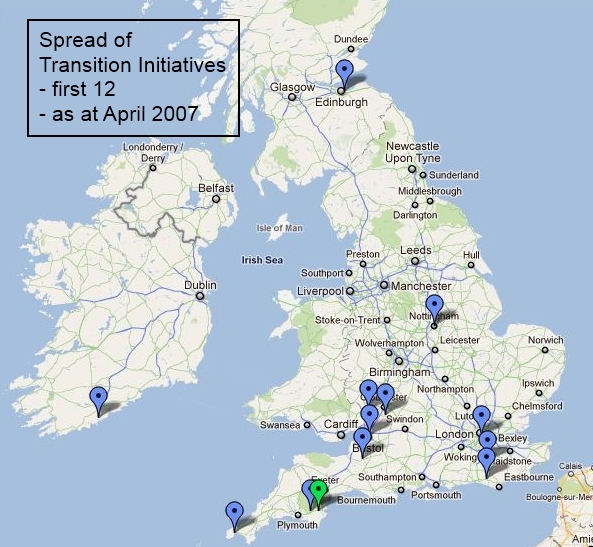 Amid this context, the Transition Towns movement has grown rapidly in numbers and matured broadly in concept. Every day there is something new from somewhere new. Initiatives are springing up all over the world facing different challenges with different people trying different projects in different cultures, with different needs.

Needless to say, Transition Network offers pragmatic support for the emergence of the movement; it is grassroots led so we do not seek to control it. It is a highly charged and creative environment, making for intense professional and personal challenges. There is never a moment at which things are quiet, or ‘the same as yesterday’, or something is not urgent, or brand new and requiring immediate action.

Thus the web project began in an endlessly changing context.

Unlike a standard organisation, it is keeping up with a movement that is moving too fast and unpredictably to second guess. This is a challenging situation, particularly if you try to predict what ‘web product’ a movement will need in the future.

In light of this, the web team focused on three interconnected things:

In this plan, the platform could be extended in many directions with a facilitation model to handle the social requirements arising and share the power among the users. Then, ultimately, the Transition Network ‘website’ could move from being a highly visible, central website owned by Transition Network toward a transparent web service, moderated by Transitioners to support and promote the initiatives websites.

(diagram to explain the wide array of Transition related activity on the internet, and how the Transition Network website is not in the middle of it, preferring to see itself as part of a ‘constellation’ supported by a ‘Sharing Engine’ using web standards and services)

This worked for us. Transition Network is comfortable with navigating the unknown, and changing plans when the need arises, rather than sticking to one grand plan.

Importantly, it also promotes the concept of accepting responsibility for unknown outcomes, successful or not successful, without blame. This means that individuals carry great responsibility in the team, but not fear of blame in case of failure; indeed ‘failure’ is seen as an entity where no learnings were extracted from an unsuccessful piece of work.

This is common sense to us, but we found that it is contradictory to most organisations’ web strategies, which are there to reflect a central institution’s self-image, and indeed, many people’s expectations; we are trained to respect centralised power. Our plan had been from the start to challenge centralised power – especially our own.

After an initial burst of work to get the platform up, technical work was handled in focused phases with small budgets, delivering required enhancements and maintenance, identified by the users and prioritised by the web team.

“… It keeps me well intentioned, to create something that the world can believe in. I am so excited when I see my project featured on the side of the projects map, after adding content to my page. This keeps my project exciting, that there is a global network which my project is connected with, despite its small size. This is good, I believe, because despite its small size, the potential is there for great ideas to spawn. thanks, so much”