Last weekend, Transition Network’s Rob Hopkins and Filipa Pimentel travelled to Brest in France to take part in an event called Village Climate Déclic (which according to Google Translate means “Climate Village Click”). It was a weekend event organised by Brest Metropole and Ener’gence (local energy and climate agency), who had created an amazing weekend celebration of all that is happening in the area in response to climate change, and also to dream of all that could still happen as they build up to redrafting their climate plan. Rob reports on how their time their went:

On Saturday morning, before heading to the venue, the TV screen in the hotel was showing rolling coverage of the ‘gilets jaunes’ demonstrations in Paris. Angry about taxes on diesel proposed as part of President Macron’s climate change strategy, hundreds of luminous jacket-clad people were smashing central Paris to pieces amid clouds of tear gas.  Clearly wanting to make a day of it they were already building barricades and lighting fires while I was still eating breakfast!

While there was clearly infiltration by the far-right, it is also evidence as to why any climate solutions need to also have social justice at their heart.  It was a shame though that the school strikes by young people taking place around the world about climate change, or the massive demonstrations in Belgium about climate change that took place the following day, failed to attract the same kind of rolling TV coverage. 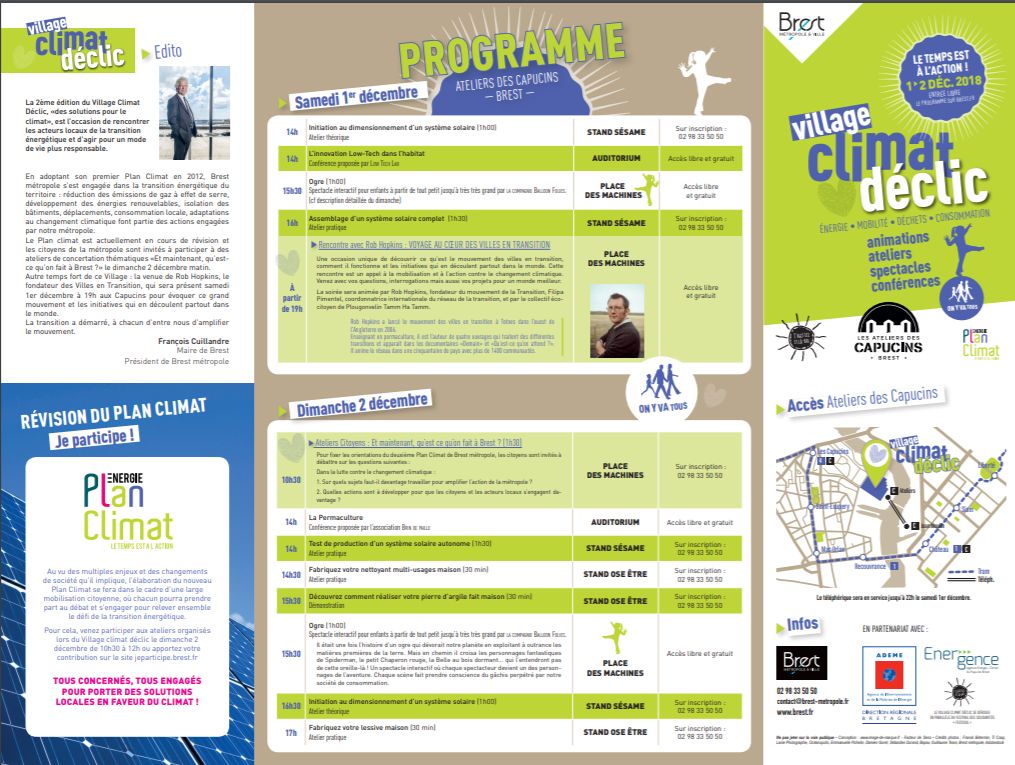 We headed over to Les Ateliers des Capucins, a former ship-building factory that has been converted into an exhibition centre and space for all kinds of events.  The ‘village’ in the event’s title referred to a kind of expo of local groups and projects.  We spent time wandering among the stalls, showcasing community energy projects, the city’s local currency, all sorts of projects doing cool stuff with waste, lots of things for kids to do, some great green building stuff, a fantastic urban agriculture organisation, an organisation promoting cycling, energy efficiency organisations and many others.  Brest is certainly not a city that could be accused of not doing anything! 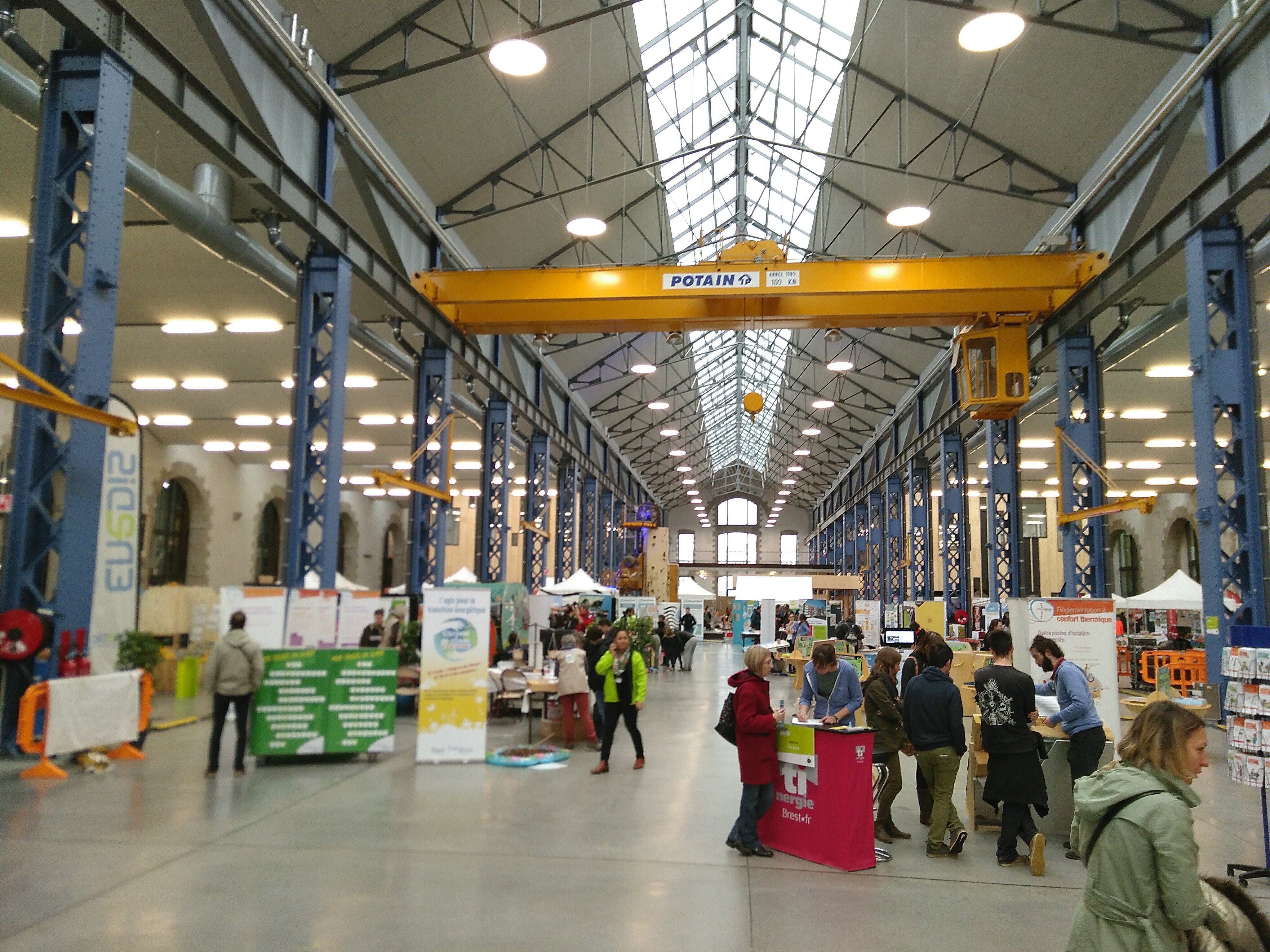 We spent time at a stall of a great organisation who take out of date vegetables from local supermarkets and then work with primary school children to make soup.  My parsnip chopping was, I like to think, a contribution, albeit a small one, to their work. 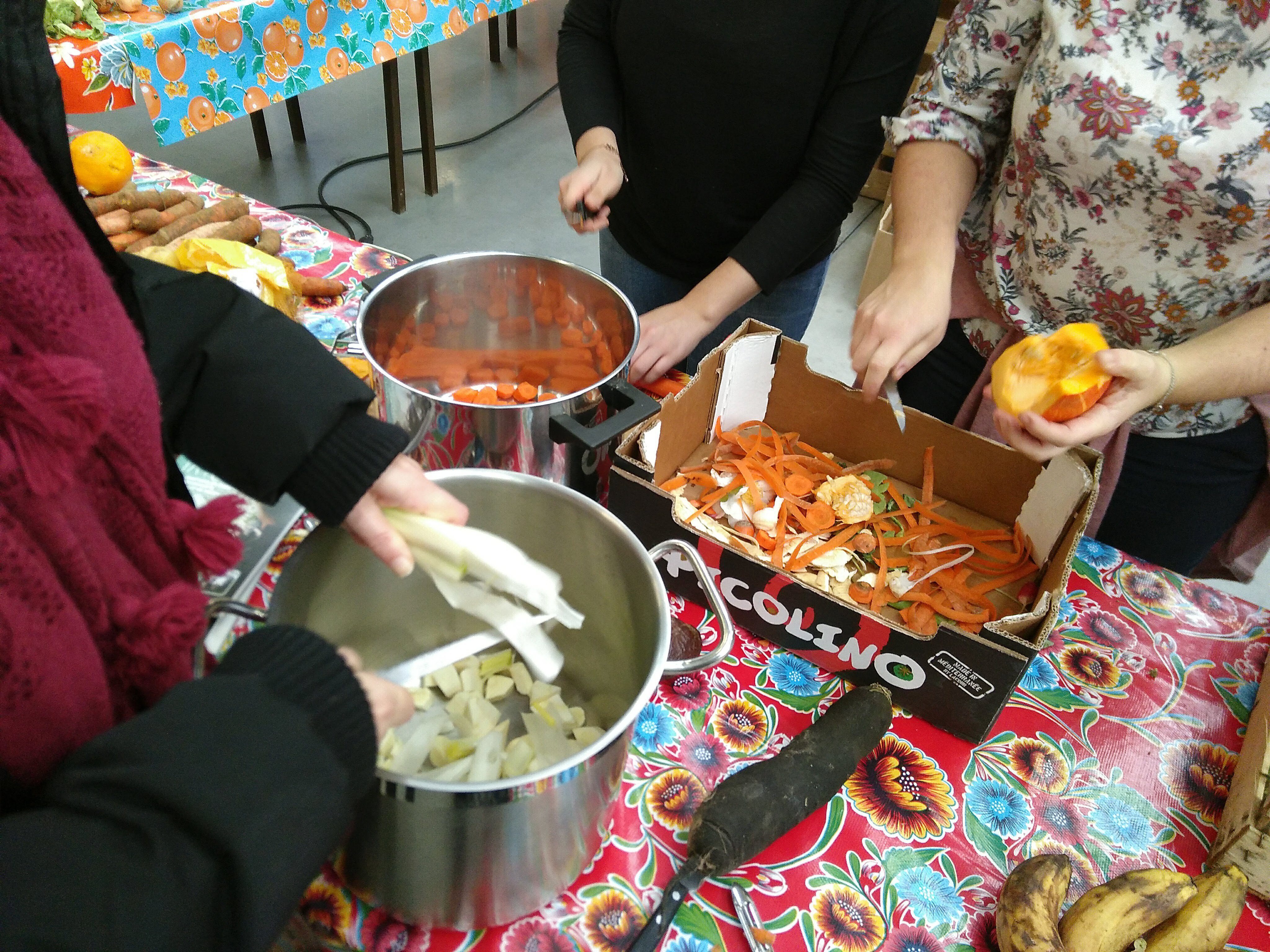 Then we wandered around the library, which is in the same venue. It was, I have to say, the best library I have ever seen.  Just amazing. I am currently reading Eric Klinenberg’s book ‘Palaces of the People’ which is, among other things, a joyful celebration of the role libraries should be playing at the heart of our cultural life.  Living in a country whose libraries have been smashed against the rocks by 8 years of Tory austerity and spending cuts, walking around this library was a revelation. It really did feel like a palace. 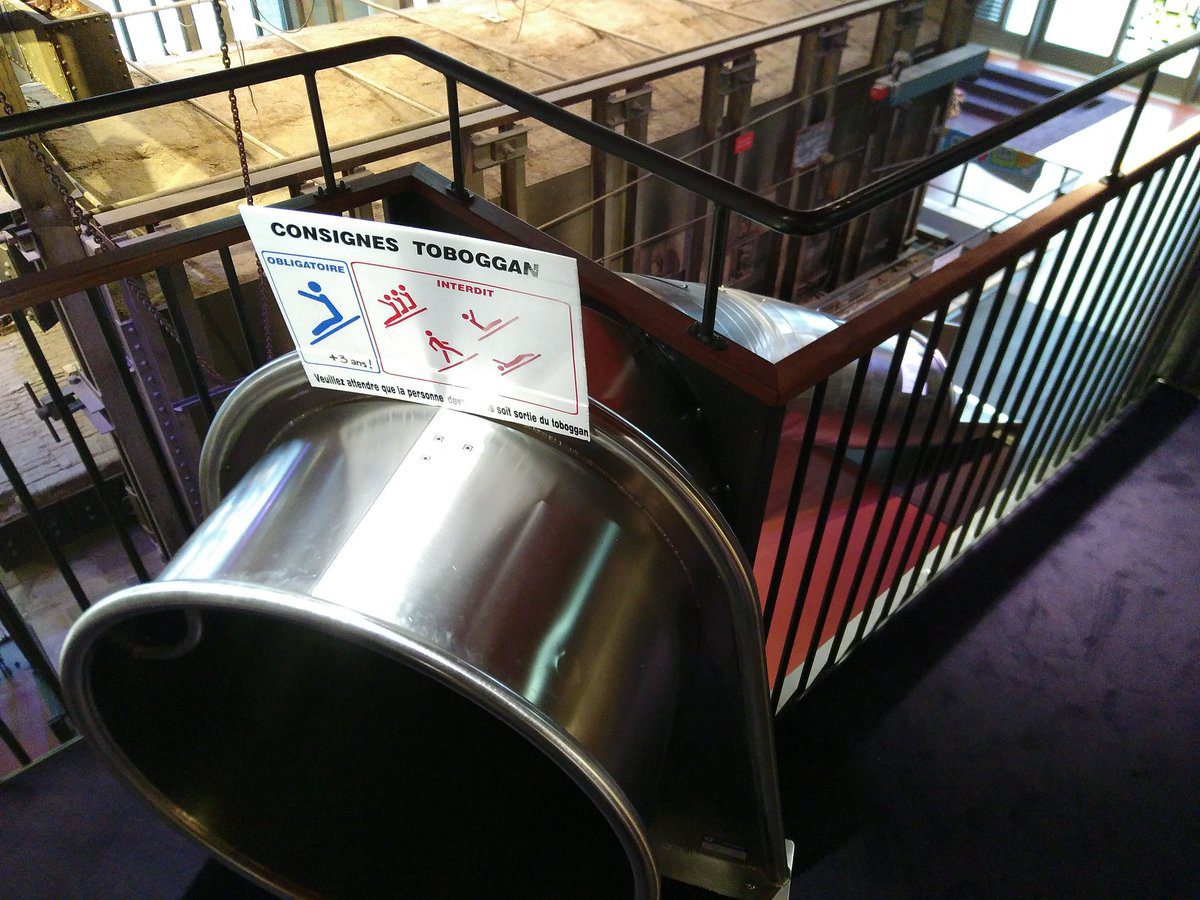 A library with a slide! 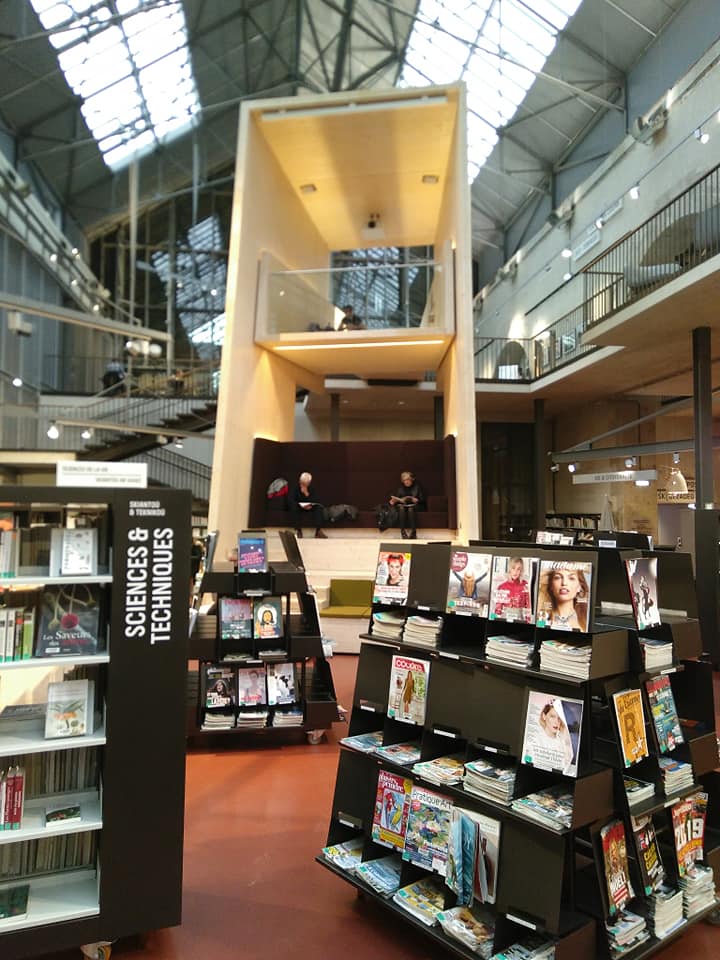 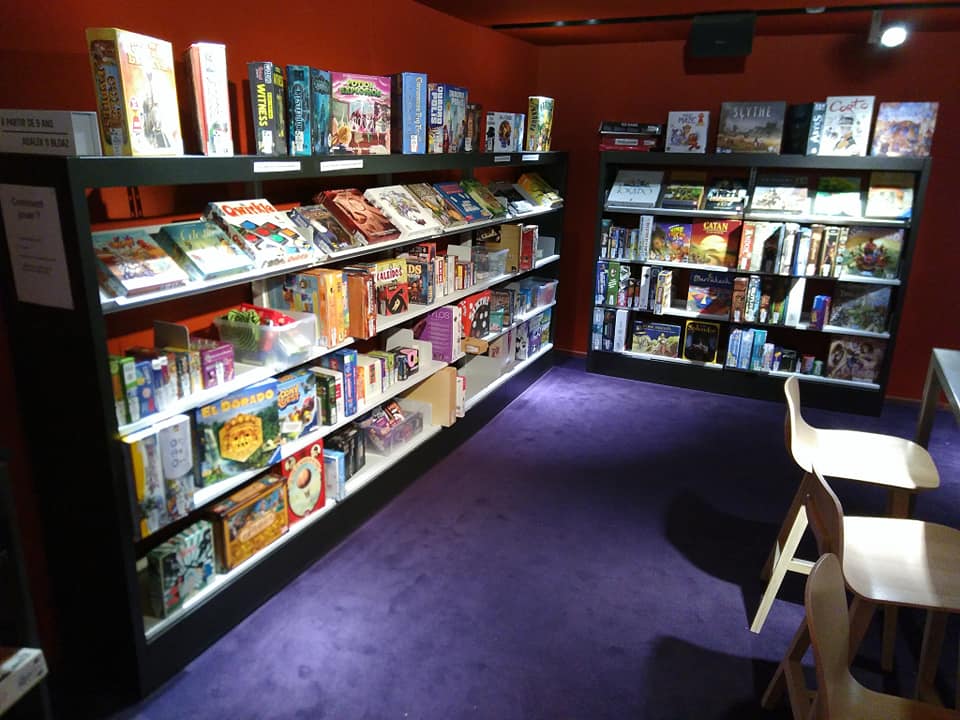 A beautiful space, it created some amazing comfortable places for people to sit and read, featured photography exhibitions, a video gaming area, a board game area with every game imaginable, a CD collection that actually featured music you would want to listen to, a great selection of films, a keyboard for people to practice playing (with headphones), quiet study areas, less quiet hanging out areas, and so many books.  And a slide, to get from the first floor to the ground floor.  A library with a slide… I fell back in love with libraries again. 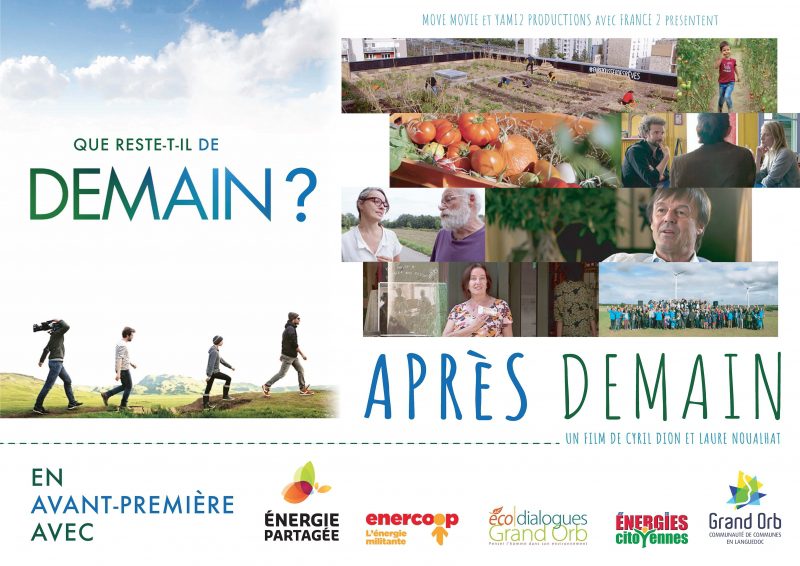 Then we went to see Cyril Dion’s new film ‘Après Demain’, the follow-up to 2015’s smash hit ‘Demain’.  Après Demain picks up the story now, reflects on the impact the original film had, what it inspired.  It travels to see projects that were inspired by, or boosted by, the film.  One of those is Ceinture Aliment-Terre Liégeoise which I’ve written about before.  But it also showed amazing rooftop gardens in Paris, a great local currency, and much more besides. And I was in it again, much to my surprise. It was inspiring, moving and re-energising all at once.  It goes out on French TV in a couple of weeks.  Do see it if you can. 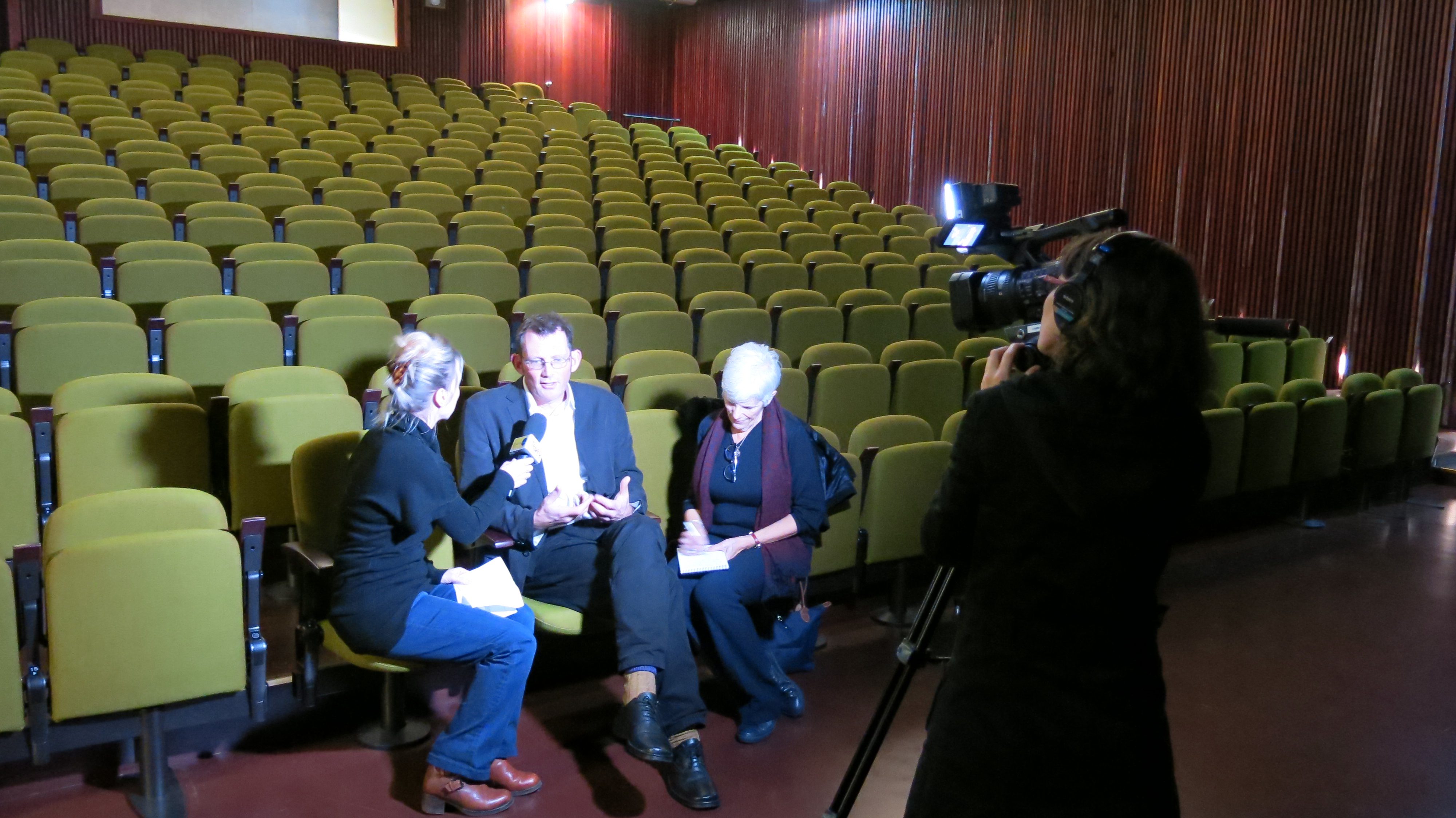 After doing an interview for local TV (see photo above), I met with some representatives from the municipality and we went round the village again, this time having more detailed conversations with some of the stall-holders. 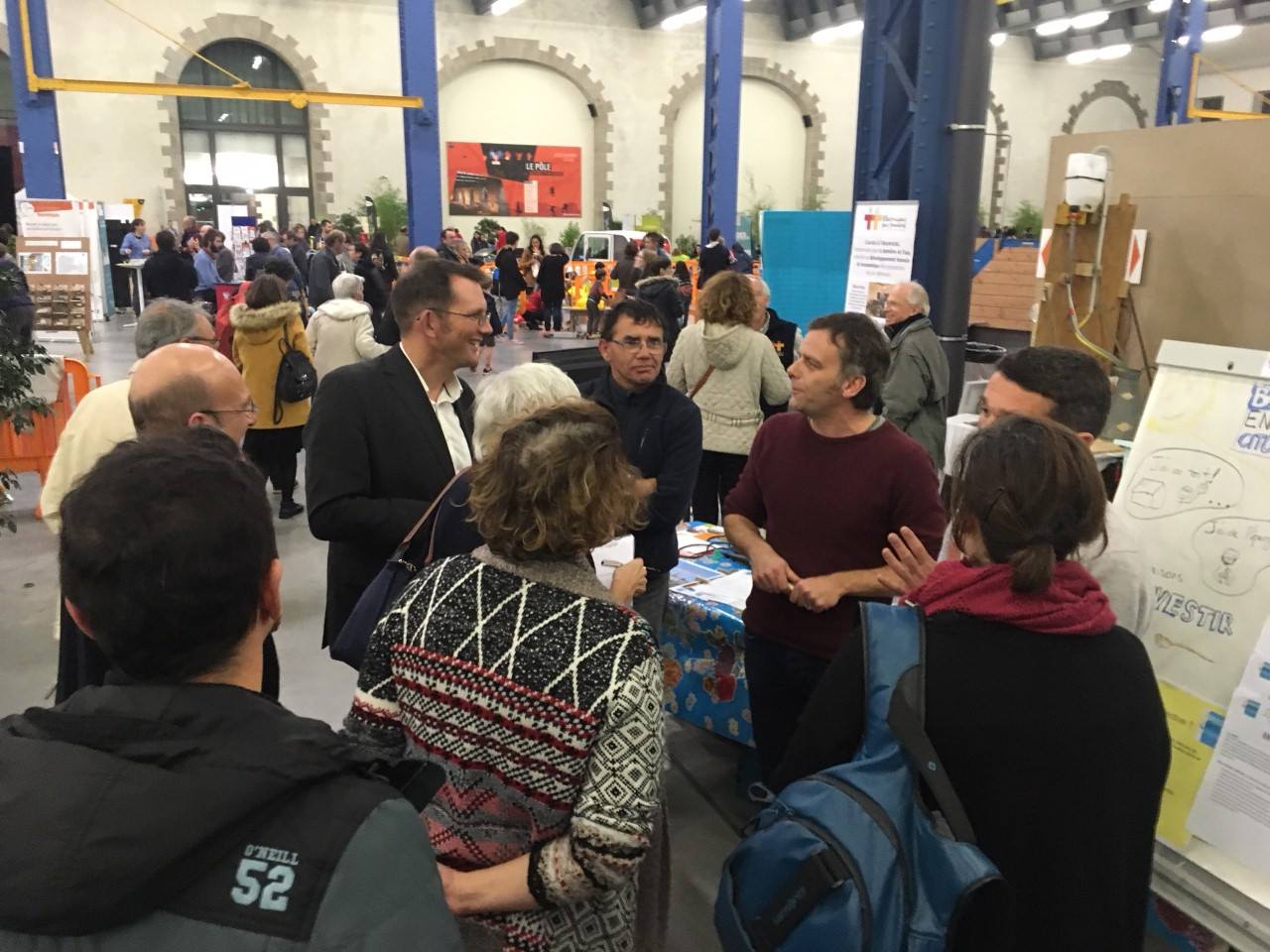 Then it was time for the evening’s main event.  I was to give a talk, and the organisers had expected about 300 people to come.  In the eventuality, over 600 people came, and they were delighted.  Aided by translators from the local Transition group, Tamm Ham Tamm (from Plougonville) I talked for about an hour about stories from across the Transition movement, and why the imagination is so important in these times. 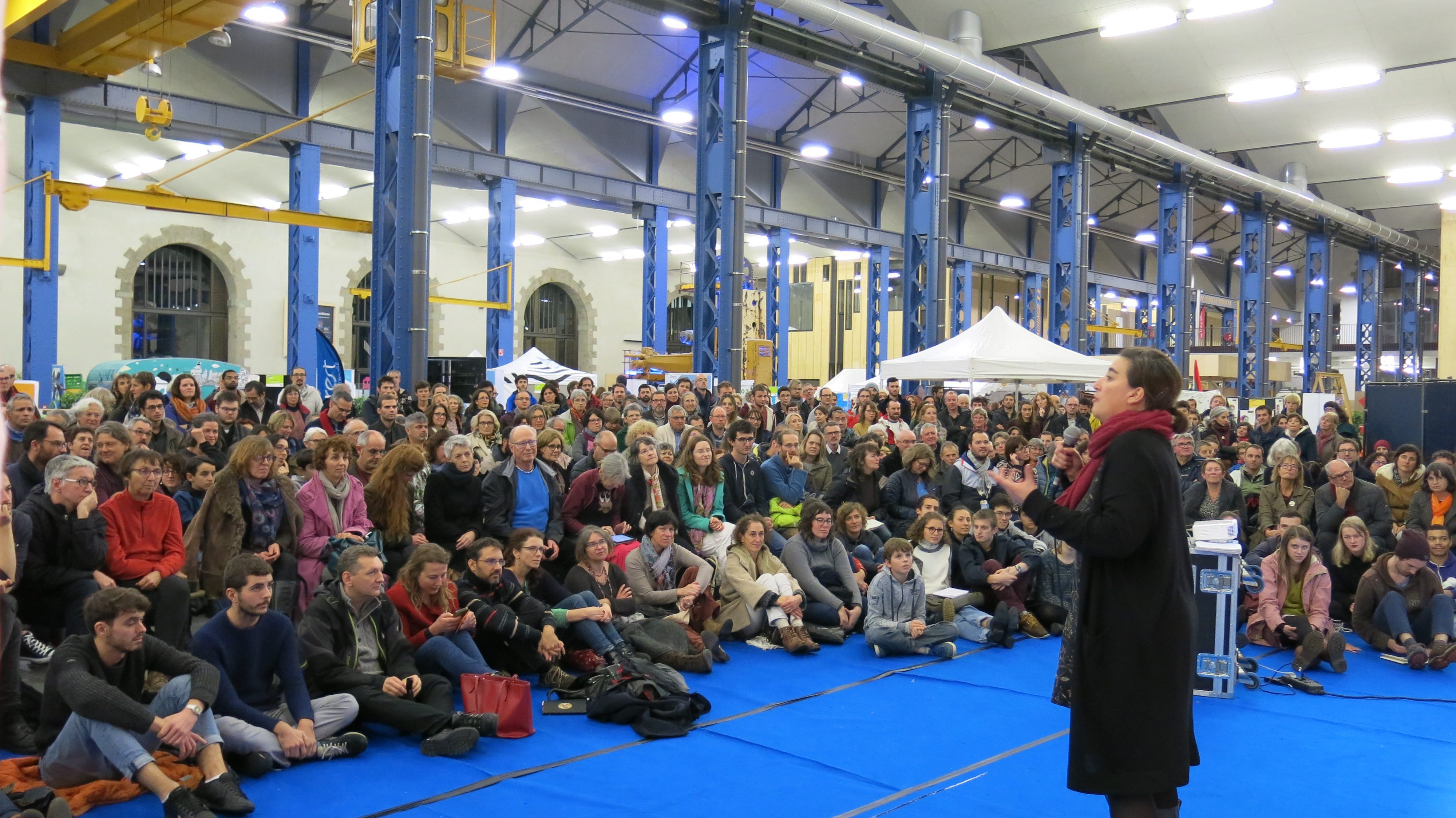 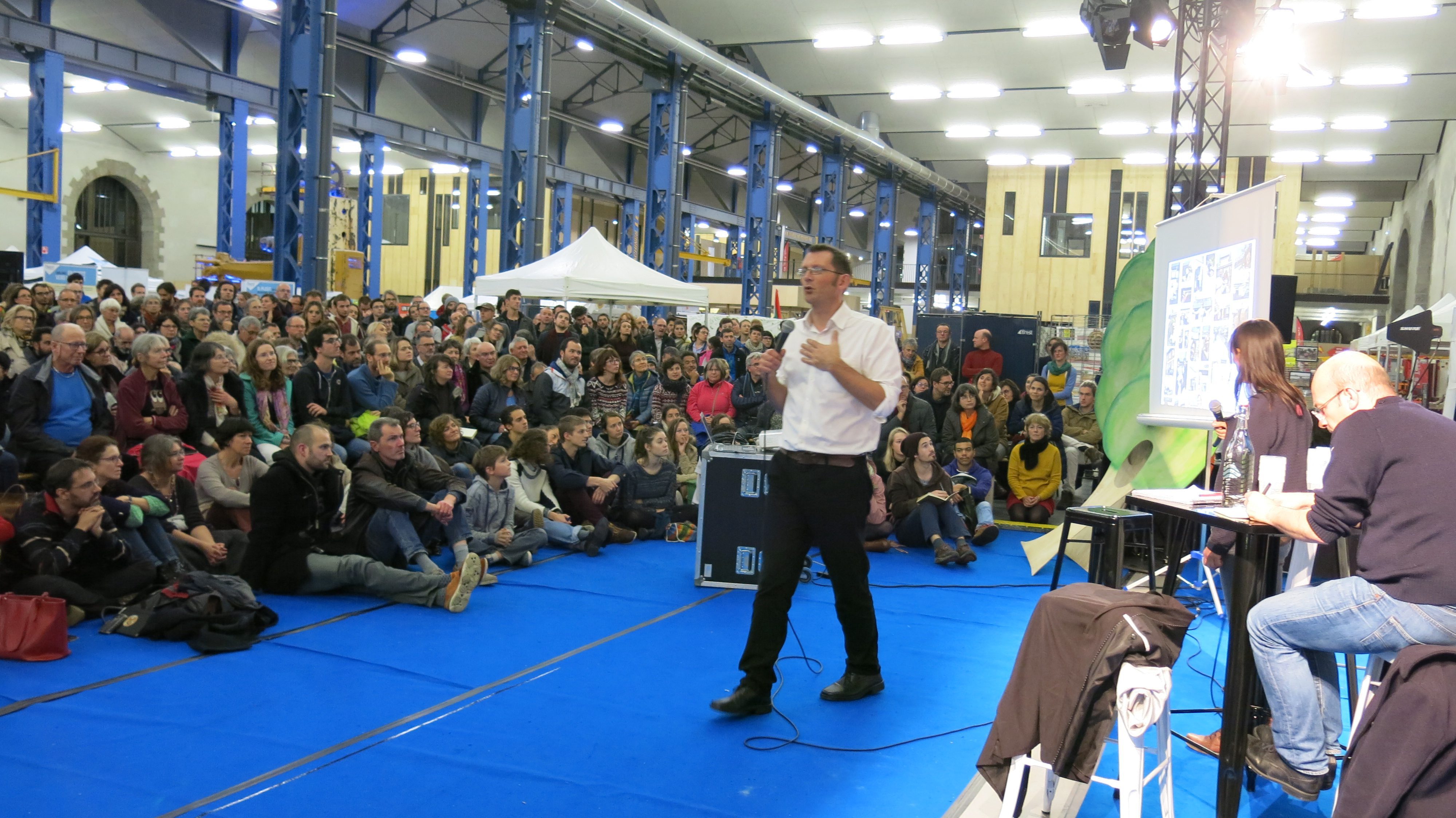 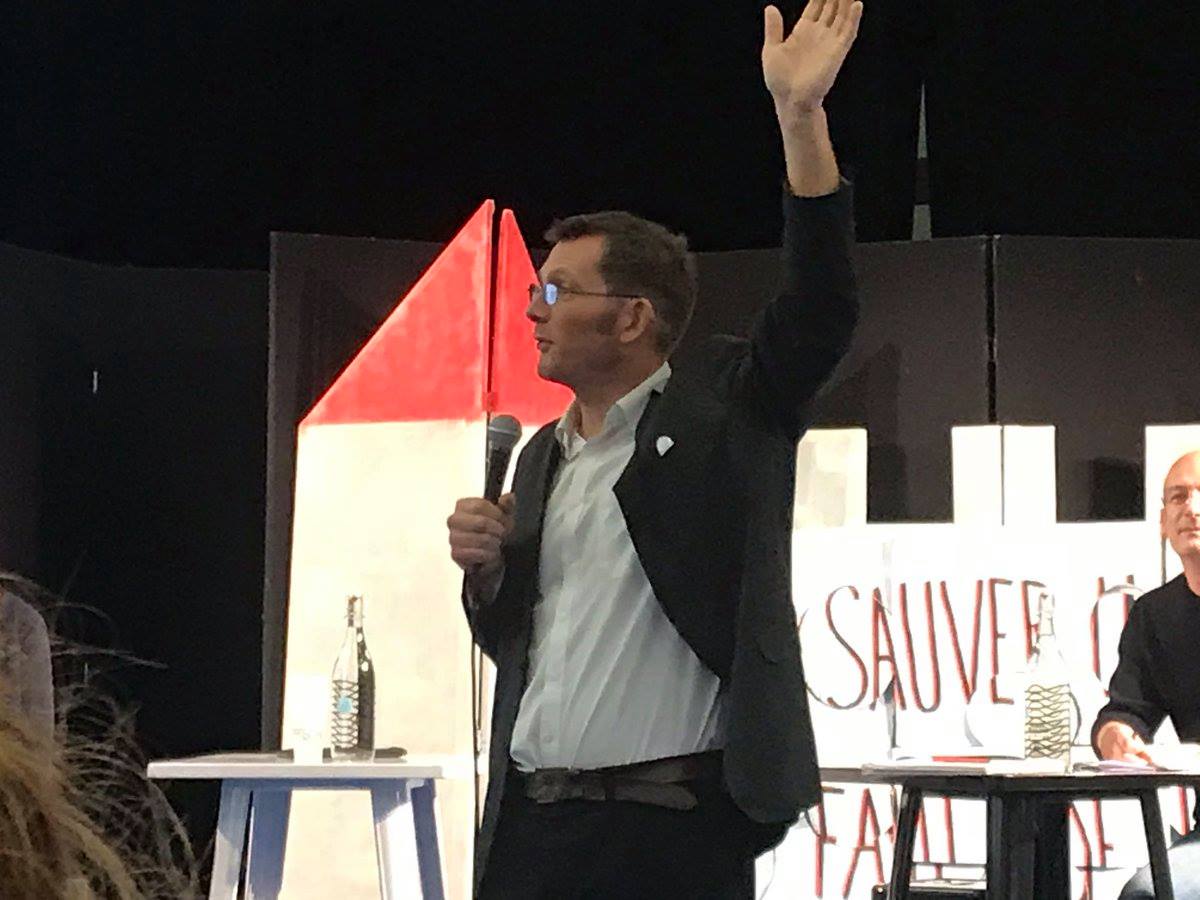 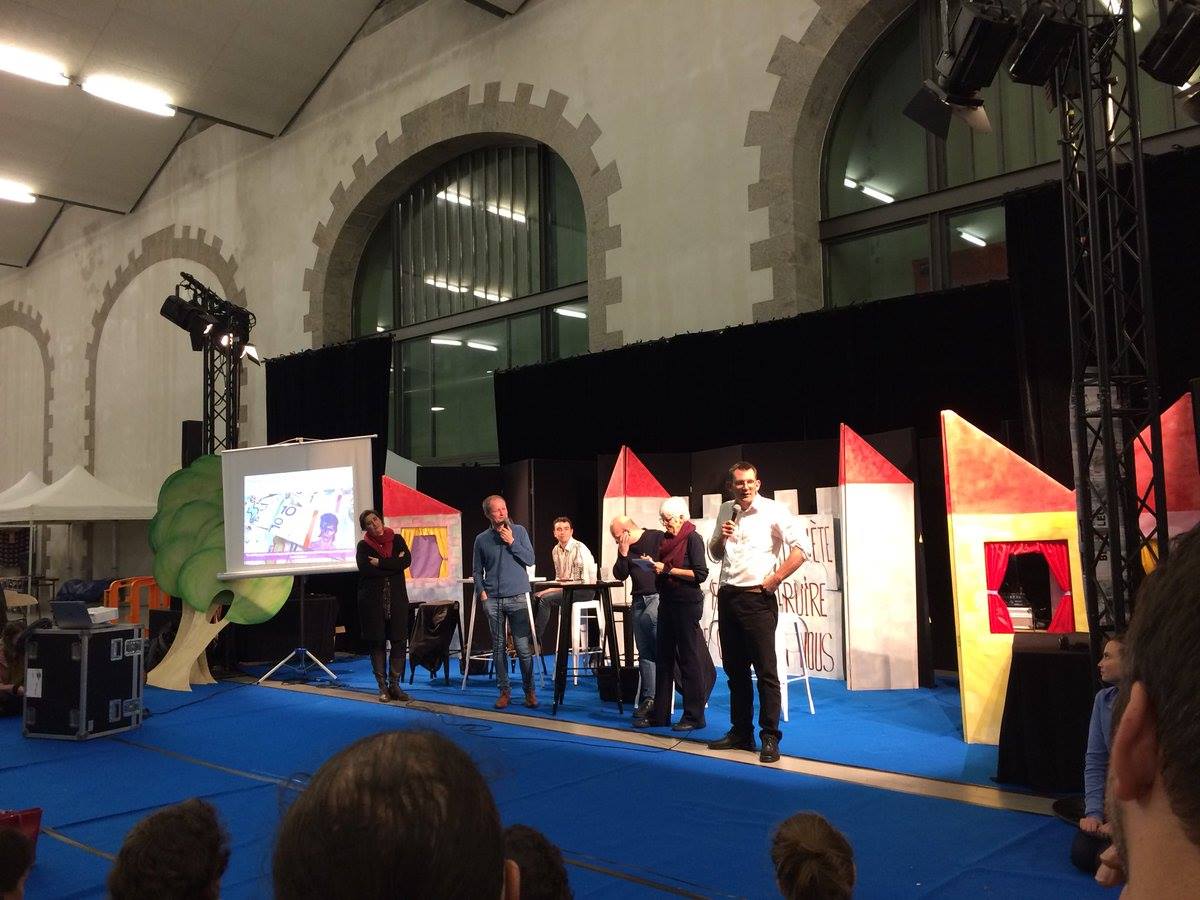 Then Filipa talked about the movement more widely, about what is happening globally, and the networks available to support people.  Then Laurent from Tamm Ham Tamm talked about what they are doing, the different projects underway.  The evening closed with questions and discussions until we ran out of time.  It was a lot of fun.

It all ended with a meal with the organisers in a restaurant in the centre of Brest which we shared with a big group of very drunk rugby players (I presume) whose increasing loud and raucous singing rapidly rendered conversation impossible, and brought the evening to a slightly premature close.  Mind you, it never felt threatening.  If you were in the UK and the thing started up, chances are it’s only a matter of time before tables start flying through windows. 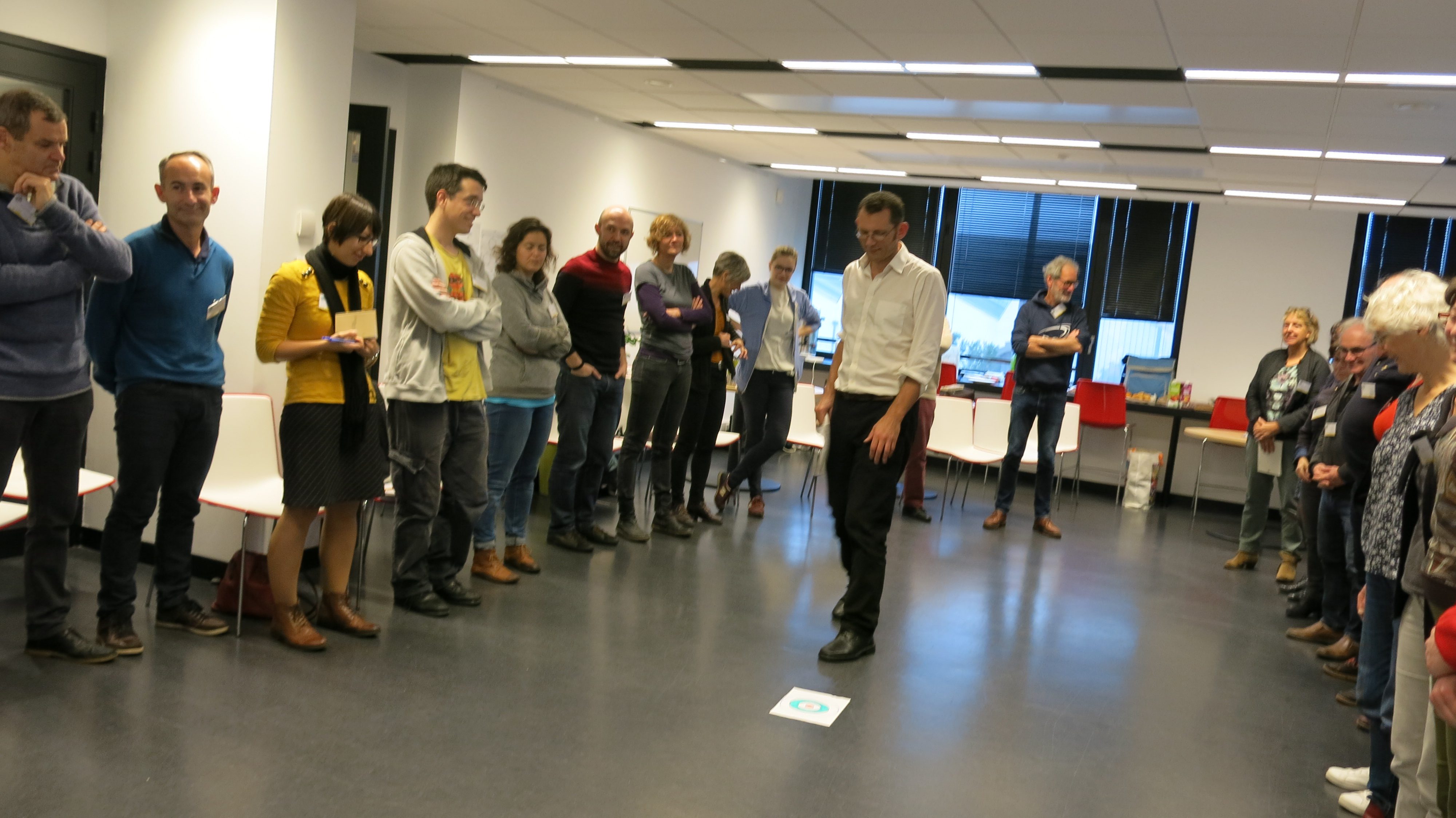 The next day we ran a workshop with 40 Citizens who have been trained by Ener’gence to become energy-saving ambassadors in their communities.  The idea was to give them some insights and tools from the Transition toolbox that might help the, while also bringing a dose of reenergising to them.  It was great fun.  We did go-rounds, think-and-listen in pairs, ‘mapping’, a beautiful imagining exercise and Open Space Technology. 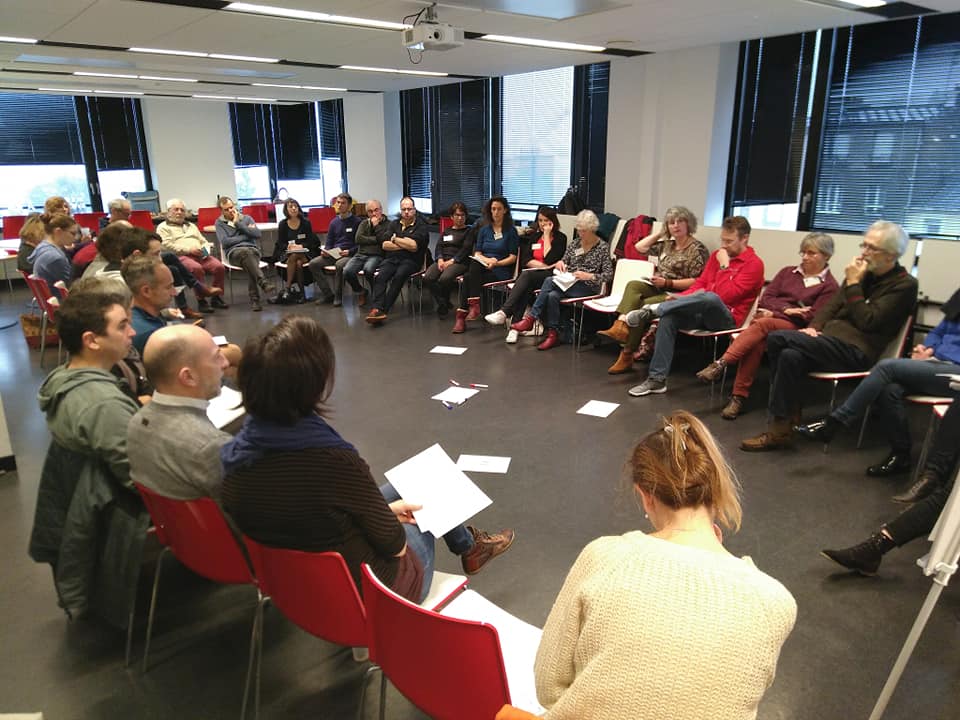 The imagination exercise was the one that stayed with me the most.  I had heard about the idea from the late Transition activist Adrienne Campbell but had never actually tried out myself.  I invited everyone to form into a long line all facing in the same direction. I invited them to close their eyes. I asked them to imagine that in front of them is a door, a kind of a magic door to the future. It is a door that crackles with static, it feels like a powerful portal, something extraordinary.

I tell them that when we step through this door we will be stepping 20 years into the future. They will be stepping into a future which has been transformed. It is a future that came about because 18 years ago a tipping point was reached, where massive, popular demand for governments to take the lead on rapid, effective and dynamic action to remedy climate change, social isolation and injustice led to rapid and previously unimaginable change.

Everything became possible. Principled and determined people were elected. It was a time of vast ambition, purpose and imagination. Communities responded with brilliant imaginative action in neighbourhoods and communities across the world (having seen ‘Après Demain’ the previous day really helped). A new economy emerged and bloomed. “When you step through the door”, I told them, “you will be stepping into that world, with all your senses”. I then invited them to take a step forward…

I let them stand for a while.  There were silent, happy tears. After a minute or so I invited them to share anything they are seeing or feeling.  “There’s so much more birdsong”, said one. “There are no cars”, said another. Slowly but surely the reflections started pouring out.  “Everyone feels so much more relaxed”. “The city is so green, there are plants and trees everywhere”. “There are bicycles, lots of bicycles”. “From my window I can see fields of crops”.  “There are food gardens everywhere I walk”. “I am walking among lots of happy children playing”. “The streets are full of people”. “I see many solar panels”.  “There are no homeless people”. “There is a lot of activity”.  “I hear laughter”. “There are no big shopping centres anymore”. 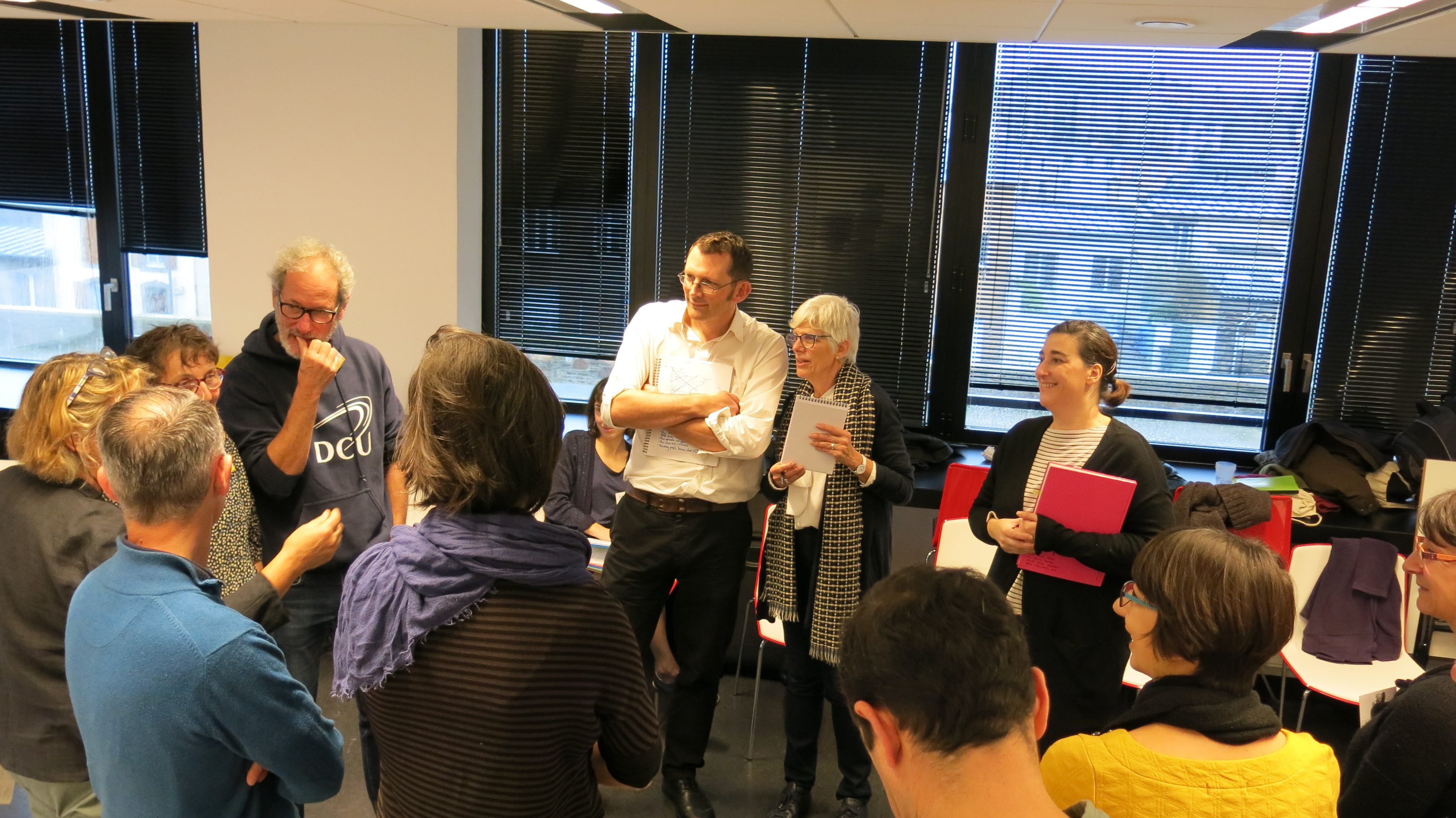 There was a charge in the air, people were deeply moved by what they were experiencing. It really felt like we were transported to another place. Several minutes passed, of imagining and reflecting.  Then it was time to move on. Having not done this before, I felt conflicted about how to draw the exercise to a close. Should I say “and open your eyes” and leave them in that world, or bring them back to now? In the end I decided to invite them to step back into the present day, but to know that what they have seen, experienced, taste, heard, felt and smelt is always there as a possibility in front of them.  They stepped back, with a collective groan at having to leave it behind, and a wistful sigh. We debriefed, and heard peoples’ stories about how magical it felt.

One man talked about how initially he felt sensations, but that his rational mind kept wanting to come to the fore and override his imaginative mind, and it was a struggle to stop it from doing so. One woman said she felt astonished by how powerful she found it.  One older woman reflected on how blocked we are in our lives to think of the future in this way, and how liberating it felt to get beyond that blockage.  Another said it was so nourishing that visualising the future in this experiential way should be a daily practice, that everyone should do it.

The Open Space activity also went really well. In the closing go-round people talked of gratitude, of how moved they found themselves by the day, how they felt renewed optimism and possibility, and how much better connected they felt to their colleagues.  A lot of love in the room. 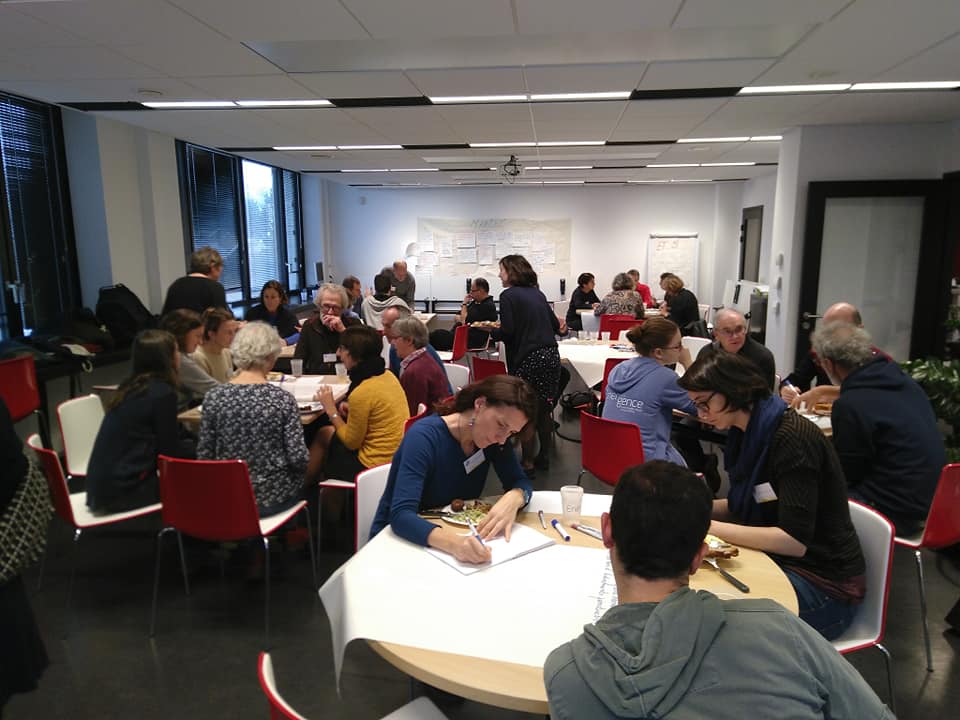 And with that, off we dashed out into the Brest drizzle and mist to head to the station and the long train journey home (when told that I don’t fly and always travel by train, one local councillor told me “that’s great that you’re doing that.  But I won’t”. Fair enough).

So my thanks to all the organisers, to the translator Janet Carnot, to Sylvie, Dominique and Fabienne at the Ecology team of Brest metropole who were amazing and such great hosts, to the many lovely people I met there, and to Filipa.  Thank you all.