Like many Transition groups we have spawned different subgroups at different times to meet particular interests and concerns. The Energy group has been going for quite a while and what picked it up was putting in a bid for government Local Energy Assessment Funding. This brought out some new talented people, who have run businesses and charities, a Nobel prize winner on climate change, Cheshire Groundwork as fund holders, and got us a successful bid. In turn that brought in staff time to get out publicity, recruit a lot of new volunteers to use thermal cameras, and advise householders.

We discovered that neighbours are far more approachable as they trust us. The sorts of faulty insulation, dodgy double glazing and poor advice we saw showed why salespeople don’t have a good reputation. It was really frustrating when people had turned down free cavity wall insulation too though, and exciting when we came across a 1900 house with really effective cavity wall insulation (there are a few around Wilmslow with this). 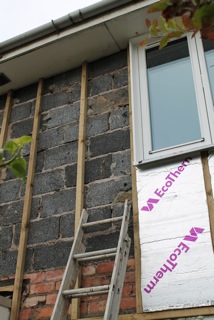 Once that job was over we have done stalls in the local market, promoting our top tips for energy saving – and now we have teamed up with the local area partnership to form a separate LAP energy group to try and help the council also deliver effective energy reduction. It has brought in a major local social housing provider, local town and parish councils, and the fire brigade too. This has got us funding for electricity monitors to be borrowed in the local libraries – though I wish we’d done more talking to others who have done this to get a better package for people to use… And a bid for Awards for All to try and bring in more people to survey houses and get another thermal camera. What next on this front will depend on funding and time.

And whilst a few of us have done a lot of the direct stuff to deliver improvements, we have had some fun being creative too. Our next fun initiative is to have a pot luck low carbon supper – with people bringing in an item of food with a card to show how it was made to keep energy use low, whether raw food, thermal cooker, hay box, microwave, or something else clever. Any excuse for a party!