Richard Barnett of New Forest Transition tells the story of their beginnings:

“During the autumn of 2007 discussions started between a local B&B owner and the Tourism Manager at New Forest District Council about how to strengthen and protect the local community and economy of the New Forest. They had an awareness of the concept of Transition but not much knowledge about what it really entailed.

The initial discussions were widened to include others in the area who shared environmental concerns and the focus became how to create a group of like minded people who might help others to embrace sustainability.  In March 2008 Green Books sent a copy of newly published Transition Handbook to another local B&B owner who also wrote book reviews for a web site called Ethical Junction. The subsequent review (possibly the first to be posted on line after the book’s publication) caught the attention of the local Friends of the Earth group. As a result the reviewer was invited to join the small discussion group.

The Handbook proved to be the catalyst that was needed and the group decided quite quickly that they would work towards the creation of a New Forest Transition group. The plan was to create a platform for attracting people from all across the Forest area (some 200+ square miles). And it was the nature of the area that took up a lot of discussion time in those early days. Unlike a distinct town or city, the New Forest comprises a dozen or more communities all with their own identities but connected by the overarching New Forest. Some of these communities are small and some quite large and the question was how a Transition Group representing the area could assist all of them.

In the end it was decided that the best way forward was to set up a Hub that would help to generate activity across the New Forest (see diagram below). The discussion group which was, in fact, the embryonic Hub, had people on it from communities, churches, the Forestry Commission, private business and the two big statutory agencies (New Forest District Council and the New Forest National Park Authority). This was important as it enabled both cross fertilisation of ideas and offered the potential for some funding for activities. 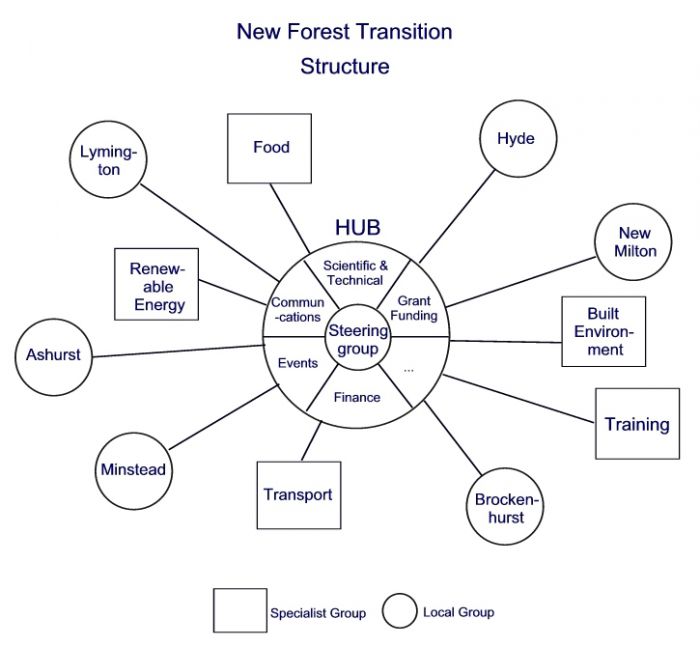 An event was planned for November 2008 which was to be called the Heat Exchange. The idea was simple. Invitations would go to everyone and every organisation that had an interest in environmental sustainability and the event, it was hoped, would bring together a dynamic group of people who would kick start the business of Transition locally. The Heat Exchange took place at Brockenhurst College (a local Tertiary college), the planning group crossed their collective fingers and………120+ people turned up!

An outline of the Transition concept was given to help give some grounding to everyone’s understanding and then after a local food lunch discussion groups were set up around key areas of potential activity such as Food, Transport, Energy, Education and so on. Each topic area had a discussion leader and ideas for projects were considered (see pic below).  The energy in the room was tremendous with many people expressing real relief that there were others living locally who felt as they did about the way things were heading. And it was obvious that there was a real desire to help make changes. It became clear that the idea of New Forest Transition group was not only possible but that it was important to many local residents that it was created. 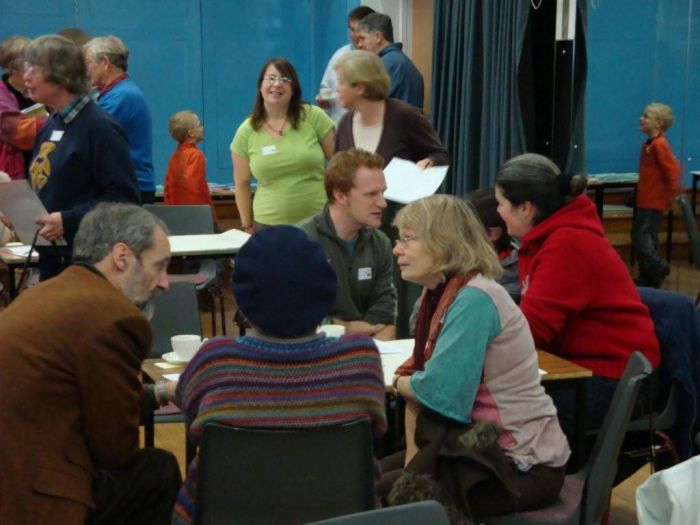 The Heat Exchange provided the basis for New Forest Transition and monthly meetings took place afterwards at which a Chair was elected and the group officially registered with the Transition Network (number 72 in the date order list of ‘official initiatives’).  The first project to get off the ground was on the topic of local food. The New Forest Food Challenge was based loosely on the Fife diet idea and aimed at promoting awareness of local food and encouraging more people to eat and grow more local produce. The connections between the Hub Group and the local statutory agencies proved very effective here and set a template for lots of further collaborations.

And the rest, as they say, is history!