For most people, Stratford-upon-Avon is about Shakespeare and tourists. It’s got a world-class theatre sitting by a pretty river, and old streets with old buildings offering all sorts of treats for visitors – of which there are millions each year. But it’s also home for 25,000 people, and the centre of a wider rural area with about twice that population. And among the local residents are those concerned for the future of the town as much as for its past.

So it was that in spring 2008, a Green Fair was organised to showcase what local groups were doing to make the town more sustainable. And a highlight was a talk from a representative of the newly-accredited Transition Town at nearby Leamington Spa: what was all this stuff about “peak oil”? The audience was interested, and people began to ask whether Stratford too should become a Transition Town. That autumn, a couple of those who had helped organise the Green Fair went to Totnes for Transition Town training, and at the end of the year a short film festival was run, showing films such as The End of Suburbia. Meanwhile, The Transition Handbook has been published, and being avidly read: how could we make Stratford a Transition Town? 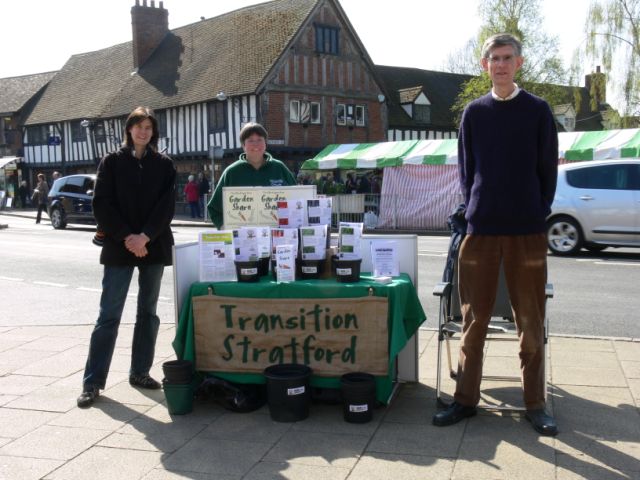 In February 2009, a public meeting was held to discuss the question: “Should Stratford become a Transition Town?” This brought in a wider range of people, including some who had not previously been involved in the developing Transition Town Initiative – including the then leader of the local District Council (though we suspected he came to keep an eye on things rather than lend a hand). There was an embarrassing moment when it was discovered that no one had remembered to bring flipchart pens – but when people were asked if they were prepared to help get a Transition Town going, more than a dozen came forward offering to help.

A number of initiatives flowed immediately from this meeting. One was a group which began to work on how Transition Stratford might be organised: what would be its constitution and working methods? Another was a group that started to organise an Open Space meeting about food in Stratford. And small discussion groups began to meet in a friendly local pub to talk about food, energy and the local economy.

The Open Space – How will Stratford feed itself in 2030? – took place in May 2009. Over sixty people came to the half-day event, which generated a number of ideas. One project, which had already got under way, was the development of a community garden on land attached to a local alternative therapy centre. This gave people a project in which they could immediately get their hands dirty! Two other ideas – to establish a garden share scheme and to set up a project to harvest neglected local fruit – took longer to get going, but both have now been running for nearly five years.

By the time the Open Space had taken place, a steering group had been set up and a constitution – developed from constitutions adopted by other Transition Towns! – was adopted. A stand was taken at the Stratford River Festival on the first weekend in July 2009 to give out information about Transition Stratford and its aspirations – and to invite people to get involved. There was clearly interest, and over 40 people were signed up over the weekend.

The steering group decided that things had gone beyond “mulling”, and an application was submitted to be recognised as an official Transition Town. Official recognition came through in mid-September, and one week later, Transition Stratford held its first Annual General Meeting, attended by over three dozen members. With projects being developed from the Food Open Space, and a second Open Space – Powering Stratford on energy (see great poster at the end of this piece) – being organised for October, the meeting celebrated the definitive launch of Transition Stratford!

Not to mention the film showings, talks plant swaps, work on allotments, and activities on recycling that Transition Stratford has organised over the past five years!

The way Transition Stratford works has also changed over that time. At first we took the ideas in The Transition Handbook as the guide, but soon found that there seemed little appetite for the topic groups on food, energy and the economy. As projects took off, people put their time and energy into these, and the groups have withered away. The bigger projects all have some form of management – Garden Share and Harvest Share each have an informal organising group, while Community Energy Warwickshire and Stratford Time Bank now have their own legal structures. Meanwhile, the Steering Group, which meets every month, manages the rest of Transition Stratford’s activities.  As ever, the crucial question is: does it work? And so far, for Transition Stratford, the answer is Yes.

Roger Matthews and other members of Transition Stratford