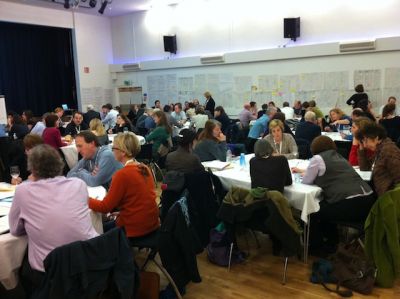 I’m just back from the Sunday Times Festival of Education at Wellington College in Berkshire where Michael Gove, Secretary of State for Education, spoke. I managed to put a question to him as part of the Q&A that followed and I thought you might be interested to hear his response as it indicates the government’s position on climate change, both in the curriculum and outside it.

This was my question:  “The Chief Government Scientist, Sir John Beddington, has said that by 2030 we will be in the midst of a perfect storm made up of climate change, the end of cheap energy, environmental degradation, population growth and a hugely stressed economy. In the light of this, the future that we are educating this present generation for, how can you consider removing climate change from the curriculum?”.

Answer (from my notes made afterwards): “Many competing ’causes’ want to be in the curriculum and schools should be free to choose what they teach. In the 1980s scientists thought that increased CO2 in the atmosphere would lead to an ice age and they were proved wrong. Given the fact that we do not know what the future holds we need to teach young people to cope with challenges that we currently can’t even imagine. Skills such as critical thinking, analysis of facts and figures, understanding of science etc. are more important than curriculum content.”

In answering a later question he referred back to mine by saying that climate change ranks alongside issues such as obesity and gun crime as a social ill. I later reflected that in preparing for the impact of climate change, peak oil etc. on the economy politicians are caught up in global trends and events over which they have no control and therefore find it difficult to take action.  It’s also clear that many schools look to the government to give them a steer over what is and what is not required to be taught, so removing climate change from the curriculum relieves the obligation to teach it.

Fast forward to this Tuesday, March 20th, at Baden Powell House in London. The membership organization SEEd (Sustainability and Environmental Education) http://www.se-ed.co.uk/ convened a workshop of educators to dive a bit deeper into the evolving National Curriculum Review and see if there is any mention of sustainability. [N.B. In the context of Transition sustainability roughly equates with resilience. Sustainability is really a weasel word because it is never clear just what we are sustaining and why, but is has become the shorthand for everything to do with climate change, peak oil etc in the world of education.]

When the Coalition government came to power they announced that they would re-write the National Curriculum for Schools, slimming it down and focusing on key knowledge requirements in a narrow range of basic subjects, thus freeing up schools to make additional choices as what they wanted to teach. Hence the line that Michael Gove took at the Wellington Festival. I am not going to summarise overall progress here except to say that it now looks like it will be 2013 before the curriculum is published. If you want to do your homework you can read:

So, as I said, last Tuesday over 100 educators working both within and without schools, united by a common interest in seeing all young people in the UK have access to learning for sustainability as a basic right, came together to discuss how we were going to make that happen. We had been promised a representative from the Department for Education who did not show up. We then did a quick flick through the Report cited above and were encouraged to find on Page 16, recommendation number 5: Promote understanding of sustainability in the stewardship of resources locally, nationally and globally. This looked promising until later in the day someone said they thought that recommendation had been withdrawn.

Thinking 150 years into the future; systems thinking; understanding how change happens; green enterprise; dealing with fear; nature’s rights; design skills (eco-literacy and bio-mimicry); intergenerational learning; sustainable cities and sustainable design; local eco-systems; deep questioning; inequity within and between countries. We also came up with a great list as to how all this learning might be approached, and thought about the hallmarks of learning for a sustainable world. Creating critical and articulate thinkers, design for positive change leading to action, and interconnectedness made visible through systems thinking came top of the vote.

What we did not tackle was why schools would want to take any of our suggestions on board. If the government is not giving a lead to schools to teach all the issues around sustainability (it’s not looking too hopeful right now), it’s up to schools themselves to fit this into the gaps in their packed timetables. Only the most committed teachers continue to find a way to engage with the issues that Transition addresses. If we look around for imperatives for addressing all the issues around climate change and the end of cheap fossil fuels there is a ray of hope, not touched on by the SEEd workshop. That is the Carbon Reduction Commitments (CRCs) which come into legal force this year.

Schools typically account for between 50 and 60% of the energy consumed by public services in a local authority. As part of new UK government legislation legally binding CRCs have been imposed on local authorities. Where targets are not met substantial fines are imposed so authorities will be putting pressure on their energy consumers to reduce their carbon. From this year, schools will also have to purchase carbon allowances to cover their ‘CRC emissions’ – known as Energy Tax. The price of the carbon allowances will be set by the Government every year and the price is likely increase to year on year as fuel costs rise. You can read more about this here: http://www.carbonreductioncommitment.info/crc-and-state-funded-schools.

The government has proposed that state-funded schools (including academies) within Great Britain will participate within the carbon reduction commitment scheme under the umbrella of their local authority. In doing so, it is the carbon footprint of the local authority that will be legally and financially responsible for participation in the carbon reduction commitment scheme, rather than the individual schools.

It is also the local authority that will be positioned within the carbon reduction commitment, rather than the individual schools.

The local authority will be subject to a number of obligations and duties including:

Local Authorities should be prepared to provide advice and services to schools, to ensure that they collectively reduce energy consumption, secure a high place in the CRC league and avoid penalties and fines.

So, to return to the Expert Panel’s report on the National Curriculum Review, we read that:

What clearer imperative can there be to include sustainability in the National Curriculum than understanding the need to change behaviour in schools in order to reduce carbon emissions and meet economic goals in a time of energy contraction? Let alone taking personal responsibility for the kind of future we want our children and grandchildren to have, however old we are right now?

If you have read through to the end of this blog, I hope it has been useful to bring all these related issues into one place. The Schools in Transition programme now has a tiny bit of seed funding to start the pilot. It’s not quite ready to be unveiled but I can reveal that it is going to be an action-focused and highly positive response to all the issues that have been raised in this blog and that the SEEd workshop discussed. More anon.