Over the next 3 days, we’ll be publishing the winners of our Transition Training competition, where people were invited to share stories of the course they did that changed their lives.  Thanks to everyone who entered.  In today’s first one, Jen Gale shares the power of learning how to use her sewing machine.

Just over 4 years ago, I signed up for a “Learn to Love Your Sewing Machine” course.  Having never touched a sewing machine before, not even at school, and believing that I didn’t have a creative bone in my body, I decided after the birth of our first child, that I wanted to learn to sew.

So, armed with my £50 Aldi special sewing machine, I tentatively embarked upon this 3 week course, and never looked back!  I went from being absolutely terrified of my sewing machine, to actually really loving it-just like the course title said I would. I quickly learned really basic things, like what a “bobbin” was, and how to thread it up, and then actually began sewing.

I quickly moved on to a Basic Dressmaking Course, and made, with a great deal of help, a skirt. Even once it was made, I couldn’t believe that I could actually make something that would withstand being worn, and even more, being washed, so it was with some trepidation that I placed it in the washing machine for the first time. But it survived.   And so my love of sewing and creating was born. 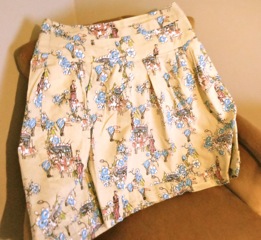 I started to explore all kinds of creative avenues that I had previously assumed where the domain of other people.   I made a wrap around skirt, on my own. It’s not perfect, but it is functional, and I started to appreciate the sense of achievement you can get from creating something that you previously thought you had to buy.

As I started to learn more and explore more, I discovered the wonderful world of ‘Upcycling’ and re-purposing, and fell in love with the idea of creating something new from something old. And the more I discovered, the more I got to thinking about the amount of ‘stuff’ that we consume. In our daily lives, and also in materials for crafting.

Yes, it will always be better to make something ourselves (rather than some poor unknown on the other side of the world, sweating away in dreadful conditions for a pittance) but why buy new materials, when there is already such an abundance of perfectly useable, and sometimes much nicer things to use?

The more I learned and thought, the more the mindless consumption that seems to represent our society, and maybe, our generation, just seemed so wrong.

So I decided that we (myself and my young family) should embark up on a year of Buying Nothing New. Primarily to see if it could be done, and also to make us think more about what we were buying.

On September 1st 2012, My Make Do and Mend Year began. I blogged about it every day, documenting the challenges and solutions of Buying Nothing New, and it has been the most incredible journey.  It has truly changed our lives.

I have learned so much. About where our food and clothes and ‘stuff’ comes from. About the resources that go into all of these things, the people who make them, how they get to our shops, and the HUGE amount of energy that is necessary to make this happen. And then that ultimately, it nearly all ends up in landfill. And that we are running out of landfill.

During the course of the year, we have been on a Rubbish Diet, I have helped to set up a Repair Café in my town, and run a Swish, not to mention appeared on the local radio, and TV, talking about the blog and my mission to get the world Making Do and Mending. I have spoken at a TEDx event, and the blog has even been featured in The Sun.

I have been taken out of my comfort zone, learned new skills, and embraced a whole new way of life.  I am now passionate about spreading the word, and encouraging other people to think about what they are buying, and ways that they can reduce their environmental impact.

My next project is try and set up a Transition Group in my local town, and hopefully really make an impact of my own community.  All this from the simple act of learning to sew.