Through Transition I’ve been active in my community for years, trying to help people understand the importance of climate change and how it could impact on the lives of them and others in the future. I’ve seen all the hard data, digested all the scary graphs, seen all the heartbreaking photos from the Arctic. I’ve heard reports from other people across the world what impact climate change is having on their lives and there’s nothing that I haven’t believed.  But up until this winter I hadn’t really felt the full effects myself. I was fairly confident that the weather patterns were changing and that this was directly linked to a warming global climate, but it was hard to pin point one event that solidifies those beliefs. This winter changed all that and one event in particular made me sit up and think very carefully about the future.

I grow organic vegetables on the Isles of Scilly. “That must be a great climate for growing” is usually the response I get from most people. “It can be” I say, “mild in winter, warm but not hot in summer, good light levels. But you wouldn’t want to be growing here during a storm.”

Some of my vegetable fields are literally just behind the beach. A great place to be in summer and the best ‘view from the office window’ you could hope for. But in a winter storm this position is something of a disadvantage! There is a decent sand dune between the fields and the beach in most places, but on one stretch there is not much more than a moderate hardy evergreen Pittosporum hedge between fields and beach. 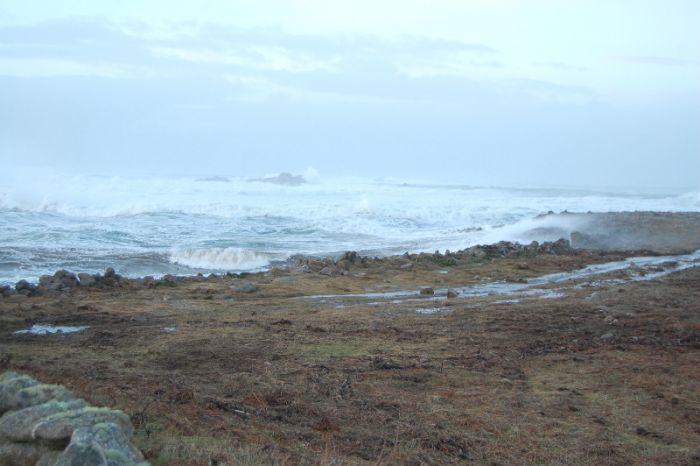 1st February brought an extraordinarily large and deep low pressure across the UK. The barometer dropped to 965mb on Scilly, the wind reached 80-odd mph and, to make matters worse, it was one of the biggest spring tides of the year. At high water the sea was reaching places you couldn’t really imagine it ever getting to. The swell was ferocious, driving walls of water in to the coast.

As I looked on, the fragile coastline between my fields and the sea was getting eaten away before my eyes. The trees making up the hedge, the only windbreak I have, were just toppling over and ending up on the beach.

Three days later on 4th February another enormous low pressure steamed in from the Atlantic, this time bringing winds of over 90mph (and I think over 100mph in west Wales). The tides weren’t quite as high but the coast again took a pounding, and I feared what would happen to my fields.

After further storms, lasting in to late February, the upshot is that I have thought about the future use of my fields in a very different way up until now. One more storm like 1st February will destroy the hedgerow and some fields will be completely open to the wind – and therefore unsuitable for growing vegetables. This could happen in 20 years or next winter. How do I plan my business around such uncertainties?

I could plant hedges inland from the existing hedge line, but these could take easily 10 years to establish, by which time the coast may have eroded back to there anyway. The island I live on is getting smaller by the year and some of its resources are being threatened – farmland, fresh water and potentially even transport links.

You could say that such events were freak weather events, perhaps a ‘one in 50 year’ storm. That could be right, but all the evidence points to this becoming a more regular occurrence and that the winter we’ve just had could be a taster of what we have to come regularly. If that’s the case then I have to seriously look at what I grow and where, because the most vulnerable fields are simply going to be victims of climate change before long.