What does Transition look like in a place with just 4″ of rain a year?  This is the challenge faced by Transition Joshua Tree (population 8,000) in the Mojave desert.   Dr Karen Tracy from the group told us more:

“Even without climate change, the Mojave Desert looks dry, daunting, and even fearsome. Here in Joshua Tree, average rainfall per year measures 4” (100mm). In 2012 we received less than 3” (75mm). Transition Joshua Tree (TJT) members know how precious are both the dwindling water in our ancient aquifer and the occasional gift from the sky.

Current levels of water use in California burn up a sizzling 19% of electricity use, just to pump water around! Importing water from the State Water Project (SWP) can only be considered a temporary measure. Source of SWP is 500 miles (almost 1000km) away in the Sacramento Delta! Joshua Basin Water District recently installed a pipeline at great cost; the pipeline was completed just in time for the SWP to cut off all allocations due to drought. Governor Brown officially declared a state of emergency on January 17 due to the severity of the drought.

Drylands Permaculture (the only reasonable response to permanent or mega drought) uses all the tools in the toolbox to change lifestyles around water use. Gone are the days when turning off the tap while brushing one’s teeth will address shortages. Time for industrial-strength water decisions.

Harvesting the rivers of rainfall, which erode our mainly un-paved, sandy streets during rare storms, has recently been a topic of discussion at Joshua Basin Water District. This is a much-needed step in the right direction. Intercepting rainwater before it reaches big gullies and dry lakebeds, only to evaporate, may mean long-term survival here is possible. That is a very big mandate.

TJT still has heavy lifting ahead to push though regulatory changes that will legalize household graywater systems. Channels to dialogue with the Water District are open. Our progressive and very active Water Team and Permaculture Design Team set the achievement bar high for water use standards.

Adding to our careful use of diminishing water resources, we must also consider summers that are warmer than ever before, wildlife driven into our gardens, starved by declining habitat and howling 50mph (80kph) winds several times per year.

Before “climate change” we used to see the occasional day above 109F° (43C°) Now we spend most of July and August there. Humidity can drop to single digits. We liberally drape 80% shade cloth over porches and gardens.

Longer, hotter summers and the politics of water in the desert fuel much of the fiery enthusiasm that is Transition Joshua Tree. We can see how to make this work. We’ve earned our designation as TransitionUS’ 96th Transition Town. 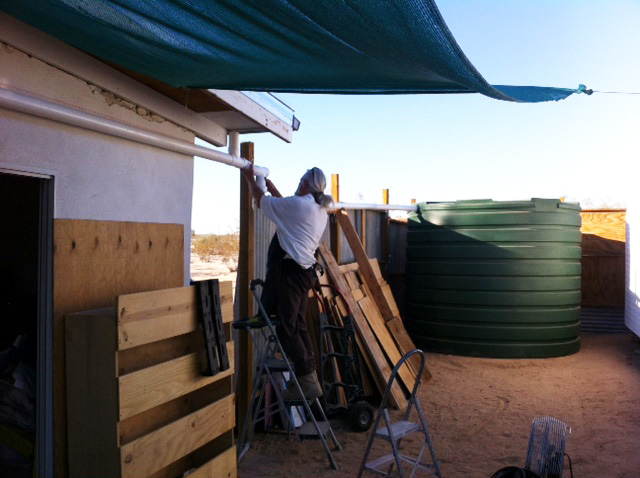