If you put on films for your initiative, you are likely to be interested in social issue film distributor Dogwoof’s new ‘Ambassador’ programme. 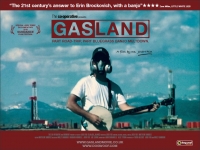 It supports community film showings by making new titles available earlier and offering marketing and ticketing support, which gets more bums on seats, raises more awareness, sells more movies, and generally is a good thing. Films for this programme this year include Son of Babylon, Gasland, Countdown to Zero and others.

Have a look at the Ambassador website for more information if you’re interested. Dogwoof are a good bunch. Here’s the outline from Dogwoof:

Transition Towns have collaborated often with Dogwoof, the film distributor of social issue films and documentaries. They often participate in Q&As at our screenings across the country, most recently for London’s screening of Oscar-nominated Gasland, for which Duncan Law of Transition Town Brixton moderated the Director’s Q&A.

Most impressive is the effort Transition Towns put into their screenings of our films to raise awareness and make a social impact in their community. We receive many letters detailing their screenings and the difference they hope they have made.

Because we recognise the importance for community’s screening in getting our films “out there” and raising as much awareness as possible, we have launched the Ambassadors Programme which allows individuals around the country to premier our films in their region. This means they get to screen new films when the buzz is at its greatest rather than months down the line – giving their screenings much more gravitas and the Ambassadors far more notoriety.

The set-up allows for approved Ambassadors to create their events on our website, where they will also have access to marketing materials and Dogwoof support. Ticket Sales take place via the website also using our advanced ticket sales which automatically generates a guest list and takes into consideration the venue’s capacity and the Ambassador’s decided ticket price.

Their screening will be listed across Dogwoof’s online community pages as well as the film’s official website. All promotion for the film’s general release directs the public to this website so much more awareness is generated for Ambassador screenings. Which means more bums on seats!

We’re looking for Ambassadors who have a passion for the issues related in our films and are also innovative in their approach to community events. Ambassadors tend to use alternative venues for the screenings such as football clubs, pubs or even an antique shop!

We have some excellent Ambassador titles up for screening including Lucy Walker’s Countdown to Zero – a high profile documentary discussing nuclear disarmament from a rising star documentarian. There are some exciting plans for the film’s premiere including a Q&A with the Queen of Jordan and Tarantino producer, Lawrence bender. The Q&A will be available to Amabssadors via a live link up. All that is required is an internet connection!

You can find out more on the Ambassadors website and also see the available films. We are in the process of improving the website to make it more dynamic for new and existing Ambassadors and easier to navigate through but I thought it worthwhile to make transition aware of the programme as soon as possible.