Marina O’Connell is a fruit grower, a Transition and permaculture trainer, and the designer of a new course offered through Transition Training, called Resilient Food Systems which will be run for the first time Friday 13th to Saturday 14th September at Organic Lea in Walthamstow in London.  I met with Marina in late July, and asked her where the idea of the course came from (you can either listen to/download the podcast, or read the transcript below).

There’s a huge amount of really exciting farms, and selling ideas that I think are really quite radical, springing up all over the place, so it seemed a really interesting way to show showcase those, at the same time as offering the people an opportunity to think about how they could start their own systems up. 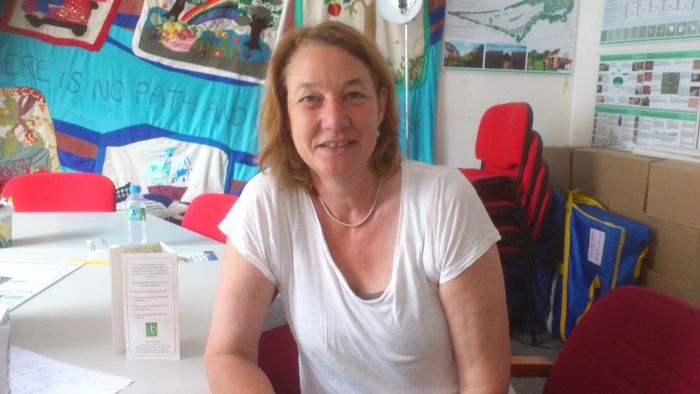 When people come on the course in September, what will you cover?

On the first day, we’re going to focus on food production and growing systems. In the morning we’re going to really try and analyse what the issues are that food production is facing in the next 20-30 years. Then we’re actually going to go and look at a farm and we’re going to hopefully run the course on lots of different kinds of farms. We’re starting off on an urban farm, 12 acres of organic permaculture growing in London which is extraordinary. We’re also going to run courses on larger rural farms, arable farms and livestock farms.

In the afternoon we are actually going to create a map on the floor of a farm: a new resilient farm and the characteristics it might have, bearing in mind the issues that we know are facing food production in the next 20-30 years. The whole group is going to work on that and we’ll hopefully come up with a set of characteristics that these farms have so that they can cope with the problems that are heading our way.

What do you hope that people will leave the course with? What will they get out of it?

I hope that people leave the course with a sense of optimism. A clear sense of the issues that their farm is going to have to be coping with, a sense of direction.  Signposting is a key part of the course, as to where they would need to go next and pick up the next bit of information they need. Networks, plugging them into networks so they start to feel other people out there doing the same things as them and where to go and look at other places. This is just the beginning really, the beginning of a journey.

The idea of organic farming, sustainable agriculture, permaculture and other forms of sustainable food production have been out there for a while.  What does the concept of resilience add into how we think about food systems that maybe wasn’t there in the previous approaches?

With organic, biodynamic and permaculture methods, I would class all of those as different aspects of resilience because of their low carbon footprint. But many organic farms in particular don’t – a lot of them do, but not all – re-localise their food supply. The idea with the resilient system is that you can pick and choose bits from all of those different methods to find your own to suit yourself. In fact, it wouldn’t even need to be registered organic or permaculture or biodynamic, but we can pick and choose bits of those methods that our out there and established and create systems that work for ourselves.

How vital, in terms of Transition working properly, how vital is it that we really get the food systems part of it sorted out?

I think it’s key, because we all need to eat. The last 18 months has been a bit of a wake up call to lots of growers because the weather that we’ve had has been very detrimental to food production.  All of the farmers and growers that I know had a really disastrous year. Personally, in my farm, we produced 15% of the fruit that we normally produce, and then leading into this year, we’re about a month late.

It’s very difficult growing conditions and productivity across the board has been down. It’s been quite shocking to everybody and very difficult economically to survive that. I think a lot of us have managed because we’re talking to our customers on a weekly basis so they begin to understand those sorts of problems.

The National Farmers Union were on the news this morning saying that because of the weather, farmers needed more support, which presumably meant more subsidy and support in that kind of a way. There wasn’t any talk of re-thinking what farming does or of re-thinking farming’s contribution in terms of carbon emissions, which I thought was really interesting in terms of that being the response, whereas it seems that what you’re talking about is very pro-actively responding to this in terms of changing the practices that underpin agriculture.

There’s a practical food production method in that you need to spread your risk, so farmers and growers are trialling new varieties and spreading the season a lot more and experimenting a lot more to cover these bizarre weather conditions. One of the case studies that I interviewed last week, Joanne at a low-carbon farm in Ipswich, told me that her customers pay £10 a week for their vegetables. Last year she actually didn’t supply them with any vegetables for about 4 weeks but they still had to pay and she explained that to them. It’s very much about passing that information on to the consumer so that they understand and they’re part of that risk as well.

It means that there is still food to eat, but it’s not the food that we’ve become accustomed to eating all year round. It’s getting a bit thin on the ground for vegetables in the hungry gap. I think also for the farmer, the food producer, the stress of carrying that, if the consumer is more aware of it and happy to pay a little bit of extra money or even pay for nothing to support the farmer then that helps a lot. Not just financially but also psychologically. It’s very stressful if your crops are a month late and you’ve got no income.

The first running of the course is in September but you’re hoping that it will be run on a regular basis in different locations around the country?

That would be my aim, to run in in different parts of the country with different emphases, depending on what farm we decided to run it on.

You can read more about the course, and how to book a place, here.