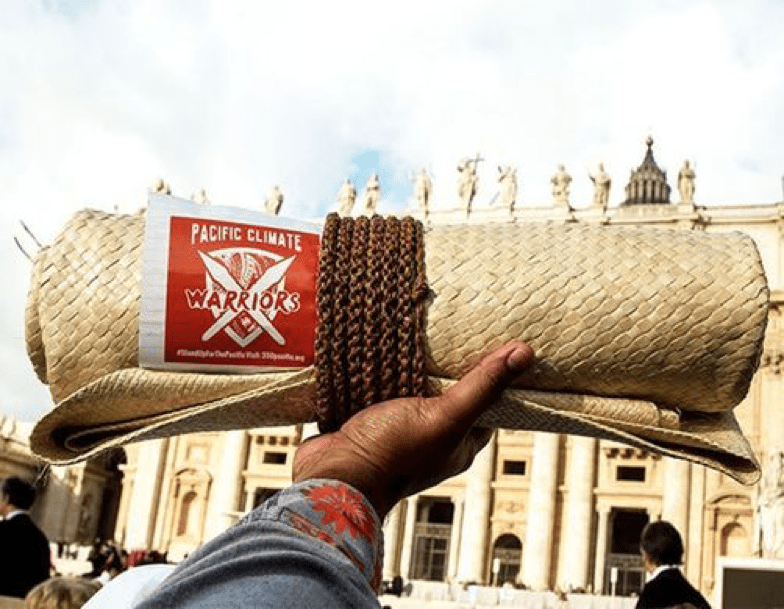 Kevin Buckland, our final Guest Editor, brings us his 3rd instalment, this time in the Pacific.

In October of 2015, two months before the COP21 climate talks in Paris. A group of “Pacific Climate Warriors” from small, low-lying Pacific islands – some of the most climate-impacted places in the world- journeyed halfway around the world to the Vatican in Rome. Two years earlier, the Pacific Climate Warriors had gained worldwide recognition for their “Canoes Vs. Coal” Action, where traditional handmade canoes blockaded the worlds largest coal-port. Now, they had come to Rome to do something very different. During their 3 day vigil in Saint Peters Square, members of the Pacific Climate Warriors prayed together for their climate leaders and traditionally mourned what they are losing to climate change.

As they prayed, they sat barefoot upon hand-woven traditional reed mats that, despite their geographic distance, are common throughout all of the Pacific Islands. The weaving of these traditional mats had been used by the Pacific Climate Warriors as an organizing tool to create a space to talk about the trauma of climate change on their islands. The mats they prayed upon were interwoven with the stories that were told during their making.

The prayer vigil at the Vatican was facilitated by Koreti Tiumalu, a Samoan climate organizer with 350.org, who passed away suddenly on July 2nd, 2017. Two years after the journey to the Vatican, I sat down with the projects co-organizer, Fenton Lutunatabua, to reflect upon the experience of this project, the decolonization of activism, and what Koreti left behind in her passing.

K: Hello Fenton. First of all, could you say a little about yourself and how you first felt like you connected with the reality of climate change and what it means beyond the science?

F: I remember this particular day, years ago, I would have been 7 or 8. I remember my grandfather took me out fishing one day, and to pass the time my Pa would tell me stories about our old people, and I remember on this particular day he told me that we come from a long line of boat builders and fisherman and that the ocean would always be kind to us. That story always stuck in my head: that the ocean would always be kind to us. Then when I started learning about climate change, I realize that the very same thing that had nourished my family for generations would now destroy us. That’s when I thought we need to do something about this and I need to get involved in the climate movement.

A traditionally woven mat that was brought to the Vatican and gifted to the Pope. http://asiapacificreport.nz/2016/02/17/climate-warrior-its-scary-youve-seen-what-they-do-to-activists/

F:  Just to preface as well that this narrative change wasn’t something the pacific climate warriors pushed for, it was actually an existing movement of Pacific Islanders and our elders who were really angry with how the development world framed pacific islanders. And so we learned from the elders… and so many of the elders in our movement had already begun having those conversations about why its so important that pacific islanders tell their own stories – so we just contextualized that to climate change. At the time, the stories that were told about Pacific Islanders in the climate discourse was that we were looking for handouts, ya know, the whole victim narrative.

The way the warriors are telling their stories – they will acknowledge the climate impacts but they will always acknowledge the resilience of their communities. Saying “that’s not the only story about us” we are also warriors standing up for our home and our people. And I think Koreti really encouraged people to do that.

Talking about trauma is difficult. One of the things we do quite intentionally with the warriors is to encourage them to share their stories about what compels them to do this work. So if you are going to go out to communities, wanting to talk about their trauma – model that for them, show them how you are dealing with your trauma of climate impacts, but how you are also persevering in the face of that trauma. So its about reframing vulnerability as a strength. Its not easy to do, for sure, but they understand that if people don’t connect or understand why you are doing this, it won’t work.

I remember when we were sat out on those mats and we were going from matt to matt to pray for our people and the Pacific climate leaders. It was intense, man. There were tears, but not sobbing-tears, coming from a deep place of pain and hurt – but also hope. When they were mourning we were like: “we will acknowledge and see everything that is happening – but not be defined by it.”