By Deborah Rim Moiso: Sometime in April 2016, an article in Spanish appeared on the Transition Network’s blog, recounting Juan del Rio’s adventures touring South American initiatives and promoting his book. Today I’d like to ask: how did that feel, all those foreign words on a familiar website? For those who understand Spanish, for those who don’t. For those who, like me, sort-of-do. Was it strange? Alienating? Something to celebrate? Did the pictures make you feel at home? Do different languages create a distance, or a bridge?

Juan opened his article with one of my favorite quotes, from Machado: “Caminante no hay camino, se hace camino al andar”. Which, in English, is usually translated as “Traveller there is no path, the path is made by walking”. I’d open with the same quote to share the story of how the “Transitionese” project is taking shape, step by step.

Transitionese is the name we’ve given to a project aiming to expand the International Transition movement’s translation capacities and, therefore, to highlight and support its linguistic diversity. Me, Sara and Pedro kicked off the project, and introduced ourselves, with this announcement in March 2016. As the project progresses from an initial “Dreaming” to a “Planning” stage, we’re starting to see the landscape rise at the horizon, and beginning to sense what the rest of the road might look like.

In the first month, we’ve been collecting ideas and needs from people throughout the movement. The ideas that have been shared have helped us distill the Dream of the Transition Network’s translation expansion into concrete features to be developed throughout the next phases of the project. We used the network’s outreach capacity to invite people to participate in an online survey, where we collected dreams from 8 countries (Chile, Germany, Italy, the Netherlands, Portugal, Spain, the United Kingdom, and the United States of America… that covers at least nine “Transitionese” languages!).

Sometimes it can feel like projects like this work completely upside-down. Instead of having “experts” sail into port with “solutions”, someone walks into the local pub, takes a seat, and proceeds to do (apparently) nothing for the next month but talk to the locals. A chat becomes a sketch on a paper napkin. Becomes a blueprint. Becomes a ship. Working in collaborative projects we see it happening over and over again: something emerges, surprising and unexpected.  What happens when we share our dreams?

Among the output you can expect from Transitionese in the coming months, there will be a repository of translated content, which we envision as an engaging mosaic, easy to interact with and navigate, opening onto the many languages of Transition. 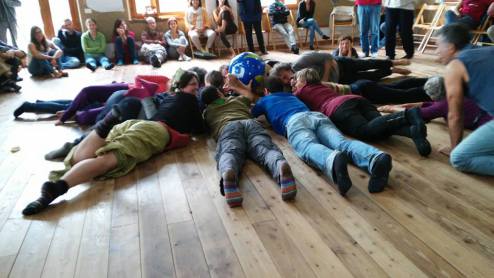 One of the people responding to survey wrote: “The project can become a gateway for people curious to get first access to the world of Transition, so it should feel very open and accessible, like an entry door. Documents and information can be a real support for local initiatives not to feel isolated”.

Relationships and human collaboration will be a core feature of the central registry, a tool enabling transitioners to cooperate in selecting, translating, and publishing  multi-lingual content. Words we collected as part of this dream are feedback, impact, empathy, collaboration. We were constantly reminded of what feeds motivation to collaborate into what are, in most part, volunteer projects: care for the humanity in our work, a feeling of being enriched and energised, rather than depleted and burnt-out, by lending a hand. And, also, feedback and channels through which gratitude and appreciation can flow.

One of the things we encountered while gathering information for the Transitionese project was the staggering amount of material already translated by transitioners far and wide, and sometimes organised in a beautiful and accessible fashion. We met Marco Matera, an Italian journalist based in Reading who has created this:, providing much material for reflection, and have also been inspired by many other projects bringing people together across languages, such as the team at Global Voices. Do you know of any projects with translated content we should be aware of? Please let us know, we have a special email box: transitionese@gmail.com.