Embedding in place and embedding in community are two of the strands of work for the Schools in Transition programme. The third is taking action outside the walls of the school to do some real-world problem-solving. Earlier this year, as part of the watershed work that KEVICC, the Totnes secondary school, is currently doing on the River Dart, six local primaries were invited in to do story-telling and art workshops, getting to know the local river in creative ways. I asked story-teller and artist Helen Sands, who led the workshops, how she experienced the “Mythic Dart” days with young children. This blog is written by her, and we hope it will inspire you to do similar work around your own river:

How do you get to know a river? The best way is probably to walk beside it, or to sail on it, or swim in it. Another way is to hear stories about it, to hear them told live by a storyteller who’s right there in the room with you. That’s what I did at the beginning of this year with primary schoolchildren from the Totnes Area. I was invited by our local secondary school KEVICC to work with six of their local primary feeder schools. Children and their teachers came to KEVICC over four Mondays, and spent the whole day, sharing their experience of the River Dart, hearing a key mythic story, and then retelling the story by creating fantastic artwork. 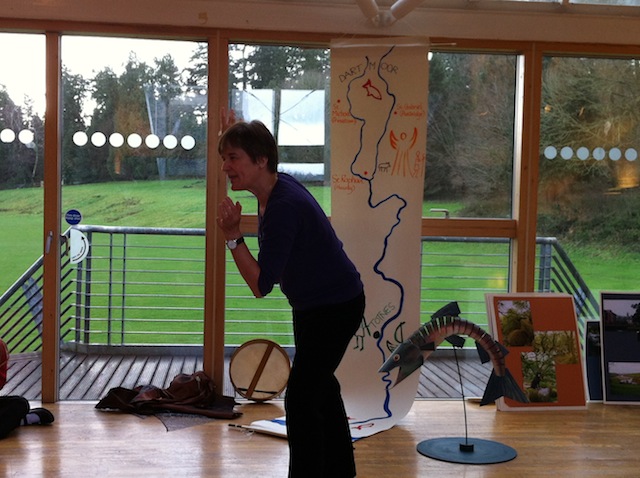 The Ariel Centre Gallery has wonderful big windows and light and is a part of KEVICC. I started by gathering the children’s experiences of the Dart— there were stories of walking by it at Longmarsh, having birthday picnics beside it, swimming, kayaking, seeing seals, eels and swans, and catching fish. Others talked of streams at the foot of their garden, flooding, sewage! Then we talked about the source of the Dart, high Dartmoor, and the children really knew the feel of it, describing it as ‘relaxing’, ’desolate’, ‘lonely’, ‘windy’ ‘open wide’. Some remembered discovering sheep’s skulls up there.

We looked at pictures of the Dart from moor to mouth. They got a sense of how it changes from a small stream you could jump across, to a mighty ship-bearing river. We did a lot of embodied learning – like when a volunteer tipped a bottle of water from the flat to tilted, the children saw the river’s flow from high to low ground demonstrated. I wanted them to discover through observation the strange fact that the river Dart has two sources, East and West. So I had great fun making a Dart floor-length robe (a bit like a ball gown) of brown satin with appliqued silver salmon and two brown arm extensions. When I held up my arms, the children got the point! They also had a chance to try it on themselves later.

Then I told a mythic story. The children from St. John’s Primary School, were sitting on the floor, and I was standing up, but more and more found myself crouching down to bring them the story at their level. I could see their eyes, and they were indeed giving me their complete attention.

The first story was ‘Tobias and the Angel’ which tells of a young man who has to make a difficult journey and survives various perils through the guidance of the Archangel Raphael. Why this story you may ask? What has it got to do with the River Dart? Well, the story is written in the landscape as up on Dartmoor near the sources of the Dart there is a unique configuration of three archangel churches: St. Michael in Princetown, St. Raphael in Huccaby, and St. Gabriel in Postbridge. To my eyes, they seem to pour their inspiration downriver. So telling the story of Tobias and his contact with Raphael opens up this aspect of the river and its healing qualities.

It took a long time to tell, and I know that I would cut some parts in future, but the children stayed with it. One said: ‘The bit I liked best was the splendid story.’

Then I introduced the art task, which was inspired by the light that streams into the Gallery.

The children made ‘stained glass’ effect panels of tissue paper glued onto transparent laminate, showing the three archangels and scenes from the story. They were working on the floor drawing large-scale pictures (much larger than they were used to drawing at school), using pictures of medieval stained glass and icons as resource material. They raced to get them finished, and then saw the beautiful results against the light, one of them commenting: ‘I liked it best when I put my picture in front of the window’.

The second story (told to children from Berry Pomeroy and Stoke Gabriel Primary Schools) was the story of Brutus, Legendary First King of Britain.  Brutus is said to have founded Totnes within the tidal reach of the River Dart after a long journey through the Mediterranean. The stone he supposedly stood on when he disembarked can still be found half-way up Totnes High Street. It’s a heroic story, with battles, accidents, guidance from a goddess, and best of all, a murderous giant called Gog-ma-gog who is intent on destroying Brutus’ settlement of Totnes. The children’s involvement with this bit of the story showed in their dramatic and colourful pictures. The fight between Corineus and Gog-ma-Gog gave the idea for the artwork: we wanted to use the idea of ‘resist’, so the children drew with brightly coloured wax crayons onto crumpled round paper plates and then finished with a watercolour ‘resist’ wash.

I heard one say: ‘… it was really fun and enjoyable, learning new ways to explore creativity and art. It was also fun because of the textures on the paper plates.’ At the end of the day, each child stood up holding their plate and saying one sentence to describe it. I was stunned by their descriptive language: ‘The river Dart was shining with fishes and branches’. ‘Brutus wanted to have a miracle for his people and friends’.

I told the third stories to children from The Grove and Marldon Primary Schools, and the subject was the salmon fish and its archetypal journey: born in the high Dart, swimming into the ocean to mature, and then returning to the Dart to spawn. We had great fun with the Irish story “The Salmon and the Well of Wisdom’ and the Welsh story ‘Ceridwen and Gwion’. Both tell of great wisdom imparted through thumb-sucking (we all had a go!) and the Welsh story has a terrific chase scene with shape-shifting animals. 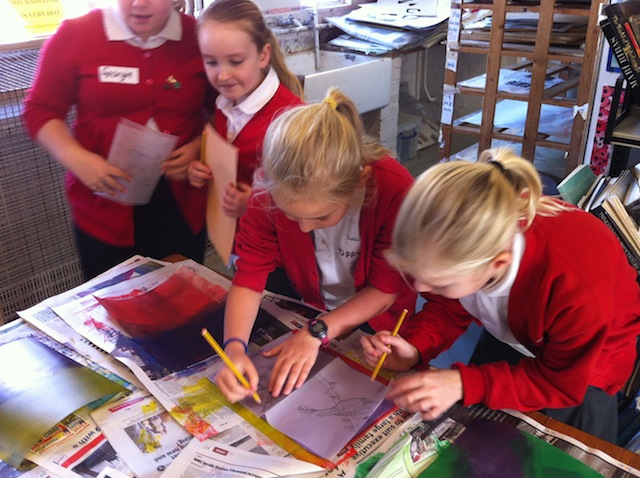 Alethea Koos, the artist-in-residence at KEVICC, guided the children to make colourful mono-prints of the animals in chase, and also of the salmon’s different names as it passes through its’ life-cycle. The names are so unusual—’alevin’, ‘parr’, ‘grilse’—I thought the only way to learn them would be to trace the different sized fish on the palms of our hands while saying the names. We ended up with a full size salmon in the space between our two palms. I loved this embodied way of learning. The children loved the print-making (even when one girl got covered in blue paint when a tube burst). There was a request for: ‘more prints and more stories.’ ‘I loved (and I mean loved) the art’.  Appreciation came from a teacher: ‘I thought the story-telling was brilliant. Thoroughly captivating and a great introduction to the task.’

I really enjoyed telling the stories, and the seeing how the children, fired by the words, translate it into striking images. All their work will be on show in an exhibition at the Ariel Centre (KEVICC, Totnes) in October this year. It will be alongside work from KEVICC’s and Transition Education’s joint ‘Watershed’ project. Come along and see how they have got to know the Dart. And how they love it. I just want to add that the success of the workshops was due to the fantastic supportive teamwork of Tim, Lucinda and Steve (KEVICC Art Department and Ariel Gallery) and Alethea (Artist in Residence).