Disclaimer: Due to lack of sleep I take no responsibility for the contents of this post!

It all feels like a bit of a whirlwind. I have learnt so much, had so many inspiring conversations and talked to so many amazing people and its only elevenses on the second day… I may need to have a couple of days of just sitting and reflecting after this. 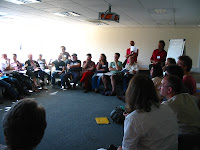 It’s an amazing experience, lots of delicious food, but it did take me two attempts to get some herbal tea. The first attempts produced coffee and the second tea, eventually I discovered that the hot water was actually in little jugs.

My first session was the outreach, partnership and diversity group, where we discussed the limits of sticking rigidly to a transition model and of expecting people to come round to your point of view and how you need to go to people where they feel comfortable, listen to their issues and points of view and help them to make the changes they want in their community. I also found out that there were lots of transition projects happening in Glasgow in the most troubled areas, that I wasn’t aware of, so that’s exciting. I think that this is such an important issue and I definitely want to explore it in more detail, so keep your eyes open for future thoughts.

Interestingly in my afternoon ‘hot topics’ session on success and failure in transition Ed offered the observation that perhaps Transition is inherently an exclusive movement in the sense that the processes and methods that it uses are only acceptable and work for certain people. But maybe that that’s not something to worry about, as nothing can work for everyone. As long as we are as open and inclusive as possible then we cannot expect everyone to join in. We are just the tip of the arrowhead, pioneering a community response, so we are inevitably only small!

So, deep and thought provoking stuff. I am not going to try and do it justice now, but just wanted to give a flavour of the discussions. Another interesting topic that arose was how do you answer the question ‘How is your initiative going?’. Responses circled around the fact that we are actually transitional, it is a process not an outcome or destination. And also that spreading the idea and the ethos is the aim, which is hard to monitor.

In the evening we had a mesmerising talk by Jay Griffiths who argued that kindness was wild and natural in the most poetic language that it was almost like visioning. This was followed by embracing our wildness to the amazing beats of moving sound and then going outside to watch the sun reflecting off the solar panels of a passing satellite. A fairy passing.