Here is a recent piece I wrote for The Guardian’s Living Better Challenge:

Putting a stop to water waste: why local initiatives are key: Cities facing drought can generate water and jobs by planting trees, and installing tanks and rainwater harvesting systems

Los Angeles imports 89% of its water. Every year it spends over $350m (£211m) disposing of the perfectly acceptable rainwater that falls upon it, water valued at between $300-400m. At the same time, it spends $785m importing the water it needs from many miles away, a process that uses the largest amount of electricity in California.

Meanwhile, here in the UK, as the climate warms the likelihood of drought is increasing. If the raised beds in my garden are anything to go by, this is turning out to be a very dry summer already. A recent Water Resources Management paper by researcher Muhammad Rahiz and Professor Mark New, looked at future drought trends and concluded that “both drought intensity and the spatial extent of droughts in the UK are projected by these climate models to increase into the future”. The South East of England is of particular concern.

Perhaps we should be looking to places where drought is a more regular fact of life, for inspiration for how to develop a more resilient relationship with water. Although LA may lack a coherent city-wide strategy for rethinking its water system, it doesn’t lack people working on solutions. Andy Lipkis has spent 20 years looking at LA in its wider context as a water catchment. California is currently suffering an historic drought, the worst for 500 years, which has brought to the fore many of the issues that TreePeople, the organisation he founded over 40 years ago, has been working on for years. With support for widespread conservation slow to emerge, and growing pressure for energy-intensive desalination plants which can cost up to $4bn a piece as the solution, Lipkis visited Australia to see what lessons could be learnt from the country’s recent 12-year drought.

Rather than the linear thinking that underpins LA, Australian cities such as Adelaide have started to think of themselves more as forest ecosystems. When rain falls on a forest, the impact of its fall is broken by the trees. An oak tree with a 100ft canopy can hold more than 57,000 gallons of water just in its rootmat, like a sponge, and more in its leaves which act almost as a floating lake. Flooding downhill is reduced, water is filtered and aquifers are replenished. Could our cities shift their relationship with rainwater in this direction? Rather than seeing rainfall as a problem, might each downpour be the opportunity to capture and store as much of it as possible?

This was the approach taken in Australia. People were incentivised toharvest and store rainwater, with tanks and cisterns being heavily discounted. As a result, 45% of homes in Adelaide now have rainwater harvesting. In Brisbane, average water use fell from 80 gallons per person per day to 33. In Sydney, the installation of water cisterns is one of the sustainability changes required in order to get planning consent for changes to existing buildings. 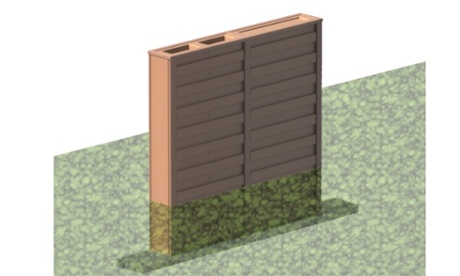 Back in LA, Lipkis tells me: “Essentially the model we’re intending to overlay onto the city is a model of how a forest ecosystem works, within which all energy, all water, all nutrients are recycled.” It’s an approach which, he argues, could create 50,000 new jobs. TreePeople are busy working towards a target of LA generating 50% of its own water (today it’s 11%) through unpaving neighbourhoods, planting trees, installing tanks and rainwater harvesting systems.

So where do the garden fences come in? One of the strategies TreePeople is promoting is the ‘cistern fence’, replacing garden fences with long thin water tanks. 100 feet of cistern fence could hold 5,000 gallons of water. While not yet available, Lipkis proposes that these tanks be made in the city using locally recycled plastic. “The key innovation I’m promoting is to have the tanks electronically networked with remote control technology so you can have a fully decentralised system, but manage it very nimbly as a huge networked reservoir – making it functional for water supply, flood protection and stormwater quality protection. The technology now exists to network one million tanks as a single system,” he tells me.

Lipkis believes that great things are possible. Indeed, as he puts it, “A new, resilient, local water supply is not only possible, it’s beginning to happen.” Cistern fences as standard in all new-build housing developments in the UK? It may not be as far away as you might think. I’ll drink to that.