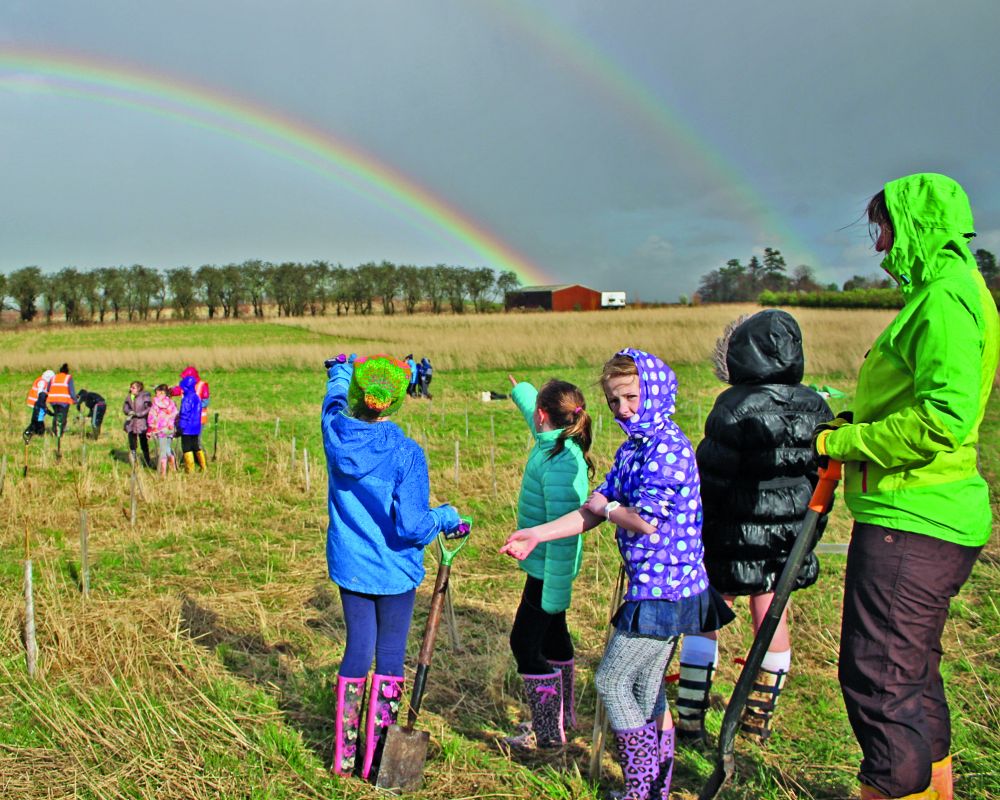 Graham Truscott tells the story of how Melbourne Area Transition bought a redundant cabbage field and turned it back into biodiverse, fruitful, community-owned land.

With the opening of a beautiful new hub building in October 2018, 4 hectares (10 acres) of former cabbage field (last held in common ownership in 1791) celebrated the fifth anniversary of its return to cooperative ownership and a significant transformation. The ‘big idea’ in March 2013 had been to turn this rather ordinary field into a multipurpose resource for the local community, an educational showcase and exemplar for permaculture principles and a fighting (albeit local and small-scale) response to the multiple threats affecting the biosphere. We were then a small Transition group in a rural/subur­ban area of South Derbyshire. 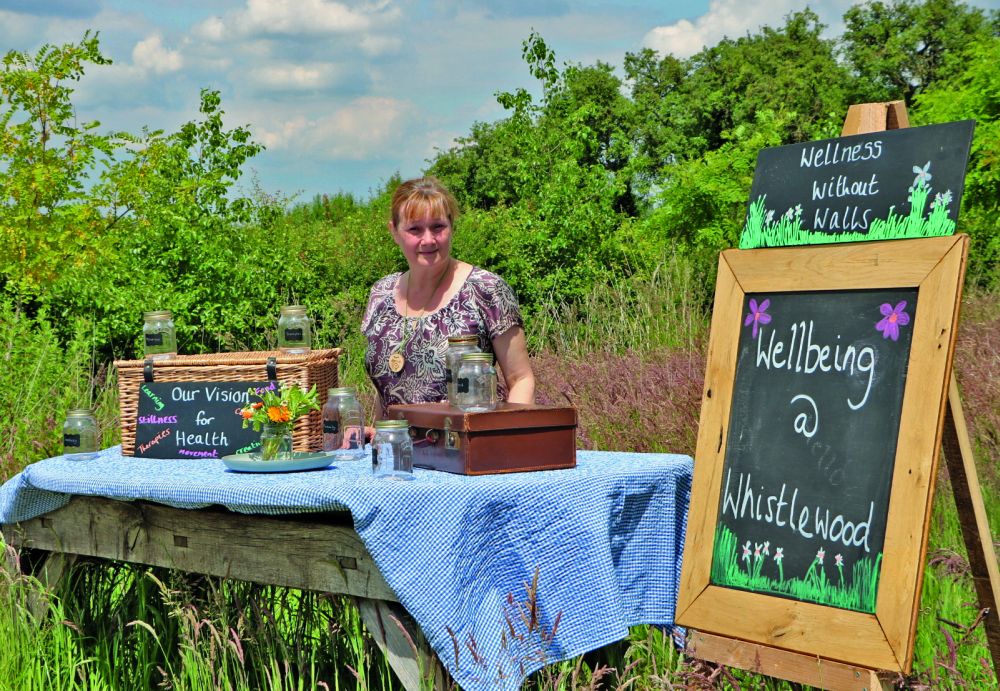 Melbourne Area Transition members had achieved a few small practical successes. A thriving forest garden had been created at the local school, a 10kW solar PV system placed on the roof of the grade 1 listed parish church and a number of other projects and activities drew attention to the big issues … But raising the money, fighting off housing developers, equestrian and other local property interests, managing land as an inexperienced group? That’s how daunting it looked when the commercial ‘For Sale’ signs appeared by the side of the road. By October 2013, however, not only had we figured out how to do it, got ourselves and our new cooperative approved by the Financial Regulator, gathered more than 150 members, done all the legal stuff etc. – and raised the cash – we were holding our first celebration on our own land.

The unequivocal support of The National Forest was critical. Within three days of hearing of our hopes, the promise of a capital grant from this forward-thinking organisation to start the fundraising forced us to turn thoughts into action. What a pleasure then, recently, to host The National Forest staff for a teambuilding away day in our newly completed community centre! The Design People could not be expected to become landowners without knowing what was intended for the site, but the risk that someone else would come forward with a higher bid was ever present.

This urgency allowed no time to Observe and Interact with the landscape before creating the design and promoting the project. Yet that design, conceived in haste, has stood us well these past six years. On the principle of Working from Patterns to Details, initial plans identified the locations and purposes of major elements but did not necessarily explain how those elements would be executed over time. Several elements on the original plan have still not been designed in detail, let alone built, including the community garden which we expected to be an early ‘win’!

Others, like the load-bearing straw-bale roundhouse, our most iconic, beautiful and expensive structure, have received the considerable detailed design work necessary to bring them to fruition. The design brief called for Multiple Yields, of course, so orchard and forest garden areas were planned as well as nut trees, willow and hazel coppice, ponds, swales and open areas with opportunities to create all-important edges between them, but the conventional potential yields from these elements were far from the extent of our ambition. Education, fun, enterprise and biodiversity were identified as at least equally important, so the business plan proposed activities that could deliver these benefits too. 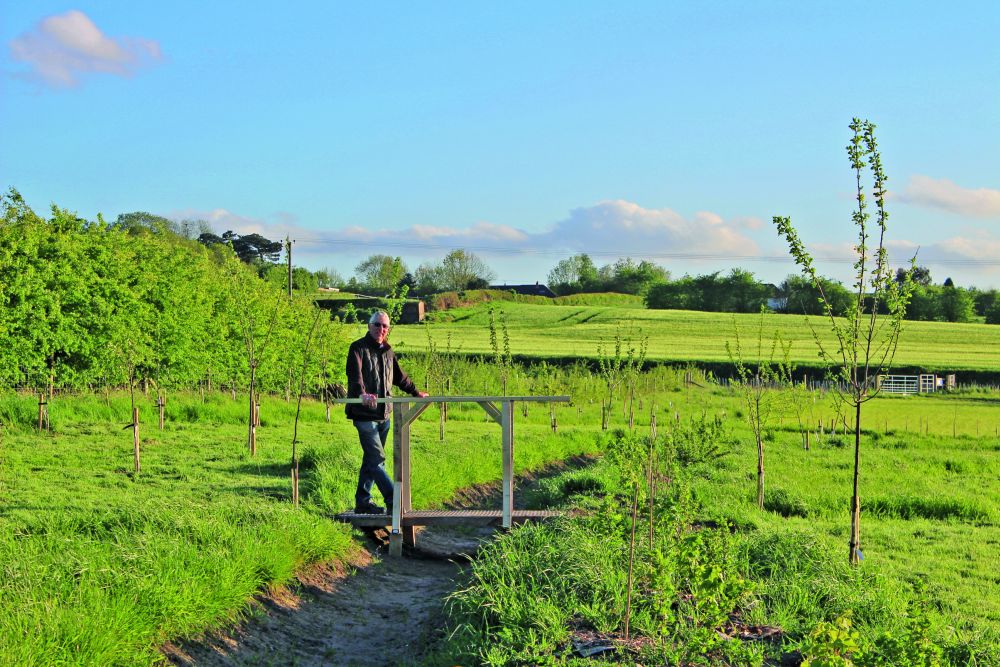 We aimed to launch spin-off businesses using our site resources and become financially self-sustaining, as well as environmentally sustainable, at the earliest opportunity. We noted our neighbours’ land: on one side a National Forest planting 10-12 years ahead of ours with a beautiful avenue of over-mature pear trees, and on the other an intensive monoculture wheat field, regularly sprayed with who-knows-what chemicals. Another field, bordering the lower edge of our site, including and sharing the same access track, was purchased by people intending to keep horses. Our design included a core area, delineated by hedge.

The intention was that this part of the (then) field could be ‘closed’ for events, while still permitting full public access everywhere else. We sought and received planning per­mis­sion for everything that we could ever imagine wanting to have at Whistlewood. To the surprise of local authority planners, we wanted a design as climate-crisis proof as pos­sible: we may have been the first development application they had ever seen that wanted to retain water on site.

Having negotiated a slightly lower purchase price than expected, we bought ourselves a yurt with the money saved. In November 2013, this provided a sheltered space for our first celebration on the land that was now ours. Waking up in the yurt, as three adults and several children did the following day, was magical. Opening the yurt doors, we were treated to a sparrow hawk sweeping the field less than 20 metres away. The first of many wonderful wildlife experiences here. We soon encountered and fell in love with the Whistle­wood hares.

Later our friends at Derbyshire Wildlife Trust conducted small mammal surveys which explained why so many raptors and owls frequent the site, including the first harvest mouse to be found (in an official survey) in Derby­shire for more than 10 years. Arthropod studies revealed gorgeous insects and introduced numerous excited children to the joys of moths and butterflies. 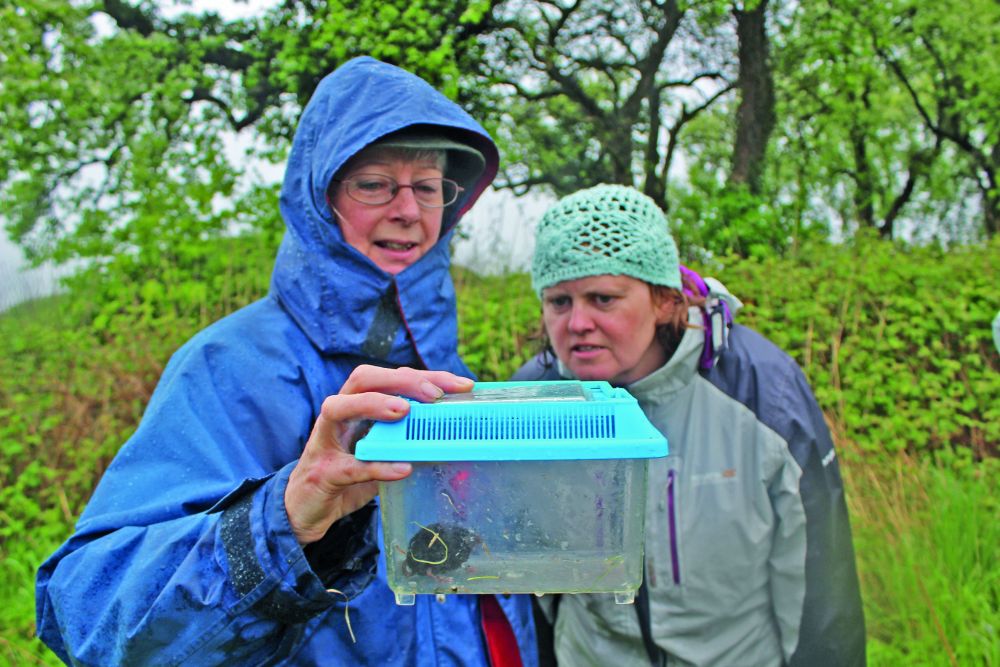 Accepting Feedback: information from these surveys has been built into the details of our design, which also has a temporal dimen­sion: there is now, for example, a defined grass-cutting regime over the course of the year to give maximum benefit to the flora and fauna that we are particularly trying to encourage. Our first (semi) permanent structure to be built was a com­posting treebog. This was swiftly followed by the back of an old British Telecom van, previously a hen-house belonging to a local farmer, bought for use as a tool store and saving the effort of having to transport tools to the site each time anything needed doing.

In addition to the trees, many of us, by now calling ourselves Whistlewooders, were keen to see a greater variety of wildflowers. Working against us was the immense fertility of the soil. This had been prime market gardening land until club root and ridiculous supermarket demands did for monoculture brassicas. The soil is rich – ideal for trees, which began to grow furiously – but less helpful for native flower species as three equal-sized test sites proved. The most successful was the test site where the overburden was scraped away, almost to the base clay 45 x 60cm (18-24in) down. It was here that we also trialled Yellow Rattle as a possible antidote to the ubiquitous grasses.

The grasses though, can also be a joy. One of the most delightfully unexpected yields was and is the pleasure that young children gain from running, hiding and playing in long grass, something it seems that they cannot do anywhere else. We might have lost an occasional sapling in the process, but here truly is fun. Such sights can be an antidote to all the background off-site stuff that has to be done to deliver our mission: accounts, insurance, promotional work, organising, etc. We have recognised and acknowledged with gratitude the stress at times taken on by core team members.

For the business plan to work, year-round structures and access were essential, but first the land needed to be moulded and reshaped. A tree planting schedule the first winter (2013-14) concentrated on the site boundaries while earth was moved within the site to open up a stream bed and create the basis of a mini-amphitheatre in the hub with spoil from swales and ponds. More than 3,500 trees have now been planted over three planting seasons, occasionally in high intensity planting days when 60+ people (including children) might be helping on site. Two hundred young fruit trees in four orchards provide opportunities to hold tree-care workshops and teach new skills.

Wherever possible, members were involved in the build of our core roundhouse – from collecting and laying 9,000 empty wine bottles as insulation in the floor, to decking the stage and verandah. Crucial was a recently-retired Whistle­wood volunteer with superb project management and engineering skills who contributed labour and supervised our professional builders every day for six months. Many others also chipped in. One member designed a centrepiece for the building floor and enabled members to create their own unique, personalised tiles for it. 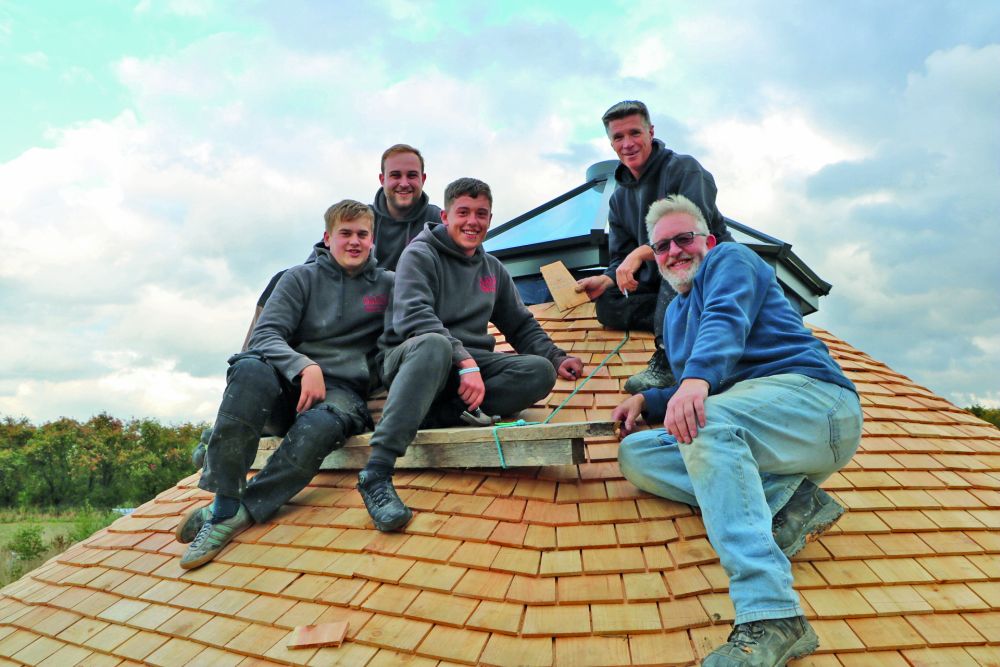 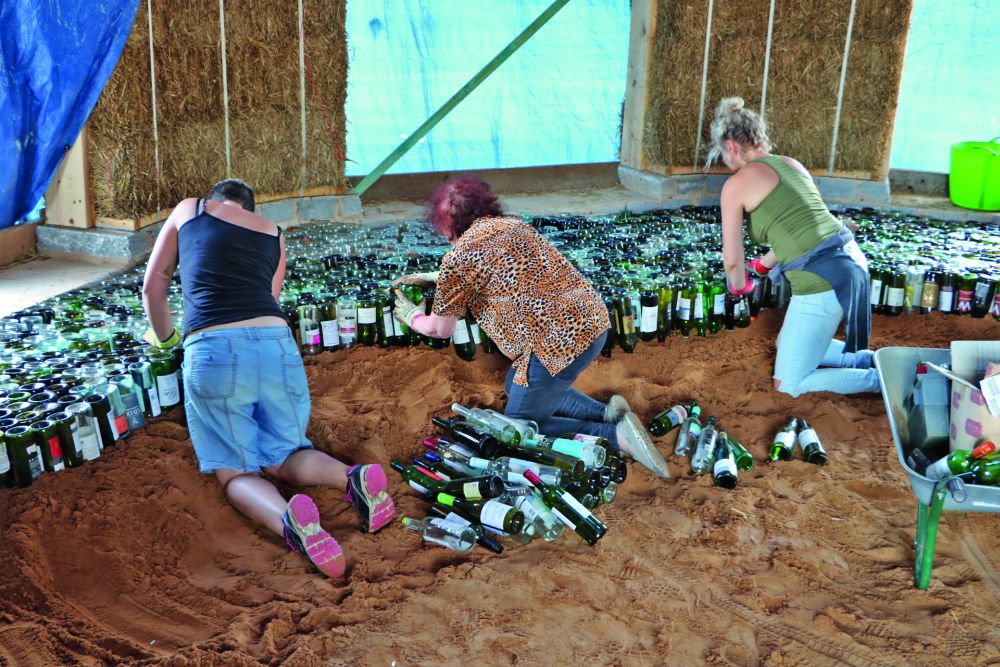 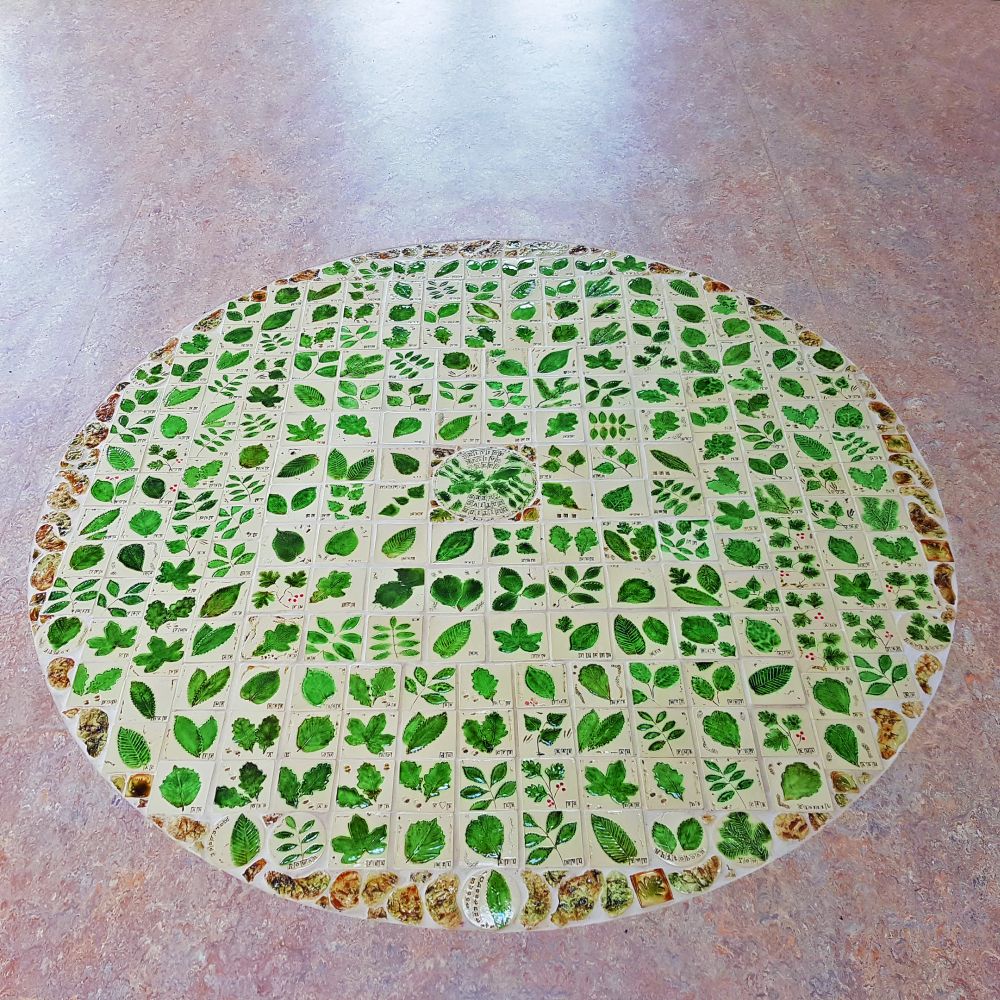 Another found us a sports equipment grant that gave us a fitness trail (not on our original design) at no cost to Whistlewood at all. Today, some 400 members strong, we are still creating elements of the site. Now that we know the place so much better it is easier to plan the details. Most importantly, however, we have created a model for community land owner­ship that helps fulfil our multi-yield mission, parti­cu­larly when it comes to learning from natural systems and demonstrating appropriate possibilities for the 21st century.