I’m just back from two days in and around the beautiful city of Bologna in Italy, participating in a series of events that felt like they generated some real traction around Transition.  Italy finds itself at an interesting moment, a fork in the road.  Its government is proposing a new bill to open the country up to fracking, to offshore oil and gas extraction, arguing that this is what will enable the nation’s dreadful economic situation to revive.  There is much opposition to this, so part of my hope for the trip was to be able to set out an alternative path, to show what Transition can offer to these discussions.

Given that Italy has no growth, and that situation is worsening, perhaps rather than opening the country up for exploitation by fracking companies and oil executives, could it be that it instead consciously becomes the world’s first post growth economy?  It is arguably better suited to do that than many other European countries, with a great solar energy resource, and is already generating a lot of renewable energy.  Its local food culture is possibly more intact than in most other European countries.  It could model the future that we will inevitably have to move to.

But Italy, as everyone reminded me everywhere I went, “is very complicated”.  Its political system is a bewildering mess, with coalition governments that change with alarming regularity, with deeply entrenched political parties happy to do anything to undermine each other, and a sense that, as Cristiano Bottone of Transition Italy told me, “whatever you want to do as a Transition group, somewhere there is a law against it”.

So people’s common experience is that making change happen is very difficult, and that the odds, and the system, are stacked against it.  Yet the spread of Transition across Italy, and the skilful way they have been building connections with people in many of the places where some of those obstacles can be removed, is a real indicator that perhaps there is another way to make things happen.

That was the background to my trip to Bologna, to try and inspire and engage people in some of the key institutions that could help to really accelerate things in Bologna, which is possibly the most progressive city in Italy, and the most likely place where such an approach might take root.

Having arrived by train, I started on Tuesday morning at the Sala Centro Fiori in the city with a meeting for students and teachers from 5 different schools from in and around Bologna.  Some were students of agriculture, but also of a range of other subjects.  There were around 300 of them, and it proved to be a fascinating session.

I spoke particularly about Transition and food, and what a new food culture might look like.  They were all very engaged, asked some great questions, and gave the idea of growing mushrooms on spent coffee grounds a round of applause!  (I imagine Bologna generates a lot more coffee grounds than Exeter, where the example I used came from …).  Here’s a video of that talk:

After the talk, lots of students gathered round wanting to know how they could start doing Transition in their school, now.  Teachers talked about the things that were already happening, and how they loved the idea of drawing it all together into the idea of a Transition School.  I was really touched by the level of enthusiasm among the young people there, very inspiring. 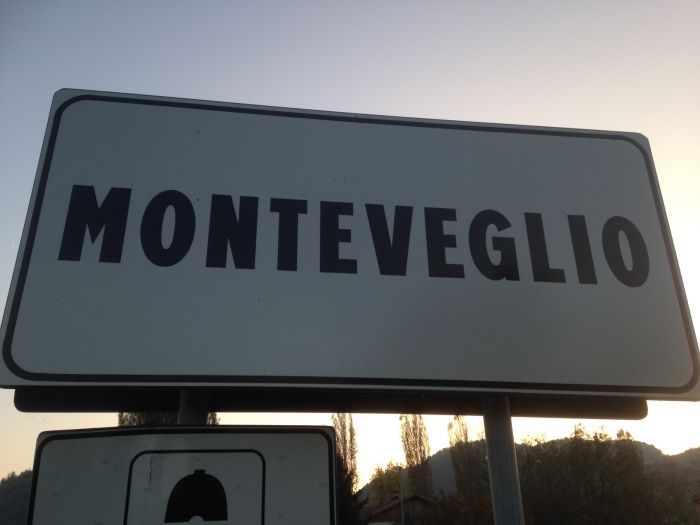 Then with Cristiano of Transition Italy, my wonderful translator Deborah and Glauco, our driver from San Lazzaro Citta’ di Transizione, we headed to the fabled Monteveglio, the birthplace of Transition in Italy.  A beautiful small town on the edge of a national park, my first impression was how fresh and delicious the air smelt there. 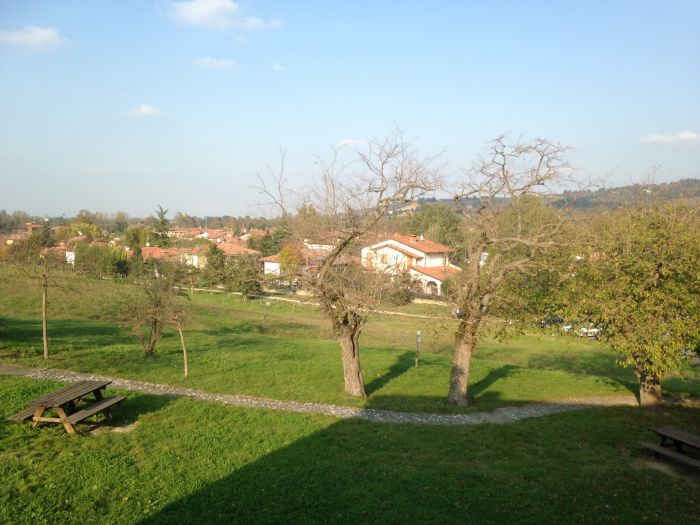 After a delicious lunch containing a delicious array of local food, and my first experience of seeing actual truffles harvested that morning from the forest, we headed to Sala Consorzio Vini, a beautiful building on the edge of town, for an informal meeting with lots of Italian Mayors and local authority officials who are, at different levels, working to integrate Transition into their work. At that meeting they all agreed to meet again and stay in touch regularly, an important step up in their working together. Then we shifted into interview mode, doing a long interview with RAI TV (Italy’s BBC) for a documentary they will be doing about Transition, as well as with Italia Che Cambia (“Italy that changes”). 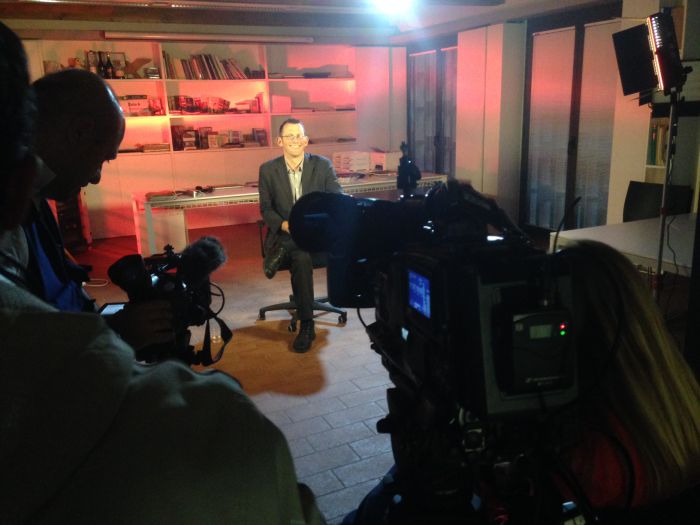 The last part of the day was, having headed back into Bologna, a Transition gathering of people doing Transition in and around the city.  It was a celebratory party, with a delicious potluck meal, great wine and local beer, meeting some wonderful people.  It also included some improvised Transition-themed theatre, music and other forms of collective silliness which were very entertaining.  By about 10, having woken up at 5 that morning having not slept well on the sleeper train, the eyelids started to droop, and it was off back to the bed and breakfast I was staying in. 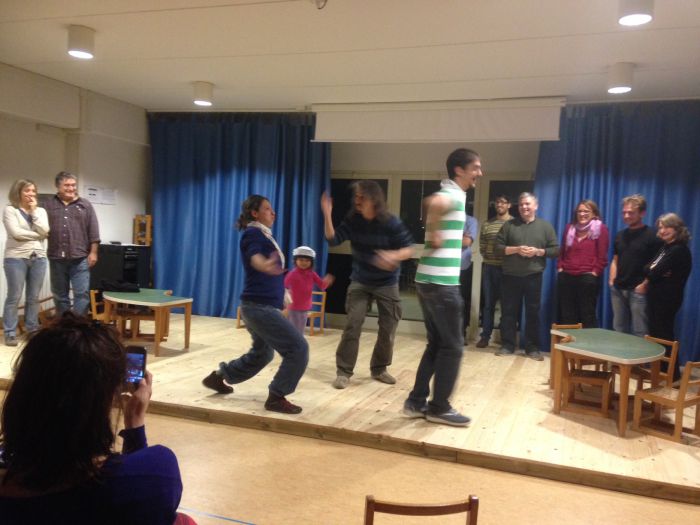 It was an amazing room to wake up in.  Right at the top of a tall house, it looked out across the city, across the rooftops, the churches, and the towers for which the city is famous.  On a beautiful clear morning it was quite a sight.  Our first event of the day was at the Sala Farnese, Bologna’s City Hall, an incredible building.  I love old buildings, and it was quite something. 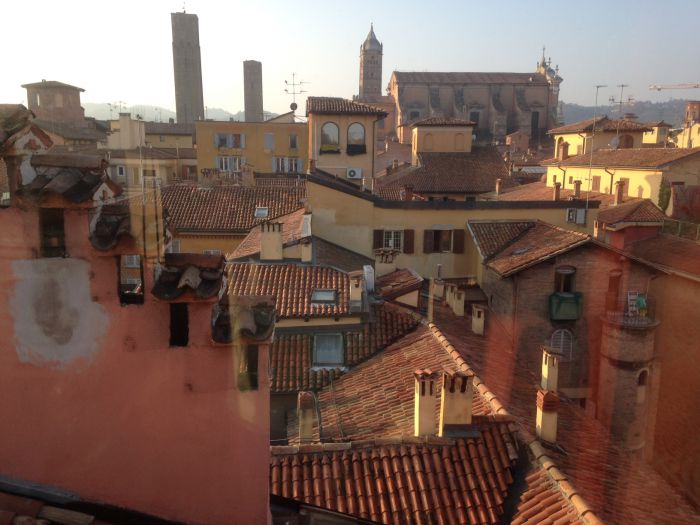 You enter up a set of wide stairs with odd stone ridges across each step which, it was explained to me, was because it was designed in medieval times so people could ride their horses up and down the stairs.  Amazing painted ceilings, ancient frescos.  The event was called ‘Verso una societa low carbon’ and was held in a beautiful room with frescos and old paintings and a very high ceiling. 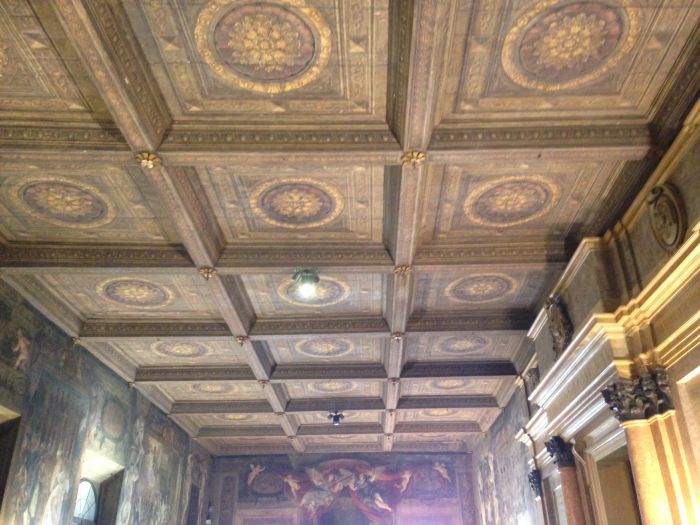 It was introduced by the Mayor of Bologna Virginio Merola, here is his talk:

Then there were some speakers from the University of Bologna who also helped to set the context: Dario Braga, Patrizia Brigidi and Alessandra Bonoli.  Here is Dario Braga:

Cristiano gave an introduction and then I spoke for about 40 minutes followed by some great questions and answers. Here is the film of that talk:

There was a great buzz in the room, felt like people were very inspired and enthused.  Met lots of people afterwards, and then once the rest of it had drawn to a close, headed off with various Transition Italy folks for pizza in Bologna’s organic and local restaurant, very fine indeed I must say.

The afternoon’s event was at the University of Bologna, the world’s oldest university.  They have recently started an ‘Alma Low Carbon’ initiative, an “integrated research team” bringing together different departments for, as they put it, “the exchange and integration of expertise of our University in the fields of the reduction of CO2 emissions and climate-changing gases”.

My talk focused on “what a Transition University might look like?”  I reflected on the university I went to, and how its campus, where were studying sustainability, featured only grass and concrete and didn’t model in any way what we were learning about.  What would it look like, I asked, if a university was a showcase, embedding at all levels, Transition approaches?

It would teach differently, engage the community differently, use its procurement differently, generate its own energy, and so on.  Some great questions and answers followed. Once it was all over, we headed off out into the early evening air, past a statue in a corridor at the University that looked just like Billy Connolly, and then to start the long journey home. 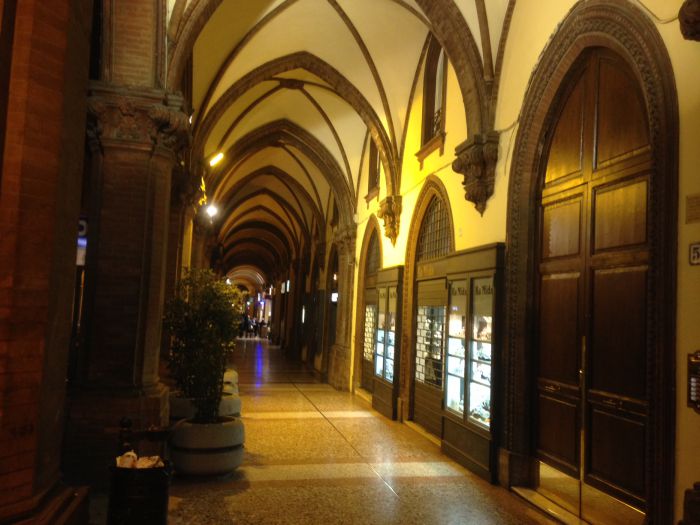 I’ll leave the last reflection to this quote from a blog posted by Italia Che Cambia on their reflections on the trip:

How to sum up this experience? A growing network of relations, interest in Transition being expressed by high-level institutions, the idea warmly welcomed by university students and high-schoolers … all these features confirm the effectiveness of the process so far, and set the scene for scaling up so that we may see the work of so many “agents of change” in Italy evolve into a coherent system. Having said that, what we are left with today is the heartening and envigorating feeling of having found in Rob Hopkins an optimistic, friendly and humble person whose visit made felt, beyond the importance of all the research and projects showcased, the true essence of Transition.

My thanks to everyone who came, who organised it, to Deborah the Transition Translator, to Glauco for driving, to Cristiano for all his organising work, to my host, to all the wonderful Transition folks I met for all the great work they are doing, to the University for the invitation.