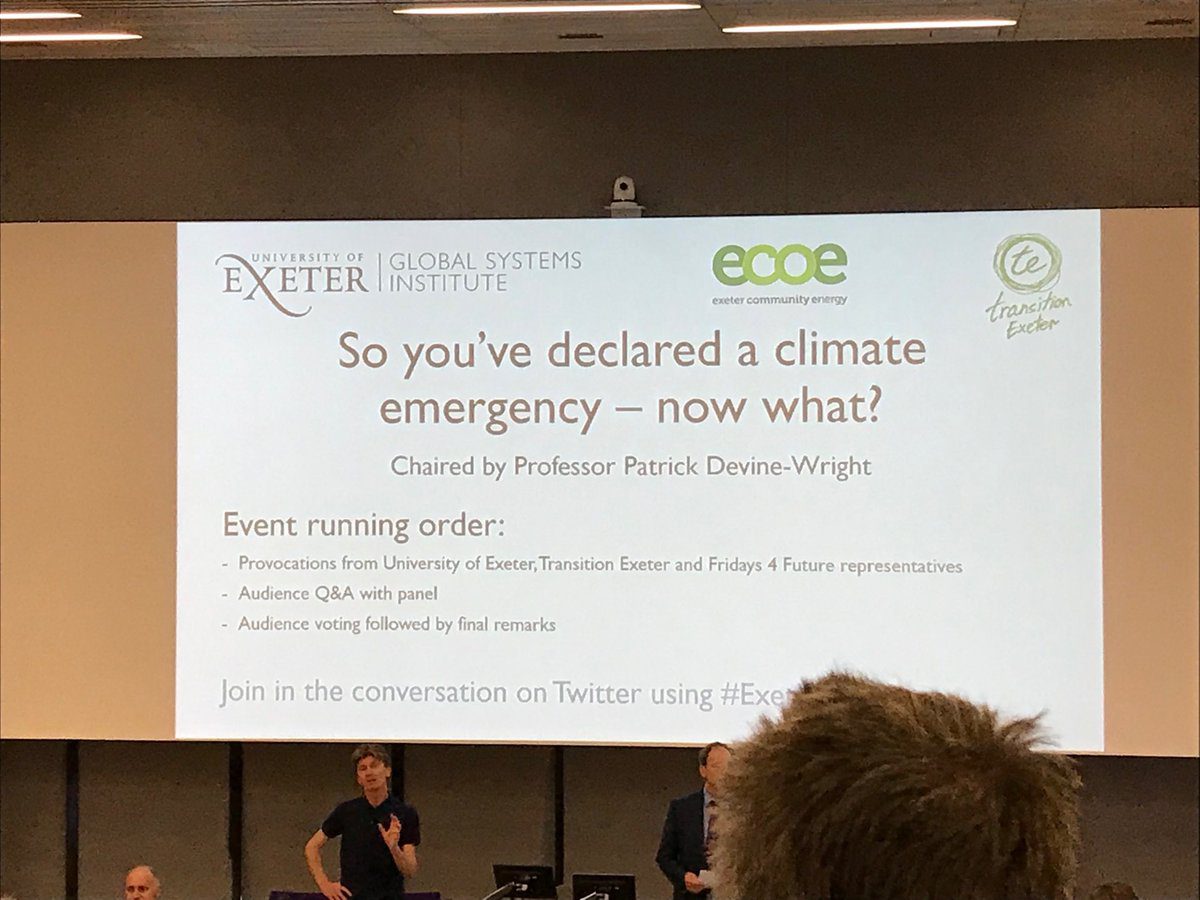 Last week I went to an excellent, and packed, event in the Alumni Auditorium at the University of Exeter, hosted by the Global Systems Institute, called ‘So you’ve declared a Climate Emergency, now what?’  It featured a panel of ‘provocateurs’ who gave short presentations and then a very lively Q&A discussion with the audience. The event was also connected online to the University’s Penryn campus, who joined in with presentations and questions.

It was chaired by Professor Patrick DevineWright, Professor Human Geography. He talked about how the University was trying to reimagine itself as a ‘civic university’, embedded in the city and playing a key role in its transformation, and then went on to introduce the event. Here is the video of the whole evening:

The evening started with different people each giving a short provocation in order to inform and initiate our conversation (you can download the slide set for the whole event here).  The first provocateur was Sophie Sleeman, one of the organisers of the Fridays for Future school strikes in Exeter. She called for the voting age to be lowered to 16, a deeper change in culture, and a Green New Deal with a target of zero carbon by 2030. 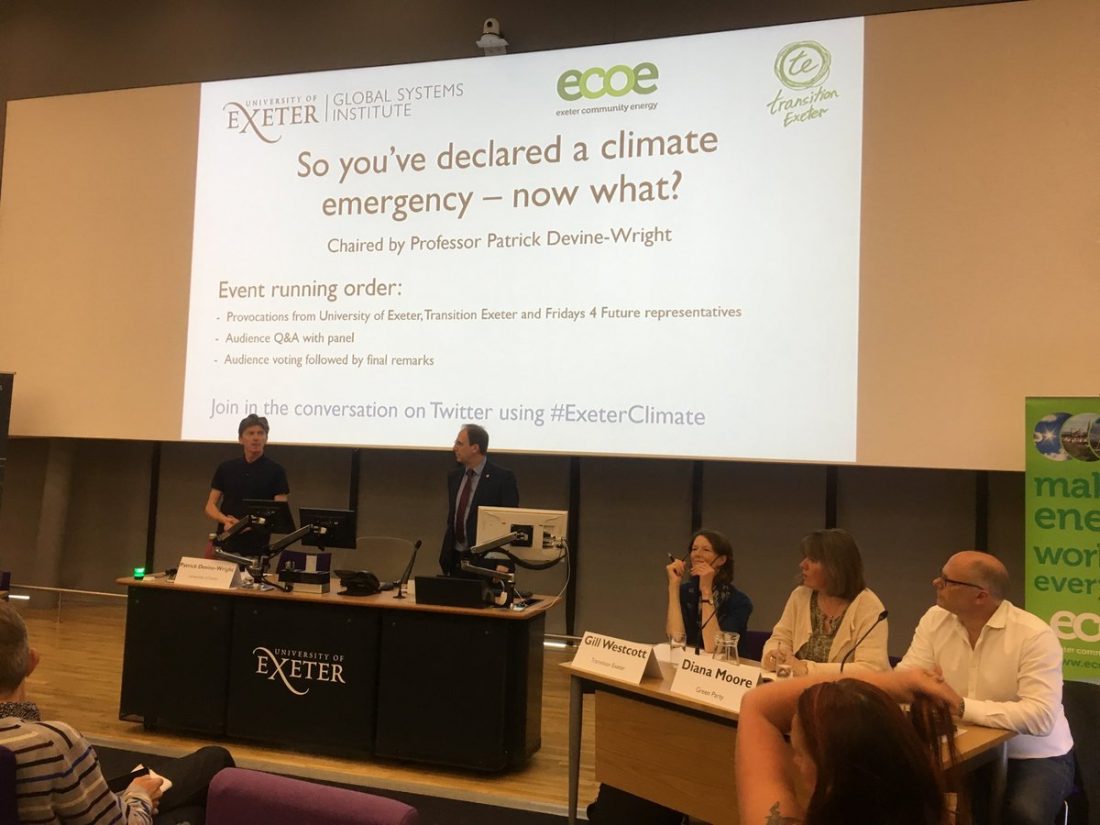 Pierre Friedlingstein, a lecturer in Mathematical Modelling of Climate Systems, conveyed how hugely challenging it would be to actually achieve zero carbon by 2025, one of XR’s key demands, and how even 2030 would be an enormous undertaking, requiring us to be 3 times more efficient than we are now. He showed how, on current trends, even 2050 looks like a stretch. But, he said, it is possible, but it is a huge, an unprecedented task.

Gill Westacott of Transition Exeter offered her provocations. The first was that there is a lot we can do as communities, but there are also some things that governments can do to transform the wider context. They could introduce a carbon tax, and personal carbon allowances (like David Fleming’s Tradeable Energy Quotas idea).  They could introduce a ‘frequent flyer levy’, where your first flight is tax free, but you pay more the more flights you take. The also suggested we needed to plant 1.5 billion trees.

In one beautiful section of her talk she gave the Chancellor’s budget for 2025, from a time where the measures of wellbeing have changed from GDP to far more useful indicators. “I am delighted to announce”, she said, and then went on to set out the improvements and increases across a range of new indicators, such as the bee survival rate, soil fertility, the amount of land under forest, the levels of greenhouse gases being emitted, the number of jobs, the levels of job satisfaction, the levels of equality, and more. It was surprisingly moving, and an idea I shall shamelessly plunder for future events. 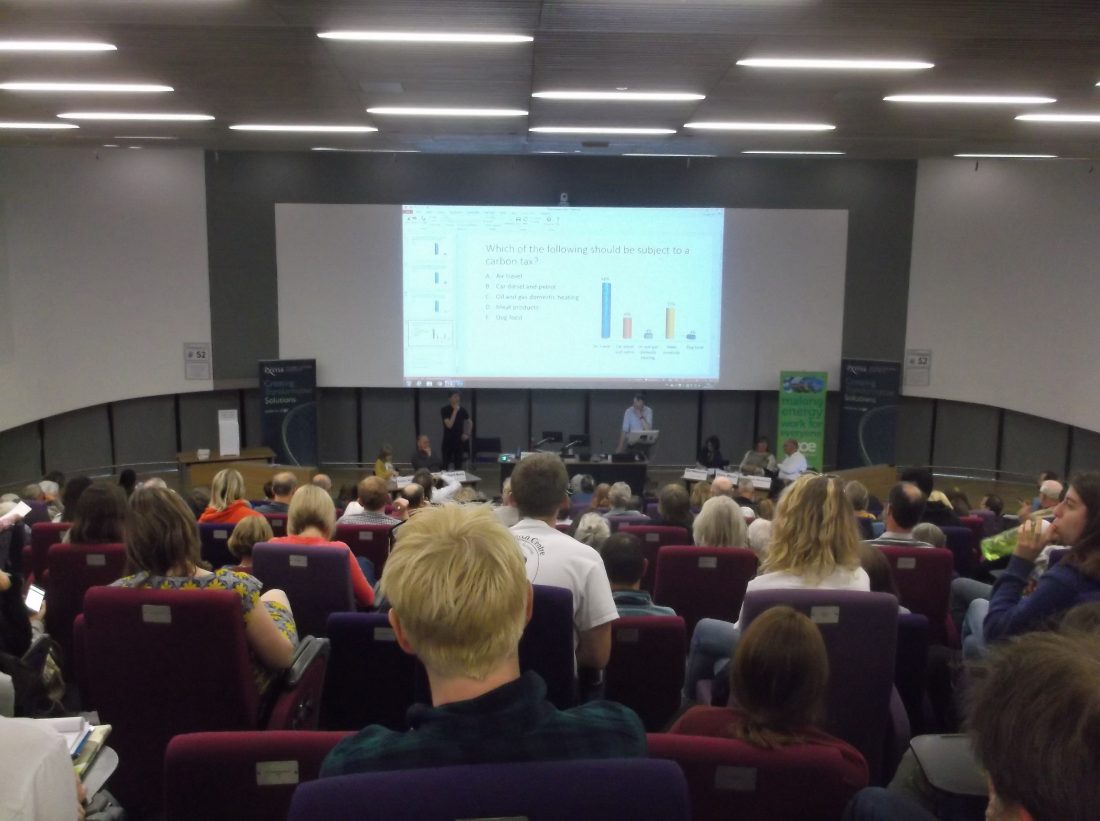 Alice Moseley was next, a lecturer in politics from the University of Exeter, who spoke about Citizens Assemblies, one of XR’s key demands. She talked about their history, their purpose, how, and why they work. To be worth doing, she said, they have to have political buy-in, i.e. local or national government who agree in advance to act upon their findings. They are especially useful, she said, in situations where politicians fail to find consensus (any issues spring to mind?!). Were there to be a climate change citizens assembly, she said, it could identify what citizens can do and what are the blockages to their doing that, what are the hardest things for government to do and how they might be shifted, how we might better regular companies and more.

The potential benefits, she said, were a rebuilding of trust, and a contribution to the creation of new forms of democratic engagement. They would create momentum and would lead to the generation of surprising recommendations that would provide legitimacy for radical action.  However, she asked, given that in 11 years we need to have already cut emissions by half, “do we have time for Citizens Assemblies?” 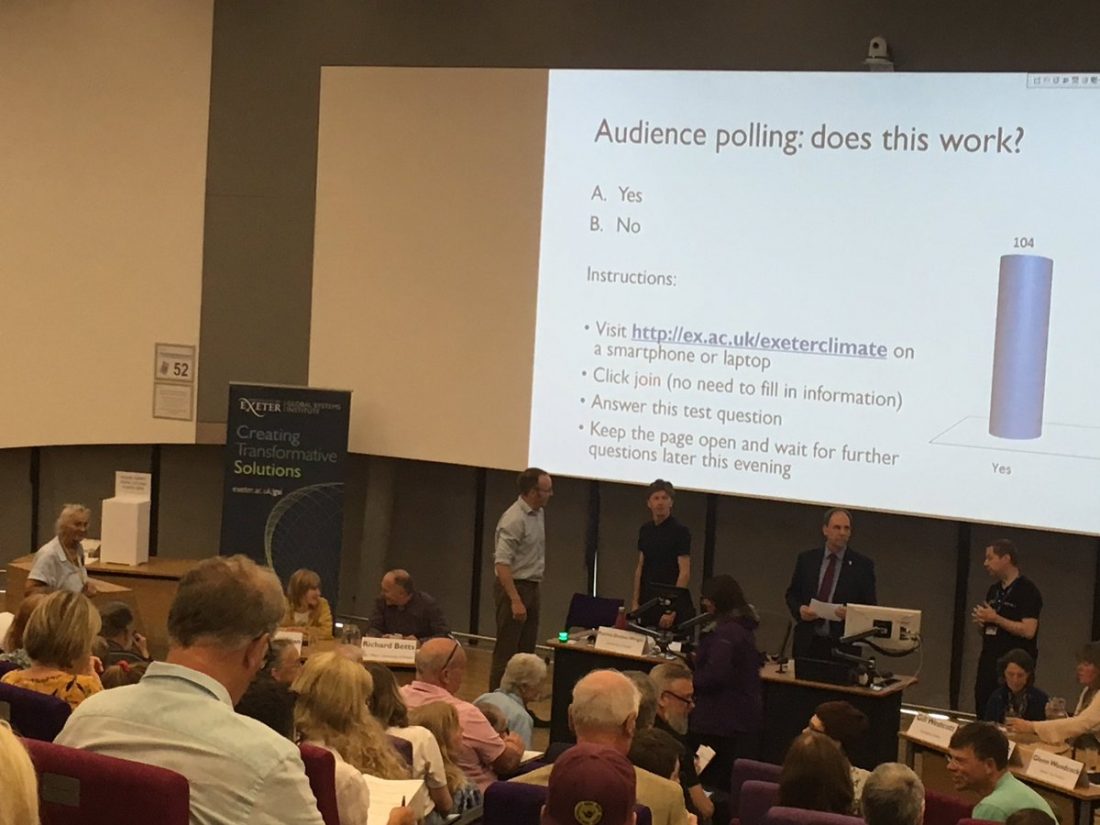 Richard Hoggett, who teaches on energy policy at the University’s Penryn campus in Cornwall, from where he beamed in live, said that in the UK the energy sector is responsible for 80% of all emissions. The system has evolved over decades, a complex system involving thousands of companies and millions of decisions. What we need to create, with great urgency, is a system that is equitable, net zero, and affordable. To create this with, say, a target of net zero by 2035, would require an extraordinary degree of change and transition. One of his suggestions was that the government needs to create an organisation like COBRA (its emergency response committee) to oversee the climate change transition. We would need different ways of measuring progress. We would need an Energy Transformation Commission. “Energy systems”, he said, “are shaped by people. And many solutions are very local. We need to put people at the heart of this”.

There was then a panel discussion, with the addition to the group of Richard Betts, Chair in Climate Impacts at the University of Exeter, Diana Moore, a Green Party city councillor and Glenn Woodcock of Exeter City Futures. People in the audience, both in Exeter and from Penryn, asked questions and the panel responded. A few highlights from that conversation were:

The questions and the conversation went in many different directions, but it was all engaging and fascinating. While nothing concrete came out of it, it was a vital space to think differently, to contemplate with others the kind of world a climate emergency could lead to if we are sufficiently brave, imaginative and brilliant. Discussions like this are taking place all around the country, and indeed all around the world. It was a bold and impassioned start.

We also did some audience polling around different questions, an approach I always have mixed feelings about as it runs the risk of people disappearing into their phones rather than connecting to each other, but finding out that far more people favoured imposing a carbon tax on aviation than on dog food was quite heartening. 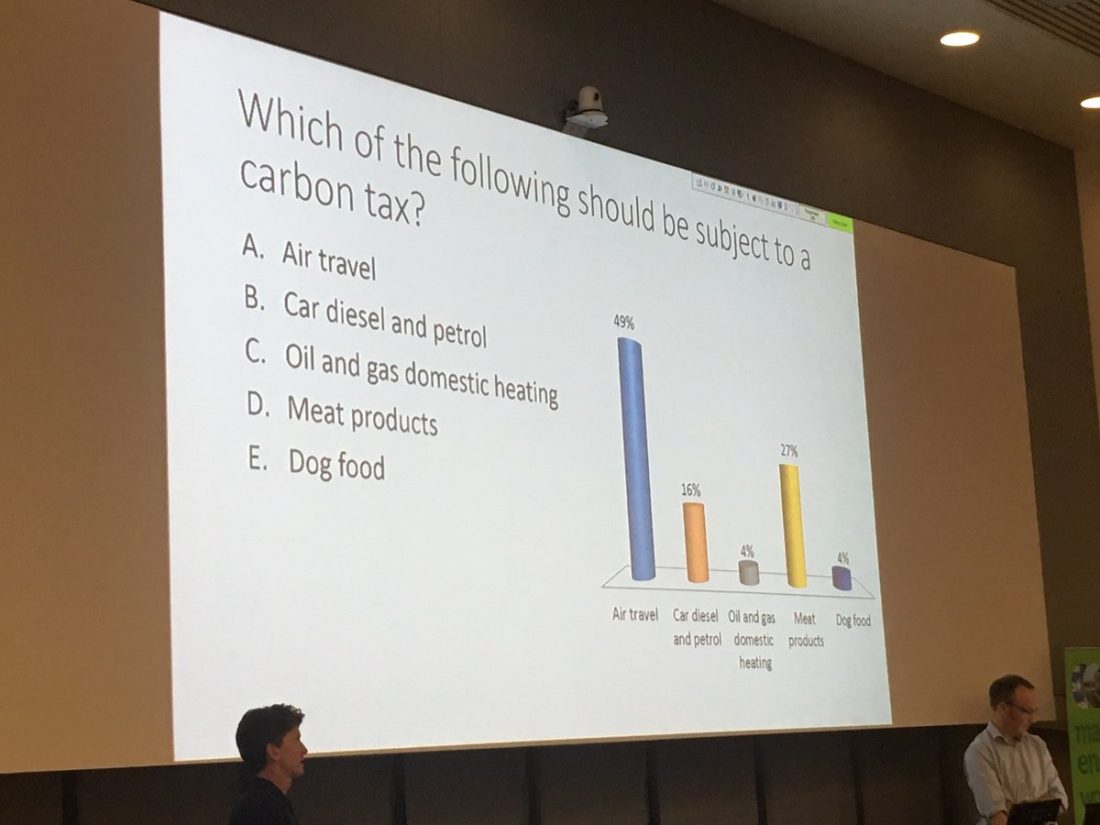 It was an especially interesting discussion to see taking place within a university, with so many students in the audience. A university like Exeter is driven by big growth and expansion plans, targeting foreign students to come to the city, the building of huge amounts of student accommodation, while also sending researchers around the world to build its international reputation. What a climate emergency would mean for them, and what a genuinely low-carbon, resilient, localised, embedded, civic, ‘anchor institution’ would look like is a huge conversation, one that will need to cultivate an imaginative culture where anything feels possible, but on the strength of this event, that process has, hopefully, begun.