On the Thursday before Christmas (a very wet day in the West Country) I headed off to Street in Somerset to attend a Great Green Gathering at Crispin School. Crispin is in the Schools in Transition pilot that started in the autumn. It is an academy secondary school, forty years old last year, and over the last fifteen it has become one of the leading schools in the country in its commitment to sustainability and to local and global care for people and the environment. Encouraging pupils to speak out and get involved in various campaigns both inside and outside the school is also a key aim.

To back-track a bit, three Crispin teachers came on the weekend residential for Schools in Transition in October. They brought five pupils with them, with an age range of 13 to 16, to the Sharpham Estate outside Totnes (in Devon). Together with teachers and pupils from Wellington College we explored what “sustainability” really means and what leadership in the context of sustainability looks like. From being a big concept “out there”, using the official language of, for example, the Brundtland Report, sustainability became more local, immediate and personal. The process of the weekend, which took us out of our heads and into hands-on projects, shifted perceptions in the group as to the scale of influence young people can have. While Wellington College pupils researched the installation of a grey and rain-water harvesting system for a new learning centre, the Crispin pupils headed off into the woods to learn about foraging for wild food, and the potential for growing food on the estate. 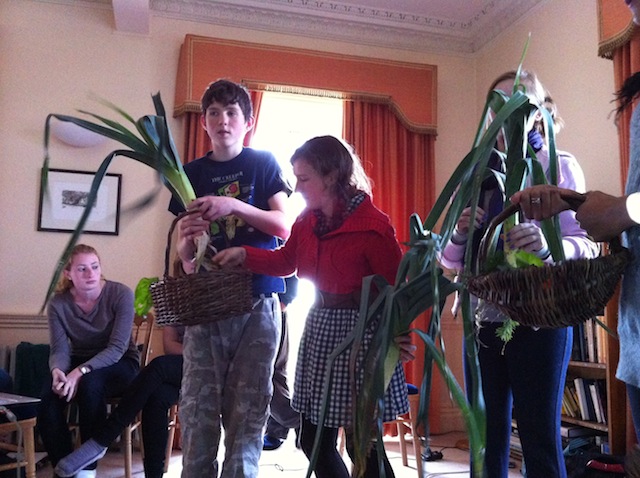 Reflecting on their experiences, Crispin pupils said: “ I learnt how to grow food and not get it from supermarkets, and how to forage. Stuff I didn’t know before about plants and how edible they are.” “There is so much we take for granted, so many things we could use but just walk past each day, instead of looking at the bigger picture.” “I found you can go for a walk in the forest and find loads of things to eat that I didn’t know you could eat.” At the final presentation of their research towards a sustainable food policy at Sharpham, the pupils brought in baskets of all the food they had found and put forward ideas on how to teach people about food, grow and forage for it, cook it and serve it to the local community and visitors. They also dumped all the packaging from their picnic lunch on the floor and challenged Sharpham to cut the waste!

In action planning for taking the sustainability agenda back into their school, the Crispin team realised that they already had a big range of activities and clubs and what was needed next was to connect it all up under a single vision. Teachers were saying: “We need to involve our young people much more in designing teaching and learning. The annual plan for the year of a club is not enough!” So the idea for the Great Green Gathering was born, Fran Thomson (former deputy head, now leader for sustainability in the school) taking the lead. Invites went out to all the clubs: Growbiz, Climate Change Action Group, Kenya Crew, Groundforce, Planet Food, Fair Trade Café and the School Council.

The meeting was introduced by Fran as: “a day of significance on which Crispin was starting on a new journey”. Fran explained that the weekend away at Sharpham had helped teachers and pupils realise how many existing groups connected to sustainability, but the many ways they connected had not been explored before, and there was also a need to find a word to replace “sustainability” (which no one likes). So there was a language challenge: “Given all these big issues, what are we about, what is the central issue that links them all together? Can we make a charter that everyone can sign up to, a new school contract for staff and pupils? Our aim now is to see ourselves as one big system: teachers and pupils working together, caring for ourselves, each other and the planet both now and in the future.” 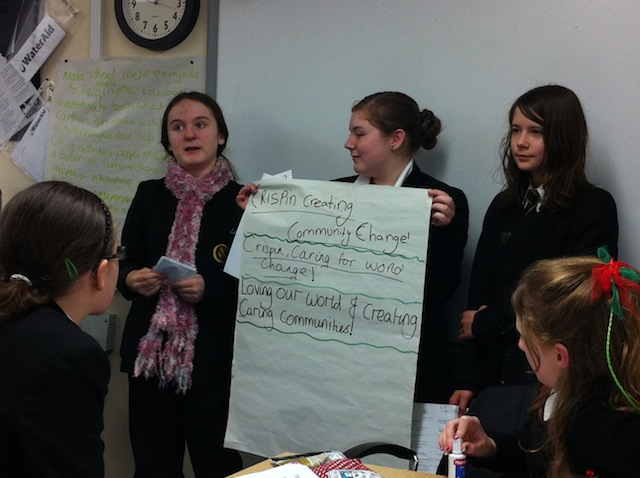 About 24 pupils then got to work in teams to think up new logos and straplines that would represent the new bigger, unified picture. What would the core principles be? What was the new vision and how would it be communicated? What should be the structure that unites all the groups together so they function as a whole? It was like the moment in a Transition community when the theme groups realise they have been beavering away on their own but now need to come back and reconnect and move into the next phase. A great deal of flip chart paper was covered with ideas and drawings, presentations were given, a feeling of “the issues are so big we need to tackle them together” was created, and some friendly argument about how this was going to be made a priority for School Council was generated.

Embracing collaboration and joined-up thinking, with pupils leading and adults facilitating, is the kind of leadership that Schools in Transition is encouraging to emerge. Experiential learning that includes action planning (in an action enquiry cycle of dreaming, doing, reflecting, modifying, back into doing) and pupils making presentations to a mixed group of adults and pupils, with feedback, were all part of the Sharpham residential weekend. The Crispin teachers who came on the weekend were already using their own systems approach to interrogate the curriculum so it was not a large step to applying systems thinking to all the clubs and school activities. On leaving Sharpham one of them commented, “I have realised that it is crucial to have sustainability embedded within the school and that it is not viewed as a ‘bolt-on’.”

With Crispin pupils now fired up to be the communicators of the new, shared vision to other pupils, teachers, the Senior Leadership Team, Governors, parents and the local community, the school is definitely in Transition—in a way that is uniquely its own. They may not even call it “Transition”, and that’s OK. I was struck by one of the outcomes of the group-think that I was in, that in the future schools like Crispin will be centres of positive thinking, innovation and community problem-solving. That came from one of the pupils.