This month’s Roundup covers stories from July and August, so we’ve quite a bit to get through!  In July, Transition City Lancaster and Transition Network came together recently to hold the first trial Roadshow.  It was the pilot for another four that will run over the next seven months.

The Lancaster event, hosted at the University of Cumbria, was a great success, and was written up here. Here is a great video about the occasion:

It’s been a time of Transition celebrations, with a few Transition birthdays going on.  Transition Town Lewes held their Seven Year Itch, a celebration of all that they have achieved during their seven years as a group.  Rob Hopkins documented the event here, and a great selection of photos taken by Mike Grenville can be found here. Here is a great chart showing everything they have achieved over the last 7 years:

Crystal Palace Transition Town were also celebrating, this time their third birthday.  Here’s a great short video they made that captures what they’ve been up to.  They also wrote a great article about their AGM, and how they have turned their AGM into a celebration event:

In our last Round Up we discussed the forthcoming opening of the ‘Sensible Garden’, a new community garden created by Crystal Palace Transition Town and others.  Well, the event was held, the great Captain Sensible himself, after who the garden was named, turned up, and a wonderful day was had.  Here’s a film about it:

Another birthday is The Bristol Pound, who are celebrating their second birthday.  They tweeted:

@BristolPound is 2 years old on Fri 19th Sept & everyone’s invited to a party! Celebrate an evening of music, market at St. Nicholas Market.

They recently produced a very beautiful Bristol Pound Tourist Map of the city.  They wrote:

“Clever tourists sniff out local-hangouts. Everyone knows that if you want the best of the best, you head to the locally-owned businesses that serve their local community.  We’re proud to announce that we’re giving Bristol’s visitors a head start this summer as we’ve created a Bristol Pound Tourist Map! It’s a glossy, colourful map of Bristol Pound businesses based in the Old City and Harbourside area”.

You can either pick one up in Bristol, if you’re passing, or download it here.

Transition Bristol have also been reflecting on their 7 years of work so far, in this fascinating piece.  Our last birthday reference is the Green Valley Grocer,

In Slaithwaite, the Green Valley Grocer celebrated its fifth birthday!  Congratulations all.

Transition Chichester held a stall at the TASTE Festival. Here they are:

@BWCE AGM votes for 7% return to investors for 3rd year running. Money that can be circulated in the #localeconomy – great stuff

They also are holding a ReStart Party, a space in which people can get electrical items repaired, facilitated by the rather wonderful Restart Project.  This weekend sees their annual Foodival event. Loads of great things are planned for the event.  We’ll tell you all about it next month, but for now, here’s the poster:

Transition Exeter ran a stall at the Exeter Green Fair. Here they are:

“Reduce, re-use, recycle” was the main message of this month’s Sustainable Saturday in Transition Town Honiton. The Transition Town Honiton event in the Mackarness Hall featured community recycling scheme Waste Not Want Not, a clothes swap, and special guest Cathy Karniewicz, Mrs Recycle (see right), was also in attendance. Cathy was showing visitors how to make windmills out of items that would have otherwise been thrown away. East Devon District Council’s Street Scene were also on hand to give people information on recycling.

May saw the Totnes Local Entrepreneurs’ Forum, a resounding success, described in a previous Round Up, but here is a great new video made of the event:

Transition Town Brixton are also planning to run a Local Entrepreneurs Forum, and are looking for entrepreneurs who would like to take part. Transition Linlithgow, in the soon-to-be-independent Scotland, recently tweeted:

Here’s a photo of the Low Port community garden team hard at work:

PL21, the Transition group in Ivybridge, Devon, have been creating a new community food garden around the Ivybridge Youth Centre.  Here’s a clipping from their local paper:

The Macclesfield Express reported that “Families take part in annual ride”, reporting on how “twenty-five cyclists aged three to 93 turned out for the ride organised by Transition Wilmslow and CycleWilmslow”.  One of those taking part was 93 year old Philip Briggs.  The paper quoted Rob Sawyer, who led the ride for CycleWilmslow: “It was fantastic that Philip joined us – I had no idea of his age until someone told me. Philip tells me that he gets out for exercise six times a week – he’s an example to us all”.

Transition Cambridge held an event focusing on Thermal Comfort in Older Homes.  Here is the handout they produced for the course.   They also ran a stall at a fair in Cambridge.  Here’s a photo them hard at work, veg in hand (see right):

TT #Letchworth‘s Growers’ Market in town this Sat morning – bring your surplus to swop & trade – see you there! http://www.ttletchworth.org/events.html

Transition Chepstow invited people along to help out at its community food growing plot at Hanley Landshare.  The Bucks Free Press reported on the return of Transition Town Marlow’s community market.  It writes “As well as meat, vegetables, bread and cakes suppliers, there are a host of stalls from craftspeople and artists.  TTM aims to run a plastic bag-free market, so organisers urge customers to bring their own”. 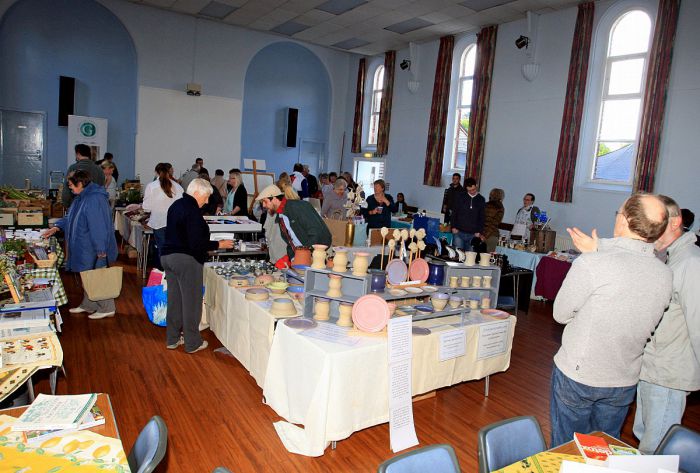 Over the last couple of weeks, the Degrowth conference in Leipzig has brought together thinkers and Degrowth activists.  One of the panels featured Transition Network trustee Tony Greenham, who had been asked to bring one image that captured what Transition is.  What did he bring?  Go to 24:10 on the video below to find out:

Rob Hopkins was recently in Liege in Belgium, visiting Transition projects there, a trip he wrote up here.  Here is a rather cool short video about the big public event that took place on his final evening there:

There have also been the usual slew of Transition newsletters.  Here is a random selection: Transition Kentish Town, Transition KW, Linlithgow, Transition Tavistock, Transition Redhill.  Transition Town Wilmslow have been shortlisted for community funding from the Skipton Building Society ‘Grassroots Giving Campaign and need your vote.  Please click here and help them out.

In Germany, Transition Town Grafing recently held a Repair Cafe, Creative Cafe and other things. Here’s a video about them:

Rob Hopkins was recently in Germany for talks to promote the German version of The Power of Just Doing Stuff, which was recently published there.  He wrote up the trip here.   He first spoke at the Heinrich Boll Foundation in Berlin:

Then he went to Bielefeld.  While there, he asked people what, for them, is Transition:

Here is the talk he gave there:

To Hungary now. In August Transition Wekerle in Budapest was the scene of a very unusual event: maybe the ever first “washable nappy picnic”.  It was organised by local mums, like a demonstration against the environmental impact of disposable nappies. 50 mothers and more children came together to change their experiences about washable nappies and eco child care. As a next step, in September the organisers set up a washable nappy club in Wekerle, they will met every second week.

At the end of the summer was organised the first public event of the landshare project in Transition Wekerle. The landshare project was set up in spring this year. During the test period 3 garden owners and about 6 gardener familly have joint to the project. Regarding the popularity of the project, hopefully in the following months the number of shared gardens and gardeners will raise up.

In the US, Transition Town Missoula recently gave a talk called Thinking beyond climate change:

Transition US have been crowdfunding to develop a US version of Transition Streets.  Here’s their video:

Transition Catskills have been in touch recently.  They wrote:

After a long time talking and figuring ourselves out, we finally “went public” this summer— hosting two community screenings of “In Transition 1.0” and a “Farm to Picnic Potluck” event where people could come out and start brainstorming ideas for the community onto a timeline.  All were well attended and there was lots of lively (and sometimes heated!) discussion, and we have built out an email list of about 85 people.  You can watch a couple of videos from the Potluck via the links in the forwarded email below that we sent out to our list.

We are presently filming a further series of outreach videos to broaden our appeal (the raw material looks great so far!), and we are planning out events for the fall, including at least two public mini-orchard plantings.  We have made good connections with local libraries about instituting a tool sharing library there, our community commercial kitchen is finally about to emerge from all the bureaucratic hoops we had to jump through, and we are working to support the planning around the Fleischmanns biomass heating project (Charles, SUNY-ESF had a lot to do with this!).  We are also going through the ideas generated at our potluck and seeing which of those we can get up and running”.

Also, here is the video they made about their “Pavilion Potluck”:

… and another called “Forage in your Yard”:

Transition Guelph in Canada had an innovative idea for a fundraiser … a canoe race!  Here’s the poster:

They later wrote up how it went here. Finally, representatives of Transition Romania participated in the Hay fest where they talked about the Transition movement and permaculture. Hay festival is one of the most famous international green and cultural festival in Romania, organised in a beautiful countryside.  Hay festival (Fin fest) is organised every year as a demonstration against the  opening of a gold mine on a UNESCO world heritage place.

That’s it for now.  See you next month, and do send us in any stories you’d like us to include.