The declarations of ‘climate emergency’ by almost 70% of UK local authorities is creating intriguing opportunities for municipalities to work alongside community groups. Debbie Bourne and Farhana Yamin share the story of the Camden ‘Think and Do‘.

What if… we turned empty shops in our high streets into pop-up imagination spaces? Spaces where communities could come together to develop ideas and projects to help tackle the climate and ecological emergency, whilst sharing a cuppa.

What if … half the UK’s local councils, who have already declared a climate and ecological emergency, decided to step it up and genuinely listen; to involve the community in co-design and what to do next?

Here in Camden, London, we’ve been lucky enough over the past few months to be working in collaboration with Camden Council to do just that. Welcome to Think and Do, Camden! 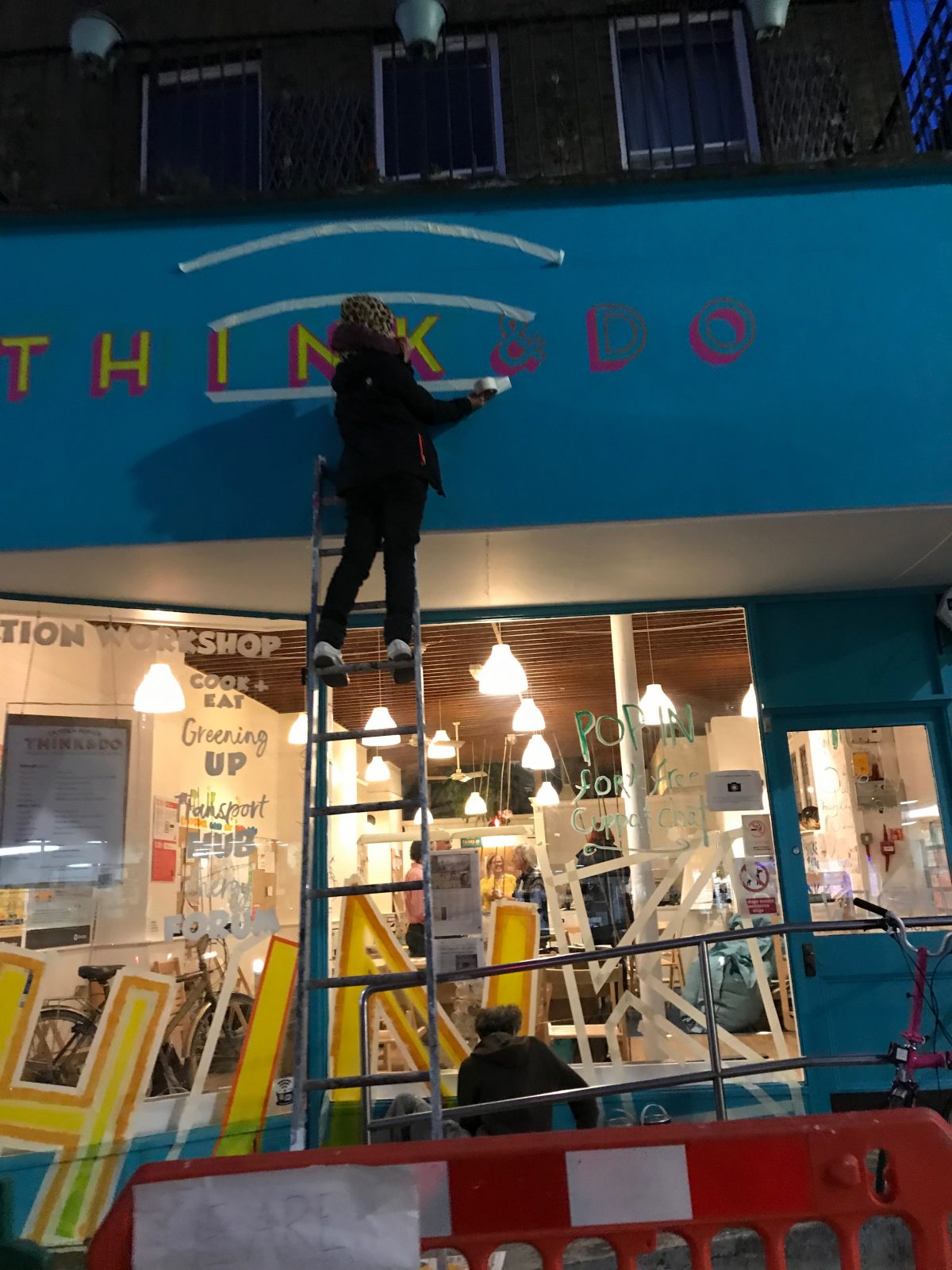 The creation of Think and Do was a direct follow-on from Camden Council’s Citizens Assembly on the Climate Crisis held in July 2019. This resulted in 17 recommendations, one of which was the mobilisation of community. Following Full Meeting on 7th October, the Council unanimously agreed to take forward all these recommendations.

Rather than end things there, the Council then took up an idea first put forward by Camden resident and international environmental lawyer Farhana Yamin at a Dartmouth Park Talk back in May 2019. This examined how citizens and councils could work together to tackle the climate emergency.

The idea was this: all councils adopting a climate emergency resolution should set up local, participatory “Think and Do” solution centres; where citizens could engage with experts, each other and the council. Georgia Gould, Camden’s Council Leader, present at the May talk, mulled over and elaborated this idea with her Strategy Team as one way to follow up the recommendations of Camden’s Citizens Assembly. The idea of a high street based “pop up” that would deliver the actions suggested by the Assembly was born. 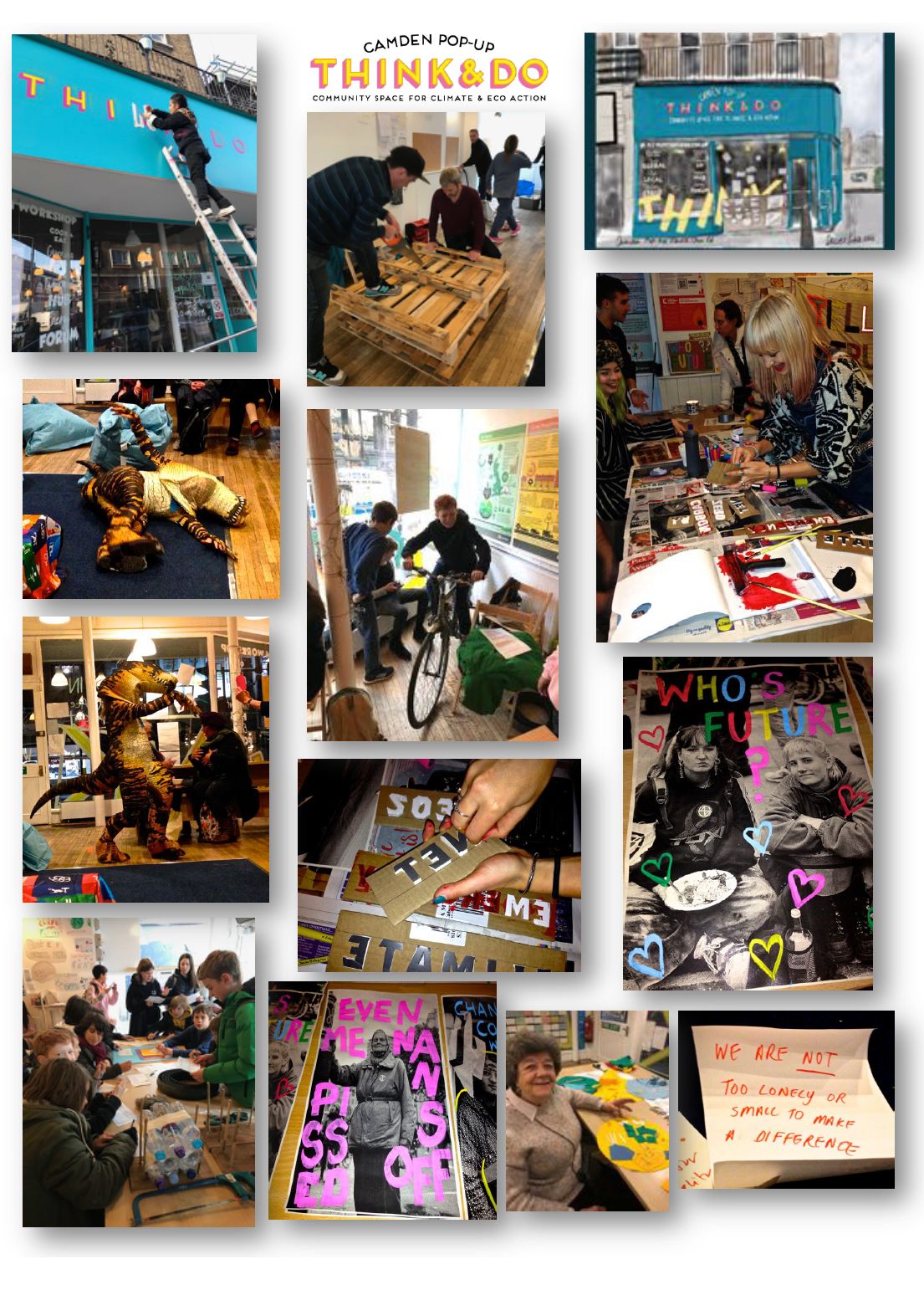 Luckily, Camden Council has a long track record of experimenting with participatory approaches. With the help of Head of Sustainability, Harold Garner, sustainability officer, Carlos Queremel, Sue Sheehan from the council’s Participation Team, and Noel Hatch, head of strategy, a meeting with community groups was held to fast track a community pop-up. To model the urgency and unity needed,  Transition Kentish Town and Camden’s Property Department went into overdrive to co-design and refurbish a council owned disused café in record breaking time.

An amazing three weeks later in November, Camden’s first Think and Do opened on 315 Kentish Town Road, 1 minute walk from Kentish Town tube station. This was the result of an intense, but genuine co-design between the council and community, with us folks at Transition KT, stepping up to coordinate. From the eye catchy logo by Transition KT local artist Ali Stephens, to furniture sourced from the community (up-cycled from pallets) and food gifted by volunteers, the pop up embodies principles of creativity, collaboration and community led responses to climate action. It upholds a vision of us living in a kinder, sharing, circular economy based on the UN’s Sustainable Development Goals that leaves no one behind. 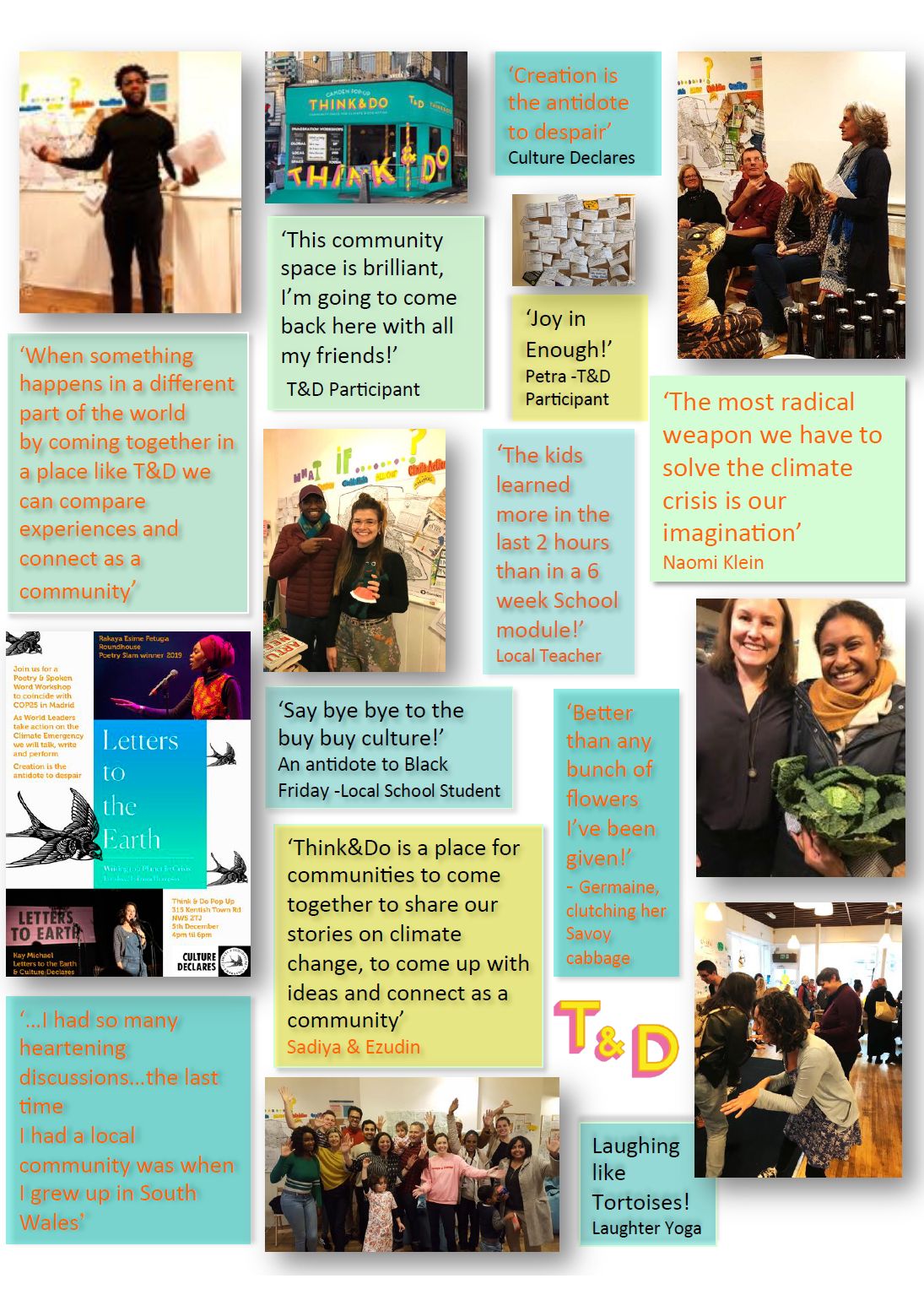 The six weeks from November-December 2019, saw a huge surge in interest for our imagination space from all across Camden and beyond! We went on to host around 80 events (yes, you read it right!) talks and workshops. These ranged from the creation of a ‘Camden Forest’, and ‘Swops Not Sweat Shops,’ to talks on fast fashion led by schools and climate justice workshops by XR. And there was lots of shared food!

The weekly “hackathons” quickly became a highlight. This 2 hour slot allowed anyone to propose a project and get help from the council to get it off the ground. People could also propose their “big idea,” and folk signed up to share their skills and time, to help deliver them.

So, what next? What if everyone could have access to imagination spaces to unleash climate action? What if all the councils in the UK  identified disused or underused spaces for their citizens, and helped set up their own “Think and do?’ Over half of UK councils have declared a climate emergency, so it is quite easy to imagine the spread of Think and Do’s everywhere! 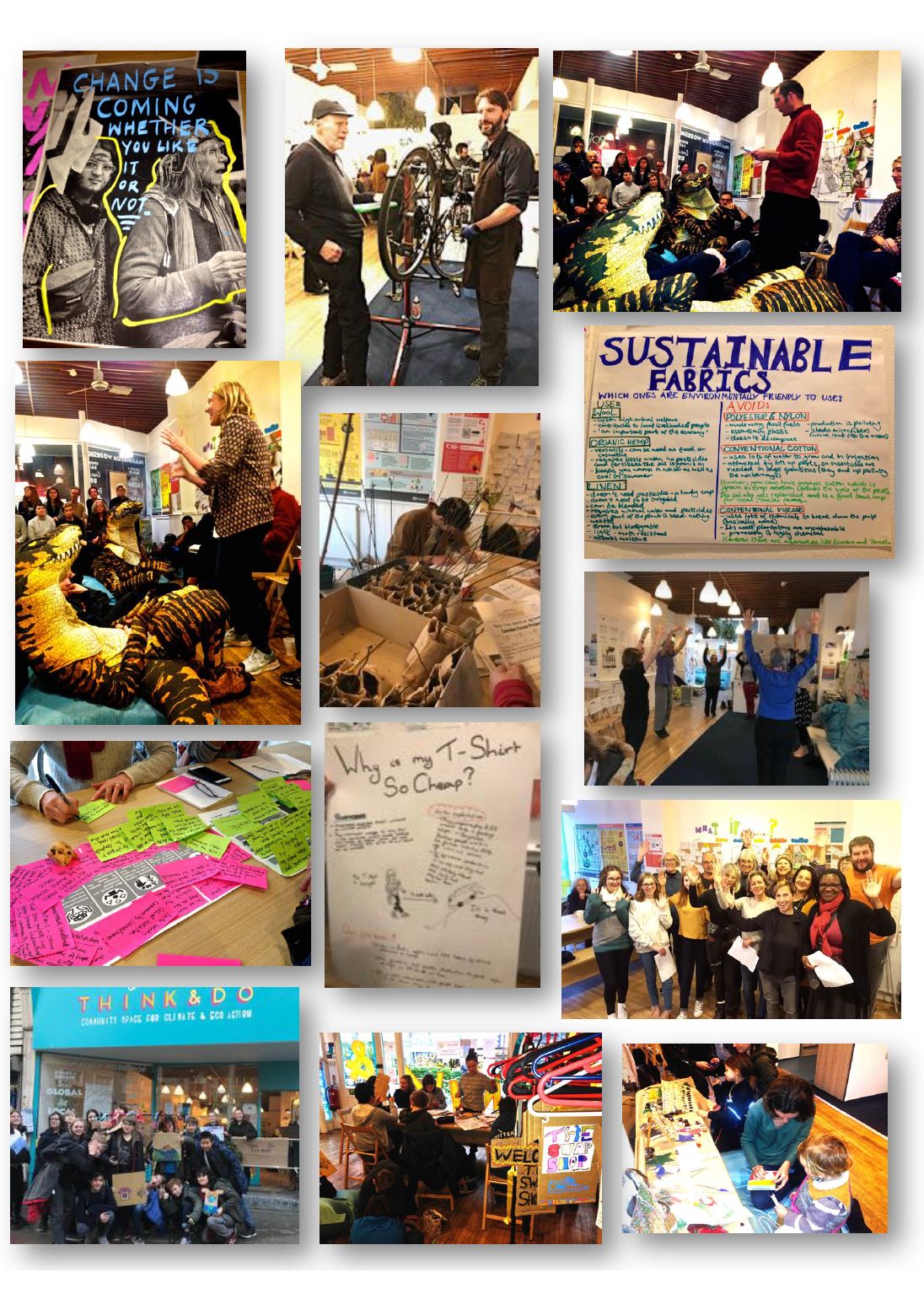 Imagine pop-ups happening in schools, universities, libraries, foyers of health centres, farmers markets and playgrounds? Good ideas can come from anywhere! Whether it’s for a day a week or a month. Imagine having a space to go where you can co-create projects and take action with the support of your council?

That is Transition Kentish Town’s vision for the UN climate summit to be held in Glasgow in November. Hundreds of Think and Do spaces, galvanising stronger connections between citizens, community groups and council staff, so that our political leaders know that citizens are taking action to transform their lives and their neighbourhoods.

Back here in Camden, in February 2020, we are entering phase 2 of Think and Do. Everyone was so thrilled with the success of the pilot Think and Do, it has been extended to end of April. The council have handed over management to community groups active in phase 1, and a small planning team has been formed to keep our imagination space going. Local community group, VegBox – a Transition Town enterprise, has stepped up to take responsibility to run a café in the Think and Do space. 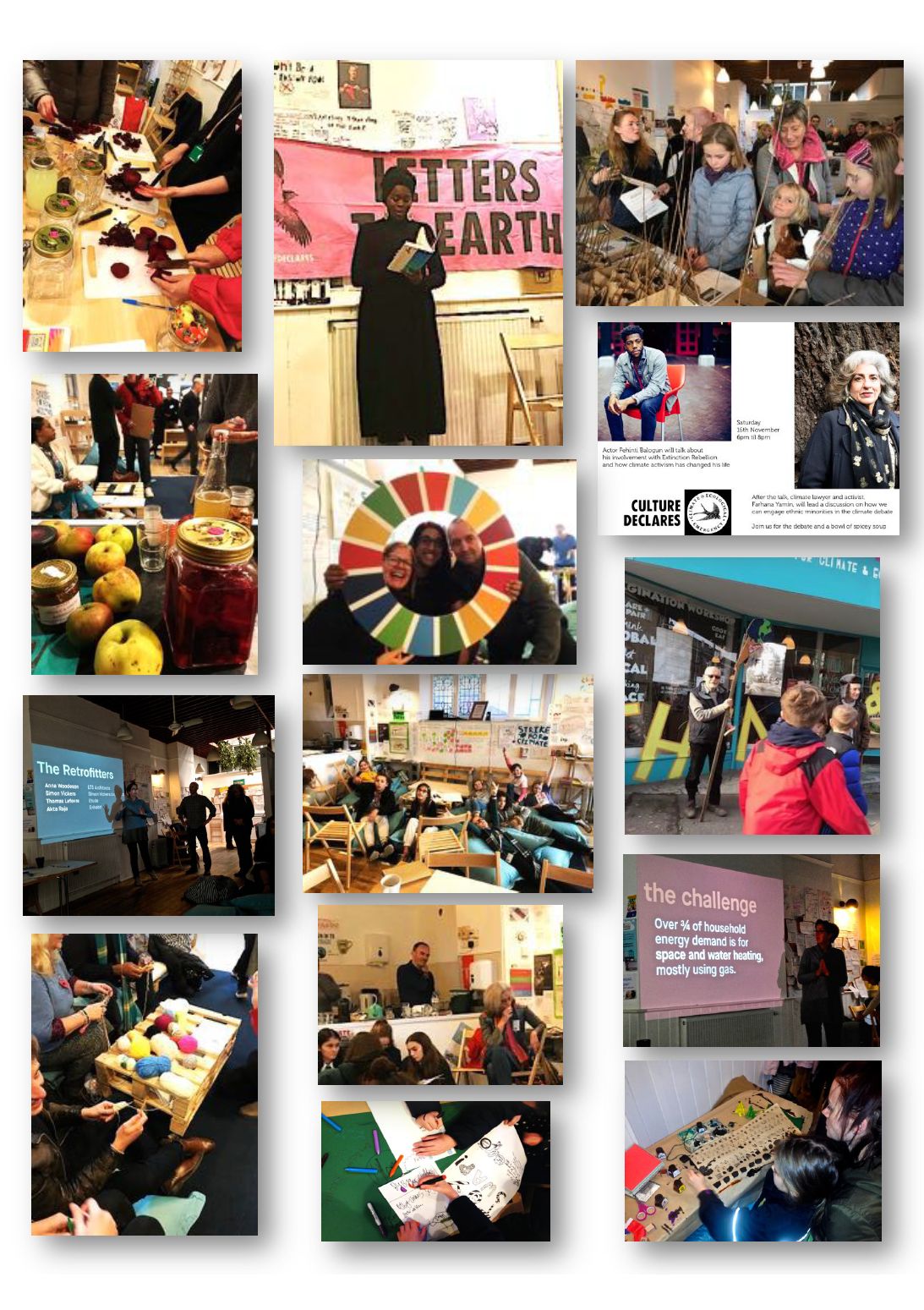 As we write this on Valentine’s Day, Phase 2 of Think and Do has launched – bringing schools strikers and a clothes swappers together – a romantic mix! The community cafe has been selling soup made from surplus veg. Ethiopian fair trade coffee, and delish homemade cakes are being served. There is always a free cuppa for those who fancy it.

We hope the next few months will encourage folk to develop the wonderful project ideas that emerged in Phase 1. The 90 ideas have been bundled into 8 major projects. These are now displayed on in an interactive journey around our imagination space and described on our brand-new website.

Phase 2 will also see us busily planning for a roll-out across the borough, and beyond. We know Councils are cash strapped, that is why we are trying to work with existing groups and find co-hosts to use existing spaces for Think and Do pop-ups. What if there was a Think and Do pop up run by every Transition group in the UK and abroad? 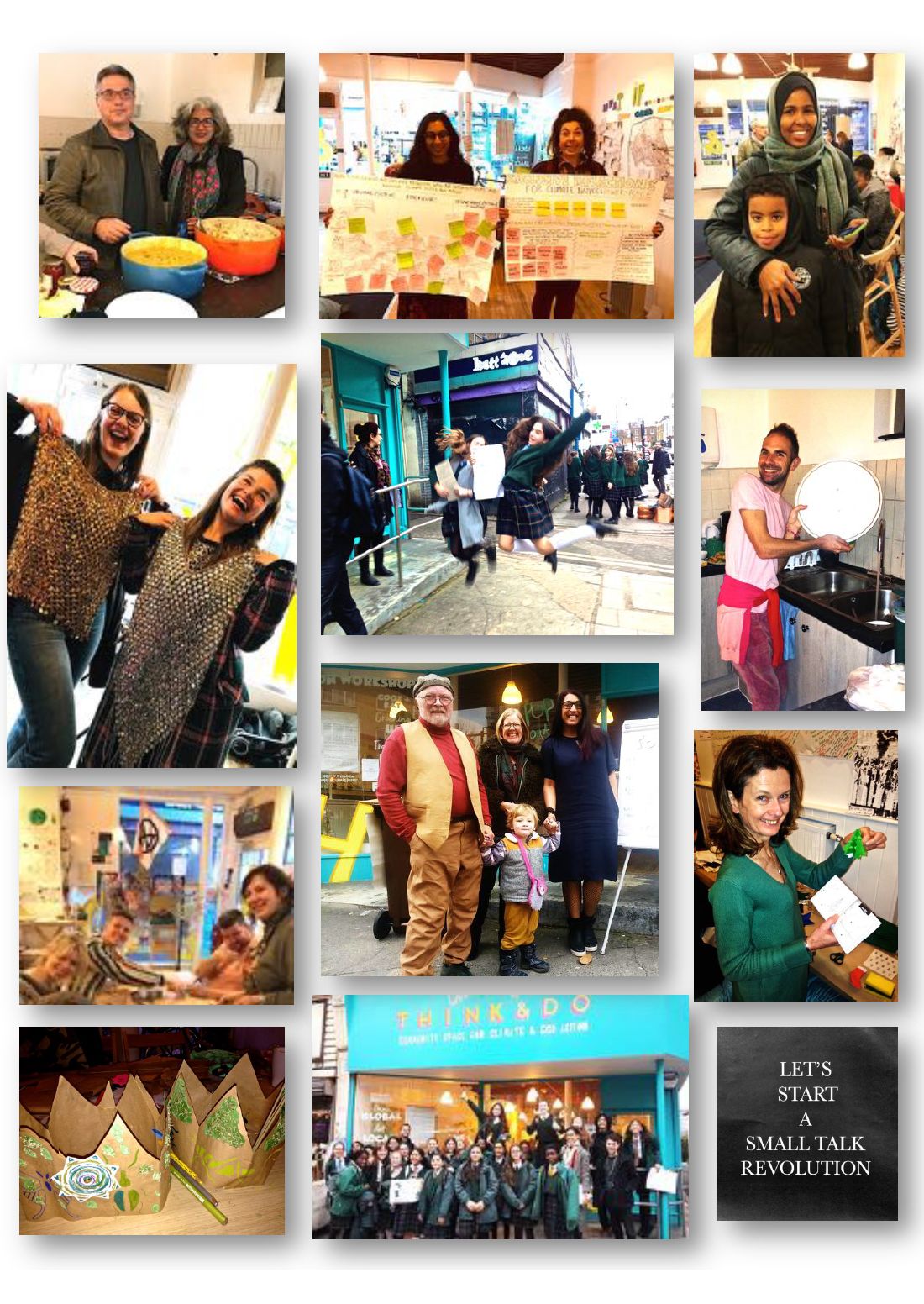 We have already agreed a trial Think and Do at a local library in May. We are currently in discussion with local schools to have climate action Think and Do summits. We have been contacted by universities and arts organisations keen to host pop ups of their own. We are also developing a starter kit to share our experiences and help others get going with their own Think and Do.

We are keen to welcome any of you wonderful Transitioners who may be reading this. Please stop by, if you are from out of town, we will find a bed for you for the night. Anything we can do to help you get a Think and Do set up in your hood, let us know! We (the authors) are open 6 days a week. Visit our website for opening times and what’s on. Anyone out there reading this in Glasgow? Hope so! Please can you get in touch? We are really keen to help you set up a Think and Do during COP in November and come and hang out.

With the dinosaurs… No! Not you, Rob! 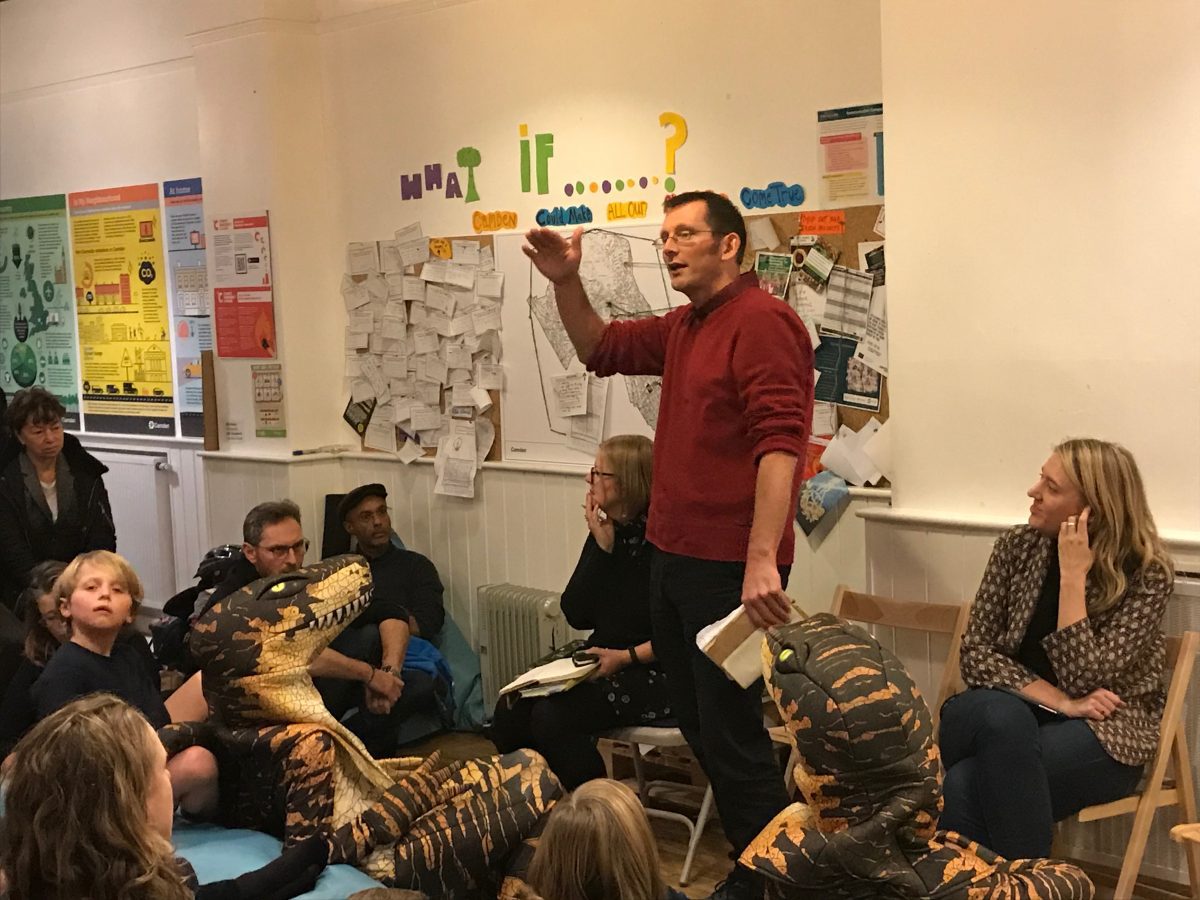 Transition Network's Rob Hopkins under the beady cold gaze of two front row dinosaurs when he presented at the Think and Do.

The Second Life of Sally Mottram: a review

It feels to me like an important moment in the evolution of...