It is said in Buddhism that just before his enlightenment, as the Buddha sat beneath the bodhi tree, he was challenged by Mara, the demon, who tried to distract him from attaining enlightenment with desire and fear.  Mara demanded that the Buddha produce a witness to confirm that he had in fact reached a level of spiritual attainment and so, the story goes, the Buddha reached down his right hand to touch the Earth, and the Earth responded “I am your witness”.  Many images of the Buddha show his right hand touching the earth.  Often the other is in his lap facing upwards.  The right hand touching the earth is said to represent Skilful Means, and the left to represent wisdom.  In the slightly bewildered days following the two weeks of COP21 in Paris, I found this metaphor of “touching the Earth” coming back to me over and again.

While many commentators rushed to post their thoughts on what happened in Paris and its outcomes, on whether the agreement constituted a historic moment or a hollow sham, whether it was a future-changing moment of united political genius, or a meaningless waste of everyone’s time, I haven’t yet done so.  There are some particularly good analyses here, here and here.  There’s not much I can add to them.

I feel the need, after 8 breathless days in Paris, to sit and reflect, to digest.  It feels to me that we find ourselves in a new world.  A world where coal lobby bosses now say that, post-COP21, they will be “hated like slave-traders”.  A world where, on paper at least, the world is now committed to a 1.5 degree target.  The language has changed, the conversation has changed.  As Martin Lukacs put it, “the first task is to never let the richest governments forget their rhetoric. Did you say 1.5 degrees? Repeat it back to them as they return to licensing the mines, mega-dams, and monocultures that will render even their paltry emission targets impossible – and then back it up with action”.  Indeed.  But for me, at this moment in time, I need to touch the Earth. 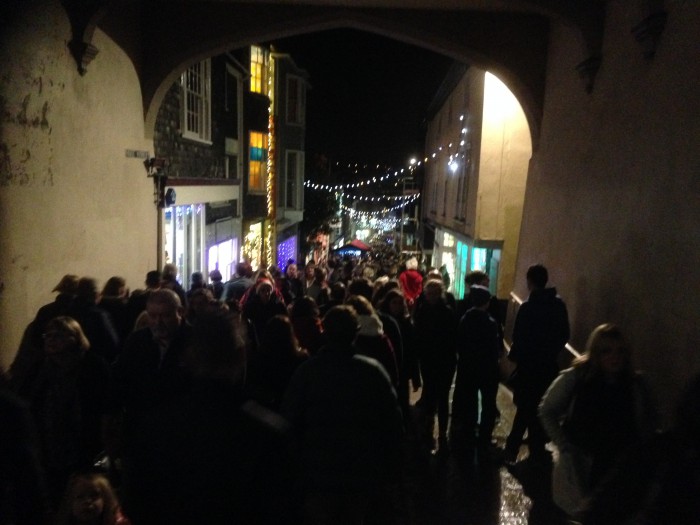 My key Earth-touching moment was at Tuesday night’s Totnes Christmas Market.  If you’ve never been, it’s one of the best reasons to live here, when for the 3 Tuesday evenings before Christmas, the High Street is blocked to cars and the streets throng with food being cooked, mulled wine being served, all kinds of music from choirs and rock bands to 6 year-olds with violins and beatboxers, people selling mistletoe.  There are stalls, all the shops stay open late, and there are people, lots and lots of people.  It’s one of my highlights of the year.  It’s the town at its finest.

Coming back to where I live, what I love about it, and the people who make it what it is, are a key part of digesting Paris.  My first port of call at the Market is the New Lion Brewery stall, a business I helped found and am very involved with, doing roaring trade (sorry) at the top of the High Street.

I visit the Kitchen Table, a social enterprise very involved with Transition and buy a helping of their mushroom stew made with the brewery’s stout and mushrooms grown using our spent grains by another social enterprise, GrowCycle, who were part of the town’s first Local Entrepreneur Forum (LEF) alongside the Brewery.  The LEF that took place in Lambeth was one of our 21 Stories of Transition.

I stop to see my son, a very talented beatboxer, performing with Glorious Chorus, a local choir, a collaboration that works brilliantly, even as the drizzle swirls down in sheets.  My journey up and down the High Street is punctuated by meeting endless people, friends who I don’t get to see very often.  The Christmas Market is a brilliant place to meet to reconnect.

I stand and watch Beltane Border Morris, a kind of black-painted death metal morris team, who move like Dementors with rhythm.  A woman in front of me, after one dance, leaves telling her friend that “they’re a bit too scary for me”.  I think they’re brilliant.  One of the dancers is the sister of Amber who is part of the Transition Network team.  Here they are:

As the Market winds down, I walk home afterwards through the drizzle, down streets whose roofs bear the solar panel proof that Transition Streets brought the people on this street out of their houses and into each others’ lives.  I pass the Guildhall, home to the Town Council that declared itself a ‘Transition Town Council’.

As I walk through the rain slicked streets, lit orange by the streetlamps, I feel myself touching the ground.  Those long days in Paris, the vast soul-less corridors of Le Bourget, the police snatch squads and false solutions at Le Grand Palais, the sheer thrill of the film ‘Demain’ and its powerful, kind and heart-felt painting of the new world that is so very very attainable, the Human Chain that went on and on and on, all of that starts to land.  For most people who felt called to be there, it was a dizzy, adrenalin and coffee-fuelled fortnight where hopes and anger and powerlessness and deep inspiration flowed through our veins.  And at least we got more sleep than most of those negotiating inside Le Bourget!  There was very little space in which to pause, breathe, reflect.

It felt to me like one of the key things we brought as Transitioners to Paris was the idea of creating space to digest.  It’s just not OK anymore to dump distressing images, thoughts or information onto people without giving time and a context within which to digest it.  It matters so much that as a movement (in its widest sense) we model the world we want to see rather than just replicating the old one, and the number of events in Paris where that didn’t happen was troubling.

So my digestion takes place walking these streets, in the orange-lit drizzle, through the throngs of people, down cobbled side roads.  In conversations with my friend Hal and his young family about sleep-deprived nights and his daughter’s sparkly hat.  In conversations with my sons’ friends about their plans for college.  Each time, I’m touching the Earth, grounding back into why all this stuff matters, into the real world where climate change is already making itself felt (it was, by far, the warmest Christmas Market I can remember) and making the space for digestion.  Feeling that it’s OK when people stop me to ask what I think of what came out of Paris to say “I don’t know.  I’m still thinking about it”. 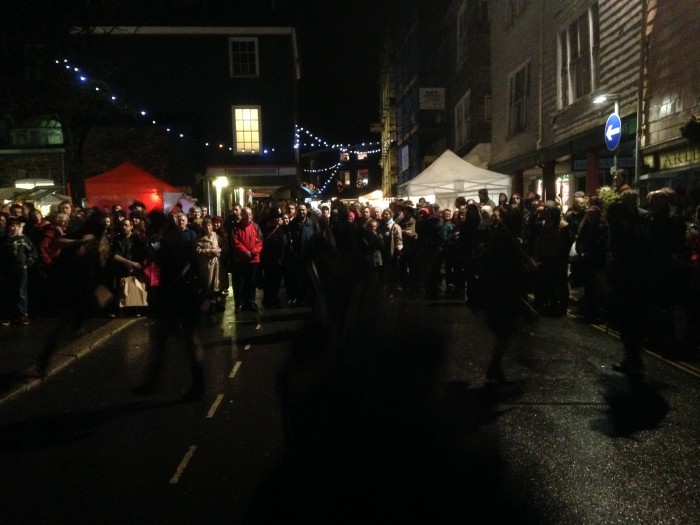 In the New Year, the conversation, the reflection, will begin.  What does this new post COP21 world mean for Transition?  What opportunities open up?  What doors can we now push on?  What can we contribute to those discussions about what a 1.5 degree world might look like?  Which bit of “back it up with action” can the Transition movement tell stories of, show already in action on the ground? Where are the gaps and what might we do differently?

But for now, we stop, we digest, we touch the Earth.  This is the penultimate post here for 2015.  The final one tomorrow will be a fascinating interview with our outgoing Inner Transition pioneer Sophy Banks.  I’d like to thank you, on behalf of everyone else who has written on this website, everyone at Transition Network, for your support, engagement and good wishes.  And wishing you a good break over the festive period and, hopefully, some time and space for you to digest and find some quiet time to allow the post-Paris dust to settle.