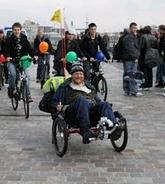 Chris Keene (that’s him on the recumbent trike he cycled to Copenhagen last winter) is a climate campaigner and a member of Transition Norwich in eastern England, and is attempting to encourage people to take action on climate change. He believes there is far too much doom and gloom in the messages about responding to climate change, which discourages people from getting involved. He’s been working on a project to show that climate action can be fun – a zero carbon world concert for a zero carbon world.

The idea is that lots of groups at the grassroots from all over the world organise leisure events which don’t cause the emission of carbon dioxide, or at least get as close to zero carbon as possible, during the weekend before the next UN climate summit (27/28 November 2010).

A number of Transition communities are already involved. Transition Melbourne are organising a concert as part of their end of year celebration, Transition Stroud are going to organise a bicycle powered concert, whilst in Norwich (where Chris is), they’re working with the students’ union at the University of East Anglia and putting on a gig there. The events don’t have to be confined to music – they could be clowning, theatre, poetry, juggling etc etc – anything so long as the act is zero carbon.

Seems that Transition Initiatives are well-placed to catalyse such actions, encouraging others in their community to organise such events.

One really important aspect of the project is that the participants are working together to produce the practical guidelines on how to deliver a zero carbon event (you can contribute by leaving a comment under ‘Organise a concert’ on the website www.zerocarbonconcert.org).

Chris says, “So let’s get together and show the politicians how to do it. They say a zero carbon world isn’t possible – we’ll prove it is. It’s a tough challenge, but with collaboration, determination and ingenuity we can do it.”