Footpaths is a way for people to meet and support each other to reduce their personal carbon footprints through a series of meetings facilitated by members and a useful handbook. It has been running for over 5 years and has been recognised to help individuals reduce their footprints. Over 30 groups have run (mainly in Leicester) and over 50 people have been trained in facilitation skills. We want to make our resources available to other Transition groups who are interested. To make you interested, Zina Zelter tells you more about how Footpaths got started, how it works and what they can provide to help you start a Footpaths group in your area.

A personal and group journey

I started thinking about working on climate change issues in the early ‘90s and by 2000 I was asking myself why I wasn’t doing it. The first answer was easy – because I’d worked primarily on peace issues all my life and now didn’t seem like a good time to stop. Also the links between war and oil made me feel it was connected anyway. But the feeling that I needed to focus on climate change grew and grew until in 2010 my partner asked me what it would take to make me want to start working on this. 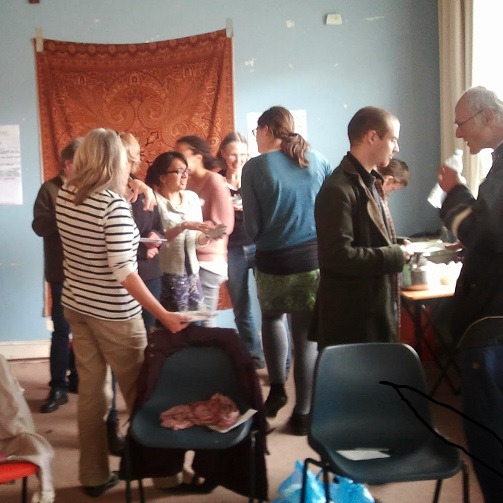 Thinking about it made me realise I’d want to see a tangible change as a result of my work. At the time I quantified it as 100 people in Leicester reducing their carbon footprints to 3 tonnes of CO2 per year (the national average is about 12 tonnes).

I was already doing things with Transition Leicester, but at this point I started talking to other Transitioners to see if they had similar ideas…and in the Summer of 2010 a small group of us started meeting fortnightly. We were all geeks of the highest order, liked each other (just as well given how much time we spent together over the next few years) and cared enough about climate change to put real time and thought into it – whatever “it” was.

And after a few meetings and meals it became clear that “it” was going to be a series of meetings for people who wanted to reduce their personal carbon footprints. At which point we sat back, said “Surely something like this already exists?” and spent a couple of of months researching the programmes already doing this kind of thing. We concluded that there were some things missing which felt essential to us. These were:

So we started developing Footpaths. Inventing games and exercises which might help us to engage with our habits/lifestyles/footprints. Designing a facilitation training which would help both experienced and people who were new to facilitation to support their Footpaths groups. Arguing about how much it was reasonable to hope people would push themselves to change and what would and would not help them to do it. And eventually each of us recruited a co-facilitator, did the facilitation training and then ran a Footpaths group to see if it worked. Those first groups ranged from religious (Quaker and Christian), to area based (on my street), to community based (one of Transition Leicester people and one in the LGBT community), and were both inspiring and scary. They also gave rise to loads more work as we then spent another 6 months changing the meeting designs and materials.

What is the aim of Footpaths?

Out of all this intensive work came a lot of respect for each other and an understanding that making changes alone is hard. Changing with other people who are doing the same is easier and more fun – and sometimes simply knowing others are going through the same process helps us to keep going. Some changes can be made much more easily by a group which supports each other – for example you can share ideas, sympathy and excitement, tools and skills, recipes, experiences and researching information. Having a community – or being part of many communities – makes us happier than when we live isolated separate lives. It also makes us stronger and more able to cope and adapt in times of change.

So Footpaths was designed with the goal of helping people create resilient communities in the face of climate change – on the basis that building communities and getting better at living and working with other people will help us to reduce our carbon footprints, and becoming less oil dependent will push us towards lower footprints and more interactive living.

To achieve that, the course and activities are designed to:

What have we learnt from running Footpaths groups?

Since the inception of Footpaths 5 years ago, over 250 people have taken part in groups. Most have been in Leicester, but they have also occurred in Holmefirth, Yorkshire and other parts of Leicestershire and groups are currently forming in Wrexham, Glasgow and Derbyshire.

We’ve learnt that (surprise surprise) every group is different and how well they work is dependant on the willingness of the participants to engage with their feelings, each other and the material – and the capacity of everyone including the facilitators to support rather than push each other to do this. But it does work. A PhD study on us found that people reduced their footprints by about 15% during the sessions and this increased to 20% over the following year.

Most people who do Footpaths stay in touch with at least a few others. Some groups have continued meeting long term. And many other carbon reducing activities have grown from it including bulk buying organic wholefoods; a green festival of making and mending; low carbon footprint recipe books and a list of local tradespeople who we’ve had good experiences of when greening our homes. 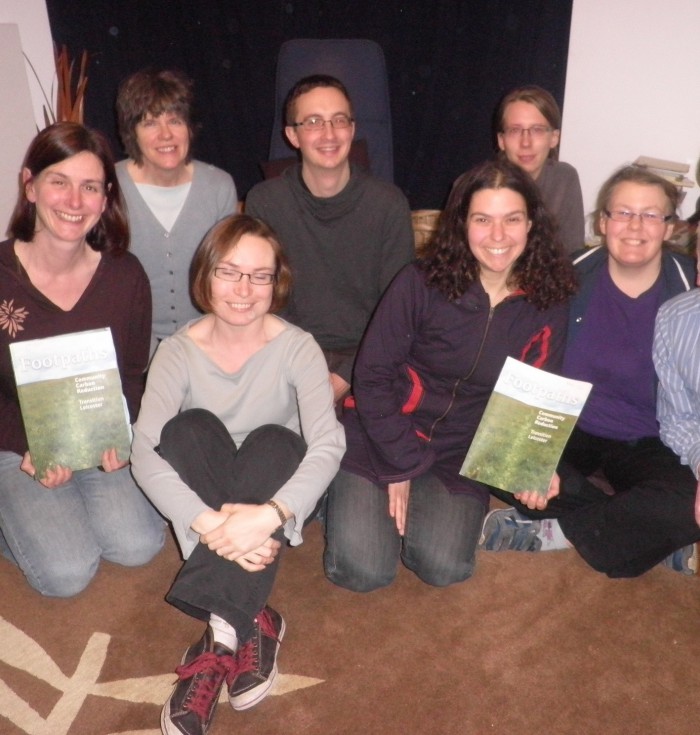 We’ve learnt that the slowest most energy consuming part of running Footpaths is gathering together people who want take part and reduce their carbon footprints. The more people talk about Footpaths to others and encourage them to take part, the more people end up in groups making changes. Which is why we are now offering it to you and your Transition groups.

Who takes part in Footpaths?

We’re often asked “Aren’t you preaching to the converted?” And the answer is frequently yes. But just because someone believes in something, doesn’t mean they are doing it. They may think green, but the average starting carbon footprint for people taking part in a Footpaths group is only slightly less than the national average – and the majority of people in every group eat meat and cheese, fly sometimes and heat all the rooms in their usually not well insulated or small homes. No matter how low our footprints, we all have areas we feel stuck in or struggle to even think about changing. And Footpaths can help with this. It can also help us to start talking about what we are doing to the people around us.

So why am I writing this for you?

Basically because we’re hoping Transition groups around the country will decide to run Footpaths groups in their own areas. What we can do in Leicester is limited by how much time we have to volunteer in so we are offering you the resources if you can find the people.

We would ask for

Our next facilitation training will be in Leicester on the 27th and 28th Feb, but they happen as and when we have enough people to run one. So please, if you are interested, have a look at our website on www.leicesterfootpaths.org.uk and get in touch on 0116 2899 074. We’d love to talk with you.