It may not be a big surprise to hear that there are a lot of bicycle keenies in Transition; almost everywhere you turn someone is lovingly riding, or cleaning, or folding, or talking about their bicycle.

Pete the chairman recently celebrated his 50th birthday by riding 100 – 150 miles per day for nearly 4 weeks across Europe (taking in three mountain ranges and nearly breaking his companions in the process) and Ben our co-founder cannot resist tinkering with everyone’s bikes, Mike the newsletter editor gazes at his Brompton with some unsettling passion, and much, much more.

As well as this, we can see a clear interest across Transition in ‘Energy’ (see the blossoming of energy projects in the projects directory), so it is with much interest we hear of Tom Foxe up in Transition Norwich who runs bicycle-powered generator workshops.

So this is copied from the Transition Norwich site with thanks: 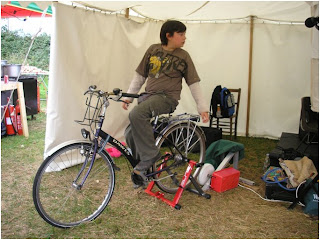 Hello, I’m Tom Foxe, and my cycling travels haven’t taken me very far yet – holidays along the coast of Holland, in Southern Ireland and the Isle of Man. Mostly I cycle to and from work in Norwich, about 5 miles a day. I became interested in bike-powered gennies (short for generator) about 10 years ago, through the internet. There are dozens of bike genny sites and lots of clips on Youtube.

My first genny was the hub of a Rutland wind generator, the white disc behind the bike above. It powered a 12 volt sound system. A battery kept the system going while riders changed over, and when people pedalled, the genny kept the battery charged. Most people generate about 50 watts easily. This will run a 100 watt sound system at medium power.

The first (2003) Human Dynamo system was very basic – microphones + mixer + keyboard amplifier, but it sounded great and people loved pedalling the bike to power the system.

The folk group Seize the Day played in Chapelfield Gardens, Norwich last Summer using the improved Human Dynamo system. We used good quality P.A. speakers and it worked so well, some people asked if we could please turn the volume down? We obliged of course.

People have asked me how a bike genny compares with mains electricity, and what can be powered by it? A one-person genny can only be used in limited situations, and cannot compare with mains electricity power-wise. In a recent TV programme the makers showed that to boil just one electric kettle (typically 2,500 watts) it took 30 or 40 people pedalling to produce enough electricity!

So what good IS a bike genny ? Well, being limited, it makes us think about using less – smaller and more efficient devices, and switching things OFF when not needed. This is a useful mindset to develop as Earth’s oil supply runs out. They now make powerful LED stage lights and Data Projectors which use 1/3 the energy of filament lamps and last many times longer. As oil runs out, unreliable mains power supply is very likely, so a backup system of batteries and bike gennies will be very useful. It will allow us to power some lights and also some important audio-visual devices independently of mains electricity, at least for as long as someone is able & willing to pedal!

Also, because of the dangers of mains electricity, outdoor public events using mains power have more red tape involved and insurance cover is more expensive. For these events, low voltage systems are much safer, cheaper and less hassle.

Having attended a bike genny workshop in May, I found there is a big demand for them – it was booked out 6 months in advance and people came from far afield, many from Transition Towns. It was a great workshop, but a no. of people doubted if they would actually get around to building their own genny afterwards.

So I decided to run a workshop in Norwich, where people will build and take away their own genny. As a bike lover, ex-electrician and electronics engineer I feel well placed to deliver this workshop, which will focus on Safety, Building the Genny and Applications.

The workshop will be followed by a Pedal Power Party (6-9 p.m.) to which Transition Norwich people and others are invited. This will feature pedal-powered lighting, cinema, live entertainment and that rare creature, a disco that doesn’t hurt your ears!