Today begins a grand experiment in Transition – a national blog created and compiled by 12 writers around the country that aims to communicate the real-life issues and experiences of being in Transition. From tomorrow we’ll be posting every day for the next three months on subjects ranging from economics to food to inner change. Each Sunday a guest editor will write on a chosen subject and set the theme for the following week.

You can see the Social Reporting homepage here

The term social reporting was first coined by David Wilcox, one of the media crew at this year’s Transition Conference. He defines it thus:

Social reporting is an emerging role, a set of skills, and a philosophy around how to mix journalism, facilitation and social media to help people develop conversations and stories for collaboration.

While mainstream reporting is usually about capturing surprise, conflict, crisis, and entertainment, and in projecting or broadcasting stories to audiences, social reporters aim to work collaboratively with other people, producing words, pictures and movies together. They may challenge and even provoke, but social reporters are sensitive to the resources and parameters of the group, community or organisation they reporting for. They are insiders rather than outsiders.

As social reporters we’ll be writing as ourselves and also as reporters from our initiatives. So we are communicating both as individuals and as social beings, as part of a collective that includes other people (and creatures and plants!). There will be intellectual and philosophical themes discussed on this blog during these autumn months, but all of these will be anchored within the physical world and living culture of Transition, in the events, projects, vegetable-growing, clothes-swapping, idea-exchanging meetings and conversations that people have on an everyday basis. 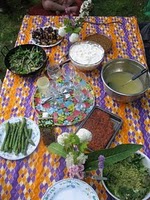 In the last decade social media, and especially blogging, has allowed many “non-expert” voices to become bolder as social movements everywhere – co-operatives, community activism, popular uprisings and neighbourhood schemes – have been creating their own collaborative network of information and exchange. It’s been our intention (that’s Ed Mitchell as producer and myself as editor) to bring together some of those voices in Transition and last spring we put out a call for 12 bloggers in the UK to tell their initiative’s story from the front-line, on line, over a three month period.

The project brings together a group of social reporters to find and collate stories that otherwise might not be heard or seen: personal reflections, community events, regional patterns, shifting cultural values, big issues of the day, the spirit of the times. The lighthearted and the deep; the challenging and the practical. Most of all it aims to capture the story of a people navigating their way through Transition and creating a new community culture: a new narrative for the ‘down curve’ of consumption and energy use. To show and record what is really happening in Transition towns across the country, in the neighbourhood, inside ourselves.

During the summer we gave two workshops on Social Media and Storytelling at the Sunrise Festival and at the Transition Conference and invited people to become the media and cover the events as they took place. At the conference David Wilcox talked about capturing the moment on video and we practiced interviewing each other (on and off camera), talked about the search for narrative, the importance of paying attention, being the anchor at events, the policy of non-interference and feedback.

In August we had the difficult task of selecting the twelve reporters, following a number of different criteria. This month I’ve been talking with and meeting the crew who, as you can see from the map (and the photos!) come from everywhere in the UK. from the mountains of Scotland to the flatlands of East Anglia. They also come from initiatives at all stages – from those starting up to the well-established, from the successful to the uncertain; from cities, bio-regions, villages and market towns, from neighbourhoods and communities that are urban and rural, rich and poor, traditional and progressive . . . and everything else in between. 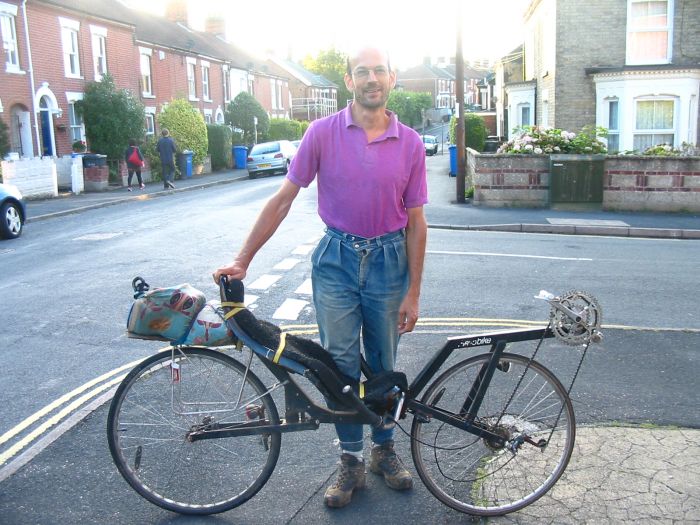 In some ways the project is an expansion of my “home station” on Transition Norwich’s This Low Carbon Life where a community of bloggers have been exploring Transition themes for the last two years. Our blog was inspired by a movement within the initiative known as Transition 2.0, a response to climate change in which a group of us engaged in personal carbon reduction within small neighbourhood circles. It brought an immediate direct focus to our lives-in-Transition that wasn’t expressed in our community events or group discussions. Suddenly we were looking at our daily engagement with peak oil, clocking our energy use, radically changing our food-buying habits, our attitude to waste and water and the challenging discussions we had on those subjects provided both the physical and philosophical material for our writing and photography.

As we began to explore these low-carbon shifts in our lives the blog began to act as a record. It highlighted the work of other groups, worked as a feedback mechanism, as continuity and as a friendly and intelligent way to celebrate and disseminate Transtion. Most of all it gave us an opportunity to a work together as individuals and social beings, and to sustain momentum in a way other configurations (including some of those early neighbourhood groups) have not been able to. Perhaps the greatest gift it has given us, as writers and editors, is the practice of allowing diversity. The ability to listen to twelve different voices, not just one’s own.

It was this writing-in-convergence that inspired the ambitious idea of bringing together a national team of bloggers. A crew of writers who would provide an editorial reflection of what is happening in initiatives around the county that you might not find within the newsy, info-packed marketing of most Transition websites and newsletters.

This is above all things a community blog. It’s not just a Me record, it’s a We record. The Reporters write as individuals, but also with an eye to everyone else in the team and their respective initiatives. Writing is a notoriously independent activity. It’s a creative struggle between you and that keyboard. But to work as communication writing needs an awareness of everyone and everything else, and above all your fellow writers who are on the front line with you.

We’re busy people in Transition. As Shane Hughes from Transition Bedford once said: we’re holding two worlds at once in our hands, an old and a new one. Both of which make demands on our attention and our time. But if we can make time and space to speak in a language that allows us to see what we are really doing together with our woodpiles and shared meals, with our vegetable gardens and community events, Ingredients and Tools, with our meetings and struggles to understand, it brings a nobility and depth of meaning into all our actions. It give us courage as we confront a future that is uncertain and a civilisation that is at a breaking point.

Our top-down culture is all about result and engineering that result. About spin and data, about power and control and individuals who establish themselves at the top. Transition is not built on these slash-and-burn empire principles, it’s grown according to the grassroots principles of permaculture – the fostering of beneficial relationships between all living beings. Fairshare, peoplecare, earthcare. It takes time and relishes the process that leads to result. And it needs a different kind of media to reflect those relationships and connections – a media above all that is collaborative and empathic, created by people within the experience of downshift rather than by commentators from the outside.

One of the aims of the Social Reporting pilot is to show that Transition is above all a creative process, a permaculture work-in-progress if you like. Like all creative works it has stable elements: the kind of structures and elements Rob Hopkins has been compiling for the upcoming The Transition Companion. But it also has times of flux and struggle in which new ideas break through and old concepts break down.

There are a lot of shifts we undergo which challenge our silo “gotta do it my way” mentality and a lot of pressure from that spin-and-data world to prevent and minimise what we say. We have to be flexible in ways we don’t always enjoy and let go of life-long habits and aspirations, not least our ideas of success. Creative process means some ideas don’t work, some people don’t stay, some groups don’t last. What captures the poignancy of those experiences, gives value, makes everything worthwhile, keeps everything going, are the people who write about it and the people who read what they write.

So to begin this great work-in-Transition the Social Reporters will be introducing themselves and their initiatives over the next fortnight. In October Peter Lipman will open our first month writing on The Big Picture, and in November, Sophy Banks our second month on Inner Transition. Right now I’m very happy to introduce to you our blog crew in the order they will appear over the next two weeks: Adrienne (Lewes), Ann (Bro-Dyfi), Caroline (Lancaster), Jay (Totnes), Jo (Finsbury Park), Joe (Heathrow), Kerry (Glasgow), Marella (Omagh), Mark (Bungay/Norwich), Rachel (Dursley), Teen (Black Isle), Martin (Cambridge). Do join us all from tomorrow and take part in this unique writers’ venture. . . Happy reading!

Photos: Charlotte; Erik, one of the Norwich bloggers with bike outside The Nectar Cafe; John and Carol working on their straw bale house from Transition Downham Market and Villages; Mark leads a Bee and Flower walk on the Bungay Beehive Day; Cover of the forthcoming Transition Companion by Rob Hopkins; Ann’s market garden in Wales.