At the age of 17, I resolved never to use a particular phrase, which sadly, it seems to me, is once again increasingly common in everyday English usage.  I can’t stand it.  It’s a term the Global Warming Policy Foundation were quoted as using in a lamentable piece of climate activist-bashing in last weekend’s ‘Mail on Sunday’.  “At the end of the day”, they said, “someone will have to be held accountable for us committing economic suicide”.

No, it’s not the “someone will have to be held accountable for us committing economic suicide” bit, awesomely stupid and sodden with irony though it is.  It is, the article would have you believe, climate change activists who are responsible for high energy bills, not privatisation, big energy companies and the demands of their shareholders, and the possibility that it might actually be a good idea to do something to prevent runaway climate change.  Rather, what has me reaching for the Rant Button this morning is the “at the end of the day” part of that sentence. 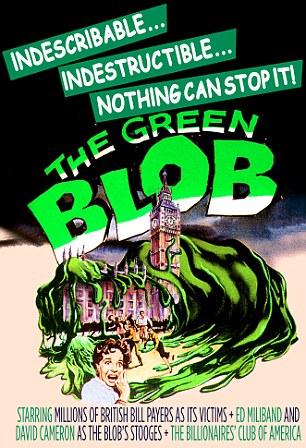 In my mid teens I spent many hours engrossed in a phone in radio show on my local radio station, the since-re-branded-as-something-else GWR Radio.  The Dave Barrett Phone-In, like most late night phone-ins since, offered a haven for a wide range of views, from the enlightened (rare) to the bigoted and uninformed (very common).

Dave’s show would alternate between his Problems Night where people would ring in to discuss their intimate relationship and sexual health issues with him (I mean, why would you?), shows that discussed UFOs, crop circles, ghosts and so on, and then the more general, anything-goes phone in, usually with a theme.   Sometimes just as entertaining were the people who would ring in just to be rude to him, or to wind him up in various creative ways.

To this day I wonder if the tale of “Simon” and his brother-in-law was for real.  Apparently, he had gone round to see his sister, who, it turned out, was going out, so he had decided to stay and watch TV with her husband instead.

“Anyway Dave, one thing lead to another”, and before long, he and his brother-in-law were having passionate, full-on sex on the living room floor, at which point the sister returned home.  She was, as one might imagine, more than just a little upset.  I’ll always remember his plaintive “but Dave, she won’t speak to me any more!”, the response to which was Dave’s rather shocked “I think she might need a little bit of time”…

I remember ringing him one time to debate nuclear weapons, and his using “at the end of the day, the world’s a dangerous place” to close down and therefore brush aside everything I had said up to that point before cutting me off to go to an ad break.  I fumed.

It is one step beyond the less offensive but still irritating “yes, but”.  “Yes, but” is used in conversations to mean “I realise you’ve been talking for the last little while, and I completely don’t agree but now I want to tell you what I think and need some sort of sound as recognition that you’ve said some things, but I couldn’t tell you what they were”.  But “at the end of the day” goes beyond that.

When you are losing an argument, your “at the end of the day” needs to be a big one.  “At the end of the day”-type arguments carry the absolutist gravitas of points such as “you basically can’t really trust people”, “the world’s a dangerous place”, or the one that makes me scream: “but, at the end of the day, business is business” … something sweeping which somehow, it is imagined, brings the weight of common sense, or what is presented as majority opinion, however misinformed, rallying to your side very quickly.  The Global Warming Policy Foundation’s “Someone will have to be held accountable for us committing economic suicide” is a classic “at the end of the day”.

It’s a point that takes a lot longer to argue with it than it takes to make it.  What one would like to do in response is to make the point that the best way to “commit economic suicide” is to allow the world to warm by 6 degrees, to unleash weird weather on the world, to allow large parts of the world to be ravaged by drought, flood, famine, unpredictable weather, fires, etc etc. That approach is probably the best definition of “economic suicide” one could think of.

But that conversation has been closed down by an “at the end of the day”.  Dave Barrett would be proud (he still works on radio and also does some TV work by the way, and if he reads this, Dave, thanks for the years of entertainment.  In my dreams he had a major shift in world view, was one of the founders of Transition Swindon, and doesn’t say “at the end of the day” anymore).

Yet somehow if you want to really communicate the kinds of nonsense pedalled by GWPF, it’s a useful tool.  Watch out for it.  It’s just not one I intend adopting.  At the end of the day.