I walked into the Wild Heart Gathering in a very irritable and frustrated frame of mind. I had faced firsthand the results of people’s fear based wanting to own and fence off a part of the earth as if they could control it. At a place called Northall 2 or 3 miles south west of Danehill the public footpaths are marked as clearly as they have been in the rest of the country so far. That is where the similarity ends. Just through the gate fierce sounding dogs bark. They are fastened in so I enter only to find no trace of  the pathway lost as it is in the obviously private driveway shared between 2 houses. I go to open a gate and see a sign just in time warning me of loose dogs. I find another way through and end up on a track way that the map says is a bridleway, however this track is labelled private at the road. I follow it. It ends in large gates, closed, and with a warning of loose dogs.

In a transition world, I fantisize, people who acted in this socially unacceptable way would be discouraged from owning any land at all.

I stay on the C roads for the rest of the way; I have a brief foray to rejoin the path that should take me straight into the festival fields and come to a blank, twice encountering fields that could simply contain young cows, and not bullocks but after my experience with the landowners around here I ‘m taking no chances. I think back with longing to the Isle of Purbeck and their beautifully marked and honoured footpaths and byways. Life is clearly different in East Sussex.

I discover there is a history of it. Mike Grenville, of Transition Forest Row, tells me of the Sackvilles, a family that have owned land in the area for centuries. They were known to confiscate people’s pigs that foraged on their land, and deport to Australia those that collected bracken on their land! I fear the inhabitants of Northall are of similar ilk.

Wild Heart Gathering takes place twice a year on Colin Godman farm, (a farm since 1550, and known to have been involved in smuggling wool for export) , some 6 miles south of Forest Row, to celebrate Spring and Autumn. It is strange coming upon a festival; it takes me a while to settle into it. I have been to several over the years, starting with Glastonbury in the eighties when it wasn’t socially acceptable to go to such celebrations. Things have moved on indeed; I come across grandmothers, mothers and families with pushchairs, & young teenagers on adventure holidays, as well as the usual mix of those seeking and those offering enlightenment, tucked in amongst those seeking and offering commodities of all kinds from Indian silk skirts to antique kettles. The food as ever is taken care of by the wonderful fairly  traded and locally sourced vegan cafe run by Buddhafield performing their usual task of offering a different way for those hooked on the unhealthy junk food diet with added possibilities of finding out about Buddhism in a very accessible way.

Next morning as Mike and I boil a Kelly kettle for breakfast freshly picked nettle tea I meet up with Susie Prater. I know her for she is daughter to Nick Prater who I have blogged about before; fellow communard at Bowden House. Susie, when she was just 17, was the only person amongst a plethora of Totnesian song writers and musicians brave enough to come into high school with me and enable a group of teenagers to write their own eco lyrics to perform at the first Transition Town Totnes Youth Music festival in 2007. A talented singer in her own right she has performed at Glastonbury as well as many other festivals, and performs regularly at Acoustic Haven, Bowden House’s very own monthly music extravaganza.

Lots of passer bys stop to find out about Mike’ Kelly kettle. From a tiny quantity of dry moss and bark a small fire is lit, the cylinder placed above, and small twigs pushed down the central chamber heat water for tea in the outer chamber around in less time than an electric kettle boils. Not only a very eco alternative to heating a small amount of water, it is also great fun and very satisfying to heat your water in this way.

By the time the opening circle finally happens; festival time does not follow English punctuality, I have settled in more to my surroundings.  We form a circle around the maypole that has been carried by a group of some 15 people across two fields to be erected in the centre of the main field. We are welcomed by a man whose work is teaching self sufficiency skills. It is wonderful, from a transition point of view, to him say that he has learnt that self sufficiency is not the way to build a healthy community; only working together can do that.

We sing a song together to the earth. It goes “Thank you, I love you. I’m sorry, please forgive me”

There is a strong wave of emotion palpable through the circle of well over 100 people holding hands. It begins to seem that those ideals first mocked, and then marginalised in the 60s are not dead, are alive and well, and enjoyed by all ages now some 50 years later.

I take a stroll around the colourful stalls amongst the colourful people. I find people teaching flint knapping, selling newly made wood burning stoves, and old iron kettles and pans, a demonstration of a van that runs on water, and know that times have moved on. The traditional skills are valued again, alongside new ideas, and old useful objects are being sold alongside new. Here, in this small south eastern gathering old and young are celebrating together at the change of the season both the old ways and the new. The clouds blow by, and the sun streams down on us out of a bright blue sky. 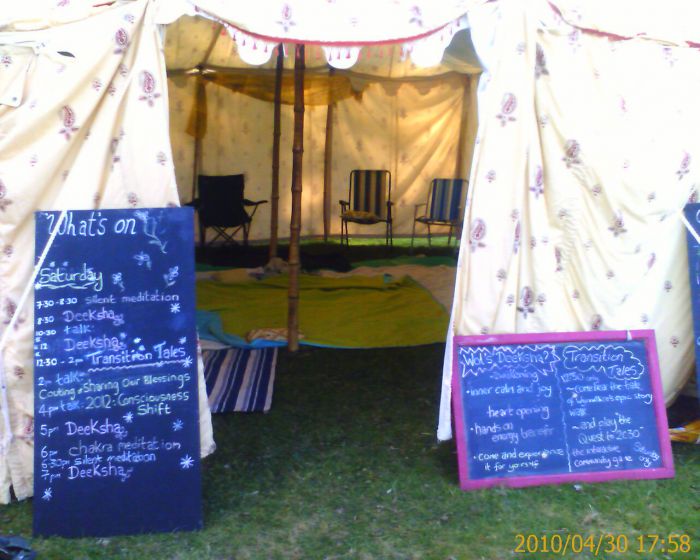