Sometimes in a life a moment happens, when something in you – which was dormant for a long time – suddenly awakes; being triggered by something very unexpected. And never goes to sleep again for a long time…at least that’s what I hope 🙂  This is somehow what has happened to me in regards to Transition.  Having been a “silent” supporter of green themes & issues all my life, I never felt quite called to action. Probably lazyness, but perhaps also because often I perceived the suggested solutions to the world’s problems as being too absolute, too dogmatic, too radical and/or too politically extreme.

All aspects I don’t resonate with very well. Yet probably also due to my Buddhist practices and the inspiration I got from wonderful humans like Christopher Titmus (him too being from Totnes; teaching Buddhism globally since 1975 and having stood for Parliament for the Green Party UK in 1986 and 1992 already), Joanna Macy, Stephan Harding, Charles Eisenstein and many wonderful friends and humans all over the world (my “peak oil posse” so to speak) I realized more and more that “silent support” is indeed important,  but certainly often not enough.

In which vessel to fill than this newfound longing for a more visible, active role in making the world a better place to live?

Alas: The universe delivered!  It first put Auroville in India and than the Schumacher College (Totnes/UK) into my life. There I got into contact with Rob, Ben, Hal, Fiona, Sophy, Naresh & and all the TN team in about 2008/9 (first as teachers and later as friends), and than suddenly – while packing my stuff going back home to Bielefeld after yet another wonderful short course at Schumacher – it hit me:

This is it.
This – the Transition approach – is exactly the real-life “middle way” I was looking for:

A balanced, non-dogmatic, common-sense, people-friendy, result-oriented, inner and out aspects honouring way of attempting the impossible.  And all that together with others, in small & large groups and networks of likeminded, yet very diverse people in my street, my neighbourhood, my town, my region, my country, my continent and my world.  Wow! Overwhelming; yet somehow so natural that resistance was futile 🙂 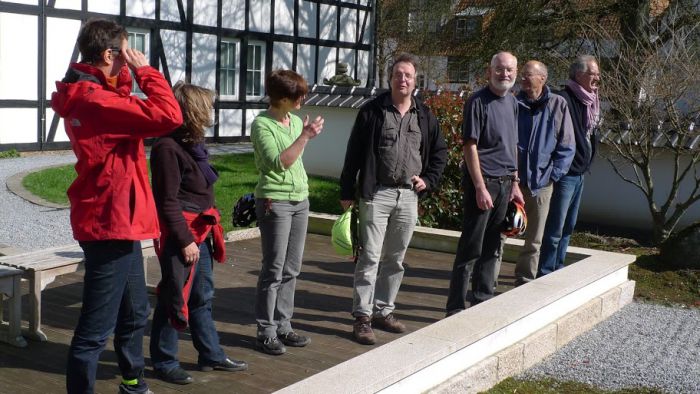 So here I am; having started my transition journey in 2008, still struggling, still having many more questions than answers, still
searching, still sometimes overwhelmed by the challenges, and yet still 100% convinced that this “middle way” is exactly what is needed in our world on a local-to-global scale.  To have us all feel much more connected and embedded by our local “sangha” – and still realize that we are in it all together as humans – globally.

So onwards and upwards my fellow Transitioners and _ettes, carry on – and “stiff upper lip”, as you British so aptly put it sometimes 🙂