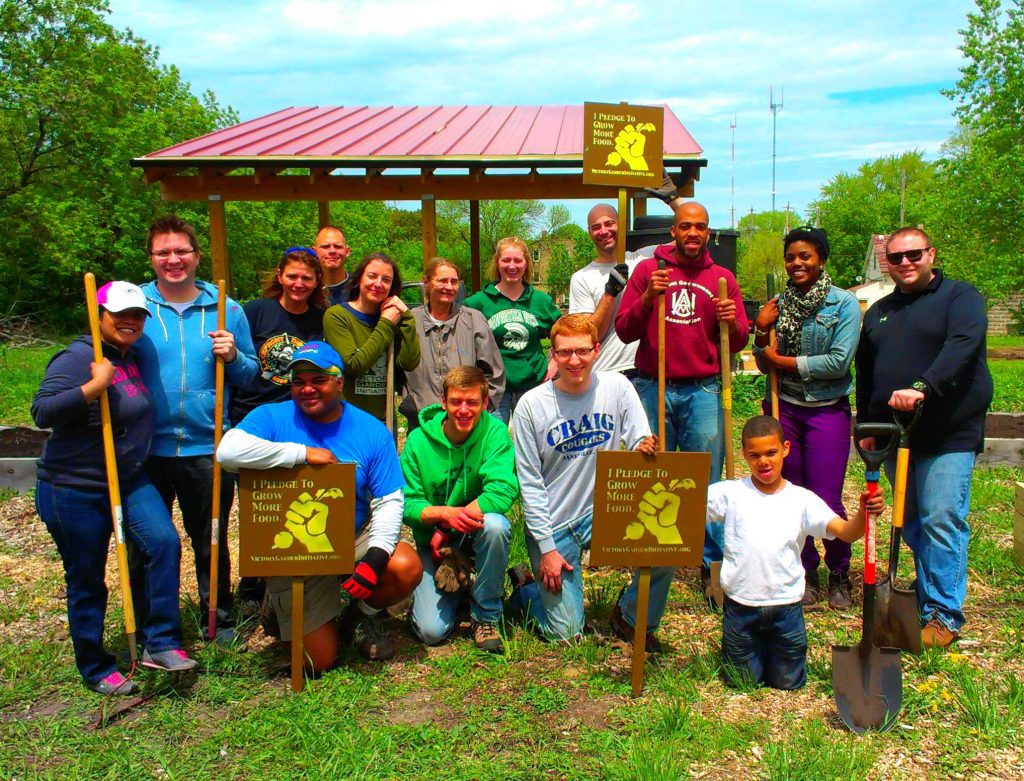 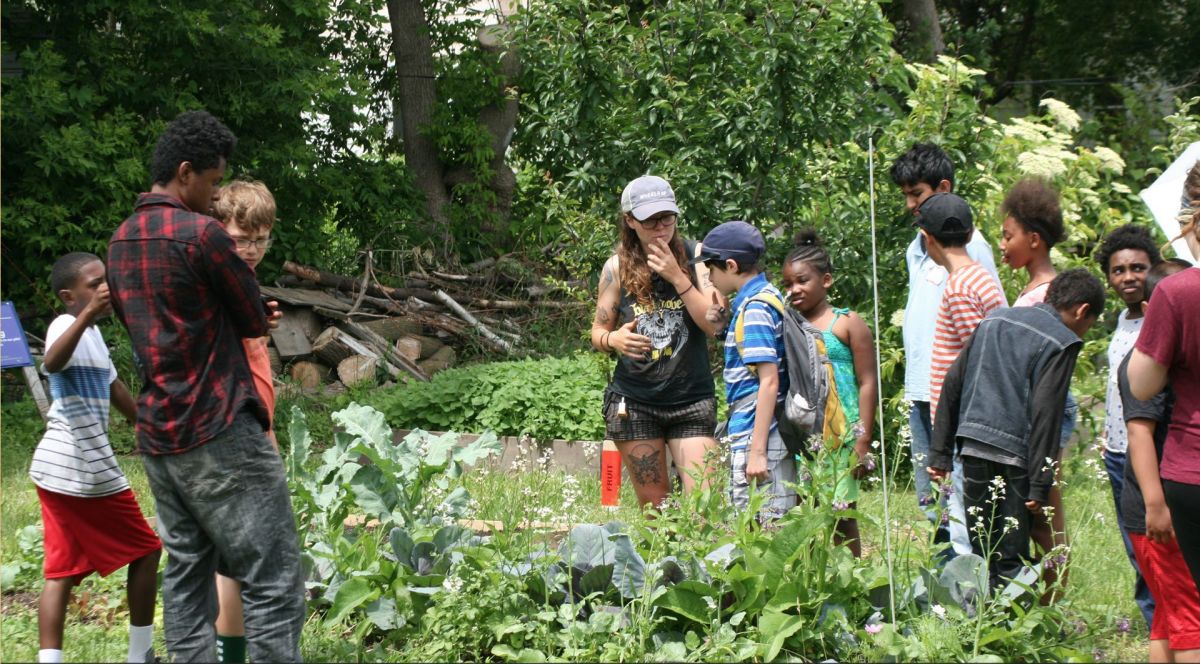 During the first two world wars, governments in the US, Europe, and Australia promoted the development of “victory gardens” to increase food productivity and free up resources to support their respective war efforts. It is estimated that these victory gardens, planted and cultivated in the yards of ordinary citizens, yielded an amount of fruits and vegetables equal to contemporary commercial farms. Gardeners were also encouraged to keep backyard chickens for eggs and soil fertilization. To return this sense of empowerment, food sovereignty, and resilience to the people, Transition Milwaukee helped to launch and incubate the Victory Garden Initiative, which recently celebrated installing its 4,000th garden.

When Victory Garden Initiative founder Gretchen Mead first moved to Milwaukee to serve as a social worker in a child and adolescent psychiatric unit, her eyes were opened to how the Standard American Diet (“SAD,” as she calls it) was contributing to her young patients’ mental health issues. Then, in 2008, as a member of Transition Milwaukee’s initial steering group, Mead proposed a program to develop front-yard gardens as a way to cultivate a more socially-just and sustainable food system. Because Transition Milwaukee was focused at that time on responding to a deepening financial crisis, climate change, and peak oil, they quickly embraced victory gardens as a strategy that would help them meaningfully address all of these concerns at once.

“We were reading The Transition Handbook and having a shared epiphany about the Earth’s fragile ecosystems and globally-centralized infrastructure,” reports Mead. “Many of us began fearing the worst and became passionately devoted to creating a more sustainable future. Growing our own food was a big part of this, and we took to gardening our own front-yards, rooftops, patios, and other empty spaces. Our focus was having it all be micro-local, so as not to be dependent on fossil fuels. That was some of the original energy. As we grew and matured and confronted issues like institutionalized racism, poverty, and a lack of knowledge needed to grow food, we really started to think about how local food is not just a response to economic crisis, but that these gardens are needed to build resilience in all parts of Milwaukee, regardless of what happens.” 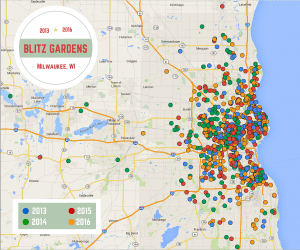 Indeed, Richard Heinberg, author and Senior Fellow at Post Carbon Institute, observes that our current global supply chain consumes roughly 10 calories of fossil fuel energy to produce just one calorie of food. Furthermore, as citizens have been encouraged to contribute to society by maintaining manicured lawns, zoning laws have been enacted to discourage home-based food production. As more and more people are waking up to the reality that residential lawns require an average of 150 hours a year to maintain and use 10 times more pesticides and herbicides than even large corporate farms, they are also realizing that organic gardens require significantly less work, fewer chemicals, and provide many more benefits than the purely ornamental landscapes we’ve become so accustomed to.

The Victory Garden Initiative launched with a Memorial Day Blitz, installing 40 gardens over the three-day weekend (35 of which were completed in a single day). Although the core group organizing this program began with just eight people, nearly 100 turned out to volunteer, as gardens were planted in yards, at schools and churches, and even on rooftops.

“Our reasons for generating momentum for a grassroots local food movement were both ecological and economic during a time of scarcity,” explains Jessica Cohodes, co-founder and original steering group member of Transition Milwaukee. “Many volunteers were unemployed or underemployed, and had both the time and motivation to experiment with alternative methods of resource generation. We were educated do-gooders saving the world with our shovels and laptops.”

Following the success of their first Blitz, the Victory Garden Initiative continued to grow. Working with city government, it helped to re-establish chicken-keeping and bee-keeping as legal activities, and opened up new avenues for urban agriculture by passing legislation to allow for hoop houses, rainwater catchment, and other useful garden accessories in residential areas. Mead expanded on her initial idea in developing a proposal for the Bloomberg Mayoral Challenge, winning first place in Milwaukee and sixth out of 305 nationally. 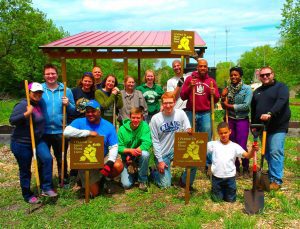 This win helped solidify Milwaukee as a community devoted to urban agriculture and locally-grown food. At least partly as a result, the City’s Environmental Collaboration Office has now established a HOME GR/OWN initiative to transform its blighted neighborhoods into greenspaces and gardens. The movement has grown so strong, in fact, that two other nonprofits have subsequently formed to help fill the need for installing gardens and achieving food security in the Milwaukee area.

As the Victory Garden Initiative grew beyond Transition Milwaukee, it became its own nonprofit, which now employs three to four staff members at any given time. VGI secured a vacant two-block plot and turned it into a working farm, where they offer programs to engage residents in composting, rainwater harvesting, and food production. The Victory Garden Urban Farm, previously known as Concordia Gardens, also partners with a local food pantry, offers a pay-what-you-can Community U-Pick Garden, and serves as a base for their YEP! Youth Education Program, providing workshops and internships that teach the next generation the joys and importance of growing their own food.

VGI recently celebrated their 10th anniversary by purchasing a 2,300 square foot building across the street from their farm, where they are using one floor as a community classroom and event space, and the other for offices. Formerly both a pub and a church, this building will soon have a commercial kitchen and an attached greenhouse to assist with farm-to-table events and other educational programs.

Their annual Memorial Day Blitzes have only increased in popularity over the past decade. 100 gardens were planted in VGI’s second year, 150 in the third, and 300 in the fourth. Now, 10 years later, over 500 gardens are planted every Memorial Day Weekend as a patriotic act of taking responsibility for producing one’s own food.

“The evolution of citizenship is neatly nestled within the value derived from a visible garden in your front-yard,” says Cohodes. “It’s a victory for both food and for a prosperous democracy. The food grown in wartime victory gardens was ‘fighting’ food. The food grown in today’s gardens is ‘power’ food.”