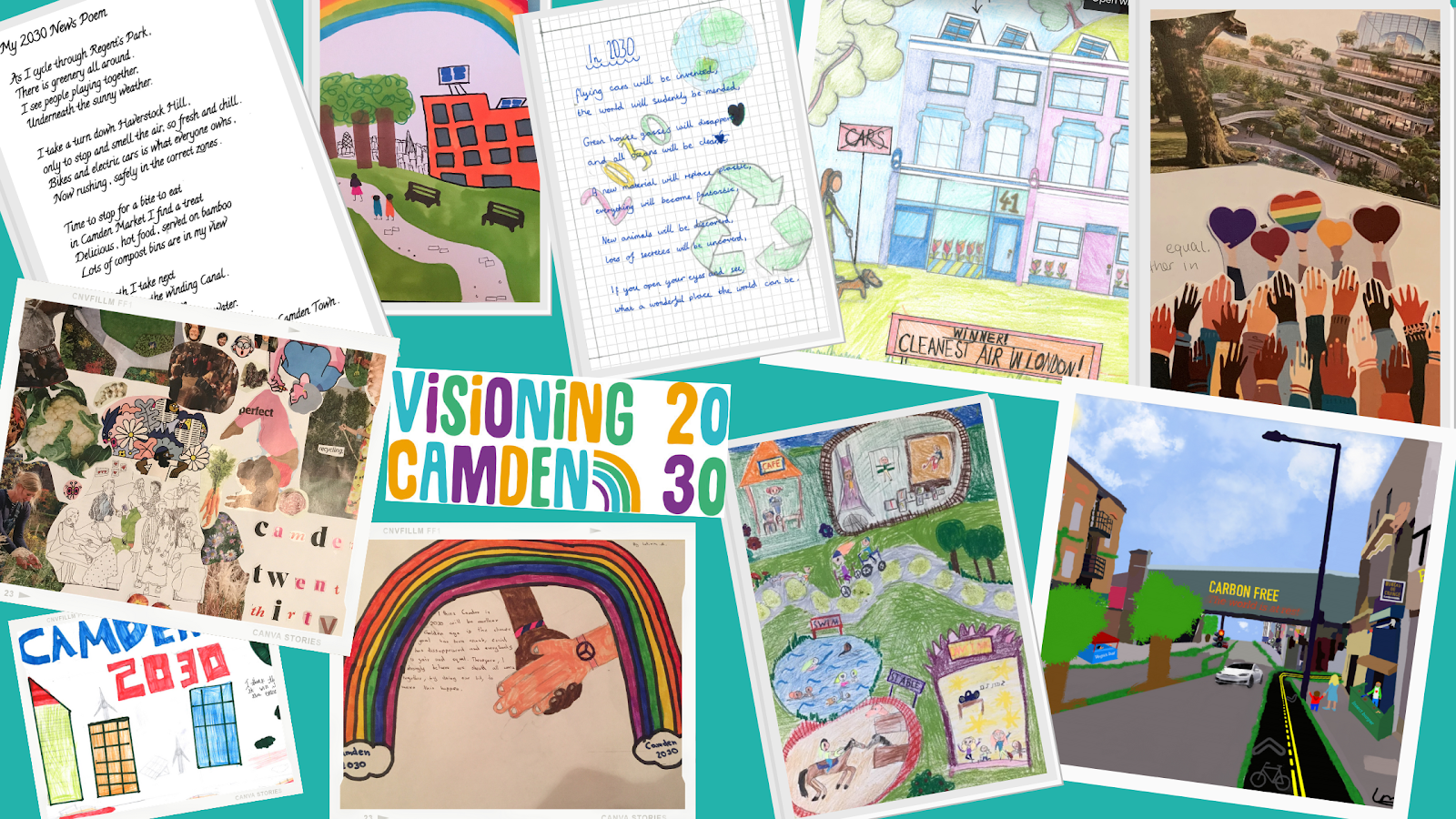 A year ago we shared with you the story of the Camden Think & Do, the amazing community-led What If space created by Transition Kentish Town (TKT) in partnership with other community organisations.  This is the story of what they did next, the tale of the Camden Future Journal.

It’s a great time to tell it, because one of the highlights of the What Next Summit which started this week is a session called ‘Reaching beyond the usual suspects: community action for everyone‘, which will feature TKT’s Debbie Bourne talking more about it. To find out more, I spoke to Debbie and to Habiba Nabutu, both of whom were central to the creation of the Journal.

Could you tell us the story of how the Camden Future Journal came about, and what you were trying to achieve?

Debbie: One of my fave things to do is flick through a certain book called ‘From What Is to What If’, and see which page I land open on! What is… the inspiration I might take from that page? On a balmy day last summer when my thoughts started to turn towards a dreaded winter of more lockdowns & Covid mutations, I flicked through the book and landed on p170. My eyes alighted upon a paragraph visualising a newspaper written from the future.

Aha, I thought… What if… we would persuade our local newspaper, the Camden New Journal (CNJ), to publish a wraparound containing community visions and stories written from the year 2030, and publish it in the first week of Jan 2021? What if the CNJ could look exactly like it does now, and readers initially wouldn’t realise they were reading an issue written from the year 2030 once we have addressed the issues of climate and social inequality? Wouldn’t this be a playful, positive way to start the year?

Our Transition group approached other local sustainability groups: Think&Do Camden, Camden Friends of the Earth, Power Up North London, Vegbox.org.uk, Climate Emergency Camden, and we approached the CNJ. We agreed a price that we felt between us all we could raise, and that ethically was ok (i.e. was this the right use of money?).

The Camden New Journal were fantastic and very much involved in the whole process. We had the most wonderful surprise when we opened our copy of our Camden Future Journal on January 7th 2021 to find that the CNJ had turned the WHOLE issue over to going green. 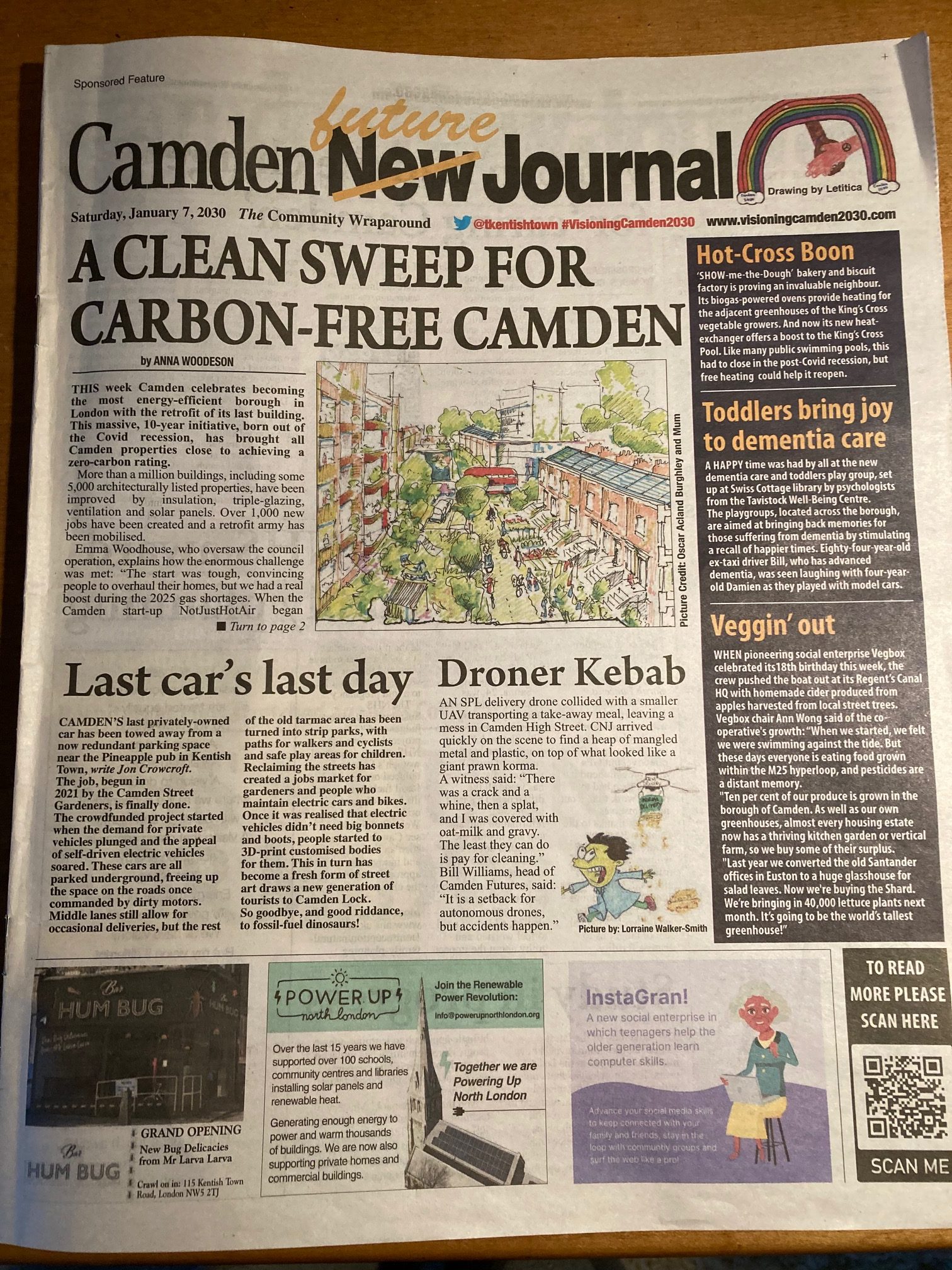 What we were trying to achieve with our Camden Future Journal was basically to cheer people up, and to inspire them to action. As you say Rob, we can’t make the future happen unless we can imagine it first.

The diversity of voices in it is really striking. From international lawyers to schoolkids, and people from many different parts of the community. How did you achieve this? How did you seek out such diverse representation?

Habiba: We work with diverse groups of people and diverse ideas. We have been building relationships with local groups, schools, the council and businesses over the last three years. We also can’t impose what we want on people, so we have got better at asking people what they want to do and then looking for shared values and then working together. Being interested in other people’s contributions has meant that we let go of our own agendas and co-create agendas based on shared values.

Debbie: The first thing we did was to convene a diverse editorial group to steer the project. We realised that in order to reach ‘beyond the normal suspects’ and have every CNJ reader who read our wraparound feel like it was talking to them, we needed to broaden the appeal. The narrative had to be about social justice, as much as climate justice. 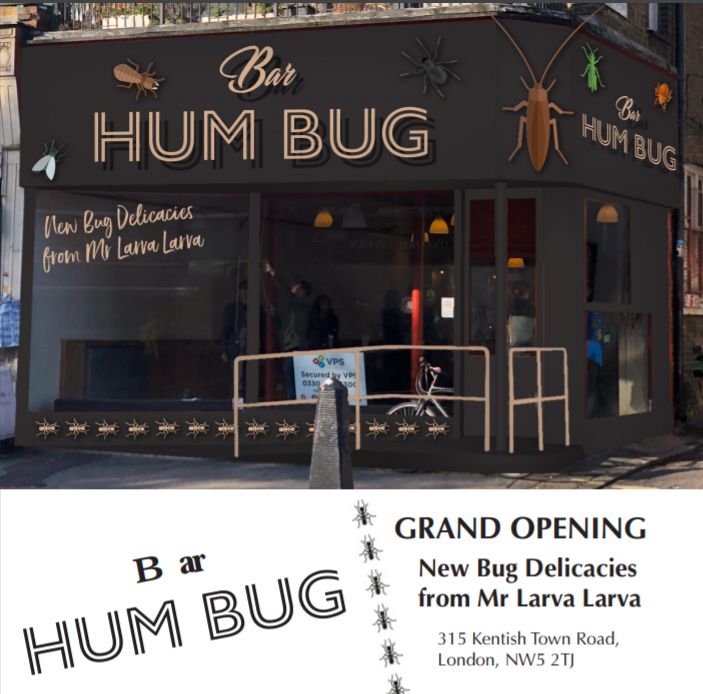 The imagined ‘Hum Bug’, the restaurant service insects-based food by 2030. I love that the chef is called ‘Mr Larvae Larvae’….

The formation of this editorial steering group was so important as it enabled us to connect much more widely across the borough with other local groups such as Hopscotch Women’s Centre, Refugee Community Kitchen, Cooperation Town, Camden People’s Theatre and Global Generation.

We also worked incredibly hard marketing the project. It really was 3 backbreaking months’ work. We contacted loads of different local groups asking for their visions. We embarked upon a big social media campaign teasing people with provocations: How would we treat the poorest and most disadvantaged in our communities? What kind of education will you be receiving or giving? 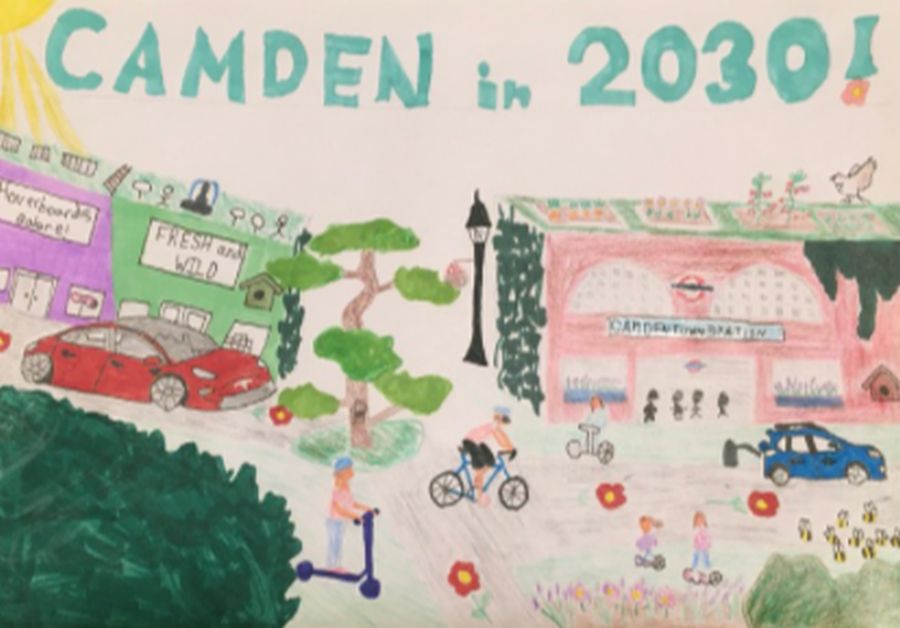 In terms of schools (a big part of our outreach), we had around 155 entries from students from 9 schools.

Part of the resource for this came through the Transition Bounce Forward seed funding. How did that help, and what did it make possible?

Debbie: The TBF seed funding completely got the ball rolling. This first £500 made everything suddenly seem possible.  All our groups all chipped in what we could. It was so wonderful to see groups who were offshoots of Transition Kentish Town: Vegbox.org.uk and Power Up North London contribute. We then approached a local business; Alara Wholefoods (Alex Smith has been a sustainability leader for years – he is a genuine local hero). Alara donated £1,000. When then raised the final £1,500 by crowd funder. It was great to see local residents donating anything from a fiver to £200.

What kind of reception has the Journal had?

Debbie: The Future Journal had a fantastic response. The CNJ editorial team were incredibly happy. From our monitoring of CNJ on Twitter, we think this project had their biggest response in years. We also had some wonderful feedback from around the country.

Camden Council who we work closely with (but who did not contribute) were very excited about the project. So much so that one department is giving us some money to create and build a portable exhibition to tour the borough as part of their ‘We Make Camden’ campaign. 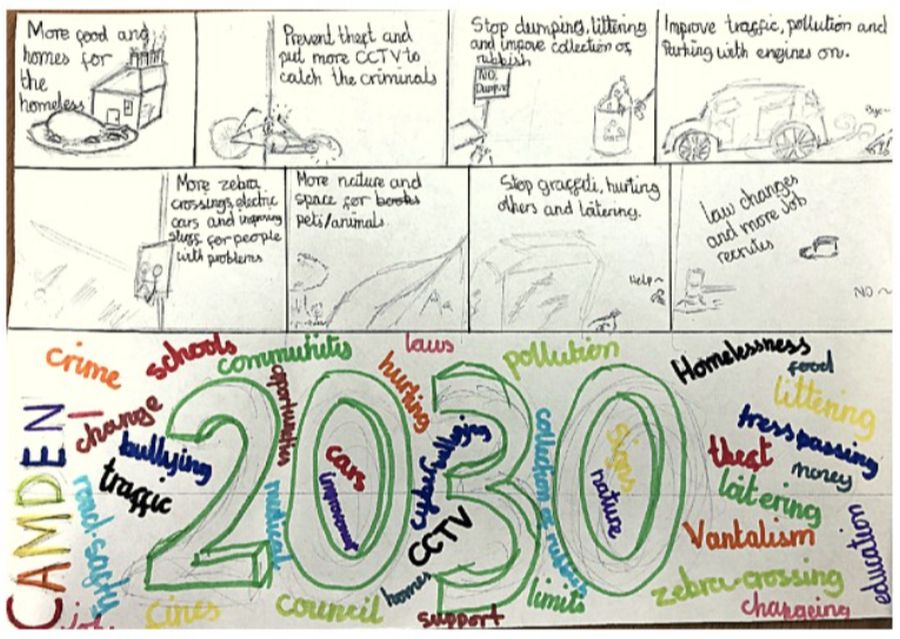 What are your hopes for what comes next for Visioning Camden 2030?

Habiba: Our hopes are that we build a broad and diverse coalition of people and groups all contributing towards a more equitable Camden that meets people’s needs within planetary boundaries.

Debbie: Another lovely outcome is that many of the groups who put the wrap together or shared their visions have now unofficially formed one big happy eco-system-family. ‘VCCamden2030’ has formed 2 new groups:

Our Think & Do group is also busily starting to plan a series of summer pop ups – with the particular emphasis on working with Tenants and Residents’ Associations (TRAs) on housing estates. What if… all VC2030 entries could be displayed in TRA halls around the borough…?

(Digital Flipbook with all entries to the Camden Future Journal)

What do you think this What If, imagination-based approach has brought to your activism that wasn’t there before?

Habiba: There are two things, firstly it has made the possibilities visible.  There are alternative ideas, thinking and ways of being that are more equitable and don’t destroy the planet.  Secondly it has also made our interdependence visible.  Social, political, economic issues are all part of addressing the ecological crisis. 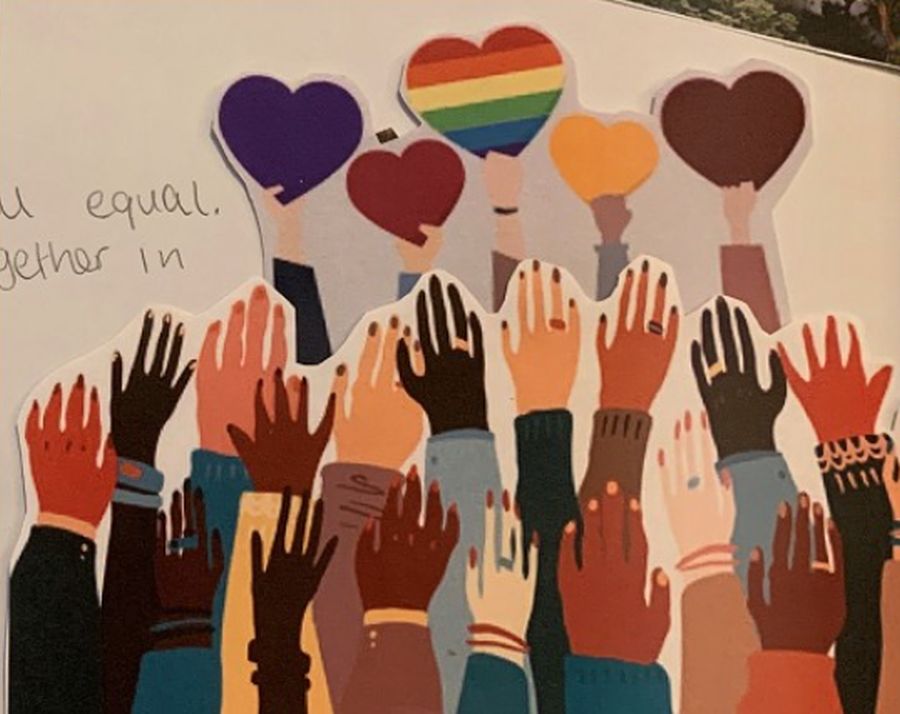 We don’t have to choose between renewable energy or retrofitting, we need to do it all.  We need a focus on participatory democracy, economy, businesses, public sector, etc.  It doesn’t matter where people are working, wherever people are, they can contribute to visioning the future.  Thirdly, it can be fun, playful and creative.  The poems were some of the most moving pieces.  There was playfulness in some of the articles. It doesn’t have to be all serious.

What advice would you have for other groups inspired and wanting to do something similar?

Habiba: Don’t wait for perfection – good enough is great.  Welcome all media: pictures; poetry; films; whatever people want to use and can be shared. Involve kids and young people but don’t leave it to just them, the responsibility for the future is for all of us. We would say that it’s not about putting on a ‘positive’ spin on things.

Some things are difficult or painful but they need to be included because that’s real life. Aim for as much diversity as possible but don’t let it paralyse you from acting.  We didn’t get it perfect, it’s a work in progress.

Debbie:  It really was a huge amount of work to put this together. Don’t underestimate it. But it was totally worth it. It really was quite emotional when it was published.

There were lots of different opinions amongst us all on the amount of space to be given over to poetry, and kids entries versus the incredibly important climate and social issues that we had the opportunity to feature. We are Transition-Towners, not magazine publishers, and our lack of experience showed!

We are also not graphic layout artists. The CNJ kindly allowed one of their layout editors to do the layout – without this, the end product would have been nowhere near as good. 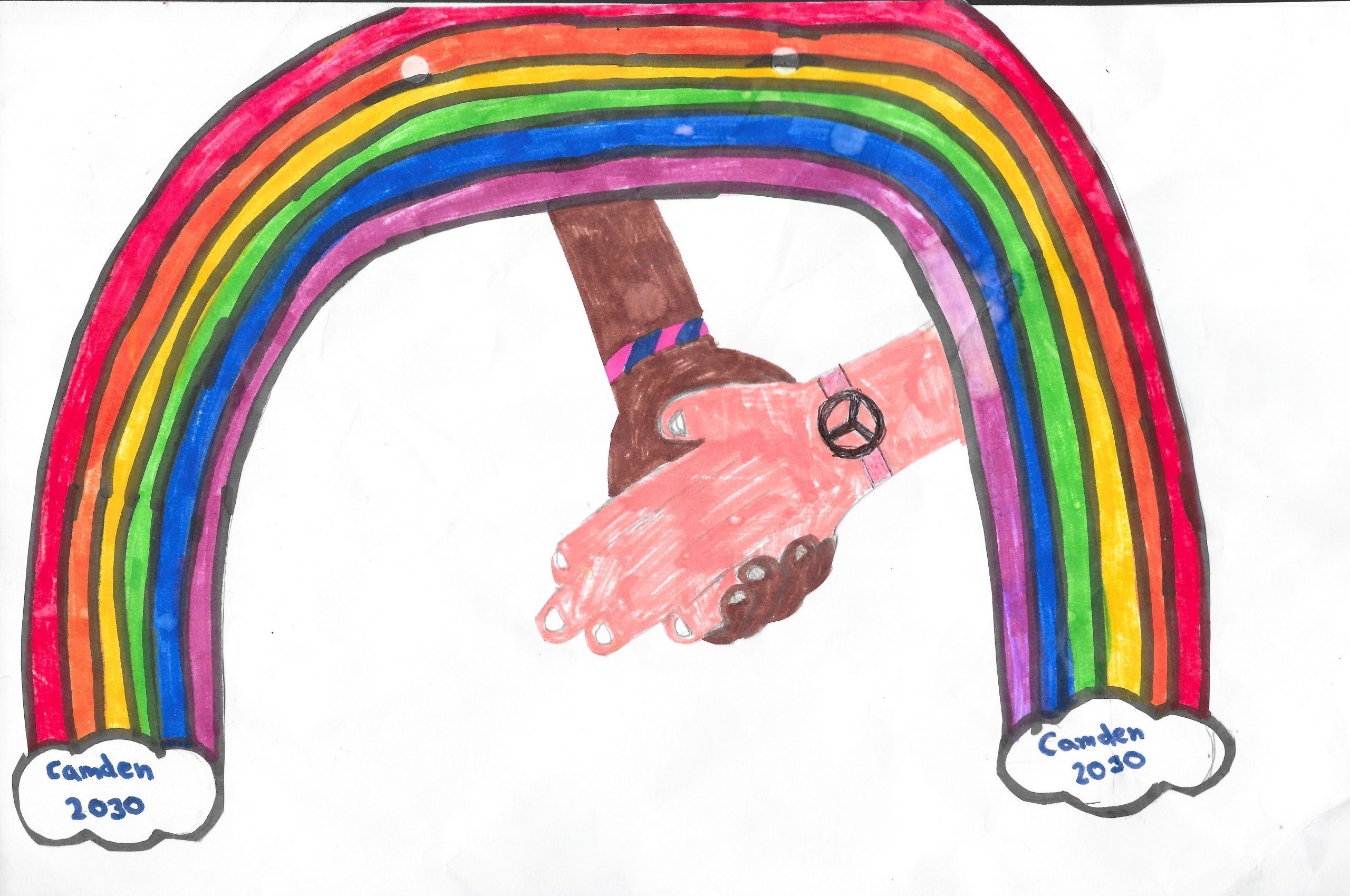 We are going to make available a digital version of our four-page wrapround, with the name Camden removed. If any group reading this thinks this could be of use to them, get in touch. Our main advice is to just do it.

Our CNJ wrap reached 60,000 Camdeners. At the follow up public meeting there were just under 40 people there. Some might be surprised that there weren’t at least triple the amount of people there, but we all know that the kind of wonderful, inspiring, hopeful campaigning and visioning work we do is a slow build. It’s one conversation at time. One action at a time. A slow build until we reach critical mass.

What we can tell you is that we are having some wonderful individual conversations. Here’s an example: Last week an email came in from a secondary school in Camden. Kate Stockings, head of geography at Hampstead School, read the wrap, and has now designed a learning module for year 7 pupils based on it:

‘What if the stories in this wrap came to pass? How could we make this happen?’ *

Thanks to TBF funding we have had 600 copies of the wrap printed and were able to supply her 60 of these as a ‘valuable school resource.’

What if… this Year 7 learning resource was offered to all schools in LB Camden, and beyond…?  What if it became part of the year 7 curriculum?!

Camden Council sustainability department have now decided they are going suggest just this. How great is that?!

Final message from Habiba and Debbie:

Pick up Rob’s book and flick through it now! What little nugget of wisdom do you land on? What Next…?

*This learning module for Year 7/8 pupils is now an open resource – https://www.katestockings.com/classroom-resources

The Tale of the Camden Think & Do

The declarations of ‘climate emergency’ by almos...