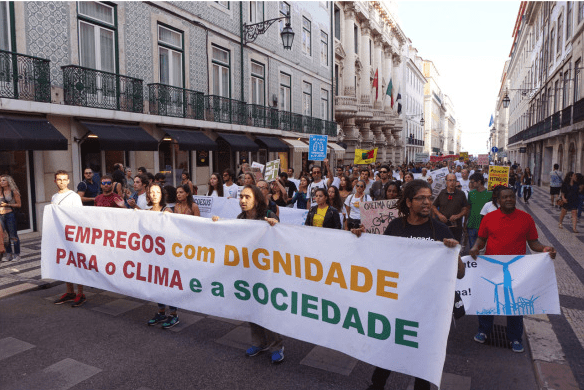 In our ongoing series of blogs from Kevin Buckland, our final Guest Editor, we hear about collaborating with unions and workers to reduce emissions and create dignified and sustainable jobs.

At the 4th Eco-socialist Conference in an aging high school in central Lisbon, I sat down with Joao , one of the conference organizers and member of the Portuguese climate group Climáximo, to talk about the exciting work underway around Climáximo’s Climate Jobs Campaign.

As autumn leaves fell from the ancient trees around us, we talked about the role of labor and unions in ecological transitions, how movements can engage with them, and what such collaborations could mean for making deep emissions cuts a reality.

Kevin: Hello Joao, first of all. Thank you for agreeing to meet with me. I was hoping you could tell us a little bit about Climáximo’s Climate Jobs Campaign, how it started and why you think it’s strategic?

Joao: No problem. We started this climate jobs campaign about 3 years ago. At that time we had some people coming over from the UK, where they were running a campaign there, they were based more on unions but we approached them not from a unions standpoint but as a Climate Justice Movement. We thought this could be strategically and politically very relevant because it opened up a series of new possibilities for strategic alliances around a very clear political program in which climate change can be framed not only as potential catastrophe but as a huge opportunity. This is partially how capitalism is framing climate change anyway, as a huge new opportunity to make profits on the collapse, anywhere from the lowering of standards on oil extraction or agricultural production, lowering the value of land for land grabs, and so on. But we want to use [this narrative] the other way around, saying: “This is the greatest challenge civilization has ever faced.” So when they say “If you want to save the climate it will destroy millions or billions of jobs!” we call bullshit and say “It means more jobs than ever!”.

Kevin: What do you see as the main difference to the approach Climáximo is taking with this narrative, in contrast to the climate narrative of capitalism?

Joao:  The main difference is the objective. The goal of these jobs will not be [just] the jobs in themselves – or the wages, but rather what these jobs produce. So we decided to put up the idea of jobs where the main objective is to cut greenhouse gas emissions. The main focus at the moment is mitigation, especially in the global north. In Portugal, we think the issue of mitigation is very important because there is already a more diversified energy mix than other EU countries. Although, it’s all private – the fossil fuels and the renewables and the hydropower. And then eventually we plan to work on adaptation as well, we need to imagine will need to be moved 10 or 20 kilometers inland – that’s a lot of work!

The objective would be to effectively cut emissions and to prepare workers in the highest polluting emissions sectors to be in the frontline for new jobs.

Kevin: So in the context of looking beyond just the vague promise of ’jobs’ and towards what those jobs are producing. How do you differentiate between climate jobs and other ‘jobs’?

Joao: We define the main axis of how we define climate jobs – and this is a purely political decision – we would want them to be public or socially owned. (Though being run by the state does not automatically mean that it’s good). They would need to be new jobs, so it isn’t talking about putting a label on jobs that already exist. It has to effectively cut greenhouse gas emissions and would be dignified jobs, with a work contract – not precarious work or temp-agencies or any of these. The objective would be to effectively cut emissions and to prepare workers in the highest polluting emissions sectors to be in the frontline for new jobs.

Kevin: This sounds great, but what would this actually look like for a country such as Portugal?

Kevin: Can you tell me a little bit about your organizing around this? Who you work with and what alliances you have made?

Joao: Our partner in this is the main union confederation in Portugal called CGTP, and with this comes some difficulties of course. There are some unions who are much more interested in the campaign than others. For example, the teacher’s unions are working very closely with us on this. Also, we’ve had a very concrete experience with a union of workers in a coal power plant in Sines that has been threatened with closure for about 10 years now. This single power station is responsible for 12% of greenhouse gas emissions of Portugal, so it is a worthwhile alliance.  We got in contact with them because they know they are going to be closed and they want to talk about “What are we going to do next?” I think this is a good approach to climate jobs in other sectors because you may be a worker in a refinery or on a platform or on extraction for gas – but you read the news and you know a lot of people are saying your job is going to hell. You have two possible approaches – the first one is Donald Trump who says he is going to save the coal miners in the US, and there is a lot of support on that. But he is going to save the mines; we don’t want to save the mines, we want to save the workers. So what we are saying is: “let’s get together and talk about what we can do”.

Kevin: What do you think that this Climate Jobs frame offered the climate justice movement? How can this be useful?

Joao: I think this is a huge opportunity and that the climate jobs campaign could be “the tool”. Of course, I won’t prescribe the same model for every country. For it’s been a hugely beneficial experience to be talking to people all around the world, and to promote the debates within unions and within academia. Now we have people who are doing studies about, for example with this coal power plant, what would happen with our national energy supply if it shut down today – what would tomorrow be like? So we are getting both political and technical information that is useful for us to make a case for a just and progressive transition that could lure the debate far away from the threat and the fear mongering of right-wing rhetoric. [We are pushing the debate from the] fear of immigrants taking our jobs etc, into “we don’t enough people for all the jobs we need to do”.

Kevin: Could you say about what the early work with the unions and confederation was? Any learnings from the early steps?

Joao: The first thing was not to come in with a closed plan or everything strictly forbidden. First, it was about defining, with them, what a climate job is. we decided together, and so the political alliance is based upon the political definition. And then the program is easier to do because then you will go and talk to people in academia who are very interested in this. And they can go through different approaches.

Capitalism is also telling industry and academia that there will be energy transition. But they are going push it to the brink of collapse. Their ecological transition is, I think, an economic collapse for most economies and we want to propose something that is not economic and ecological collapse. So I think approach with an open mind, but be clear about what the objective must be. And then find your first alliances; usually teachers, journalists, public transportation can be quite open to discussing this. Then you need to start going for concrete cases and trying to get in touch with mining unions and metallurgic unions – industry unions in general. Then it will depend on union strength in which country, which is usually industry. Now we have different unions in the organization, like call-centers unions and precarious workers organizations. We are in a hurry, but there are different timings in organizations. So building trust from the beginning is very important but we need to step on the gas, so it’s juggling.

Kevin: Where are things at right now with this work and what is next in your plans?

Joao: Although we have a lot of work done, we are not very public. When we launched our last report there some media echo but we are going to try and push this into political parties programs for this next electoral cycle. It is something already quite present in Labor in the UK for example, and up until we have not had it in Portugal. We will try and push it into at least 1 or 2 political parties and we’ve had some preliminary talks with them. As a political it’s very coherent and the case is very well done – it’s the reply to the economic collapse they claim we want. They say we want to go back to living in caves, our reply is your system will have us living in caves, at best, in 80 years. This [frame] could give us an idea of “the plan”, but we need to start thinking about the way economies run based not on some ideologically capitalist charged focus on public debt and deficits. But if they want to use that language there is only one budget we need to worry about at this moment – which is the carbon budget.