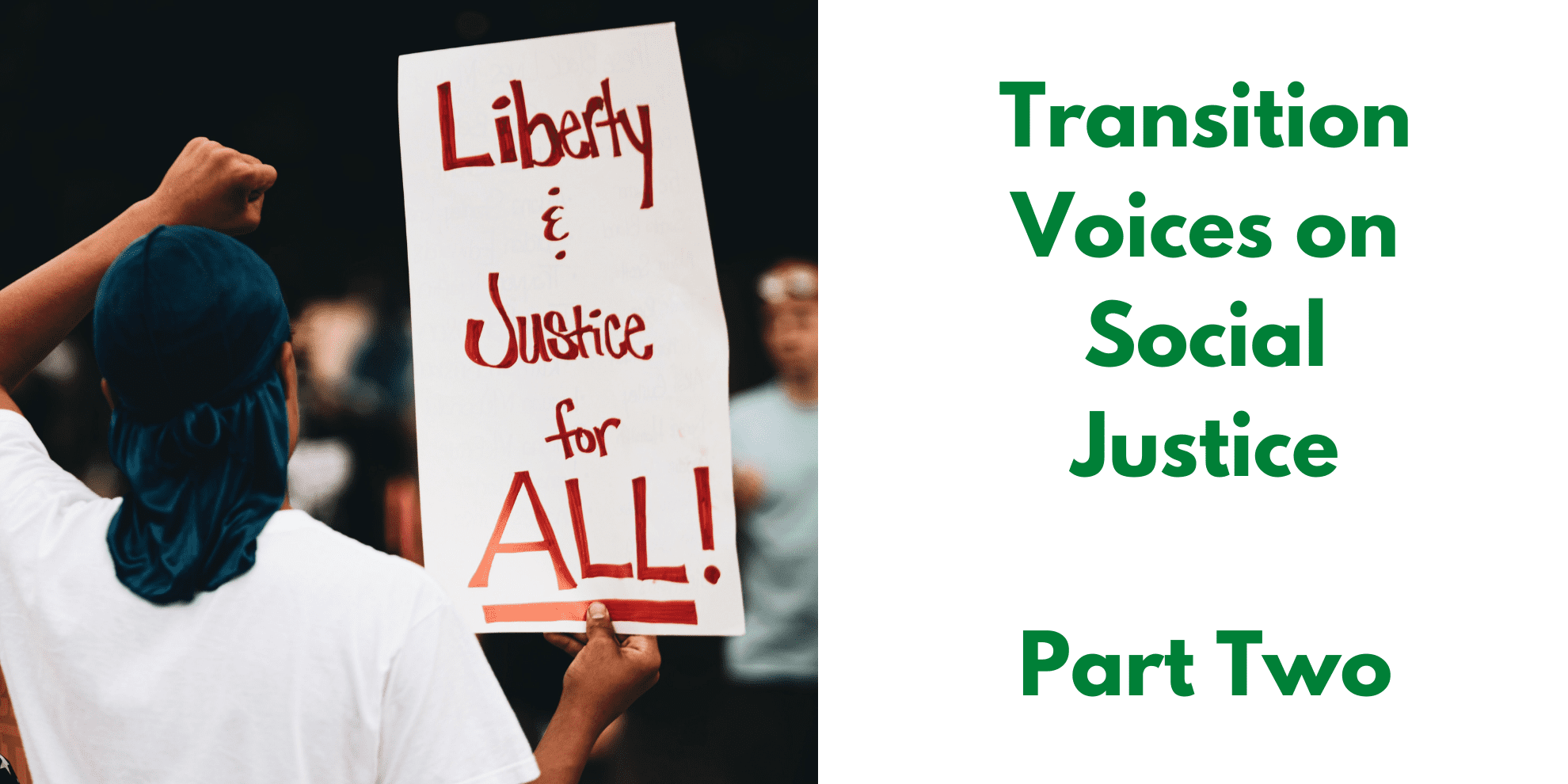 We’re very grateful to Abigail and Landets Fria Tidning that we can share with you the full length interviews here, over three parts.

In this interview we hear from Nick Anim of Transition Town Brixton & Transition: Bounce Forward.

Nick Anim’s PhD thesis “Green, but mostly white” is about why Transition and other environmental movements are mostly white. As part of his research he interviewed black and brown people in Brixton in London about why they weren’t joining Transition groups. 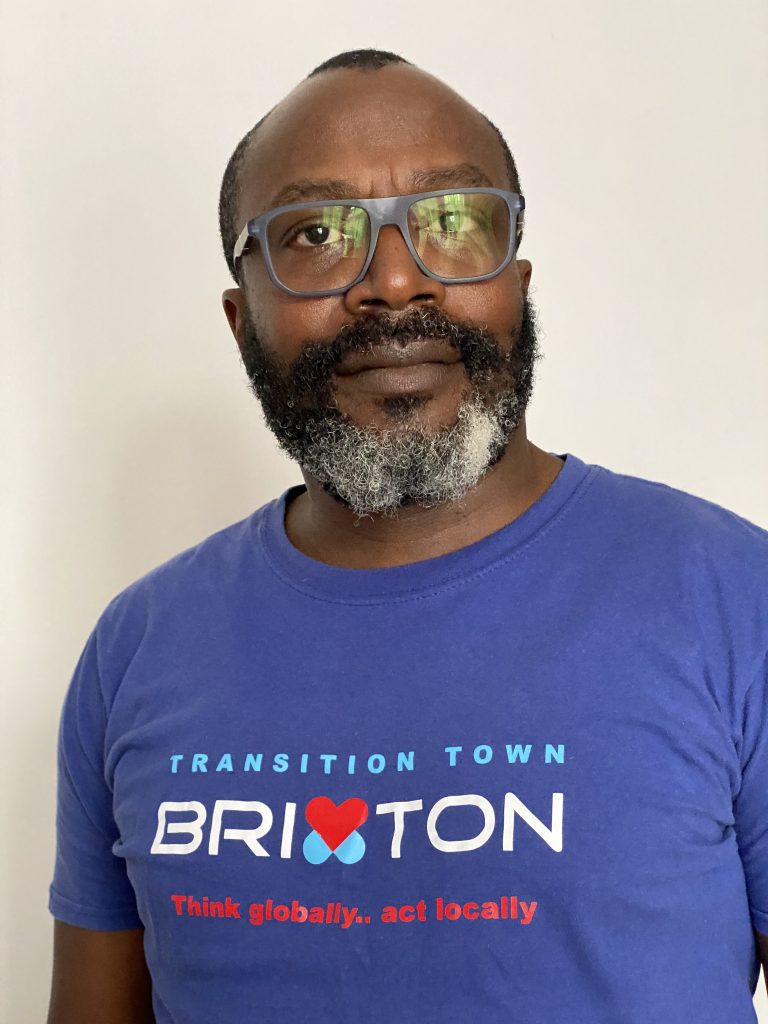 “We as a movement will not succeed unless we take justice seriously”, says Nick Anim, inclusion and diversity strategy advisor for Transition: Bounce Forward and director of Transition Town Brixton. Photo: Private

“People kept saying “we’ve got bigger fish to fry”. I found what I call a blockchain of inequalities of concern to black and brown people, that persist over time.”
The key concerns for these groups were education, police and criminal justice systems, housing, health and employment. Nick Anim also found that many black and brown people saw the environmental movement as elitist and as working for changes that would only benefit middle-class white people. “Of course, that’s not the case.”

While most black and brown people in Brixton hadn’t heard of Transition Town Brixton, there was more engagement with its specific initiatives in food, local currency and energy production.

“It comes down to how initiatives engage directly with the needs and experiences of people. You can’t get people to join unless you address their primary concerns.”

Nick Anim also says that it’s not enough to open the doors to your own spaces. If they look in and see a lot of white faces they may not feel comfortable coming in. Instead, you have to meet people where they are – churches, mosques, hairdressers, cafés…

“Go in with honesty and humility, talk to people, and listen listen listen to their concerns. Once you start addressing social justice, over time you will get people to trust you.”

Nick Anim emphasises that social justice was one of the Transition movement’s primary concerns from the start, and that diversity is one of the permaculture principles out of which Transition was born. However, he feels that the approach used to be fairly passive.

Why is diversity in Transition groups and initiatives important?

“1. Legitimacy. How legitimate is our initiative if we don’t have diverse voices? This is a very serious question. If we’re seen as illegitimate, our effects won’t be as widespread. There’s also the issue of elitism, that what we are pursuing will only benefit one group. Some black people will see our work as upholding the system of inequality, so why should they join?”

“2. A lot of research shows that businesses with more diverse employees are more resilient and innovative. If you have a homogenous group, you will come up with the same solutions. Diversity offers a wealth of perspectives and helps us become resilient in the long term.”

“Always ask provocative questions, like why does diversity, inclusion and social justice matter to you? What do you understand community to be? My point of departure is Martin Luther King’s assertion that “Injustice anywhere is a threat to justice everywhere”. Once you understand why diversity, inclusion and social justice should matter, I think any initiative will stand a greater chance of prospering.”

“Build coalitions with groups that are working for social justice. Support and celebrate them when they need support. One example is after school clubs, which can use our networks or spaces”, says Nick Anim.

Nick Anim points out that some issues of social justice like the police and criminal justice system and health can feel too big for Transition groups to address. However, others do try to work on employment, education or housing. Social justice also ties in with inner transition and wellbeing.

In terms of the bigger issues, Transition groups can build bridges to local governments. Nick Anim describes the local project nights that Transition Town Brixton has once a week as one example.

“It’s a space for anyone in the community to come in and talk about their concerns. We can take those concerns to the council to address them, and so we can argue that Transition helps foster greater local democracy. This is where Transition comes into its own.”

“There is considerable opinion that issues of social justice shouldn’t be in the environmental movement because they’re so contested, that Black Lives Matter is a distraction from the main goal. But what people don’t understand, appreciate and empathise with is that for many people, the goal of environmental sustainability can’t be achieved without addressing issues of justice now. We as a movement will not succeed unless we take justice seriously.”

“These are the challenging and difficult conversations we don’t have enough of because they are challenging, difficult and messy. But we have to recognise our own part in perpetuating the system. If you don’t care for another human being, what is the point of life?” says Nick Anim.

An interview with Sarah McAdam of Transition Network