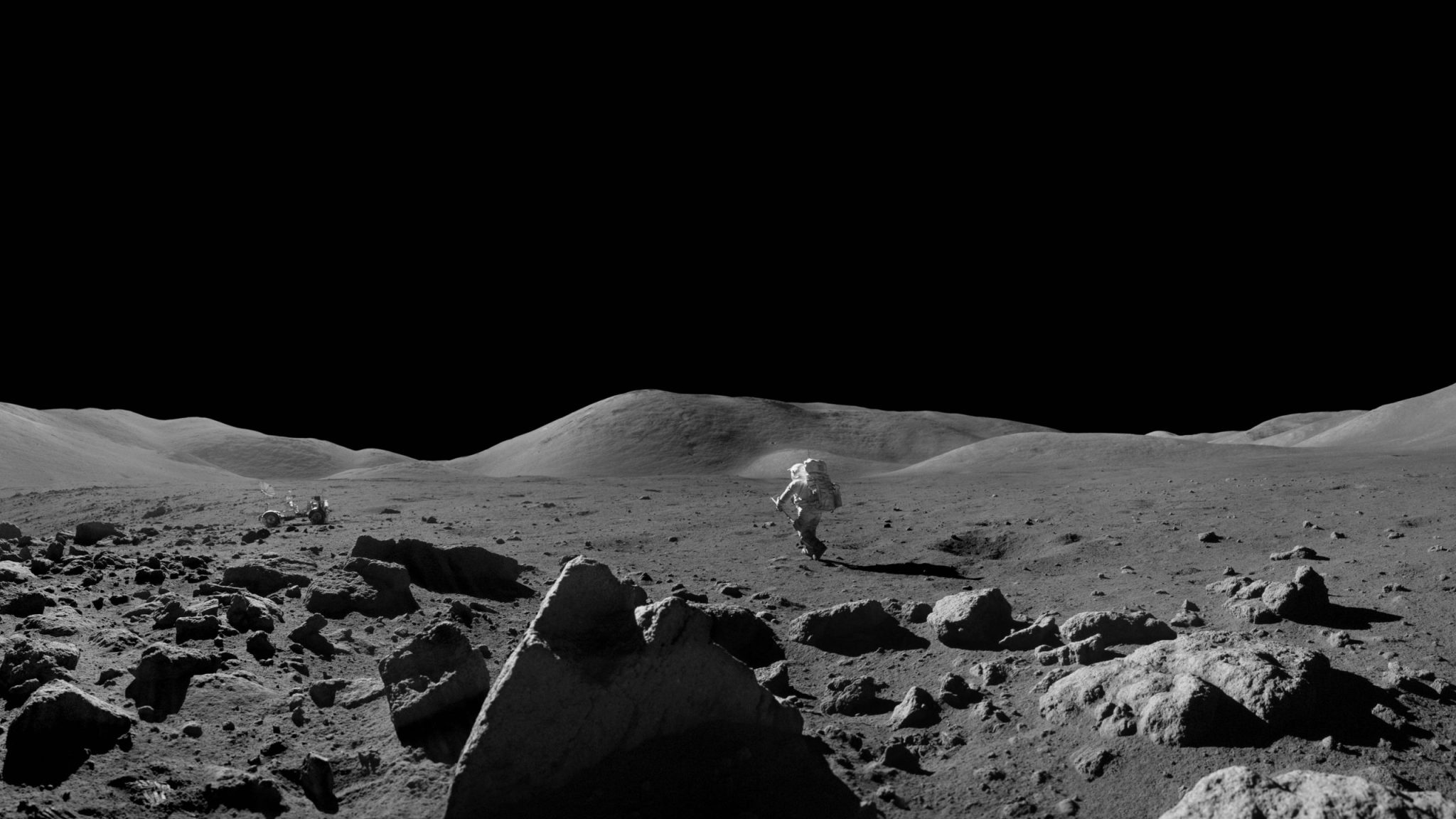 I spent most of this festive break on the Moon. I wandered amongst its vast craters, scaled its gently curving hills to get better views, sat on top of Moon boulders, left my footprints upon its fine grey dust. I sat and watched the Earth rise from behind the horizon, a green and blue marble some 250,000 miles away. I sketched, I wrote, I dreamed. It was breathtakingly beautiful, and hauntingly lonely. At night, before I fell asleep in the small craft that got me there, I would look out at the stars through the window and dream of what it might feel like to sleep on some of the other moons in our solar system too.

It might seem like an irresponsible and selfish thing to do, to set off to our nearest celestial body at a time when everything is unravelling, the skies of Australia are turning orange and the minds of the damaged inner children of the world’s most powerful men are once again turning to war. But since that night of the Election, I haven’t been able to look at the news, not once. Having been so immersed in obsessing over every detail of the news for months, the body blow of the result, and the overwhelming feeling of grief it generated in every cell in my body, meant that I needed, more than anything, my time wandering on the Moon.

I don’t feel bad about it. Sometimes we need to turn the chatter off, to disconnect. I’ve been reading Jenny Odell’s brilliant book ‘How to Do Nothing’. In it she writes of the need in our lives to balance contemplation and participation. She writes of how our time on social media “so often feels like firecrackers setting off other firecrackers in a very small room that soon gets filled with smoke”, and how “we need distance and time to be functional enough to do or think anything meaningful at all”.

She quotes William Dersiewicz who told an audience of college students in 2010 that by living a life online and barraged by news media,

“[you] are marinating yourself in the conventional wisdom. In other people’s reality: for others, not for yourself. You are creating a cacophony in which it is impossible to hear your own voice, whether it’s yourself you’re thinking about or anything else”.

And so, I went to the Moon. Well actually, of course, I didn’t actually physically go to the Moon, as you’ve probably figured by now. But I did mentally spend a lot of time there. It was partly due to being bought for Christmas the most hauntingly beautiful record, by Hannah Peel, called ‘The Moon is there in all its splendour’, which you can hear here:

It was also because I obsessively listened, over the break, to a podcast by BBC World Service, called ’13 Minutes to the Moon’. It is a compulsively fascinating listen which tells the whole story of the Apollo 11 mission, and focuses in particular on the 13 minutes of the lunar module’s descent to the surface of the Moon, and all the different ways during that time that the whole mission nearly went wrong and had to be aborted.

It introduced all the characters you hear in the recording, and what they were talking about so that, in the final episode, they played that whole 13 minute recording and you could actually understand what’s happening. As I walked my dog in the December rain, I was held, absorbed, flying above the surface of the Moon squeezed into the lunar module alongside Neil Armstrong and Buzz Aldrin.

I returned from my time there with some thoughts, some reflections, which I hope will prove useful in the battles that lie ahead, in the ongoing uphill push to wrestle our future back from insane men who feel it is OK to dash headlong into creating the conditions in which we no longer have one. And a future that could be so, so beautiful.

My first reflection was that at Mission Control, in that room full of people behind monitors we know from every film we’ve ever seen about the moon landings, the average age was 26. 26. Many of those people were straight out of university. As Gene Kranz, the mission’s Flight Director put it, “they’d never experienced failure, so they had no fear”. After a year when young people have filled the streets around the world, and after an election that kicked their hopes and fears into the long grass, I feel like the role of our movements and our activism needs to be to support and involve young people as much as possible. Like Apollo 11, it is clear that were we to hand the reigns over to them at this point, they would do an infinitely better job than those currently in control.

The second was that while the Moon landings were a remarkable feat of technological achievement, they were preceded a remarkable feat of storytelling. As Muhammad Yunus describes it in the film ‘Apres Demain’, before we actually went to the Moon, many people wrote books, made films, wrote songs about going to the Moon. By the time we actually went to the Moon, everyone had already been there many times, in stories. “That idea captured the minds of everybody, all the generations. Finally, we went to the Moon … science always followed the science fiction” he says.

The act of telling the stories of what a low carbon future would look like, smell like, sound like, is a vital part of our work now. It is part of the reason why the Swedish government recently created the job of ‘Chief Storyteller’, a job given to Per Grankvist, whose job description is “to communicate the realities of day-to-day living in a carbon-neutral world”. The world needs an awful lot more Per Grankvists.

The Apollo missions also worked because there was a shared sense of purpose, begun with President Kennedy’s “we choose to go to the Moon” speech in 1962. He set a hugely ambitious goal to land a crew on the Moon and return them safely to Earth before the end of the decade. He made it clear that this wouldn’t be easy, and that at the time he gave his speech, it was still technically unfeasible. But he made it clear that within less than 10 years, it would be done. He acknowledged that it would be difficult, but that nevertheless it would be done. He created a North Star, a deep longing, and he resourced it.

While it is clear that, in 2020, we will not see such a call in relation to creating a carbon-neutral future coming from the governments of the UK or the US, it can come from the leaders of cities, towns, regions, organisations, businesses. It can come from communities. It can come from every conversation we have. Whilst we won’t be hearing Boris Johnson making such a speech anytime soon, we can make sure it is coming from every other level with passion, commitment, guts and integrity.

It was also clear that education played a huge role in producing that generation of young people for whom the idea that we could get to the Moon was something that felt entirely possible. At the moment, do we have an education system that is inspiring young people with possibilities, firing their imagination, and nurturing them to believe that they are the ones who can make a carbon-neutral future a reality? We do not, and that needs urgently to change.

Another important observation about the Apollo missions was that when the idea was first mooted, although no doubt there were people at the time who said it was impossible and that it wouldn’t work, that didn’t become the over-riding narrative. I worry that in much of our work around climate change, we start with assuming that it’s too late, that it’s technologically too complicated, and that it’ll be too costly, shooting ourselves in the foot before we even begin. There were no ‘We’re Fucked’ placards in Mission Control.

But the final, and perhaps most important thought that played through my mind as I sat there on the Moon over the last couple of weeks was about how getting there changed us. Every astronaut I’ve heard who went to the Moon spoke about how the experience of seeing the Earth as a tiny ball amidst the vast expanse of space profoundly changed them. As one put it, “we found a new way to look at the Earth”. Whilst the creation of a carbon-neutral, more resilient, connected and delightful future will be full of challenges and setbacks, and moments when it will feel like it’s not going to happen, were we to actually make it, how will that process have changed us?

What if we were, via an act of time travel every bit as fantastical as my Yuletide Moon adventure, to meet our 2030 selves from a time that has achieved a remarkable, profound and, in 2020, unimaginable social, economic and ecological transition? What would our future-selves have to say? How would they have been changed in ways that in 2020 they couldn’t even have conceived?

The process of bringing about such deep change, of having reimagined and rebuilt everything, of having brought people together and created a more just and equal world with a shared sense of purpose, of having begun the regeneration and  the rewilding and ecological restoration of the Earth, of now living as part of the complexity of life on earth rather than in opposition to it – we will be profoundly different, wiser, more imaginative, more compassionate, more resilient. It will feel every bit as remarkable as landing people on the Moon.

What we will have achieved will be a work, to borrow from the title of Hannah Peel’s track, of splendour.  As I return home to this beautiful planet, still staggeringly beautiful in spite of its many ills, it is my wish that this will come to be remembered as the decade of splendour. Let us make it so.

Why the Climate Emergency needs a National Imagination Act